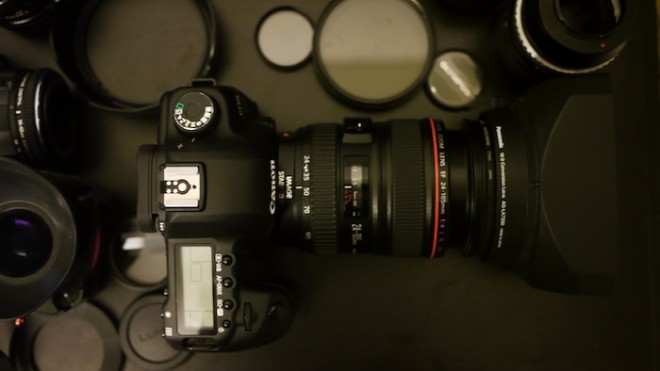 This is really tumbling now. I think there has been around 4 price drops in the last week on the 5D Mark II. Now it is at $1999 for the first time. That is cheaper than some 2nd hand bodies on eBay.

Nikon and Sony are gearing up to launch their next full frame DSLRs around March in 2012 (coincidentally the release date of the 1D X). So it certainly seems the long awaited 5D Mk 3 is not that far off now. Expect to see DIGIC 5 and fixed moire & aliasing, but probably little else – and the risk of a rather crowded sensor to compete with the 34MP Nikon D800 and Sony A99 which are expected to share the same sensor.

The original 5D Mark II is old but remains a great deal especially at this price and if you are interested in outright image quality for stills.

The 5D Mark II doesn’t compete with the GH2 for resolution or image quality on a per-pixel basis (or low light) in video mode, but it does have a very large sensor and therefore has some pretty unique purposes. With a 24mm F1.4L it is like no-other and not a single alternative camera & lens can give you that much depth of field control at wide angle at 1080/24p. Colour and dynamic range are both extremely good on the 5D Mark II, I always liked the roll off from highlights – that is better than the GH2 – and the stills, it goes without saying, are in a different world to the GH2. It records at 38Mbit which is plentiful but it is not a very advanced codec so footage takes up rather a lot of room compared to AVCHD at the same bitrate.

I really would have both considering how much value you’re getting. I’d use the GH2 for the most part – more manageable DOF so no need to stop down as much, and you will get better low light (with Voigtlander Nokton 25mm F0.95) and again more manageable DOF at fast apertures. I’d also use the GH2 for close ups with fine details, wide angle shots with fine detail and where a lens was necessary (FD or PL) where the 5D Mark II would either not take it or need the mirror removing.

I’d use the 5D Mark II where a faster aperture than F2 at wide angle is needed (the 24mm F1.4L) and for shots where there are a lot of bright highlights which would halo or not roll off as smoothly on the GH2. I’d also use it for Asian and African-American skin tones, and sunsets since it does a better job with those particular subtle tones and gradations than the GH2. In an underexposed scene with a ton of shadows, and separately, for when dynamic range is critical and a perfect exposure is required I’d again use the 5D Mark II but with Technicolor CineStyle installed. That gives you more leeway and you will never mess exposure up – you practically expose afterwards with that picture profile. The GH2 tends not to do as good a job when you lift the lows in post (deep blacks don’t escape compression even with the hack – oddly) and the available picture profiles are obviously not as flat as CineStyle is.