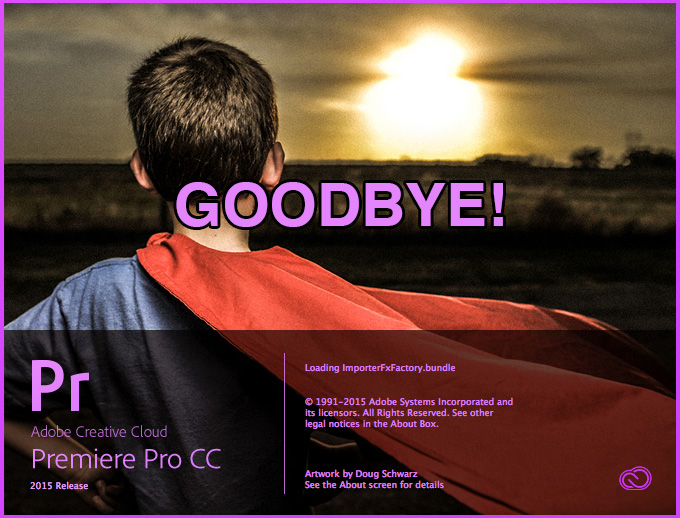 Adobe are sitting on my subscription money, seemingly with their arms crossed.

Blackmagic are bringing DaVinci Resolve 14 to NAB tomorrow and I badly hope the editing side saves my soul.

I have never been more willing to become an ex-Adobe customer.

The company is behaving reprehensibly.

As anybody with a Panasonic GH5 will tell you, Premiere is a mess when it comes to 10bit. It doesn’t support the 10bit H.264 correctly and editing the native files is almost impossible. So you have to resort to proxies and transcoding. Some people are used to this but many just expect to edit the files as they come off the camera, which isn’t too much to ask in 2017.

I am also curious to know from Adobe, when they are going to take reliability seriously and mature their code to the point where Premiere stops crashing on a weekly basis? (It’s been on the market for 15 years).

I’ve had a chronic problem with disappearing playback control keys under the main monitor now for 6 months with the latest version. Before that it was 6 months of crashes at random intervals sometimes 3 or 4 per hour.

“I cannot stand it when companies behave like Adobe has.

“First things first, I contacted them in December when we were shooting our video with the GH5 and tried to get some help on the software side of things.  It took hours to get past the foreign level of customer service…nothing against it, it is what it is.  That level of customer service can’t do shit and we all know it. They recite the FAQ page for the most part.

“Once I finally got to someone that could DO something about the problem, they pretty much said I was out of luck.  So I went the long route, I graded in After Effects, clip by clip.  I viewed “proxies” on the camera to find the in/out points.  I cobbled together a workflow in the time that I had. Now, keep in mind that Adobe HAD, in their possession, 10bit GH5 footage in December.  Footage that they knew they would have to prepare for by the time the camera hit customers.  They also knew what that date would be.

“Fast forward to GH5 ship date and the Adobe workflow is still a complete mess.”

Why couldn’t Adobe work closely with Panasonic to ensure the most popular video editing tool worked properly with one of the most popular (if not THE most popular) mirrorless cameras for video? Months later, Adobe still haven’t updated Premiere and After Effects to properly support the Panasonic GH5 properly.

Yes Adobe, I know what your answer will be. Mac users can edit in ProRes. We can use proxies. Yadda yadda. For this, the best transcoding tool is EditReady, which is made by a company of tiny proportions compared to Adobe yet handles the Panasonic GH5’s 4K 10bit files just fine from inception, with ultra-fast hardware acceleration.

An extra step though it might be, transcoding to ProRes in that is 100% necessary for Mac users wanting to edit in Premiere but for Windows users the situation is worse. ProRes isn’t supported out of the box and most of the popular transcoding apps are freeware solutions like Rocky Mountain Movie Converter (*shudder*). They’re nowhere near the level EditReady is at. EditReady is the best $50 I’ve ever spent.

Sadly I also spend a good proportion of that $50 every month, to prop up Adobe’s subscription model, their unreliable software and their complacency in handling customer support.

My subscription to Premiere is being seriously reconsidered.