Get the 1080p frame grabs here

There’s a large difference in the image from these 3 cameras. See how they compare in this test video.

Later in the video there is also a test of the Contax Zeiss 300mm F4 in Ex-Tele crop mode (1:1 1080p from the centre of the sensor) on the GH2. In this mode you can see into people’s windows from 2 miles away sat on a hillside. It is insane!!

In my opinion unless you really need a full frame sensor the GH2 is still the best ‘DSLR’ to do video on. If only it had the same build and pro-looks as the 5D Mark III it would be taken more seriously. It isn’t a robust camera to throw around or rent out. The articulated screen (that only consumer cameras seem to have embraced) is a must-have though and the image quality is unbelievably good. Incidentally I hear the new 12-35mm X lens from Panasonic will be weather proof which makes me think the GH3 will also somewhat more weather resistant with better build quality – maybe they will find a way to make a water proof hinge, something that Canon felt was not cost effective enough to include on the $3500 5D Mark III.

Now the $1200 Sony NEX 7 – there is a lot to like about this camera but I’ve not used it as much as I have the GH2 simply because the video quality falls short. It is also a bit softer than even the 5D Mark III and has some moire but for the money it offers 1080/60p which none of the other cameras do so you might want to keep one handy for slow-mo. The sensor is also slightly larger than the GH2’s 1.86x crop chip, coming in at 1.5x crop against the mighty full frame 5D Mark III.

In this test the 5D Mark III is using my Cinema Mark III settings from the 5D Mark III Settings Vault. The GH2 is running the EOSHD Unified Patch for ALL-I 88Mbit AVCHD in 24p Cinema mode. The NEX 7 has sharpness dialled down slightly and the Night profile which I find gives very natural results which are true to the eye. With the first shot in the test video the sun was behind a cloud for the NEX 7 so ignore the muddy colour but do notice the resolution gap to the GH2.

Now to get the GH2 looking as soft as the 5D Mark III straight off the card you have to apply a 0.8x pixel radius gaussian blur in post. Here is the GH2 with gaussian blur vs the 5D Mark III with sharpness turned on in-camera but set to a minimum to avoid halos. This gives you an idea of how basic the scaling of its 22MP sensor is and how strong Canon’s optical low pass filter is to avoid aliasing and moire. A very poor show.

The details in the shadows above are almost invisible so lets try grading it and see what we can salvage. Here I brought up the murky shadows to an extreme degree and there is more detail in the lows on the GH2 than the 5D Mark III, which used to be a big weak point of the GH2 prior to the hack.

Dynamic range and a baked in image which can’t be graded very well are often criticisms thrown at the GH2 by pros – but not me. The GH2 stands up astonishingly well to the 5D Mark III here considering the better sensor in the 5D Mark III.

Dynamic range on the NEX 7 is ok but it seems to be shifted quite dramatically to the lows rather than the highs. You can extract far more from the shadows on the NEX 7 and NEX 5N than you can from the highlights.

I’m using the Metabones EF-E-Mount adapter again on the NEX 7 as it was returned to me fully working for the first time! It really is a superb product. Good build quality and it does everything you’d expect and more. It really is like turning your Canon EF lens into an E-Mount one. For example on the Tokina 11-16MM F2.8 for Canon when I turn the manual focus ring the NEX 7 responds by punching into manual focus assist mode. The detailing of the reverse engineering by Conurus seems very high and no stone left unturned with it. Of course you can turn off that MF assist live-view behaviour if you need to inside the NEX 7’s menus.

Matching focal lengths on 3 different sizes of sensor can be a headache if using all 3 of these cameras on one shoot – say 5D Mark III for a full frame look with portrait shots, NEX 7 for slow mo and GH2 for resolution and everything else.

Wide angle for me was 24mm on the 5D mark III = 16mm on the NEX 7 = approximately 12mm on the GH2. I say approximately because the sensor is 1.86x not 2x crop, to support multiple aspect ratios natively. Here is the Contax Zeiss 30mm on the 5D Mark III: 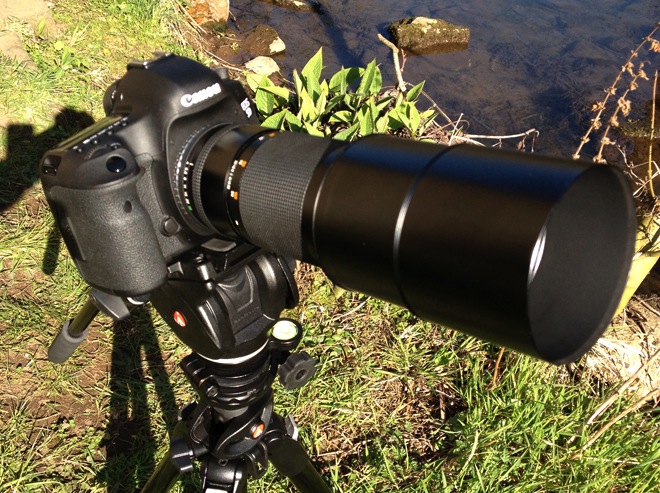 This lens is a great option for telephoto shooting since it isn’t too large and heavy (like a full frame F2.8 telephoto is), and gives superb results. Having a full frame sensor is a weakness for telephoto, you get closer with the 1.86x crop sensor of the GH2 and that camera don’t forget has the insane Ex-Tele 1080p mode which windows the sensor a further 2.6x. That is 1380mm F4 with the lens above. There’s an example of this in the video and more to come. The main challenge here is getting a stable image unaffected by even a slight breeze and rippling heat in the air. Although the lens has it’s own tripod mount built in, laying so much as a featherlike touch on the camera to change settings causes the image to jump about wildly and for a good few seconds afterwards. It is very challenging to shoot at 1380mm on such a small and light camera.