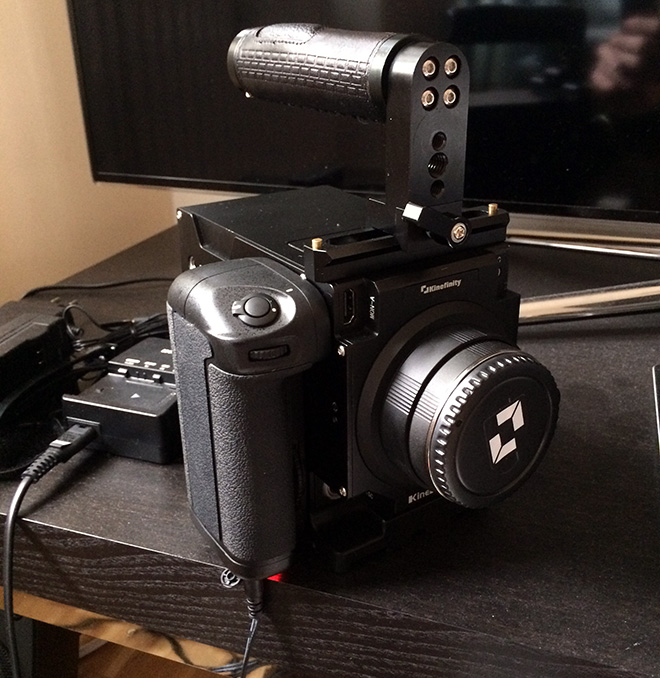 The €3199 KineRAW MINI is the latest affordable raw cinema camera to be released. Featuring a 4K Super 35mm sensor it is a rival to the Blackmagic Production Camera and an alternative to shooting raw on the 5D Mark III with Magic Lantern. It shoots 2K / 1080p Cinema DNG uncompressed raw internally.

Having now spent more time with the camera for the full review (coming soon), I was curious to see how 5D Mark III raw video stacks up against a dedicated cinema camera with a sensor purpose built for video – not stills.

With the help of a new EOSHD test scene, we’re about to find out –

This is the new test scene at EOSHD –

In time all the main DSLR video modes will be compared and the results published. 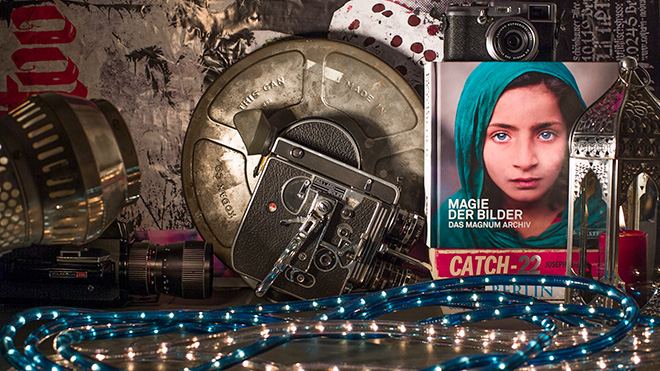 It doesn’t look much like a chart – but it is very purposefully set up.

The lighting is set so that it requires 13 stops of dynamic range to full render the darkest shadows (the Super 8 camera under the lamp) and brightest highlights (the motion picture film drum in full glare of the lamp and face on the book).

If the camera has less than 13 stops of dynamic range, how it affects the image will be clearly visible.

The Bolex camera in the centre has a lot of fine detail so you can judge resolution. The silver parts of the frame catch the light and are a test of aliasing. The fine matte textures on the Fuji X100 body are a test of false colour. Moire can show up on various fine details in the scene especially the lined barrel of the Super 8 camera’s lens.

The girl’s face on the book is a test of skin tone, gradation and colour. It’s also a firm test of colour and gradation in low light, being the only part of the image lit by the candle when the main lights are completely switched off.

A low light test can be done with the same scene using only the candle or light ropes, and boosting the camera to ISO 3200.

Trivia: the bulb in the main lamp is so hot it almost melted the viewfinder cup on the Bolex camera.

The KineRAW MINI has a 4K ready CMOS sensor. The 4K output can go to Kinefinity’s upcoming external recorder via a proprietary port on the camera. 4K wasn’t tested for this article – the hardware revision of the camera I tested was a slightly-before-release test unit but with identical sensor and specs.

The first question to ask the main specs borne out in reality?

I do indeed find the KineRAW Mini has around 1.5 stop more usable dynamic range than the 5D Mark III. When exposed identically with the test scene, highlights are handled better on the MINI. Highlights clip earlier on the 5D Mark III.

However since the 5D Mark III has a very clean sensor with little noise, you can lift the shadows a bit further before noise creeps in. Not 1.5 stops further though. 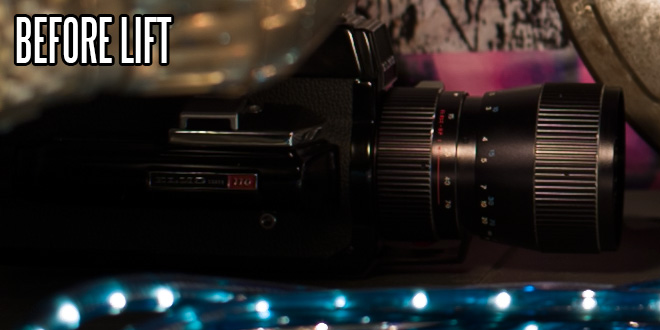 After lift, the 5D Mark III has less noise in the lows… 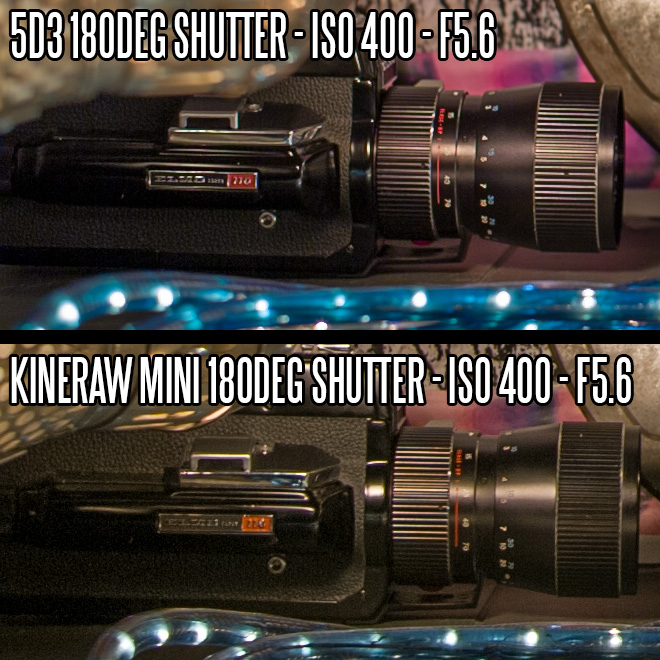 …Although you have to look closely. This was with an identical exposure, both at ISO 400 with the same lens.

However the highlights on this scene were burnt on the 5D Mark III.

To avoid this I then tried exposing for the highlights on the 5D Mark III – this involved a darker exposure, meaning the shadows get crushed.

That shows us what the 1.5 stop difference in dynamic range look like in reality after grading… 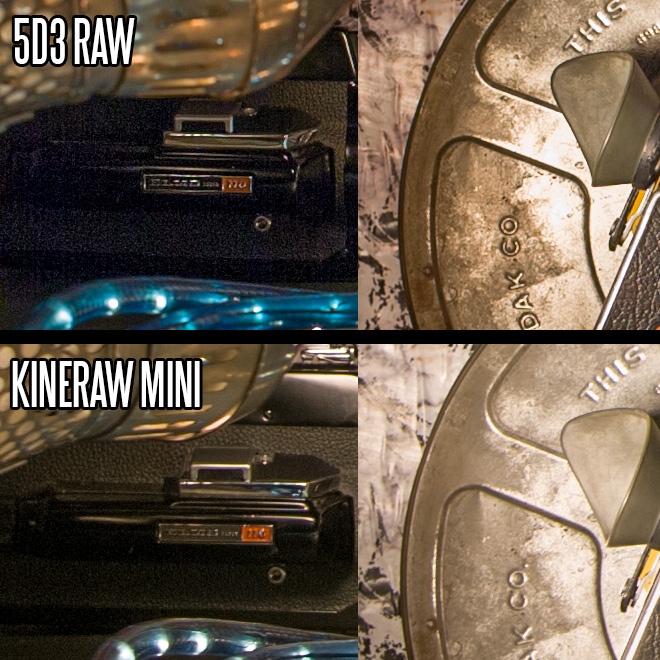 As you can see the 1.5 stop dynamic range advantage means the MINI renders the shadows and highlights in this shot effortlessly whereas the 5D Mark III now has too much noise in the shadows, yet still a steep clipping in parts of the highlight. That’s a result of trying to go too far beyond that the 11.5 stop CMOS sensor is capable of. You wouldn’t expose or grade a real scene like this unless forced to by poor lighting choices.

The winner in dynamic range is the KineRAW MINI just as the specs would suggest.

In terms of colour the camera could not be more different!

A very different treatment in post is required to try and match them.

More work is required on the 5D Mark III if you have olive skin tones in a shot. By default it renders these with a pink cast. The KineRAW MINI does well with olive skin tones, but less well with caucasian where you actually want pink.

The power of raw is that you can do the colour calibration yourself in post and work on individual colour channels but it does require some grading skill.

So let’s try and match the images and give the 5D Mark III back the more accurate olive skin of the girl on the book cover. 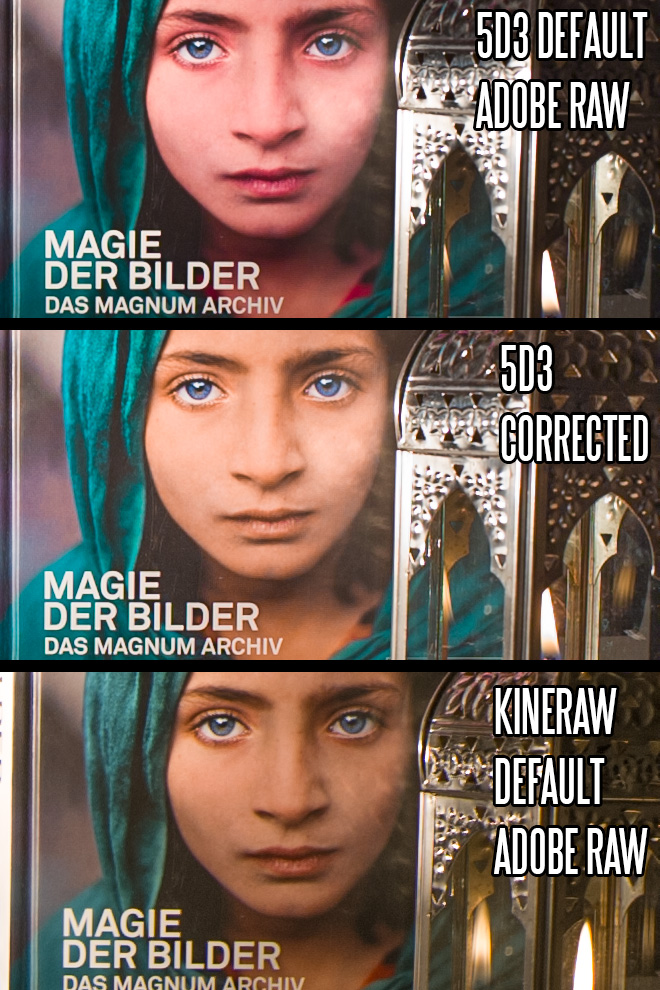 The upshot of this is that although the 5D Mark III isn’t always accurate when it comes to certain skin hues, in general reds and oranges are set up for a more pleasing look at warm colour temperatures. The KineRAW MINI needs more work with individual colour channels if you don’t want a golden cast to warm temperature colours.

Overall I prefer the Canon colour science here. Olive skin tones aside I find myself needing to do more work overall to correct the KineRAW, in more situations.

The default saturation level is also much higher on the 5D Mark III raw metadata.

The KineRAW MINI is desaturated by default when you handle the files in Resolve or with Adobe Camera Raw. You will need to boost saturation to a normal level on every clip, or use an appropriate LUT.

Excluding for now what the KineRAW is capable of externally (4K raw and CineForm) the resolution prize goes to the 5D Mark III in the 1080p stakes.

Fine detail is slightly cleaner looking on the 5D Mark III and vertical res can go higher at 1280 pixels in 3:2 sensor mode – great for anamorphic lenses. The 5D Mark III also goes to 2.5K in crop mode while the KineRAW MINI stays at 2K or 1080p in Super 16mm crop mode.

Neither cameras suffer very much moire or aliasing. On a real world shoot this wouldn’t be a factor to consider.

I’ve sharpened the 1:1 crops below to bring out any slight aliasing present. Both have some very minor aliasing around very high contrast areas (like on the stair-stepped white highlights on the Bolex frame).

Look also to the image on the right – the ridges on the Super 8 camera lens are rendered with more false colour on the KineRAW MINI than on the 5D Mark III.

But at the end of the day it’s a pretty similar performance. 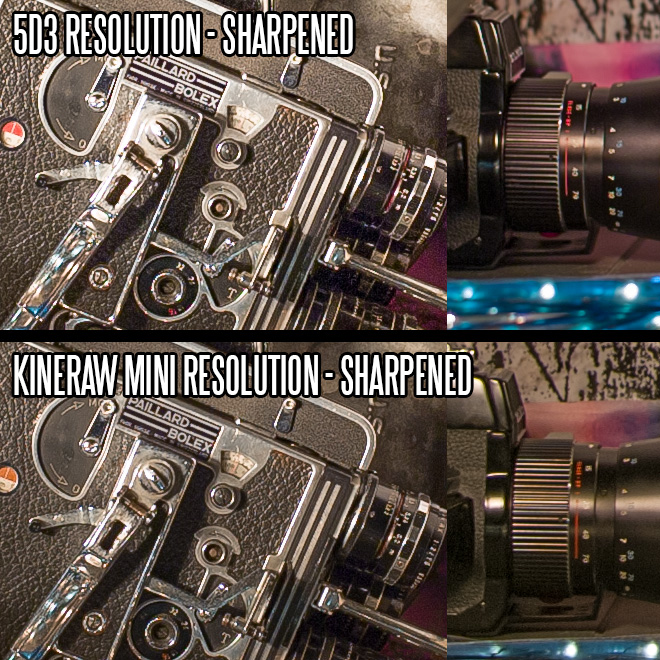 In terms of noise the 5D Mark III is cleaner at high ISOs than the KineRAW MINI, but the MINI still does a respectable job.

The biggest difference seems to be colour.

While the 5D Mark III holds onto colour saturation admirably at ISO 3200, the KineRAW MINI loses the richness of hue. 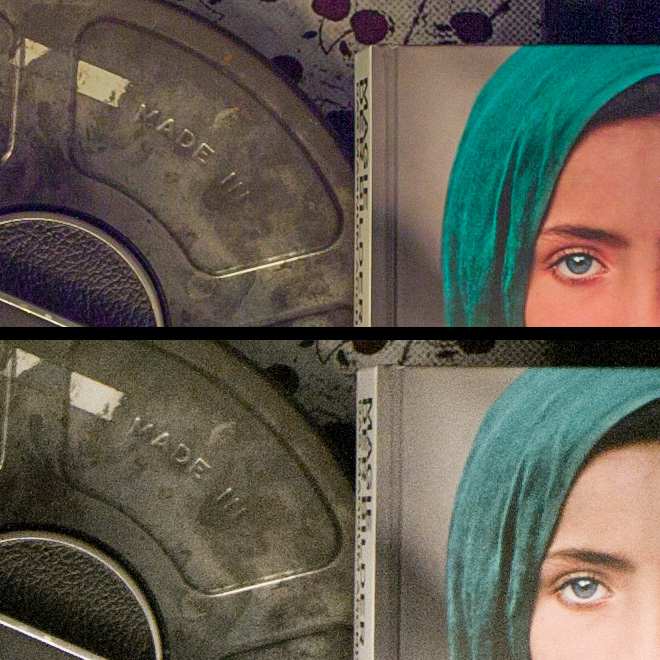 So seemingly a win for the better signal to noise ratio from the 5D Mark III’s full frame sensor.

At the very limits in post, the noise floor is very different. If you push the exposure beyond ISO 3200 and beyond the acceptable limit of the camera, the image from the KineRAW it is pitted with white speckles, around areas of pitch black. On the 5D Mark III you get a lot of blue and magenta fuzz over black areas (top) which indicates the blue or red channel clips later than the green channel in the raw data.

But I’d say the 5D Mark III is at least 1 stop cleaner than the KineRAW MINI at the same ISO. 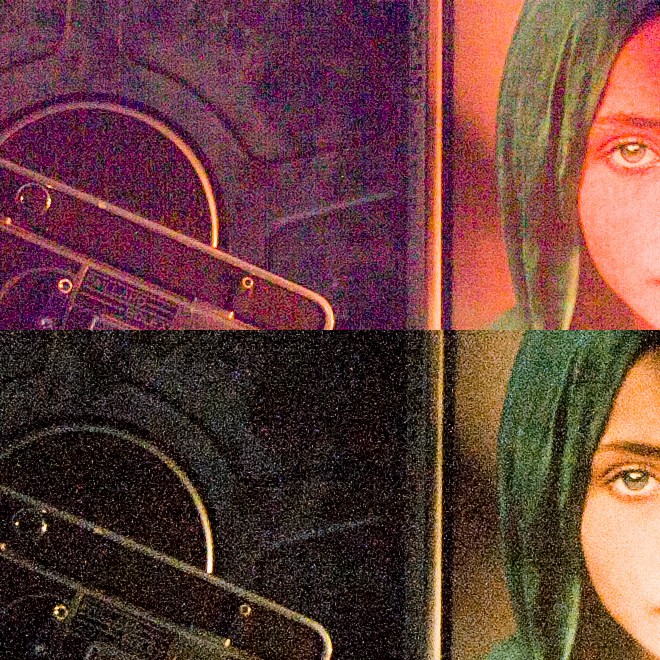 This is a case of full frame vs Super 35mm. In photography terms, Super 35mm is APS-C (not to be confused with full frame 35mm). The 5D Mark III has a clearly bigger sensor here. Which is better for you depends on the lenses you intend to use. Obviously if you’re invested in a large collection of full frame DSLR lenses then the full frame sensor is an advantage. If you have more APS-C and cine glass, then the KineRAW MINI has a more flexible lens mount which can be switched (to PL for example) and a sensor size suited to lenses like the excellent Sigma 18-35mm F1.8 zoom.

Kinefinity also have a locking EF mount (like the Red Scarlet) on the way. So mechanically the Super 35mm mount is better suited to film production on the MINI.

The difference in look between full frame and Super 35mm you know already. All else equal you get a shallower depth of field on the 5D Mark III and a heavier fall off in brightness towards the edge of the image with lenses when shooting wide open. This can be a very attractive look. It’s also easier to isolate the subject from the background when using a wide angle lens on the 5D Mark III (i.e. 28mm) than it is on the KineRAW MINI (18mm).

Overall I prefer the 5D Mark III because of the full frame look to lenses and Canon colour science.

That said, colour isn’t baked in with raw. It’s very much in the hands of the colourist – it’s just that the KineRAW MINI’s output often needs that bit more effort in post than with Canon raw.

This is especially true when shooting an interior scene which you want to give a warm glow, with a higher colour temperature. With the 5D Mark III it’s usually as simple as increasing the white balance on the kelvin scale. With the KineRAW MINI if you do only this, you will get a yellowish / greenish tint instead of warm reds and oranges. So be prepared to put in the hours learning colour grading in Resolve if you buy the MINI! It isn’t for the faint hearted.

Something I didn’t cover in this test but have noticed before is that the 5D Mark III has less rolling shutter. However the MINI now has a reduced rolling shutter mode which comes with a trade off in image quality. The firmware was released just after my tests were done so I didn’t get a chance to see how much the image drops off with this faster scan of the sensor.

The 5D Mark III is better in low light but the KineRAW MINI definitely has a dynamic range edge of around 1.5 stops.

So the finally tally goes like this which sees the 5D Mark III rack up slightly more plusses. However how you weight the plus points of each camera could have a heavy bearing on your purchasing decision. If PL lens compatibility and a 4K upgrade path is a priority then clearly the KineRAW can offer that.

Of course image quality is not the whole story. Stay tuned for my full review of the KineRAW MINI soon!