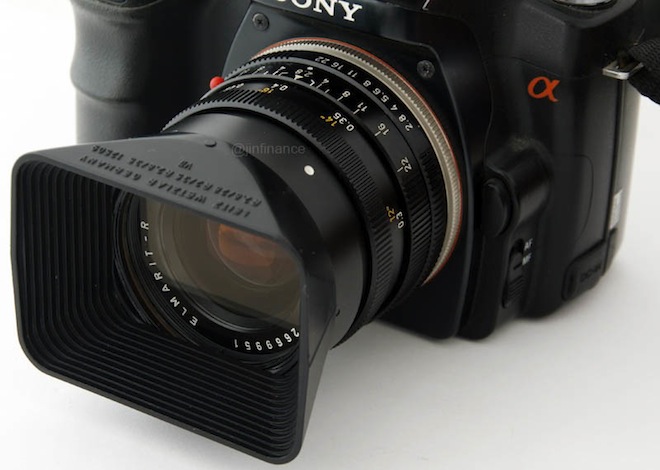 All lenses are designed to be placed at a certain distance from the sensor. Too far away and you won’t get infinity focus. In fact – if it’s off by just a few millimetres your lovely lens will become a macro optic only useful for taking snaps of insects and flowers.

So what DSLRs will your current lenses adapt to? The rule to follow is to see what your body’s flange size is. That isn’t innuendo it refers to something technical! Let me explain…

The flange size is the distance between the mount and the sensor. Essentially if your DSLR body’s flange is longer than that for which the lens is designed for the lens can’t be used. If it is shorter and you can fit an adapter in the gap then the lens will be at the right flange distance to focus so all’s good to go.

For example – Canon made sure to make the EF mount incompatible with the previous FD mount. EF is larger at 44mm whilst the old mount was 42mm. So lovely FD lenses cannot be used on Canon bodies without being rebuilt, or without degrading corrective optics in the adapter.

With the upcoming Sony A77 looking very promising for video, I am wondering which of my lenses will work and which won’t so have done some research. The A mount is based on the old Minolta SLR mount and is 44.5mm – even longer than the EF mount!

That’s not good news for Canon lens hoarders. That tiny extra 0.5mm of the Alpha flange and another 1-2mm used by the adapter ring would take up means the mount is roughly 1.5-2.5mm too far away from the sensor: enough to completely knock out focus.

This is where Leica-R glass has an advantage. It has a flange of 47mm. Just that bit longer to fit an adapter in between the A-mount of the body and the back of the lens whilst getting the lens exactly 47mm away from the sensor and not a millimetre more.

M42 lenses are 45.46mm but because they’re not a bayonet fixing they can screw into the adapter meaning the rear of the lens can just about get down to 44.5mm on a Sony Alpha, as they can on Canon’s EF mount at 44mm. The Sony adapter ring is 0.5mm thinner than the already thin Canon versions so manufacturing tolerances need to be spot on. Various M42-Sony adapters claim infinity focus and although a well made M42 to A-mount adapter should be capable some cheaper versions are slightly too thick and you’d have to stop down for a deeper depth of field to get a sharp image at infinity.

Nikon lenses have a 46.50mm flange – just 0.5mm shorter than Leica but that is enough to knock off infinity focus on a Sony DSLR, ditto for Contax Yashica (CY) Zeiss lenses, they are just 1mm over the Sony mount at 45.50mm. Adapters do exist on eBay but they have cheap and nasty corrective optics and won’t produce a sharp image unless you stop down significantly.

UPDATE: Dan Chung tells me there is a hardware mode that lets you use Nikon and Contax lenses on a Sony Alpha. Check this out here and here.

The Arri PL mount has a mount flange of 52mm but the back of the lens protrudes quite far into it, meaning it hits the mirror on Canon and Sony DSLRs. You have to have the camera modified expertly but it is possible to use this glass, even on full frame DSLRs like the 5D Mark II.

Check out Hot Rod Cameras for this

What about the NEX 7? 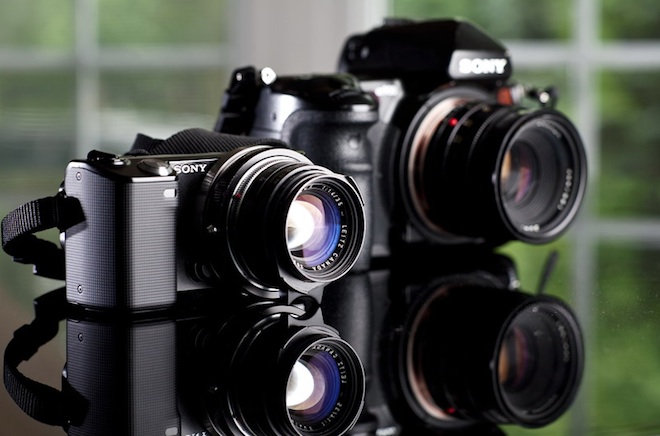 Above photo by Byron Jyu

The flange-back of Sony NEX 7’s E-Mount and E-mount lenses is 18mm and for Micro Four Thirds it’s 20mm. The world’s smallest flange (!) currently belongs to the Pentax Q which is 9.2mm, in part thanks to it’s small sensor.

If the flange is too short but the sensor large you tend to get soft corners and light fall-off like on the Sony NEX 16mm F2.8 pancake. An APS-C sized sensor and a 18mm flange is pushing the limits!

Essentially anything that covers an APS-C sensor will adapt to the Sony NEX 7. Most c-mount lenses and Micro Four Third lenses wider than 50mm will vignette, however (like the Voigtlander Nokton 25mm F0.95).

The largest flange distance for any lens is 61mm for the Russian OCT19 cinema lenses and anamorphic glass. OCT19 was Russia’s answer to PL. These will basically adapt to anything. (Not so with OCT18 though which currently only go to mirrorless E and MFT mount).

These types of non-Sony lenses works with an Alpha DSLR or SLT like the A77:

Samyang will release their 24mm F1.4 in Sony A-mount and it will be very interesting to compare it to the Zeiss 24mm F1.8 that launches alongside the A77. If South Korea start beating the Germans and Japanese at optics that is a serious wake up call!

The Samyang 14mm F2.8, 35mm F1.4 and 85mm F1.4 are also well worth buying – they’re full frame compatible too so when Sony update their full frame line of Alphas with video these lenses will truly come into their own. On APS-C 14mm is lovely and wide too and that will be my wide-angle prime of choice for the A77. If you want to go wider and have a zoom, the Tokina 11-16mm F2.8 is another great option but double the price.