With the new version of Blackmagic DaVinci Resolve (10.0) you can grade and edit 5D Mark III raw DNG sequences, with image quality at the Adobe Camera Raw level for the first time and performance through the roof.

This LUT gives you a more film-like image, a less harsh electronic look compared to the standard Rec.709 colour space and default settings. It gives you more detail in the highlights and a smoother more natural feel to colour.

Image quality has improved with a new debayering engine in Resolve 10, performance is amazing and Cinema DNG support has been broadened to support even standard DNG sequences made with Magic Lantern’s “raw2DNG” converter.

This is a VERY quick workflow. You have a very fast conversion from the master raw files to DNG using “raw2DNG” in one step.

No more slow ProRes transcoding, or round trips to After Effects.

Resolve 10 does realtime playback of 1080/24p DNG raw from the 5D Mark III. It now does so on both NVidia and AMD cards with GPU acceleration. Even on a modest $200 NVidia card with CUDA I have seen 40fps render times from DNG raw to ProRes. That compares to 2fps in After Effects CC!

Editing is greatly improved in Resolve, we now have full audio track support on the timeline for example. However if you’re a Premiere or FCPX user and just want to use Resolve to convert raw to ProRes and apply a LUT, performance is frankly incredible. Adobe After Effects CC still does not support the GPU for render tasks so Resolve is much better for transcoding DNG to ProRes at almost double realtime speed.

Until now I had been using Adobe After Effects because the image quality was better but that’s no longer the case.

Of course editing and playback of raw video is seamless and I’m only using an Nvidia GTX 560Ti with 1.25GB of video memory. I am upgrading this to a NVidia GTX 670 with 4GB of video-RAM (which cost a modest 250 euros on eBay) as the new temporal noise reduction feature in Resolve needs at least 2GB of dedicated video memory.

By default raw DNG sequences in Resolve 10 use a basic Rec 709 colour space and highlights are somewhat clipped. Combined with Canon’s already too punchy colour, this renders a harsh image with over saturated colour and high contrast, lending a more digital feel to the 5D Mark III’s raw output.

Resolve has a built in LUT for handling Blackmagic raw video but nothing for the 5D Mark III. So I have created my own. 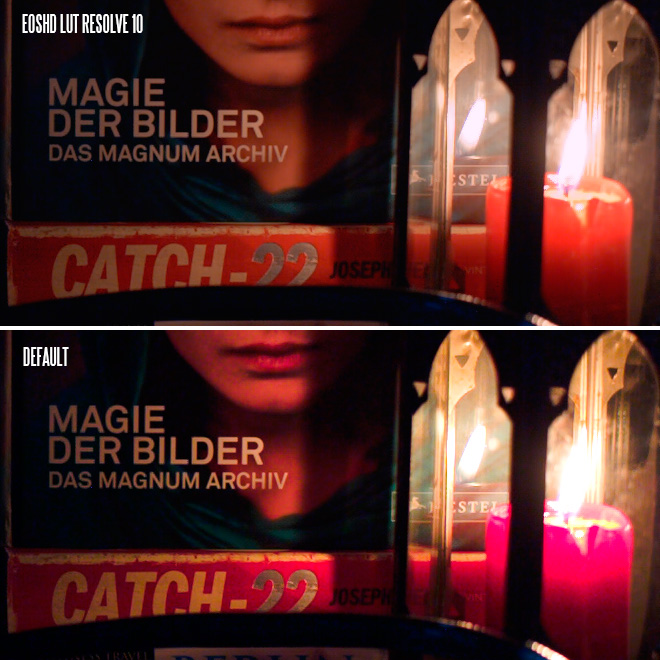 A softer, less harsh digital look to the image (more like the Alexa).

Plus a less green-cast on the default settings.

You can change the cast and white balance yourself – this is not baked in. 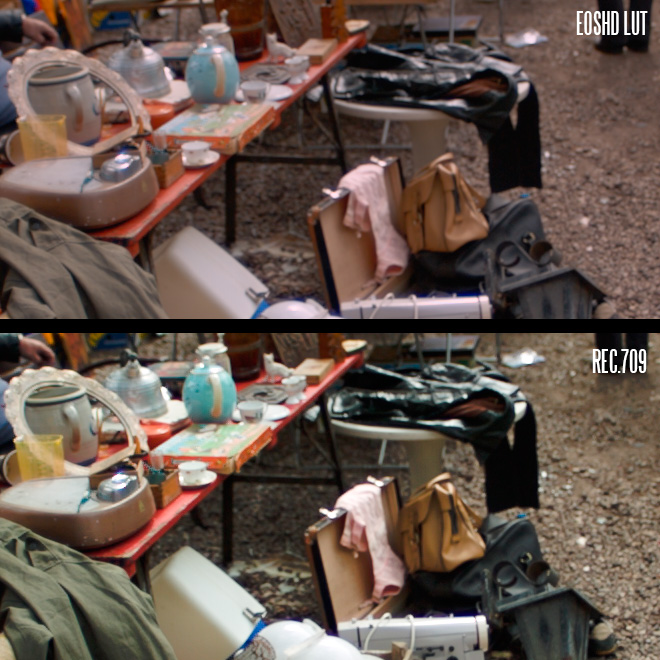 The LUT gives a nice lift to low light scenes without introducing too much extra noise.

It doesn’t give you hazy grey shadows… Inky black contrast is maintained.

The EOSHD LUT also gives you more realistic rustic green tones for foliage rather than the neon-green from the default Rec.709 colour space. 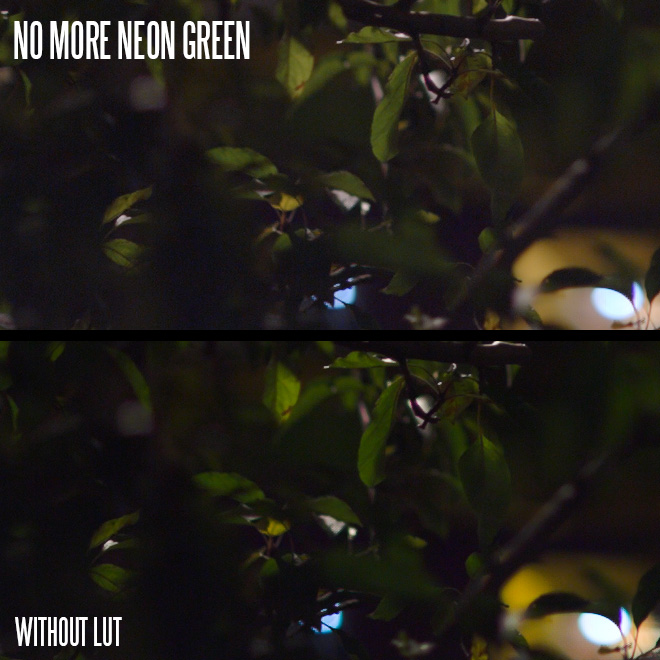 1. First download the EOSHD Film LUT here for the 5D Mark III. (You’re welcome also to try this with the 7D and 50D – I have not yet tested it with these cameras but it should work fine).

2. If you haven’t yet done so, upgrade to DaVinci Resolve 10. Those with a license dongle (like the one which comes with the Blackmagic Cinema Camera) can download the full version. If you don’t have this, select the Lite version. Both versions are downloadable from the Blackmagic Support website here for Mac and here for Windows.

3. Open Resolve 10 and your project

5. Go to Camera Raw and select Cinema DNG instead of Arri Alexa in the top right, then change Colour Space to BMD Film along with Gamma to same (see below). Be sure Highlight Recovery is ticked. If you want to reduce aliasing set sharpness to 0 instead of 10, but bear in mind the image will look very slightly softer. NOTE: you will need to set white balance per individual clip on the timeline later while colour grading. 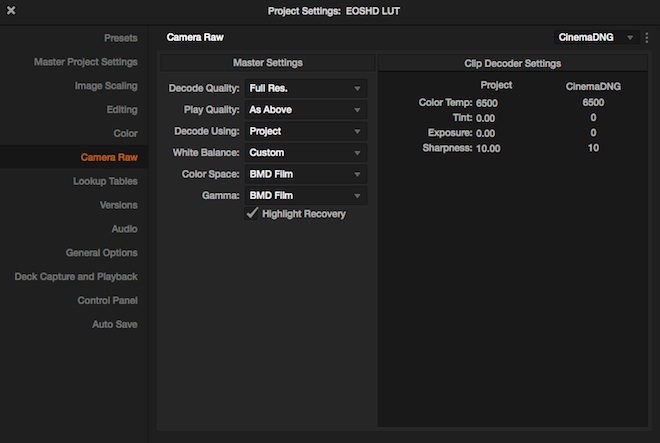 6. Go to Lookup Tables and click Open LUT folder. Copy the EOSHD LUT “.cube” file to that folder in the Finder (Mac) or Explorer (PC) window that has opened. 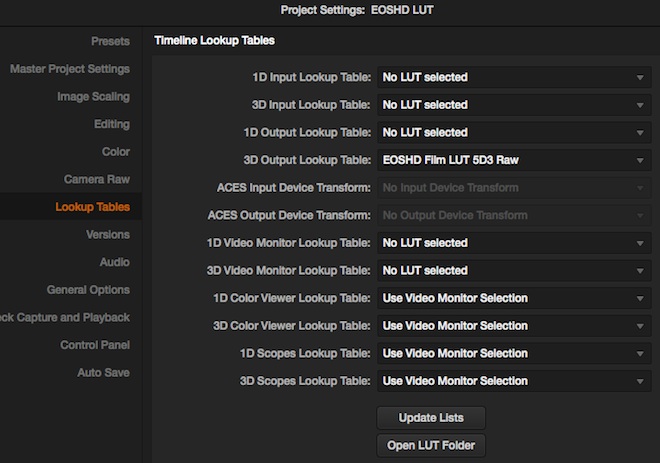 The LUT is now applied to your footage.

8. Please share your sample shots, experience and feedback on the EOSHD Forum here

Instead right click the node or clip in the Color tab of your Resolve project.That presents you with an option to choose a 3D LUT. Select the EOSHD LUT or a LUT of your choice.

Note that a LUT is ‘destructive’ so if you’re doing further heavy colour grading on top of it, with multiple nodes, only apply the EOSHD LUT to the final node.