Learn all about anamorphic shooting – the EOSHD book is now on eBay for just $19.99

The new GH2 hack is in its very early stages but has a helluva cool feature for anamorphic shooting. I thought I’d try it out.

One of Vitaliy’s initial patches puts MJPEG video into a 4:3 aspect ratio, the same as 35mm film.

So for the first time we can shoot as intended with a 2x anamorphic lens on a DSLR. 2x anamorphic lenses were designed to be used with 35mm & 16mm film to produce wide 2.35:1 cinema framing whilst avoiding the need to crop the frame. It’s 2.35:1 because some of the film frame is used for the sound track. On a DSLR in 4:3 the anamorphic lens produces 2.66:1, only a little bit wider than standard cinemascope.

With an anamorphic lens you can use all the available vertical resolution and depth of field, whilst ending up with a more cinematic aspect ratio than 16:9, which is more ‘cable TV’ than cinema.

But now we have 4:3 video on a DSLR, the 2x anamorphic are just as preferable, in some cases more so.

The LOMO has the best flare and a lovely authentic anamorphic image. It is designed to work with it’s own Russian prime cinema lens in OCT18 mount (this is how I am using it) and is designed by the Russian optical genius responsible for Hawk’s anamorphic range (those lenses are worth $25k+). It’s still my favourite, although mechanically the Iscorama is miles better at racking focus.

As I explained in my anamorphic shooter’s book with 16:9 like on Canon DSLRs there is a workaround for avoiding such a wide 3.55:1 image with a 2x stretch – you can expand the image horizontally to nearly 4K instead of squeezing it vertically and then crop the edges if you want a less extreme wide frame.

The horizontal stretch rather than vertical squeeze means you also get to keep 1080 lines of resolution and it can achieve upscaled anamorphic 4K from normal DSLR footage.

Now with this GH2 4:3 patch all I needed to do was put the footage in Premiere CS5, do a custom 2.66:1 HD 1920×817 sequence with a square pixel aspect ratio, and squeeze the footage to 76% vertical. Yes you can do things like anamorphic pixel aspect ratios, anamorphic sequence presets in FCP, but this is a simpler and more flexible way of working. The crux of the technique is to resize your 1440×1080 MJPEG footage from the camera so that it is 1920×817, which gives you a true 2.66:1 frame and takes the way the distortion of the optical anamorphic squeeze.

At this early stage the 4:3 MJPEG from the GH2 is by no means perfect image quality wise but improvements will come as the testers get their heads around how it can be manipulated. Already we can increase the bitrate of the MJPEG and last time with the GH1 we had 80Mbit from it!! That was on much older hardware and the GH2 has a far more powerful and modern 3 core image processor so I am expecting big things from it bitrate wise this time. For now I have just left bitrate ‘as is’, which is very low (9Mbit or so). But as you can see from the video above – the theory works and 4:3 MJPEG gives us proper 2.66:1 from a 2x anamorphic on a DSLR for the first time.

A third of my DSLR rig is now Russian super-powered. What names could we have for the hacked GH2? GH2000, GHski?

The settings to change in PTools are MJPEG 480p, scale it to 1280×960 and increase the bitrate quality as seen here 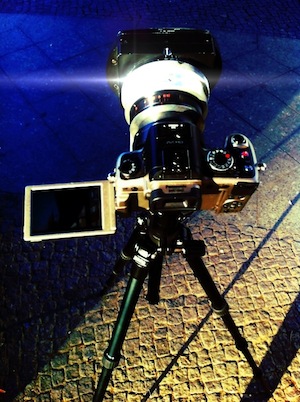