The technology behind the shoot is rather interesting. Two Sony F3 cameras mounted on the front of the train, remotely controlled and recording to e-sata drives in the control carriage, kitted out with Joe Dunton / Panavision anamorphic lenses from London.

Joe Dunton is a British Bafta winning camera equipment guy who has always held a great fascination with anamorphic lenses, and was one of Stanley Kubrick’s closest collaborators after A Clockwork Orange in the 70’s and provided Kubrick with his lenses on Eyes Wide Shut. 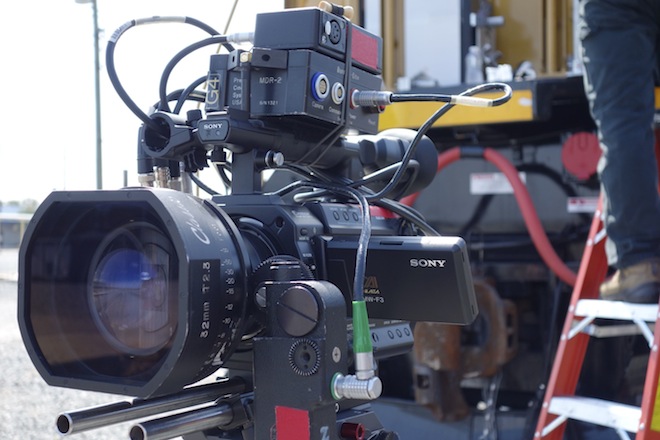 Here Andrew Wonder tells us how he did it…

“This was a simple idea we could have probably done with a GoPro but I wanted to give it a scale and feeling that was beyond what consumer technology has made capable for everyday shooters. I choose to go anamorphic for this reason and thought Panavision would be the perfect partner. Joe Dunton did some amazing work out of England and North Carolina. He even had a set of S16 anamorphics. The ones we used were based off old Cooke lenses. I used 2x 32mm anamorphics [shipped out of London]to give myself the FOV of an 18mm on a super 35mm camera (wide but not too showy). These were the lenses used on movies like George Washington so I know they would add more personality and texture to the shoot. Once again your guide was key to this project working. Figuring out the aspect ratios and field of view would have been impossible without it. It was also a great tool to get the agency on board with the anamorphic idea.” 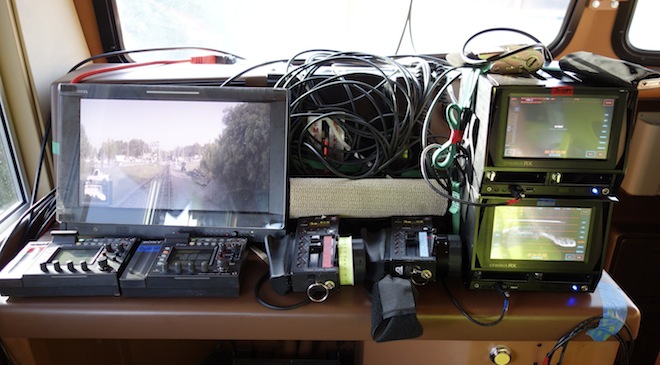 Remote controlling the cameras on the front of the train

“We shot all 2 days of the journey at 1080p/60p using the F3 going into a cinedeck. The cinedeck let us not only record from 200 ft away but also let us go directly to e-sata drives so we didn’t need a computer to download and could record ProRes the whole time. The Cinedeck was the real crux piece of gear in making this come together and actually working. Dual link SDI didn’t have the signal strength so we have to use fiber converters from Panavision to get the signal to go the 200 feet from the front of the locomotive to our tech station. We had preston controllers to change the iris and paintboxes to control shutter / gain throughout the day / night.”

Above: behind the scenes of Andrew’s shoot

“The original intention was to speed up all the footage and show the journey but at 100K times if was just too quick. Instead we had to use jump cuts which I think help enhance it because you get a better sense of pace and movement. We cut the project in FCP because that’s what my editor was more comfortable in and I really regret it. Premiere would have made life so much easier. All the speed up effects were done in after effects by Omega Darling in NYC. Twixtor was part of the equation to help get things right. We also subtlety added a slight blur to the timelapse portions of the video. Speeding up video never has the right timelapse motion and I think the blur helps a lot. From the train we were able to download ALL of it’s data (it takes GPS and other readings every 5 seconds). We took the timecode from the original footage and lined it up with that data to create the layer on top.”

“The original intention was to use one centered camera but because of safety we could not and had to put two cameras a few feet apart on the front. I used my 3D training to sync the images to help the post team.” 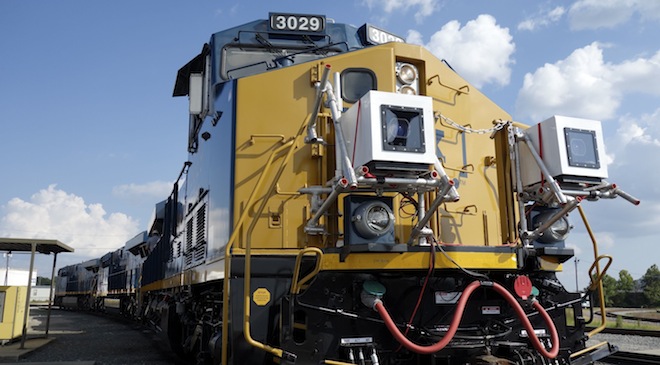 “The shots at the beginning and end were done with a drone rig by Perspective Aerials. The opening was shot with a FS100 with 18mm Sigma E-mount lens (pretty good lens) and the final was with a 5D3 with 20mm Nikon. For each shot we only had one take, no way to practice and only a few minutes to setup. I’m really proud how well they were able to nail it. Though it can’t do was a full helicopter would it is an amazing replacement for a jib or crane which some added punch.”