Buy the Zacuto EVF Flip through this link and support EOSHD.com!

The Zacuto EVF is the first new generation DSLR accessory that is truly killer. It benefits DSLR ergonomics so much and monitoring is a different world with it. Peaking, zebras, anamorphic, you name it. Also with the latest firmware it has audio monitoring via the HDMI loop through and on-screen levels. That is good news for the future (at the moment DSLRs don’t output audio whilst recording) and it means any absence of a headphone jack on future DSLRs won’t even matter.

The EVF can be used in a minimal way or as part of a handheld / shoulder mounted rig. At minimum it can be mounted on the hotshoe and even without any other rigging a DSLR looks extremely professional with it. Yes you lose some stealth factor but the camera looks far more serious with that cable and paparazzi flashgun style EVF on top. Several times people have approached and started a conversation about it and it gets some serious love. And I’m not even a highly approachable affable cockney like Philip Bloom is!! Most of them already recognise it as The Zacuto EVF – even in Berlin!

Having that eyecup on top of the camera which can be angled is so much better than having a small screen level with the back of the camera or a tiny uncomfortable EVF flat to the camera like on the GH2. It feels like a medium format Hasselblad when used as an EVF on the hotshoe. 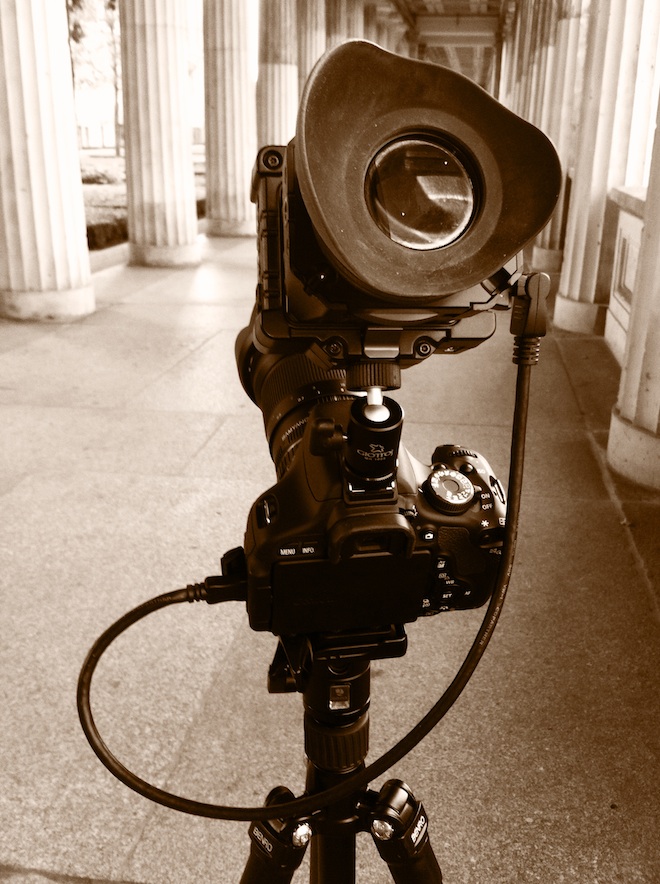 Above: a glossy HD feed right in your eye.

Quality wise it is simply superb. From the panel to the build, everything is top notch. The screen is iPhone 4 standard and Apple Cinema display style IPS not the cheaper TFT technology of most computer monitors. It’s also LED backlit for a more even spread of brightness, better blacks and longer battery life.

The build is chunky but actually not too heavy and it’s not big. The Z-Finder on the EVF Flip attaches to a metal frame and attaches with a satisfying clunk, and a metal latch allows you to flip it up and use it as a monitor. This is really great for run & gun monitoring on location with a tripod or slider because it means you can keep the Z-Finder attached when not in use and not have to take it off and put it somewhere safe, risk losing it or lose valuable time shooting.

The EVF Flip comes with an articulated HDMI cable so you can angle it where you like. The only caveat with the design is that when you’re using it on the hotshoe rather than offset to the left on a shoulder rig, the HDMI socket is on the right of the unit when it is on the left of the DSLR. That isn’t ideal in my view but it’s a minor quibble, as is the fact the EVF buttons are on the left and I’m right handed.

The EVF works beautifully with the GH2 and 7D. With the 60D, 600D, 550D and 5DMkII you do get a short blank out for a second or so when you hit record but its been minimised compared to other monitors I’ve used. That is the fault of the camera not the accessory, so on future Canon DSLR’s it shouldn’t be an issue.

On the GH2 you could not record in ExTele 1:1 crop mode with HDMI active but the recent hack by Vitaliy Kiselev is attempting to make that work (currently not reliable). On the Canon 600D ‘Digital Zoom’ recording mode and in-camera focus assist work fine via HDMI but the in-camera focus assist on the GH2 doesn’t magnify via HDMI.

I instead use the Zacuto 1:1 pixel mapping function for magnification at the press of a button on the EVF instead of the in-camera one and many will prefer to use peaking as their manual focus assist and the EVF takes care of that too, highlighting the edges of objects in focus.

The Zacuto EVF 1:1 is not as large a magnification as the in-camera focus assist and it doesn’t need to be because of the resolution of the screen and the magnification of the Z-Finder Pro. 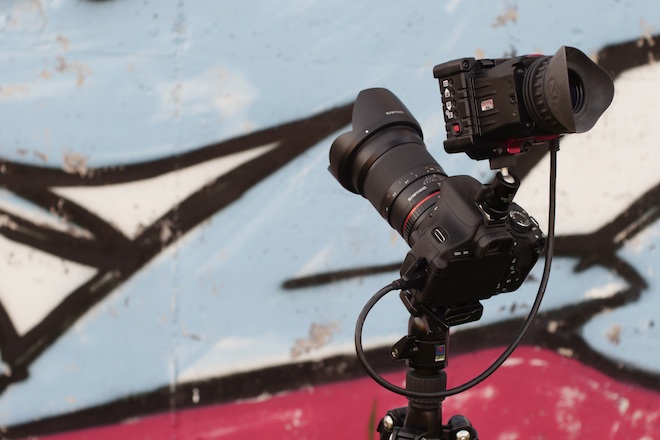 The custom scaling presets also take care of the Canons pretty well, although on the 600D it does need a bit of fine tuning. On my Sony HX9 compact that does 1080/60p, the EVF didn’t scale properly but the HX9 HDMI output shuts down whilst recording anyway (like the GH1). You can use the Z-Finder on the HX9 though so it’s not a lost cause.

My SmallHD DP6 is higher resolution at 1280×720 and is a fantastic screen, but as it turns out 800×480 was a good choice by Zacuto for the EVF. WVGA resolution is fine for the 5D Mark II, 60D, 550D and 600D since their HDMI outputs drop to 480p during recording. Since 800×480 is almost at retina levels of pixel density anyway on the EVF similar to the iPhone, you don’t notice a drop in quality at all when used with the aforementioned Canon DSLRs. 480 lines for 480 is a perfect fit. On the larger DP6 I do notice it, because the 480p has to be upscaled to 720p and is shown over a larger panel.

If you already have a Zacuto Z-Finder you can get an idea of the EVF’s quality by putting your iPhone 4 under the loupe. It’s very hard to show in review form how it looks but as a comparison to the GH2’s screen it really is light and day difference. You can see from this macro shot just how fine the pixel pitch is on the EVF’s screen compared to the GH2’s. 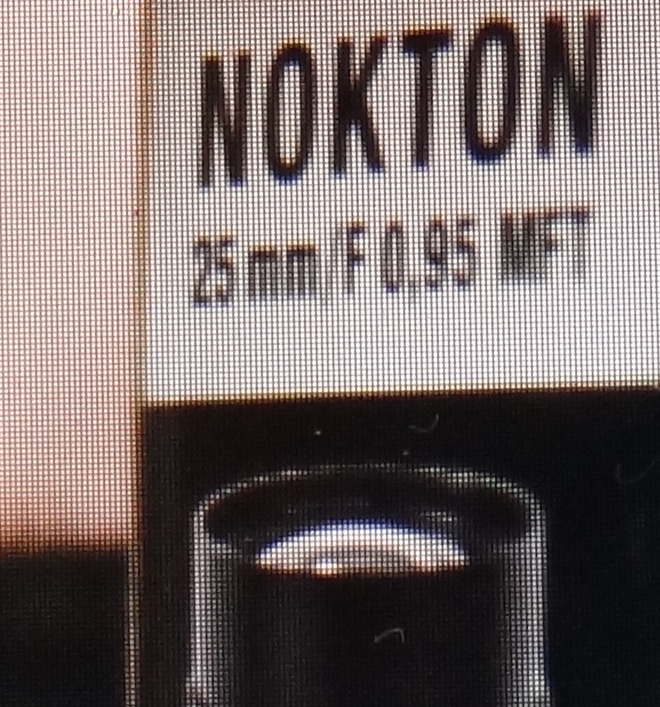 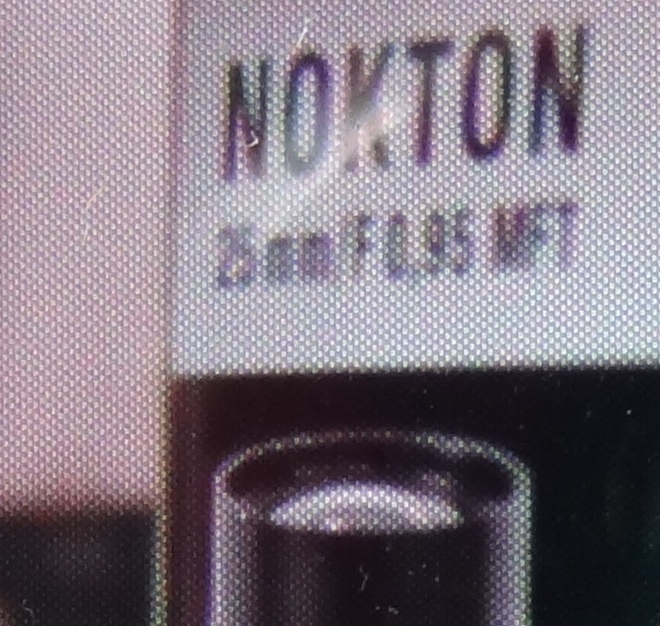 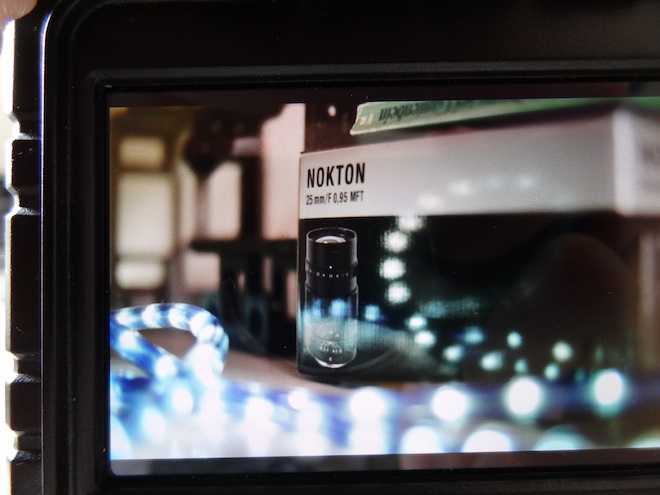 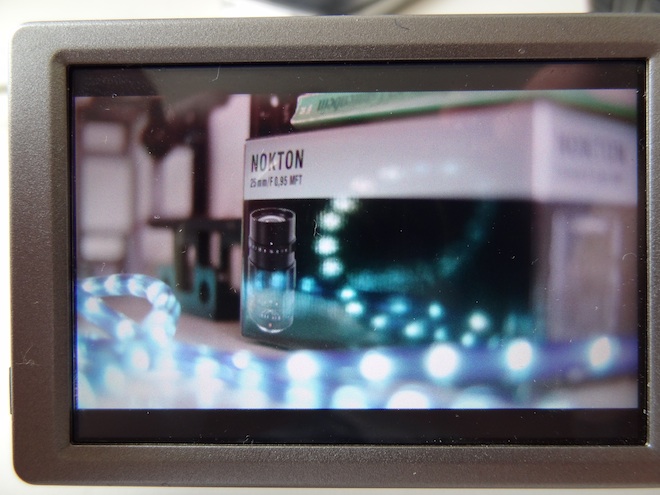 Colour is a lot better too. The GH2’s LCD is really washed out and low contrast by comparison.

Here’s an iPhone snap of the screen during a shoot at magic hour opposite the Berlin DOM.

It gives you some idea of the smoothness of gradated tones on the screen. Overall colour is really smooth and accurate. 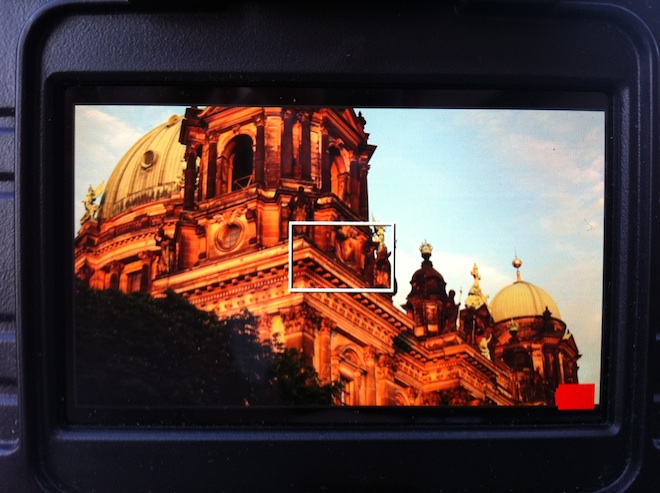 The firmware adds audio monitoring and output amongst other things! On cameras that already support this like the Sony FS100 of course you’d need the relevant audio monitoring device that can plug into the HDMI loop output on the EVF and feed your headset but it is a great feature, as are the level bars on the screen.

With the Magic Lantern hack and Vitaliy Kiselev hack you can also turn off AGC on certain DSLRs and the 60D, 600D and GH2 offer a certain degree of manual audio control out of the box, but sadly they shut off HDMI audio when recording starts.

It would be good to see a standard headphone jack on a future Zacuto EVF. That would be really useful when DSLRs get their HDMI outputs fully sorted. 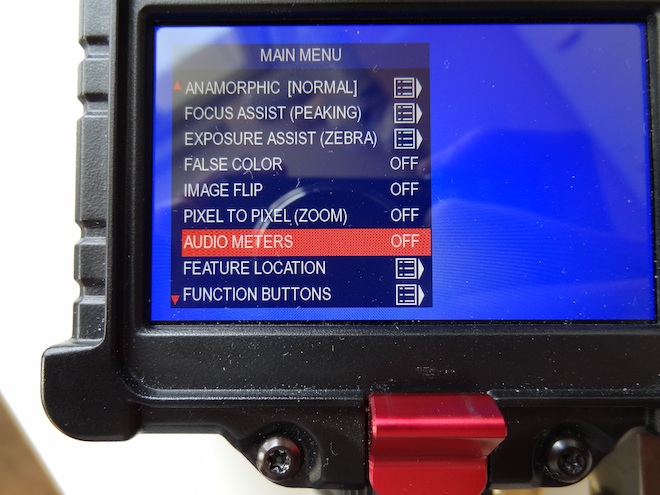 Above: Audio monitoring with the latest firmware update 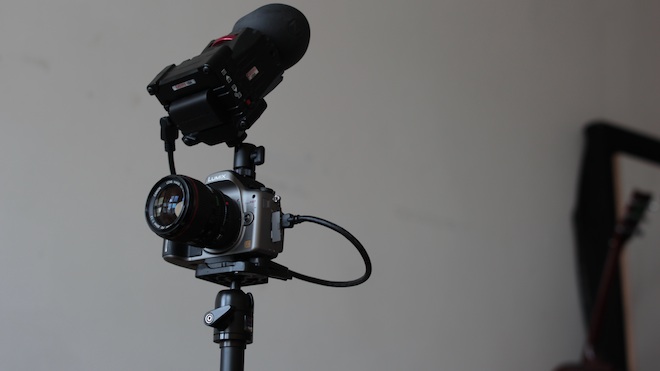 Above: The Zacuto EVF atop the mighty hacked GH2.

Battery life is stella and it uses a standard DSLR battery. Very commendable. You wouldn’t catch Panasonic or Sony doing something like that! Zacuto have allowed us the use of commonly available batteries and you won’t be needing to spend money on bespoke second batteries from Zacuto. I had days and days of use out of one charge and that was on a 3rd party battery not even a genuine Canon one!

The usability of the menus is excellent. You get the bare minimum of controls – a menu button, up and down, select. This works very well and the menus are logically thought out. You can also assign functionality to the up / down keys which double as F1 and F2, so for example peaking to help your focussing would only be 1 button press away, as would be 1:1 magnification. 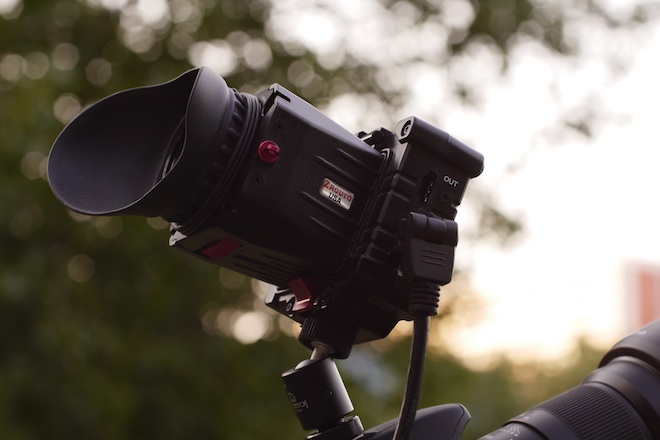 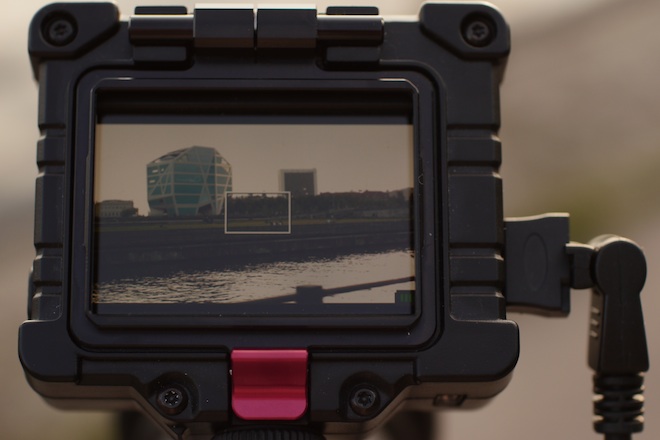 The Zacuto EVF is the start of a line of accessories that will be part of the landscape for a long time. This kit will eventually go hand in hand with DSLR video. In the future it’s logical to assume these EVFs and compact monitors will become even more indispensable as they get NanoFlash like capabilities and record an uncompressed 10bit HDMI signal from the camera at 200+Mbit to ProRes. At the current time you won’t miss such a feature however since none of the DSLRs do an HDMI signal that is higher quality than their internal recording, but for monitoring purposes it is pristine and lovely.

Another positive is that if you already have a Zacuto Z-Finder you simply buy the EVF Flip or Snap and save some money over the Pro version. If you buy the EVF Pro kit it includes a Z-Finder Pro, and this of course can be used separately on cameras that don’t support an HDMI output whilst recording like the HX9 compact.

There are 3 flavours of Zacuto EVF:

Even for stills photography with manual lenses the Zacuto EVF is a recommended purchase, because of the peaking and ability to angle the screen whilst the camera is on the tripod. The eyecup is really comfortable compared to the optical viewfinder on a DSLR so if yo do a lot of manual focus stills and not just video, it will make you life much easier.