Note: video is shot with no rig on an outstretched hand.

The SLR Magic 35mm T0.95 is an ultrafast manual focus lens targeted at cinematographers. It is a Leica M mount lens with bespoke adapters for mFT and Sony E-mount.

Until now I had been using this lens on my Sony FS100 but Olympus recently updated their OM-D firmware to support 5 axis stabilisation in video mode with all manual focus lenses.

Using the same sensor as the Panasonic GH3, the OM-D E-M5 is a camera that offers a good enough video image, but no 24p or high bitrates. It does however have a unique place in my bag because of the stabilisation system. It’s nothing short of revolutionary and it is the closest you can get to the feel of a MoVI rig with, well, no rig at all.

That’s the beauty of it. It is minimal, lightweight and discrete.

The OM-D like all mFT cameras needs good glass to achieve the Super 35mm cinema aesthetic. I’m not a great fan of the way the format looks with slow glass or with some of the hyper-sharp clinical modern zooms.

This is where an aperture like F0.95 comes in. It is really like two lenses in one. Wide open you get a soft glowing look which is forgiving of skin and faces, a very shallow depth of field which defies the smaller sensor size and a cinematic image that make the OM-D or GH3 less like a sterile digital format. Stopped down and it allows for more manageable focus and higher sharpness for when the shot calls for it. You get to pick. The lens has eleven aperture blades so when you stop down, the bokeh maintains the circular look of wide open bokeh, far more pleasing than the dopey hexagonal bokeh of most modern lenses. 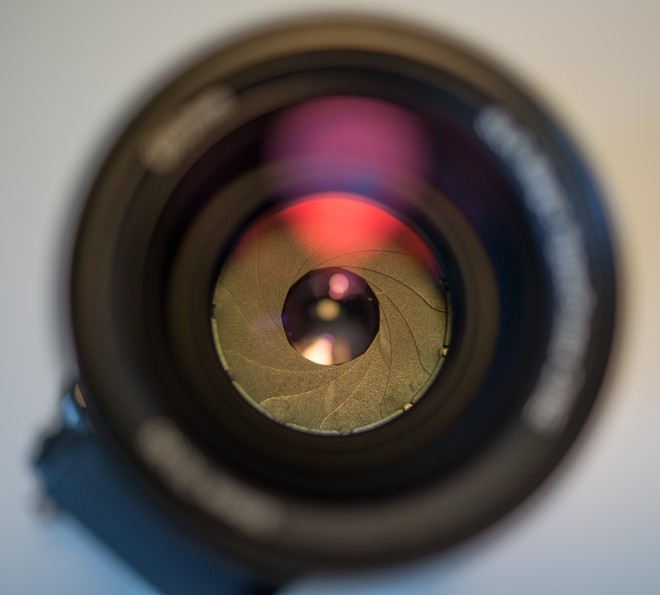 The use of the Leica-M mount is a smart move by SLR Magic as it allows the lens to be used on both Sony and Panasonic cinema cameras like the FS100 and AF100 or GH3. This does exclude Canon but the lens is optimised for a short flange back distance so isn’t compatible with EF mount anyway.

The lens has a very large rear element by mFT standards so it needs to be used with SLR Magic’s own mFT to Leica M mount adapter which allows the rear element to move further back into the adapter and achieve infinity focus. 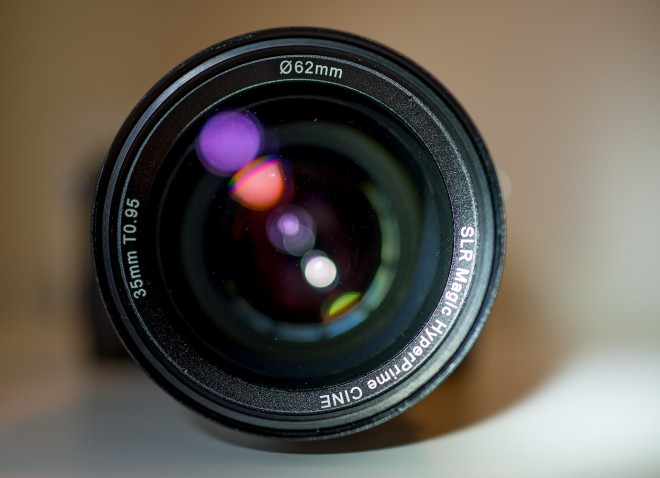 A few notes about the new PEN E-P5

Let’s digress for a moment.

It is worth pointing out that 5 axis stabilisation is now in two cameras, the E-M5 and new PEN E-P5.

I checked this out yesterday and it is basically the same camera in a slightly smaller body, very nice to handle, with a higher resolution (but not OLED) screen, no EVF and no weather sealing. Olympus forgot to add any much needed video mode features such as 24p, a higher bitrate codec, reduced moire or any increase in image quality in fact I felt the E-P5 gave me results that were softer than what I’m used to on the E-M5. The camera does however have an absolutely wonderful feature for run & gun shooters. It is a crop mode which can be toggled at the press of a button WHILE recording. Incredibly this crop mode doesn’t just work in the middle of the sensor, but it can be moved around the frame before being activated so you can choose an area of interest to punch in on and record it. It is so quick to grab a shot like this, as it is practically like changing prime lens instantly whilst framing. Unfortunately although I did do some praying before reviewing my E-P5 footage for the first time, crop mode suffers the same fate as the normal video feed – a painterly feel to fine detail and moire. Olympus do a great job on the stills side, now they should focus on improving their video modes.

As a lens primarily aimed at filmmakers in the market for a compact cinema lens and costing $1249 you’d expect the SLR Magic 35mm T0.95 to be a serious performer and it is. Wide open it has a similar level of sharpness to the Zeiss 50mm F1.4 on the Metabones Speed Booster, which works out at 35mm F1.0 but a little less contrast which makes for quite a cinematic feel. 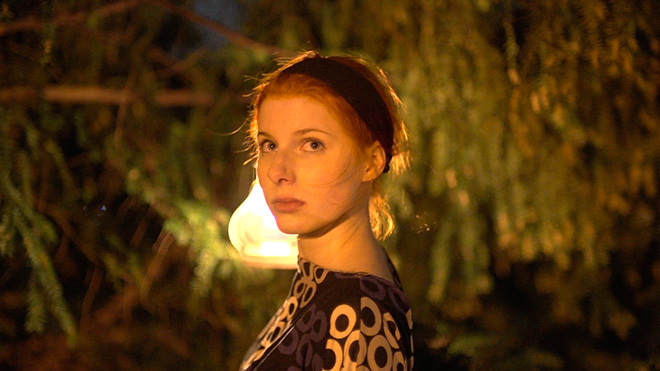 Above: Julia is illuminated with a single candle in pitch black darkness, shot with SLR Magic 35mm T0.95 on the Sony FS100 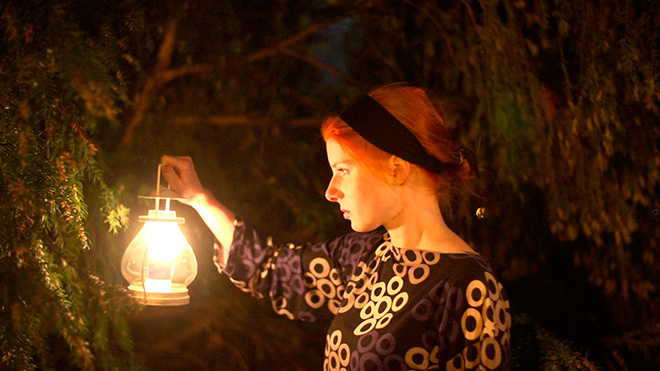 In the corners it is of course MUCH sharper. The Speed Booster and a fast prime however is a great budget option which comes pretty close to the overall look and feel of the 35mm T0.95. I plan to do a full comparison soon.

In terms of flare the SLR Magic 35mm T0.95 has, shall we say, character. Sometimes I love the flare from the lens, other times it can be an issue but the built in lens hood can help avoid some unwanted flare.

Where the lens is particularly strong is in mechanical design and feel. A film industry standard gear pitch on the focus and aperture rings, both buttery smooth in operation and no clicks. The entire lens is made from metal, there’s no plastic at all.

The 35mm T0.95 covers Super 35mm, APS-C and Micro Four Thirds but does not cover full frame E-mount (such as on the rather poorly performing Sony VG-900). It’s particularly special on the FS100 for shoots which demand extreme low light, and I find the look on Super 35mm more cinematic and more characterful than the Samyang 35mm F1.4. 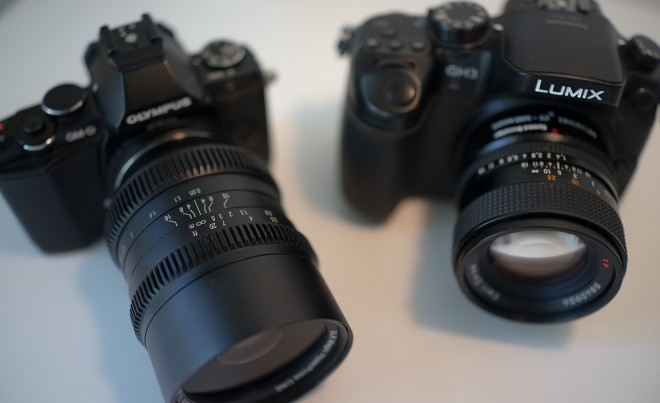 Both an aperture of T0.95 and a 5 axis stabilisation system make it an exciting time to be a filmmaker, however they are overlooked a bit. If Zeiss released a T0.95 speed Compact Prime with 5 axis optical stabilisation, Laforet would be all over it for months.

That SLR Magic and Olympus are just quietly getting on with providing great technology like this is not lost on me. Consider the stabilisation system is in a $1000 consumer camera and the lens itself (arguably the more long-lifed investment) isn’t any more expensive than a high end DSLR.

If you are on a stricter budget consider a good quality Nikon or Zeiss 50mm F1.4 on Speed Booster for mFT or E-mount (the Canon version of which isn’t quite ready yet). Just bear in mind that performance is poor in the corners at anything but very slow apertures and the photographic lenses are not a patch on the build robustness or mechanical handling of the SLR Magic 35mm T0.95 with a follow focus.