Note: the Sony A65 shares the same sensor, image processor and viewfinder as the NEX 7 and Sony A77. Image quality is 99% the same on all 3 models.

As part of my series of reviews on the Sony A65 I shot this comparison yesterday near Manchester, city of Oasis and Frank Sidebottom. The A65 represents the latest generation of Sony’s technology – 24MP APS-C CMOS sensor, ExmorHD image processor with 1080/60p and a 2.4MP OLED TruFinder. So is it any good?

Sony’s new sensor in the NEX 7, A77 and A65 is considered down Tokyo way as their best yet until the new full frame ones come along in 2012. I loved the ‘middle range’ one in the NEX 5N because it hadn’t taken an overdose at the Hacienda of megapixels. But I certainly feel colour and gradation are more life-like and smoother on the A65 compared to the NEX 5N and Canon 600D. In some areas the A65 outperforms the hacked GH2, mainly in the shadows and highlights.

The GH2 tends to crush to black more easily and macro-blocks shadow detail even with the high bitrate hack , and the A65 holds onto more detail in the lows, which you can recover more of in post. The 600D can macro-block the mids sometimes whilst the A65 doesn’t do that as much. At the end of the comparison test video you can see the affect some of the A65’s creative styles and picture profiles have on the image and they are pretty big. Retro Photo is like a crazy tripped out version of Nostalgic on the GH2.

In terms of scaling from the full sensor to 1080p – this is the main area of differentiation when it comes to DSLRs, SLTs and mirrorless cameras with video. Some do it well, some do it terribly. The A65, NEX 7, A77 and NEX 5N are all distinctly middle of the road when it comes to scaling, so resolution is not at the GH2’s mark for clarity and stability.

Here’s where I rank the current cameras for resolution, and how close that resolution resembles a photo rather than a poor facsimile of a photo.

1. GH2 (Venus Engine FHD [Info])
With or without the hack the Venus Engine FHD does a superb job, no noticeable moire in real life shooting, minimal aliasing although it is there if you look for it. Fine details come out smoothly and intact with plenty of resolution. The image processor has 3 cores, more than most laptops and this power is put to good use especially with the hack.

2. Nikon J1 (Expeed 3 [Info])
Surprisingly the Nikon J1 and V1 have a very detailed video output on par with the GH2. This is good for future full frame DSLRs like the D4 or D5 since they will be getting the new Expeed 3 chip too. Hardly any moire. Aliasing is not too bad. Rolling shutter is the best of any ‘DSLR’ that does video due to a combination of a small sensor and very fast data readout speed. So it is all the more such a shame about the low bitrate, lack of 24p and small sensor – all lost due to Nikon’s consumer electronics focus for the 1 system which was taken to excess. At least it isn’t crippled in low light by a high megapixel count.

3. Sony A65, Sony NEX 7, Sony NEX 5N (Bionz)
The new Sonys resolve more detail in video mode than current Canon DSLRs but moire is present in some cases like on distant rippling water surfaces – not to the extent of the 600D – they have a sharper image but it has slightly more in the way of aliasing unfortunately. Sony could have done a better job. All the current offerings – NEX 7, A77 – share the same image processor as the A65 and NEX 5N so have a very similar output. The higher resolution sensor in the A65 compared to the NEX 5N doesn’t seem to make much difference to video resolution at all. The NEX 5N has an edge in low light but when it comes to video it isn’t massive, although the maximum ISO on the A65 is 1600 for video and on the NEX 5N it is 3200.

4. Canon 600D, 7D, 5D Mark II, etc. (DIGIC 4)
We have waited far too long for a replacement image processor that does video well. As a result, Canon DSLRs have the softest image and the most moire out of any current 1080p DSLR. It isn’t a good showing but as we have seen the popularity for video of these cameras has been stratospheric thanks to good availability, famous filmmaker endorsements, massive existing user-base, huge lens selection and a lot of very well shot footage by pros.

Here is a pixel peep of my video showing exactly how the GH2, A65 and 600D stack up for detail and clarity. 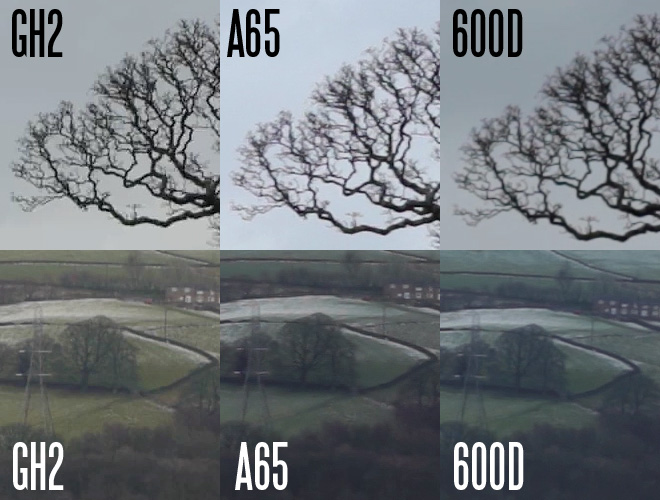 What hurts the A65’s detail sometimes is compression. It has the lowest bitrate out of the hacked GH2 and 600D. With shallow depth of field shots and close-ups you don’t notice it very much since the codec is quite advanced, but it begins to show on wide angle shots of finely detailed architecture and landscape.

Don’t go shooting any brick walls with the A65. In most practical realities the Sony A65 can keep the GH2 in sight when it comes to resolution but there are situations where it craps out and the GH2 doesn’t. Moire can be a real issue on the A65.

Check out the moire on the lake. 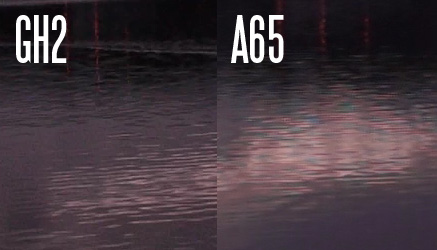 The internal SteadyShot system is electronic in video mode and mechanical for stills. In both modes it is very effective and one of Sony’s traditional strong points. Buy a cheap 300mm lens and it suddenly turns into a stabilised one, which would cost far more on the GH2 or Canon 600D.

The handling of the body for the most part feels better than the NEX 5N (a few niggles aside) and the menus are quick to get what you want out of them. However beware the LCD hinge which is at the bottom of the camera when using a large quick release plate for video heads. These can jut out under the hinge and prevent the screen from opening fully and rotating. Sony’s decision to put the hinge at the bottom is a bit of a silly one.

The HDMI port on the A65 is recessed and extremely close to the edge of the recessed AV port area on the A65’s left hand side, which means most baby HDMI cables won’t connect because the rubber on the connector hits the ridge next to the HDMI socket. I had to physically cut my Zacuto EVF HDMI cable down to the metal connector before it would fit in the A65. It seems Sony are playing their famous trick where the only cable that fits a Sony… Is a Sony.

Once connected the Zacuto EVF Flip performed great with the A65 although you have to setup a custom scaling preset to get the image to fit perfectly. HDMI on the A65 seems to do everything the internal EVF does, even the on-camera focus magnification mode works for stills via the HDMI output. The A65 can also output 1080/60p.

Unfortunately there are on-screen icons which can’t be turned off. You can go as minimal as the shutter speed, aperture and ISO in the 16:9 black bars but don’t think of cropping video out of that from your Atomos Ninja recording – one square focus point stays on screen bang in the middle of the video feed whether or not you have AF on or off. With manual focus lenses it acts as an AF confirm box. I actually find it quite useful and there is no point doing external recording with current generation DSLRs because their HDMI output is no better in quality than internal AVCHD. I feel external recorders are for the future not the present.

The hotshoe on the A65 is a Sony-Special… Which means you cannot attach anything good to it without an adapter!!

Some people are afraid of heat issues with the A65, like the A55 before it. But these are pretty much unfounded this time around. According to the manual it can record maximum clip lengths (29 minutes) in all circumstances except for in 40c heat where it drops to roughly 13 minutes and needs to cool off. Obviously I didn’t encounter any heat issues on my shoot!!

For low light shooting, at the maximum ISO 1600 it is okay – not quite as good as the GH2, 5D Mark II, NEX 5N or 600D but not too far off either. However there are of course no black & white tricks like F0.95 ISO 12,800 with a film like grain here like GH2 owners enjoy. For a fine noise pattern you need a GH2 or Canon C300. The noise structure isn’t as attractive on the Sony A65 because of the lower bitrate codec and iffy sensor scaling.

The A65 seems to have better colour than the NEX 5N. The sensor seems to be superior in that regard, if not for low light. I think the sensor is rather good for dynamic range as well, though I am still testing it. Shoot objects with a lot of backlighting and the camera behaves very well indeed.

Automatic white balance is a bit too cool for my liking, it doesn’t try to simulate the colour temperature human vision sees like the Canon DSLRs do (although frankly they go too far!)

The crop in video mode is not actually bothering me as much as I thought it would. The camera allows 100% accurate framing because the video mode on the dial activates the crop not the record button. If that wasn’t the case it’d be a complete deal breaker.

The exposure and colour balance of live view remains exactly the same when you hit record like on a Canon – anyone with a GH2 or NEX 5N can attest to the rather disturbing gamma shift between live view mode and record mode, so this is definitely a plus point for the A65.

If you can’t get your hands on the rather expensive Sony NEX 7 and A77 this Christmas, I really do recommend checking out the Sony A65. You’re getting the same image quality and 95% of the same features for 50% of the A77’s price, especially when it comes to video.