I’ve been using some demo samples for this special review and I’m absolutely stunned.

Metabones and Caldwell Optics have given us a Zeiss / Kubrick / NASA special! These adapters are completely new and purpose designed to fit only the Blackmagic cameras. Offering super bright apertures as fast as F0.74 and finally some great wide angle possibilities, I put both new adapters through their paces… 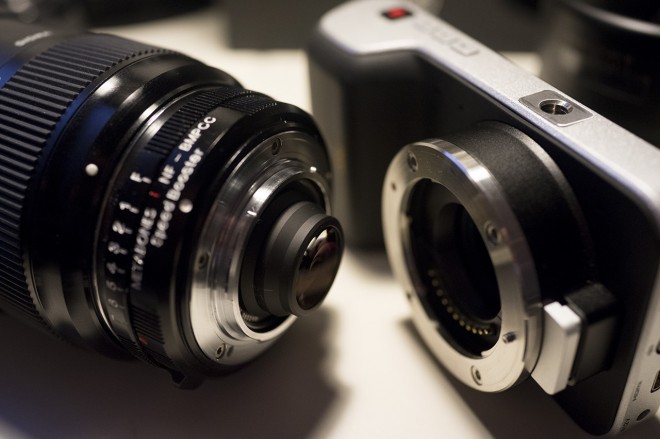 Kubrick’s famous Barry Lyndon glass was a 50mm F0.70 and 35mm F0.70. These gave quite a soft glowing image and you can see for yourself because the lenses are now available to rent.

The two new Speed Boosters have a truly remarkable affect on lensing with the Blackmagic cameras.

The results can be extremely sharp even at the super fast apertures now enabled.

Blackmagic’s cameras were previously rather small crop sensor affairs with a 2.39x crop on the BMCC and 2.88x crop on the BMPCC (over full frame, the photographic standard).

There’s a lot of nice MFT and Super 16mm glass around but since most people use a lot of photographic lenses on these cameras, it would be nice to get back to APS-C for Nikon DX or closer to it. 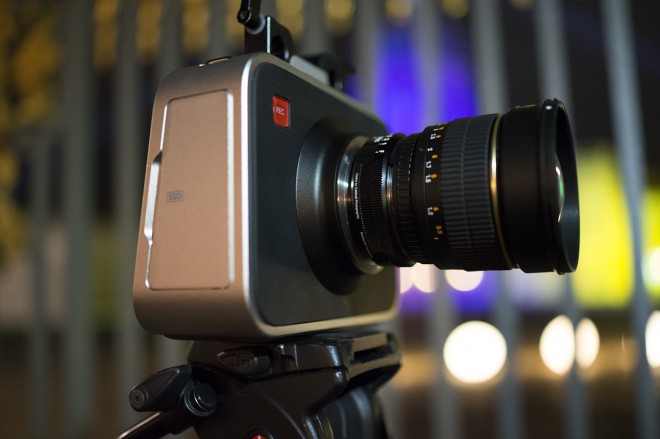 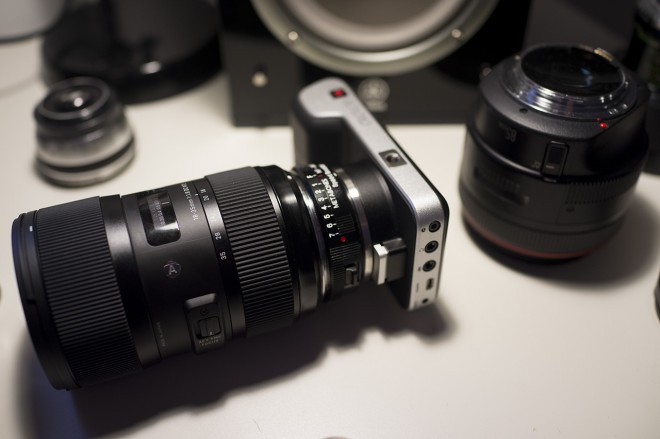 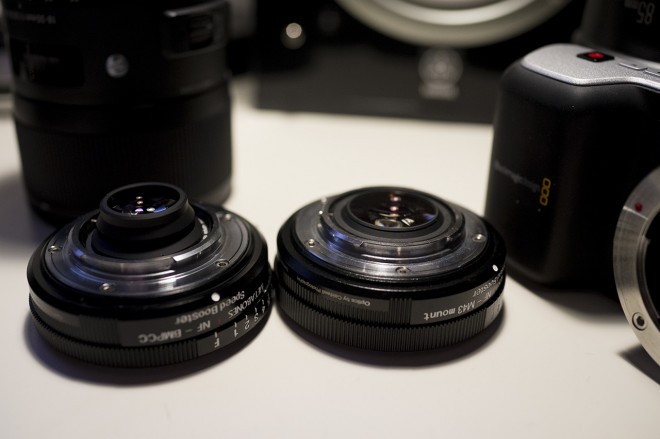 The older Speed Booster for general usage on all Micro Four Thirds cameras has a 0.71x reduction factor.

On the standard adapter a 35mm F2.0 becomes a 25mm F1.4. That same lens on the new Blackmagic Pocket Cinema Camera benefits from a more aggressive 0.58x reduction factor. The new adapters have a rear element which goes right up against the sensor with barely a few millimetres clearance!

Here I am shooting with the Samyang 85mm F1.4 on the BMCC version of Speed Booster. This lens goes well with it – very sharp wide open. 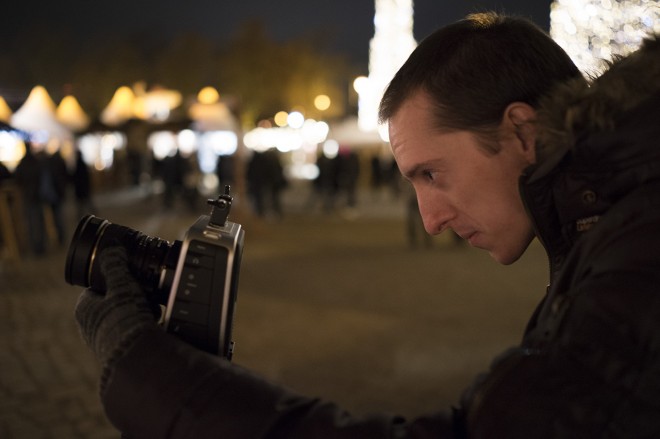 The Nikon 50mm F1.2 is transformed into a 29mm F0.74 on the Blackmagic Pocket Cinema Camera.

What this adapter also does is at a stroke solve the wide angle lens conundrum for Blackmagic users.

The effective crop factor for the BMCC is now 1.53x which is a perfect match for Super 35mm and APS-C.

Lenses like the Tokina 11-16mm F2.8 are truly wide (not to mention fast) on the BMCC – just like they are designed to be, on APS-C DSLRs.

On the Pocket Cinema Camera the Tokina is also very wide with the new Speed Booster – a 6.4mm F1.6 at the wide end in fact.

The new effective crop factor if you choose not to use the focal length calculation instead is 1.74x for the Pocket – that’s larger than the GH3’s sensor at 2x crop and the GH2’s wider aspect ratio sensor at 1.86x crop.

The Blackmagic Cinema Camera (MFT mount) version of the new Speed Booster has a 0.64x reduction factor – not quite as much as the Pocket version but it still gives you a maximum aperture of F0.80 and makes wide APS-C lenses truly wide again. 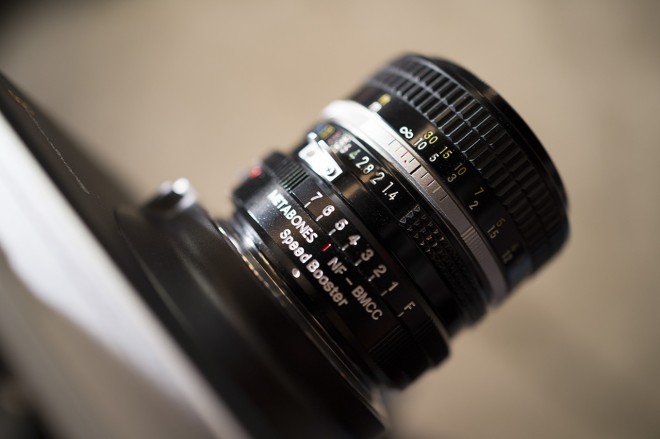 It’s with the new Sigma 18-35mm F1.8 that I feel this adapter is a massive breakthrough. The two perform superbly together. On the Blackmagic Cinema Camera the Sigma actually breaks a record – the world’s fastest Super 35mm zoom. A stunning 11.5-22.5mm F1.1 with the new BMCC Speed Booster. It goes to F1.05 on the Pocket Cinema Camera and the wide end benefits from actually being wide! Nearly 28mm in full frame terms.

Wide open, the resolving power of this combo is rather good. The video above was shot on both the BMCC (MFT mount – thanks for the loan in Berlin, Lucas) and my Pocket Cinema Camera.

The Nikon 50mm F1.2 would do better especially stopped down to F2.0.

Now just to be clear – these new Speed Boosters are designed ONLY to fit the Blackmagic cameras. They will not fit a standard Micro Four Thirds camera (due to the space taken up by the shutter mechanism for stills).

They are a major reason to own a Blackmagic camera and the Speed Boosters will be constantly wedded to mine from now on. 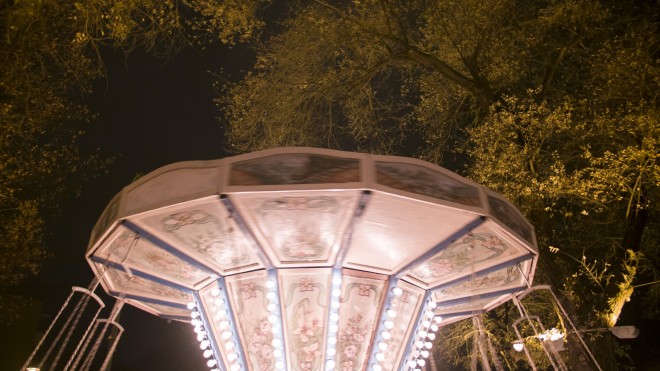 Above: Click to download the full 2.5K frame from the Blackmagic Cinema Camera, shot with Sigma 18-35mm F1.8 on the new BMCC Speed Booster

Nikon’s fastest primes are the F1.2 50mm, 55mm and 58mm, which all improve with the new Speed Boosters in terms of MTF chart performance and brightness. With these lenses you get low light performance on par with the F0.7 NASA / Zeiss lenses for Kubrick but with arguably higher resolving power. 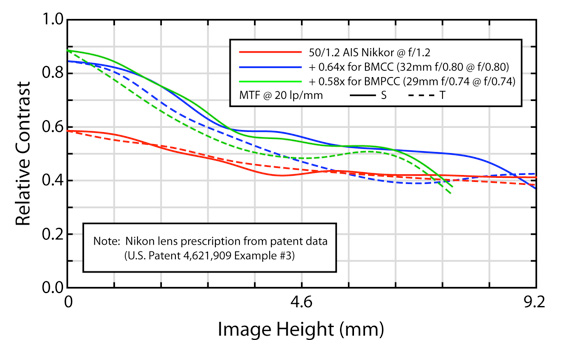 Nikon did not do many F1.2 aperture AI/S lenses and only one is currently in production. However with a more common F1.4 aperture you still get F0.81 on the Pocket Cinema Camera Speed Booster. That gives you stella low light and a much more shallow depth of field than with MFT glass on the Super 16mm sensor with no Speed Booster.

Of the Nikon F1.2 glass, the 55mm is the oldest and was replaced with a 50mm F1.2 in 1978, which is still sold by Nikon today. It performs about the same as the old 55mm but is slightly smaller.

The best performing (by a mile) is the 58mm F1.2 but this is extremely expensive and rare. That’s the lens which will likely outperform the Kubrick / Zeiss 50mm F0.70 when paired with the new Speed Booster. It covers a similar field of view to the Kubrick lens on Super 35mm when paired with Speed Booster on the Blackmagic cameras too. I have a feeling this sentence just bumped a few eBay auction prices up. 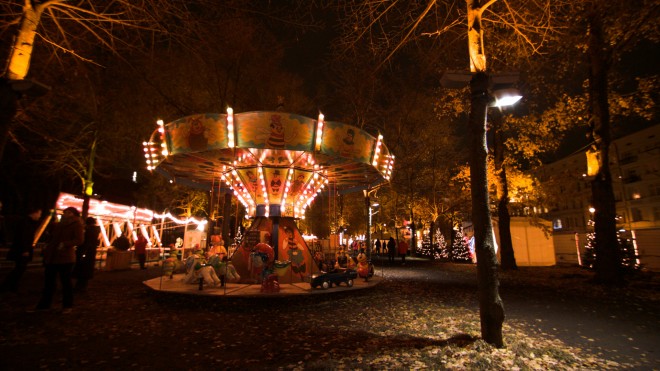 During my shoots I discovered that most Nikon mount lenses performed superbly with the new Speed Boosters on both BMCC and BMPCC. The Tokina 11-16mm at the wide end does appear to have very soft corners though. (Click the above image for 1080p version).

Other lenses like the Sigma 18-35mm F1.8 performed superbly – and not just in the centre of the frame. 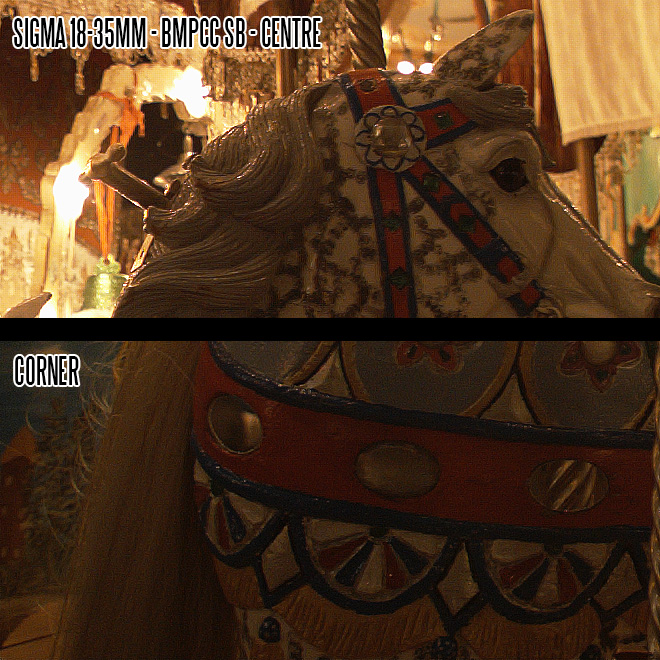 It’s not as sharp as the Sigma and not as contrasty but it’s still a very respectable performance considering the speed. 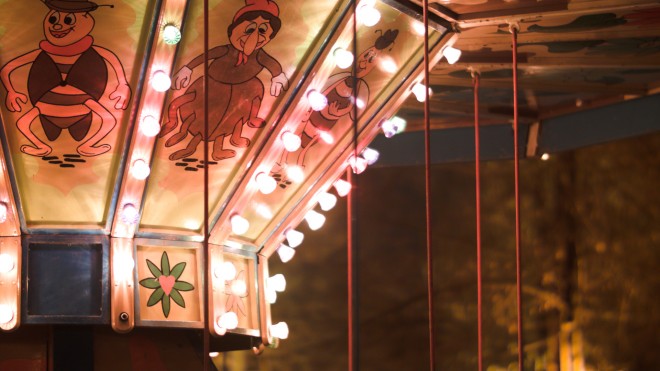 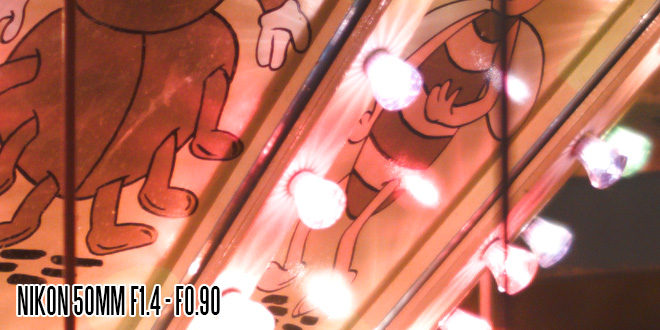 There’s some coma but then the Nikon has that wide open, Speed Booster or not.

The only real issues I ran into were when shooting into areas with a lot of bright highlights and dark areas meshing together. 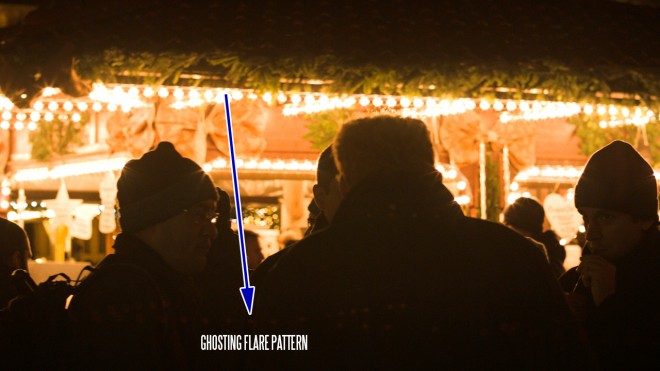 It’s subtle but it’s something to watch out for.

I have more shoots coming up with the new Speed Boosters, mainly with the Pocket Cinema Camera version.

I feel this is the beginning of the journey and there’s a lot of glass I haven’t tried yet. Just to be clear here’s what I have tried: 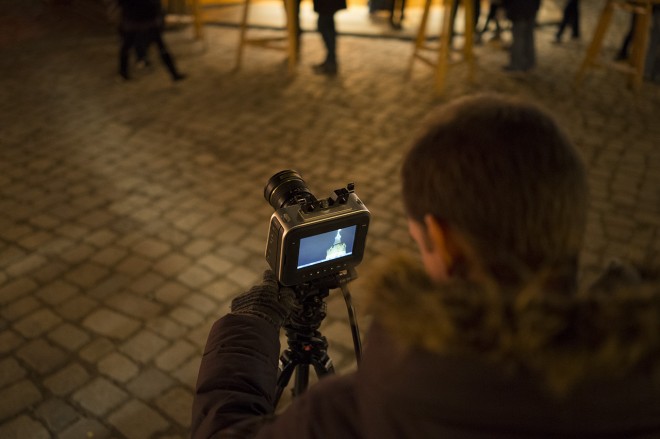 Well the world has turned on it’s head once more. Suddenly a smaller sensor is an advantage. Remarkably a small sensor is now a hit in low light. Thank goodness we have these innovators on the scene, in an industry dominated by large companies who innovate only for a select few at a huge cost.

At $489 this adapter is a complete steal. It will outlast the camera and I am sure become a big factor in the Blackmagic camera landscape.

Blackmagic may have to bear in mind accommodating it on future revisions of their cameras. The optics are precision designed to match the current camera designs both in terms of sensor size and the physical housing of the sensors. The Blackmagic optimised Speed Boosters are one of the best reasons to own a Blackmagic camera and whenever the next models arrive I want to use them with Speed Boosters like these.

Then we get to the other reasons to own a Blackmagic camera – 12bit raw, ProRes, 2.5K resolution, 13 stops dynamic range and now an effective sensor size equal to Super 35mm, the BMCC is stunning in low light and lensing just became industry standard on it. Not bad for a camera costing under $2000 / 1500 EUR.

As for the Pocket Cinema Camera version, that’s now much easier to work with – a 1.74x crop close to the 1.6x of Canon APS-C and a big difference to the stock Super 16mm 2.88x crop sensor.

This magic comes at a very small price… There’s some ghosting and reflection to watch out for but it occurs only very occasionally in real world shooting. When I first used the Speed Booster, it was on E-mount where it turned the FS100 into a full frame video camera. I feel the new Speed Booster’s are better. The corners are sharper with these smaller crop sensors. Caldwell Optics have clearly been able to push more aggressively and it shows in the image.

Currently only Nikon lenses fit the Blackmagic orientated Speed Boosters (and Leica R glass when converted). There’s no sign of a Canon EF version yet. The EF mount is more accommodating of a wide range of glass like M42, Olympus OM and of course Nikon lenses themselves. But mainly I just want to use my Canon glass on a Micro Four Thirds mount Blackmagic camera. The 85mm F1.2L would be utterly mind-blowing on the new Speed Boosters.