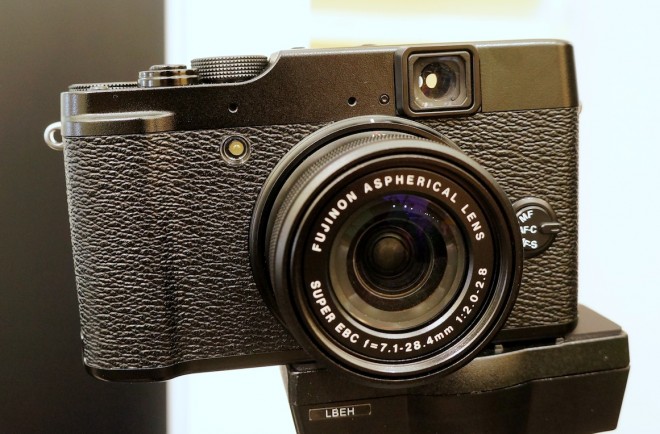 Fuji had a preproduction X10 (a baby X100) at the IFA show today. This is a superb compact which does 1080p and I think they have bettered the Canon G12.

The first thing I noticed was a lack of power button. In fact, the camera is turned on by rotating the lens zoom ring. The first stage of the rotation extends the lens from the body of the camera and switches the camera on. The lens is marked with focal length like a DSLR lens is, and it goes from the equivilent of 28 out to 112mm (4x zoom).

The X10 has a newly developed EXR CMOS sensor which is larger than all other compacts on the market. It’s a 2/3″ sensor, the same size as the RED Scarlet. This is however still significantly smaller than Micro Four Thirds, APS-C and S35. The camera isn’t overdosed on megapixels – 12MP is a good number and it will help low light performance. I am expecting this camera to be a significant cut above all the current compacts on the market in terms of image quality.

Exposure is controlled similarly to on a DSLR like the Canon 5D Mark II with two dials, one controls shutter speed and the other aperture. 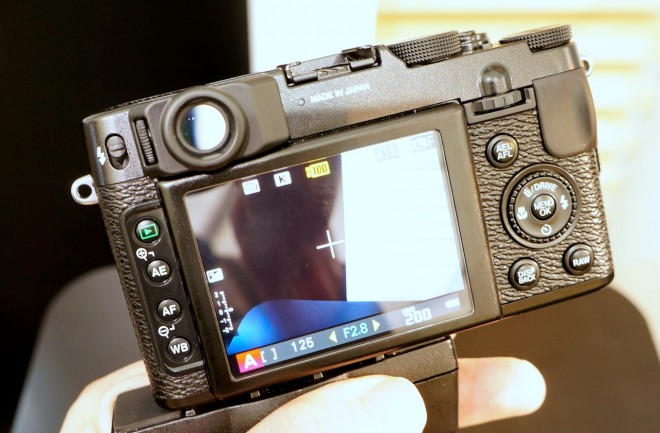 There’s an optical viewfinder which is one of the largest I’ve seen on a compact but of course it isn’t as large as an entry level DSLR viewfinder – you can see trend developing here! It’s like a rangefinder viewfinder and the barrel of the lens occupies one corner.

On the pre-production unit I found the menus to be easy to navigate but the rear dial wheel was rather loose and easy to knock. There’s no dedicated ISO button but you can assign ISO to either the Disp button on the back of the programmable button on the top. The shutter release button has a thread in it like the X100 although for all I know it is a stylistic thing not functional. 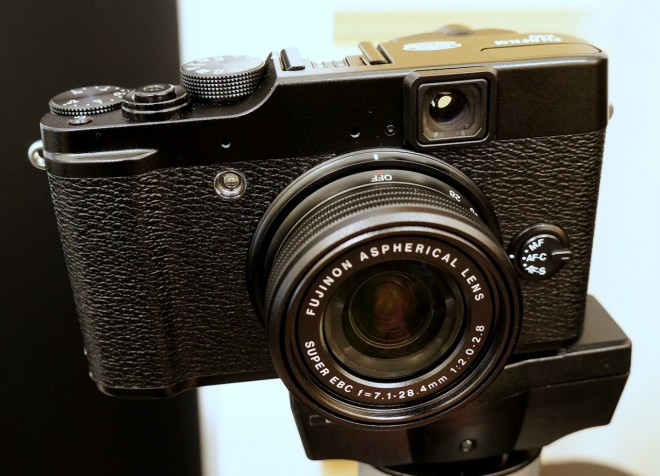 The lens is nice and sharp wide open at F2, and if you are focussing closely enough you can get plenty of shallow depth of field at F2 on the 2/3″ sensor. The actual focus length of the zoom lens is 7.1mm at the wide end, so that means the sensor is roughly half the size of the GH2’s – a 4x crop over full frame 35mm. However that’s still about 25% larger than the average 1/2.3″ compact sensor, like in the Sony HX9v.

Video looks similar to the GH2 in crop mode in terms of depth of field but there’s sadly no cinema standard 24p or 25p – only the smooth looking web format of 30p. Not great. Build quality however is very good, the top plate especially is very solid and the shutter button is alloy.

I can’t remark to much on image quality because this was a preproduction camera but I can offer a small insight.

Since I couldn’t take the camera somewhere dark to test true low light high ISO performance, I have slightly overexposed the ISO 800 shot on the camera to reveal more of the noise that lurks in the lows and mids, just as a true low light scene would reveal. Not perfect but it’s an accurate ‘rough idea’ if you like!

ISO 800 was very clean for a compact. Unfortunately I was limited to under ISO 1000 on the pre-production model, the final version will go to 12,800 extended and ISO 3200 in normal usage.

Here’s the full photo shot at 28mm F2. The lens is beautifully sharp wide open, as you can see from the 1:1 crop below. 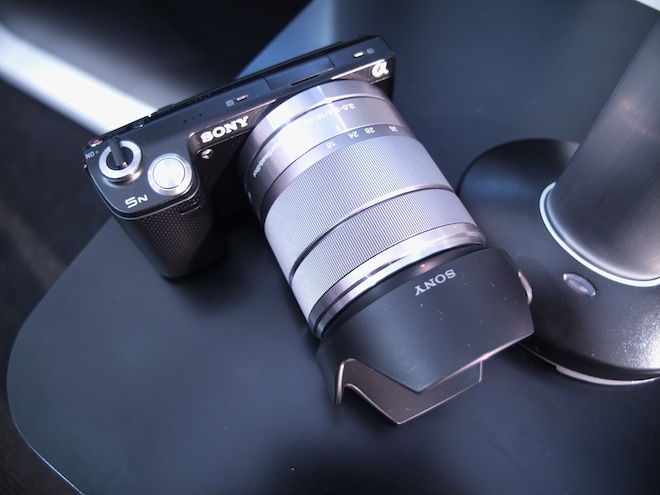 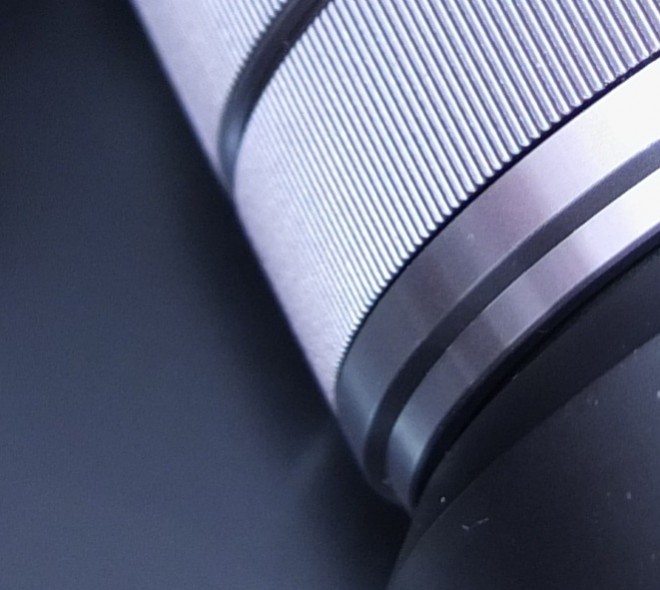 All in all I think Fuji is onto another winner here. With a price tag that is expected to be half that of the big X100, a pocketable form factor and a zoom lens – yet the same retro good looks and high build quality, this is going to be some compact.

There’s extensive manual control, although if I bought one I’d be using it more for stills and as a point and shoot rather than for video. The Sony HX9 compact has a more sophisticated video mode, a wider and longer lens and records to 1080/60p. But it can’t match the low light performance, fast lens, build quality, style or sensor size of the X10 for stills.