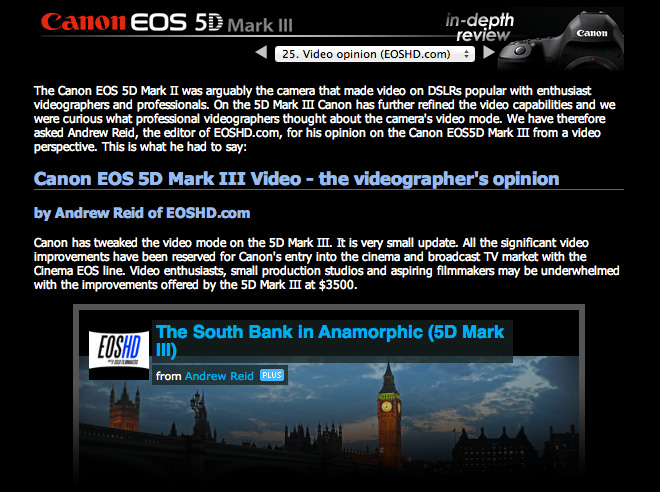 DPReview have now delivered their verdict on the 5D Mark III, with a contribution to the video section (as an independent voice) by myself, Andrew Reid. I felt it necessary to be frank over the shortcomings, as it is only right you are aware of them on a $3500 DSLR body. But do keep in mind that the 5D Mark III is still capable of stunning video, like the 5D Mark II before it but a little bit more refined.

Will any of this stop me shooting serious projects on the 5D Mark III? No of course not. It is still a lovely camera for video, like the 5D Mark II still is.

The positives about the 5D Mark III

The 5D Mark II has almost identical image quality in video mode to the 5D Mark III at ‘normal’ ISOs (though with the added worry over moire and aliasing on shots there it can be a problem). Though the 5D Mark II is a very old camera now, released at the end of 2008 the 2012 model is not an improvement in terms of 1080p – there’s effective resolution and there’s pixel count, and both haven’t really gone up!

The new Mark III is still awkward to shoot with bare bones (with no add-on monitor or EVF) because of the lack of articulated screen and no improvement to the primitive manual focus assist. Again in this sense, ergonomically it isn’t much different to the older, cheaper model.

Two headline grabbing specs – resolving power in both video / stills mode, and the quality of HDMI output – are better on the 5D Mark III’s chief rival the Nikon D800. Soon I’ll be comparing the Nikon D800 to the 5D Mark III with a hands on shoot in Berlin. Regular readers of EOSHD will have seen enough of the D800 to know that it resolves more detail in video mode and is much closer to an effective 1080p resolution rather than just a theoretical one (after sharpening in post!). What will be interesting here is whether my removal of the optical low pass filter can finally get the 5D Mark III on level terms with the D800, with none of the drawbacks of moire.

I’ve not seen an increase in moire since removing the anti-aliasing filter.

Zacuto’s new shootout is like the blind Pepsi challenge test. I once read that the boss of Pepsi, when asked to take the test himself, chose Coke. Indeed many seasoned pros who have their self esteem and money invested in such expensive gear were found back-tracking after mistakenly labelling the GH2 shot scene in Zacuto’s Revenge of the Great Camera Shootout as coming from the 5K RED EPIC.

Resolution is such a big issue. 1080p needs to be effective 1080p, otherwise you will notice the shortfall. This is why I’ve made such a big deal of this short coming on the 5D Mark III. It is a headline spec.

But there is another side to this, and that is that a softer look is a genuine creative tool and one that can suit certain scenes. It is about matching the aesthetic of the camera to the job at hand.

If the detail is resolved organically – and it is on the 5D Mark III with hardly detectable moire and very little aliasing – a soft image might not be a massive problem for certain shots.

In terms of the lesser of two evils, I’d prefer to have a softer image which is stable and organic rather than something which is sharp but very electronic looking with a lot of compression artefacts (like video from the Olympus OM-D EM5). That camera actually resolves as high a level of detail in 1080p as the GH2, but the codec (and possible lack of B-frame compression) as well as a low bitrate causes too much fuzz and mud. Add that to the recording format of 60i from a 30p-only sensor output and you get a very ‘video’ feel.