The Digital Bolex has stumbled into the world. It is alive. Now it must find a place for itself. Most importantly of all – is this new replicant Bolex actually convincing?

Time to find out.

A few weeks ago I had an email from Theo (below left), a filmmaker and EOSHD reader. Theo also happens to be the only Digital Bolex owner in Europe (well…the only one in Berlin…probably!?). So we took the D16 for a spin and shot a fun test. Frank Sauer and I handled the camera-work and the lovely Christina Mj Zahra (fashion designer) was our subject for the day at an abandoned Berlin beer factory, full of drunk ghosts. 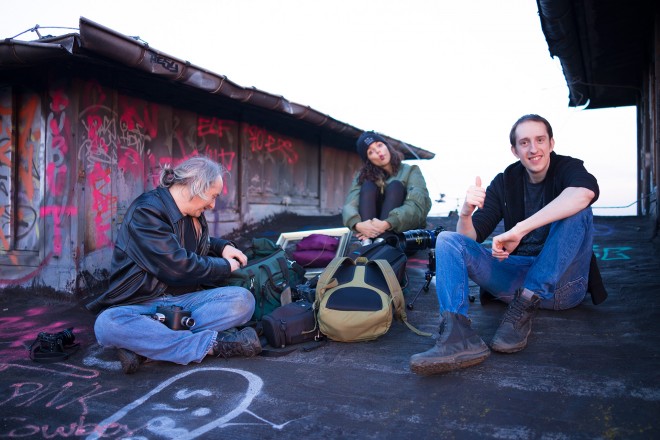 Above: left to right – Theo, Christina, myself (Andrew, EOSHD) 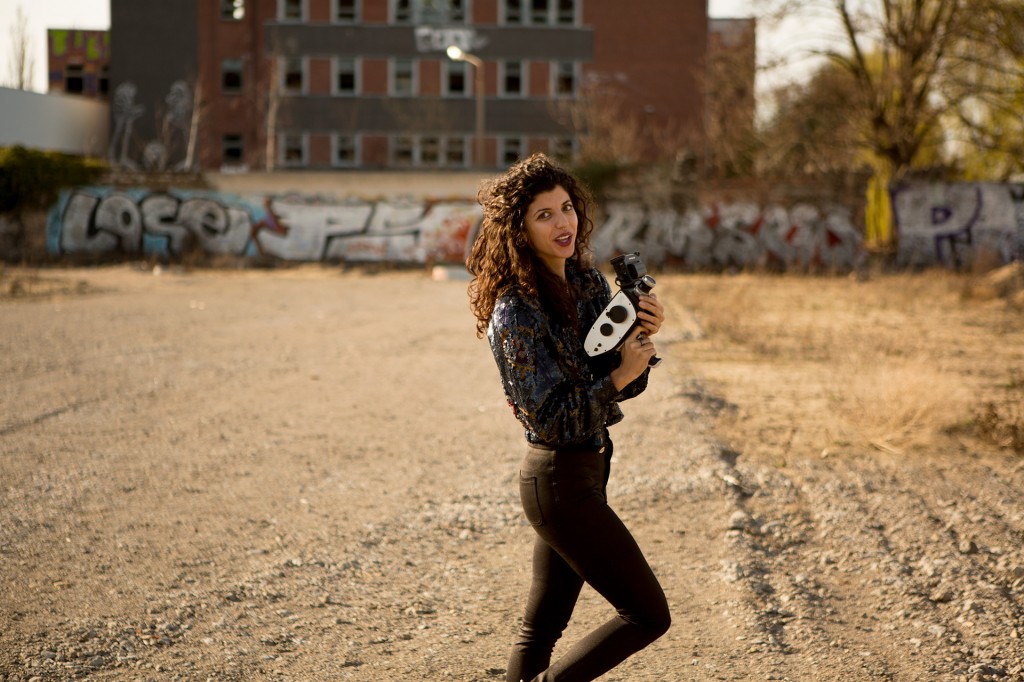 Above: Christina and The Only Digital Bolex In Europe Probably 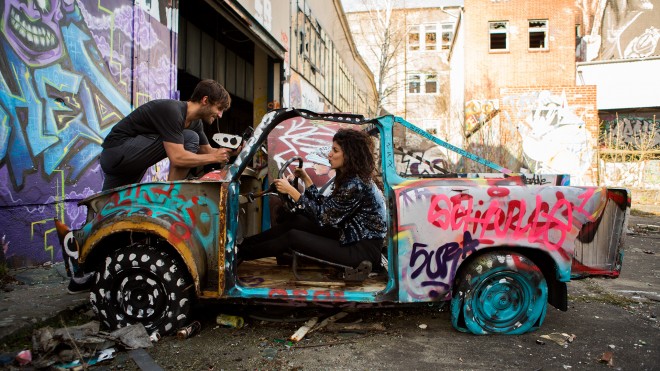 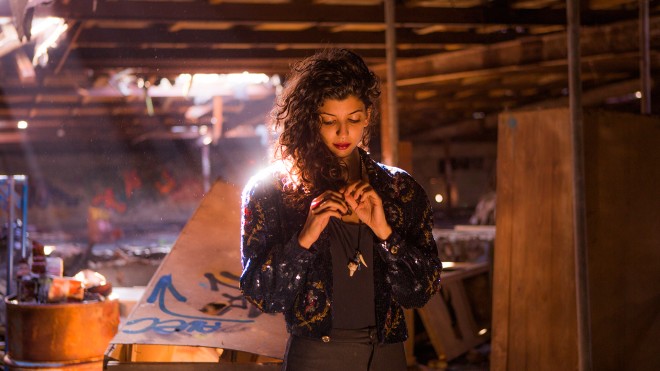 Above: Christina in a moment of reflection (and dazzling natural backlight)

The Digital Bolex D16 fills a big space in my bag for an art camera. It may not (yet) be a commercial filmmaker’s tool of choice (can’t do low light, lacks histogram, etc.) but this camera feels different to the others. The image feels analogue. A lot of that analogue feel is down to the Truesense (ex-Kodak) CCD sensor with global shutter in the D16. The vast majority of other cameras all have CMOS sensors since this is the way the camera industry cookie has crumbled.

CMOS technology is like the compact disc, CCD like vinyl. CCD is rawer, rougher, grainier, yet magical. What’s more the Digital Bolex team have really done justice to the sensor with their colour science and calibration. The raw Cinema DNG files from the D16 are a delight to look at straight off the camera without any grading. It isn’t just the image which gives this Bolex an authentic Super 16mm feel. I loved to use it handheld with just the pistol grip with trigger for record, and an EVF for composition.

A bunch of filmmakers love Super 16mm film. Darren Aronofsky (Black Swan) is one. Kathryn Bigelow (Hurt Locker) another. These are the names to bear in mind when someone on a forum somewhere says ‘small sensors are crap’. On this shoot we shot 5D Mark III and Digital Bolex. That’s Vistavision vs Super 16 in cinema terms so you can’t get much more different. Most of my favourite shots came off the Digital Bolex, but there were times when the full frame look won… The point being, everything has its place. 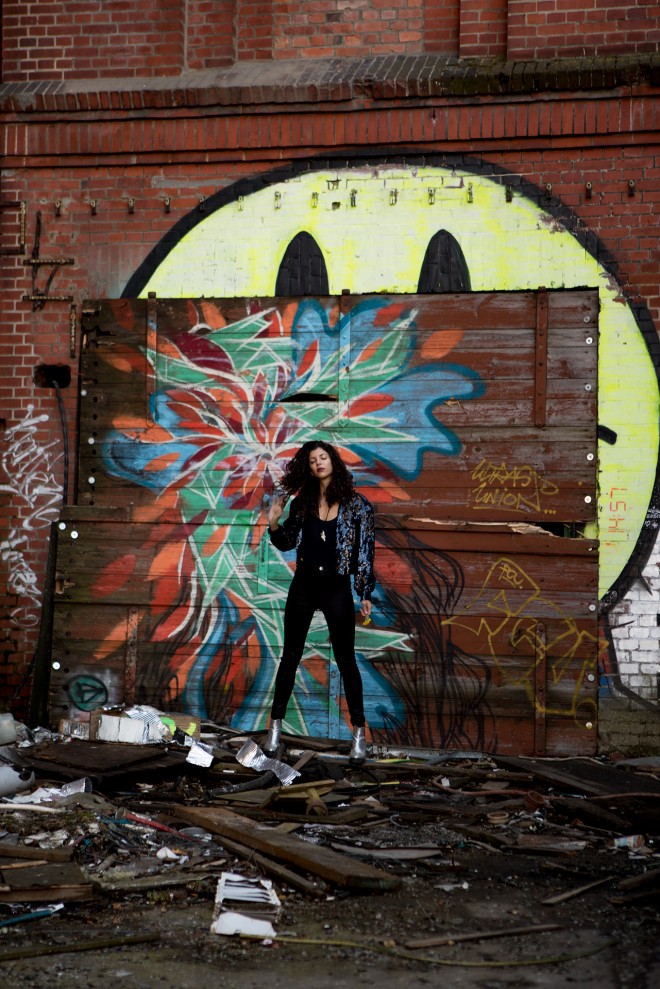 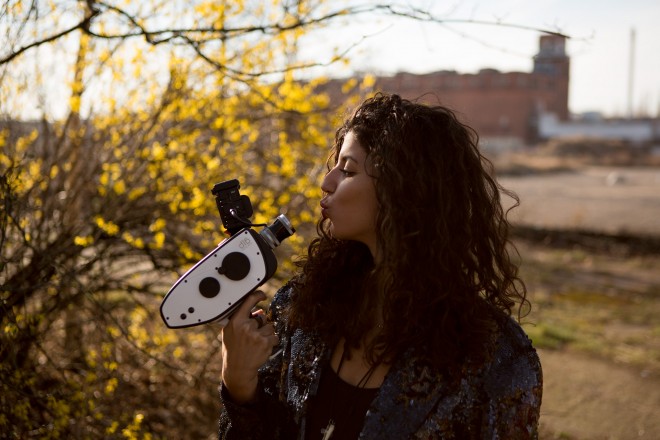 In Part 1 of this review I’ve edited my take on the shoot with the video above consisting only the Digital Bolex shots (none are from the 5D Mark III raw) and they are all ungraded. The workflow was simple – Cinema DNG straight into Resolve, set to Rec 709 colour and output to ProRes 422 HQ for editing in Adobe Premiere. No Film Convert was used in Premiere – these images already feels like film!

In part 2 Frank will have his edit ready and I can’t wait to see his take on it, the mood, the music, etc. This was such a fun and creative shoot.

Frank is going to do some grading to the raw in Resolve, so we’ll see how good it looks when raw is pushed a bit further.

Shooting with the D16

Focus is actually a lot more manageable on Super 16mm than on photographic full frame (5D) but you wouldn’t know it to shoot with the D16.

Truth be told we had a really hard time on this shoot getting our focus and exposure right.

These are such important things – why neglect them in the design!?

We used a Zacuto EVF via the HDMI port on the Bolex, but the HDMI output is way too soft for my needs… I was never too positive about focus as a result. The deep DOF of the Bolex also makes it more difficult to see when focus is just a bit out. With a shallow DOF you easily see where the focus plain is because there’s a huge amount of defocussed stuff around it and you see it move very clearly when racking focus. The focus aids on the Zacuto EVF didn’t help matters much – either too distracting or not effective.

Exposure was even more of a challenge because currently the Digital Bolex HDMI output clips the highlights and shadows A LOT. The CCD sensor introduces a further challenge – if you over expose the image falls off a cliff. To give you an example… Say you are exposing for F5.6 and ISO 200 and everything looks fine… without warning if you open up to F2.8 you may even lose the shot, boom, burnt image. Dynamic range is massive (13 stops) but you don’t expose from the middle, you expose from the top of the range. There’s not that margin of error you have with the Blackmagic Cinema Camera. 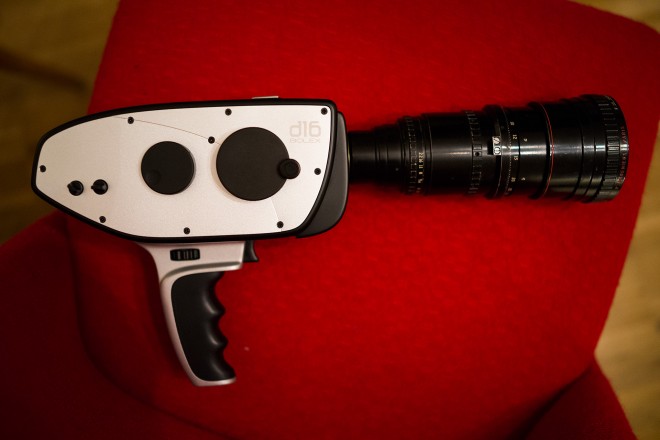 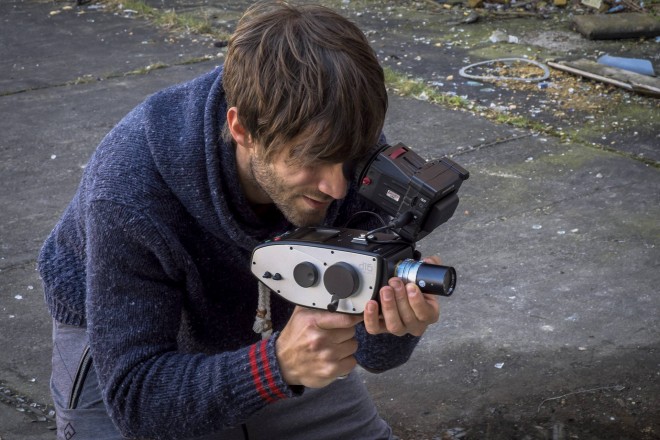 As Theo is a witness to, owning this camera is not the same as owning a DSLR or renting a C300. It feels almost like you’re invited into a family. People on the street want to chat. Girls sensibly ask what you use it for and the guys just want to know the spec 🙂 Suddenly you’re connected to other owners around the world through a niche online community and due to the relatively small numbers shipped so far, it’s quite an exclusive club – much like the one which formed around the Ikonoskop (which shares a very similar image and spec).

Some may not care about this, but I really like it.

I see a huge place for this camera but that place is not as a workhorse in the production industry – it is in the indie film / artistic community where the D16 is in its element. It is like a film stock with some hard to define magic. It isn’t a common look and you cannot easily mimic it with a CMOS sensor camera, especially when it comes to skin tones.

The D16 is extremely flattering of talent. Skin is pink and fleshy on the D16 when it is yellow and plastic on a DSLR. Even raw from the Blackmagic cameras or 5D Mark III does not look as authentically analogue and film-like as the output from the D16. It captures incredible subtleties in colour tone that seems to be lost somewhere in the A/D conversion of a CMOS sensor. A hazy evening sky looks more emotionally resonant on the D16.

Emotional colours and flattering skin – so important and worth paying for! The D16 is not exactly cheap at $3299 minimum but it is less than half the price of the Ikonoskop and not much more than a 5D Mark III. 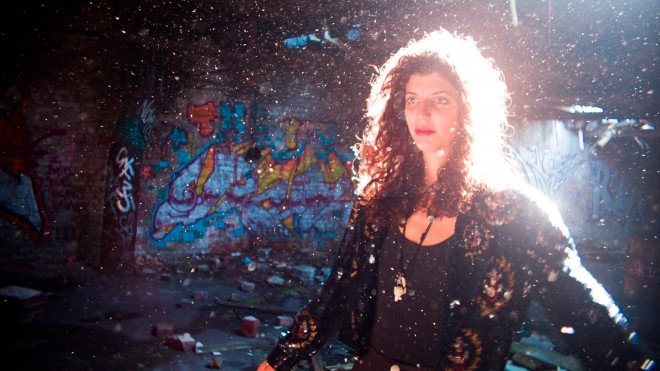 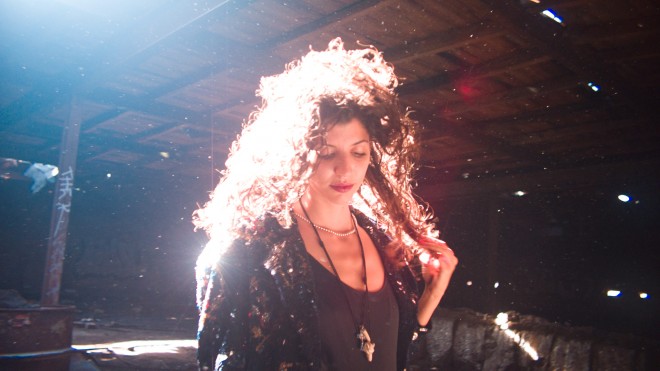 The D16 is not a perfect camera by any means and I’m afraid we must get down to the nitty gritty.

I teased Theo a bit when he complained about the D16’s many issues… by calling him The Moaning Investor 🙂 When you buy a D16 you feel like you are investing in the whole enterprise, actually giving Joe and Elle’s amazing venture a future. When you point out obvious possibly deal-breaking, shot-breaking, film-breaking problems it feels bad because you really want the Digital Bolex to succeed. Succeed I am sure it will, I think what all devs and engineers really want to hear are not empty platitudes but the flaws pointing out, and their level of severity from the user’s point of view highlighting pretty bluntly… 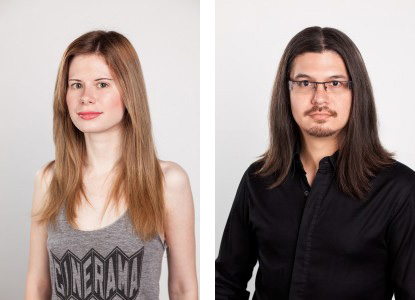 Above: Elle and Joe of Digital Bolex

First of all the image problems at this stage in firmware that Philip Bloom pointed out in his review are really a bit of a tip of the iceberg, sadly there’s a few more to report…

But you also have a quadrant stitching issue which leaves one side of the image slightly darker than the other. It’s VERY subtle but it does show up with a heavy grade, on frames which have a lot of sky in them.

In addition to that there’s an early quality control issue where the glass covering the sensor isn’t completely clean. Spots or dark smudges can show up at narrow apertures when the focus plain gets very close to the front of the sensor, say at F11 with a wide lens.

We also had quite a lot of chromatic aberrations but I suspect these are down to the RX type of Kern Paillard Switar c-mount lens I was using for some of the shots.

Our earlier test shots were full of the above problems which Theo wrote about at the Digital Bolex forum here.

The D16 also does not handle silhouetted subjects very well either… 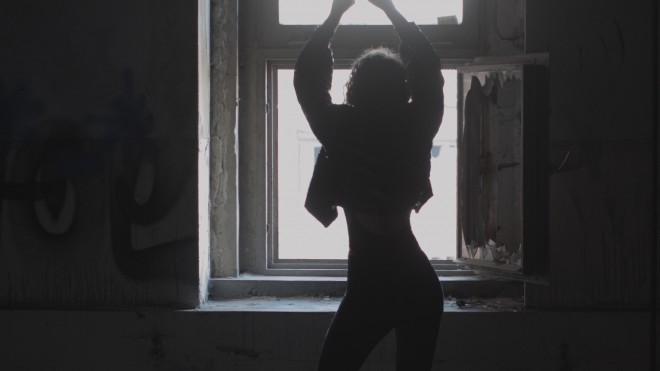 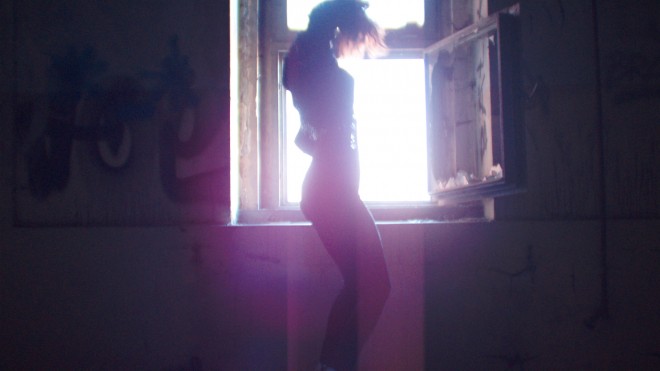 In terms of actually shooting with the D16 practically, the screen and the crank are the weakest parts of the spec. The screen would have been a really nice feature had it been usable for exposure, composition and focus but it isn’t – it’s usable as a menu but visibility and image quality is just too poor to act as a live-view display.

The D16 benefits from being used a certain way…

The crank handle is very easy to knock so if you have something like shutter angle assigned to it, it is asking for trouble in my view! The handle gives no precise feedback when it has changed a setting, the latency between the rotation of the crank and the setting changing is a problem. You wind the handle, then next year the setting changes on the display 🙂 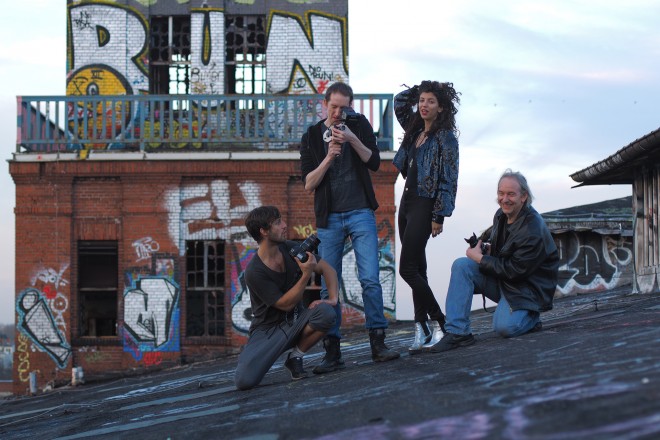 Above: from left to right, Frank, Andrew, Christina, Theo 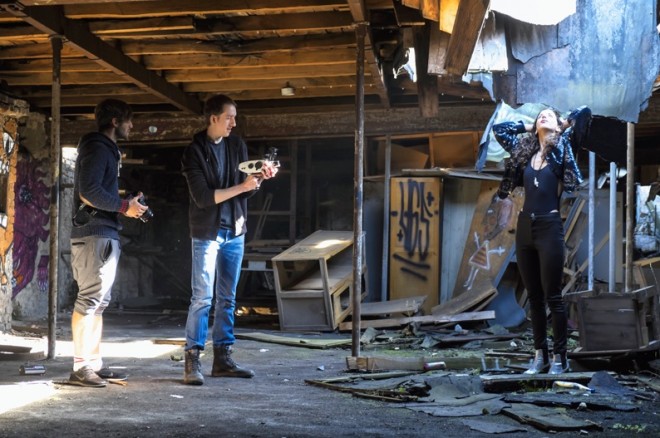 Above: Photo by Theo

This camera is ISO 200 native and you kind of need to stay there! You can apply noise reduction in post to get a usable image at up to 800. I don’t really recommend it because you lose some of the nice filmic qualities of the camera in doing too much digital post production on the image.

Below (click to enlarge to 2K) is a shot from the D16 which was accidentally underexposed by a huge 3 stops (approximately). Extreme example but it does show the power of raw. I lifted this 3 stops from the Cinema DNG in Resolve and applied noise reduction… 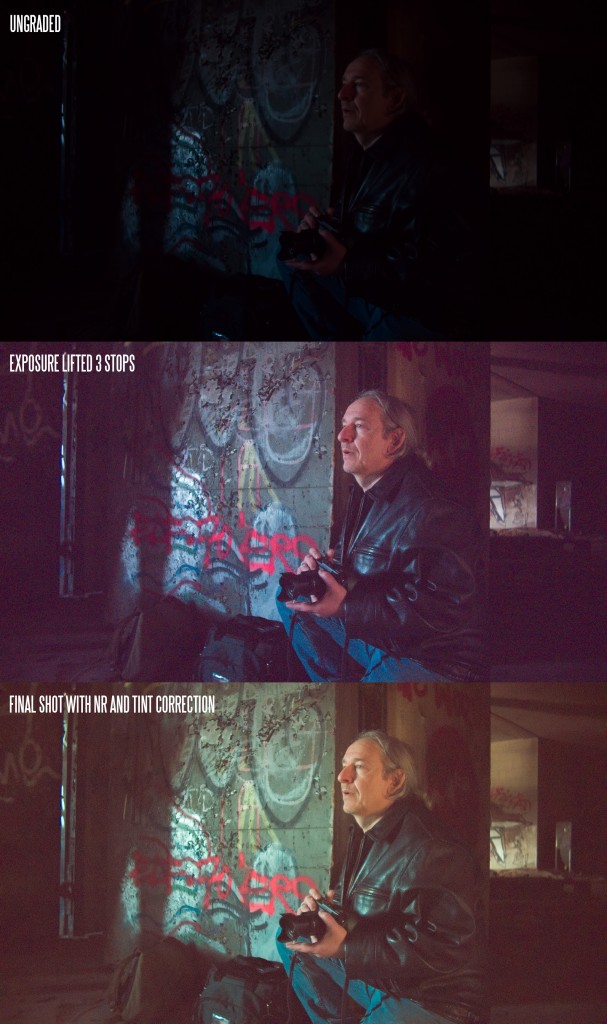 There’s a ton of magenta noise so that Resolve 10 noise filter is definitely needed, even just to restore the colour balance. You can always add film grain again later if the noise reduction makes for a plastic looking image. The good thing is with raw, that fine detail is maintained quite well when you apply noise reduction.

You feel 100% responsible for making this camera work even right down to how people view your material. Sadly Vimeo will not do it justice, which for me is quite a big problem. The authenticity of the footage is destroyed by compression. The texture changes, the colour adjusts, the analogue feeling gets digitised by the web.

Everything with the Digital Bolex takes a real artistic effort to make work… time, skill and certainly the right vintage c-mount lenses – which are getting expensive! 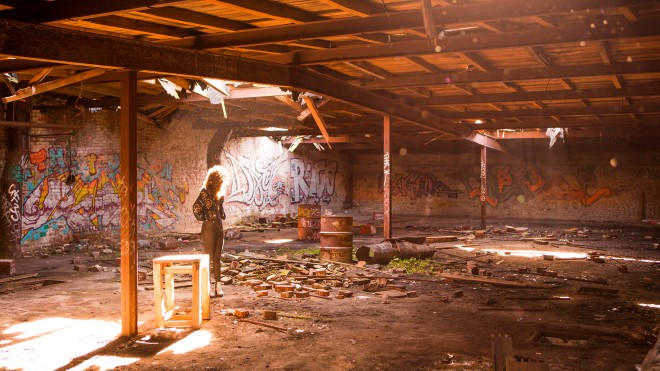 I enjoy it most with the pistol grip and trigger, with only a small EVF not a huge monitor attached. On a tripod it totally loses its charm for me, neither does it look as alluring. It really is an attractive camera with a big Angenieux vintage Super 16mm zoom attached and the pistol grip. With a smaller lens and huge tripod, the attractive silver metallic camera body becomes kind of lost.

It really is a Bolex then, as we know it, but with some of the convenience of digital recording. There’s no other way to pigeon hole this camera. It defies easy comparison to a host of other cameras even the Blackmagic Pocket Cinema Camera which has a similar sized sensor and shoots raw.

It makes my head flip upside down just thinking about it!

Stay tuned for part 2 later in the week and the conclusion. 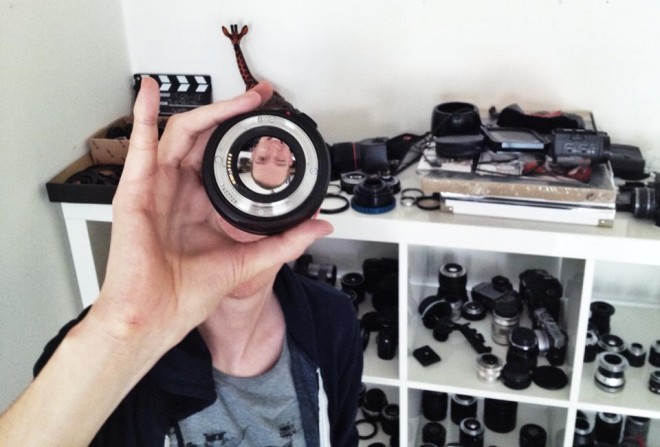 Above: photo by Frank Sauer