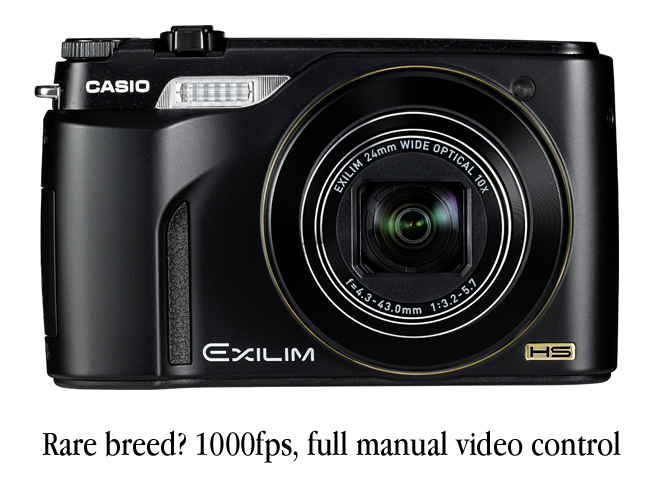 Buy the Panasonic LX5 on eBay

Now these are a rare breed. In this mini-review of the cameras (a prelude to full reviews coming later) I’ll look at what they have to offer.

Neither quite match the video quality of the Sony HX9v in video mode (the ‘v’ stands for Video in that model after all). But they do have some exciting features and are the only compacts on the market which allow full manual control in video mode.

When you need a pocketable easy to focus B-camera or covert shooting option for missions where video cameras (even a DSLR rig) are not allowed or not desirable, then these tiny compacts are perfect. Their point & shoot nature (even with the extra control) means that neither do you have to worry about rigging or focussing.

Manual control: In video mode the FH100 has an elegant sidebar menu which allows you to set shutter, aperture, ISO and other manual controls independently for stills and video. It is the compact camera where you can have the stills mode setup one way and video another to such a large degree. You have complete control over all aspects of the video mode, with a minimal shutter speed of 1/30. Although aperture is limited to either F3.2 or F7.5 since the camera uses an electronic ND filter rather than a variable iris in the lens, although the aperture does vary along the zoom range of 10x from F3.2 to F5.7.

Build quality: a notch above the usual compact, but a poor LCD with only 230k dots

Image quality: It’s good for a compact but don’t expect miracles! Video format is a not so desirable 720/30p and it has a fair bit of moire and especially aliasing. For stills the camera does at least have RAW but high ISO performance is below average, despite the lower megapixel count than many other modern compacts. Despite that where else are you going to get full manual control of video and 120-1000fps recording for this price, in a pocket camera? Incredible!!

Manual control: The video mode adheres to the PSAM dial. So unlike other compacts when you hit record the manual exposure settings in M mode stay put and automatic control does not take over. The LX5 features a CCD sensor so 1080p and higher frame rates are out of the question. But it does have pretty decent image quality, though in video mode the image is a bit softer than 720p on the Canon S95. In fact the S95 has a slight advantage in image quality across the board and slightly better high ISO performance, although only very slightly. Of course on the S95 you don’t get manual controls in video mode. The LX5 has RAW for stills, which are 10MP but multi-aspect, so shooting in 16:9 gives you a wider field of view and more megapixels than doing so on other compacts like the S95 which crops.

Other notable compacts (without manual control in video mode)

You can read all about this sensational compact here

The 300 HS has 1080/24p and it’s pretty good 1080p as well, good detail. The lens is 24mm F2.7 at it’s widest angle, more desirable than 28mm in my view. This compact is tiny but because of that the lens is slightly compromised. Corner sharpness is poor and it does not have the long zoom reach of the HX9v or Casio FH-100. In common with many other compacts in its class aperture is a slow F5.9 at the long 5x end of the zoom. Build quality however is superb, aluminium for the sexy red version and what feels like a 60D/600D style polycarbonate resin high grade plastic for the black version. Image quality is every bit in stills mode as the LX5, although the Canon S95 has a slight end in low light, mainly due to it’s faster F2 lens. This also throws in high speed shooting option as the model name suggests. HS video is 240fps at 480×320 but it lacks the higher resolution 120fps 640×480 of the Casio FH100.

If you want the IXUS 220 with a longer zoom, you have to sacrifice the 24mm wide angle. The 1000 HS has a good lens but it starts at 35mm – not very wide at all. That really is the only disappointing part of the 1000 HS, in most other ways it is a fantastic compact although the much higher specced Sony HX9v and Panasonic LX5 are more exotic and frankly more to write home about.

Canon’s high end compacts feature CCDs so they lack the 1080p and high speed shooting options of cheaper Canon models with CMOS sensors. They are slightly crisper in terms of image quality for stills especially at high ISOs, and the S95 features a fast F2 lens. The G12 is essentially the same but with more manual control dials and a much bigger body. They are however rather conservatively specced against more exotic compacts like the Sony HX9v despite the high price, and have seen only tiny incremental improvements year-on-year. It is rumoured the next update will switch to a new generation of CMOS sensor for a larger image quality gain – because frankly their image quality doesn’t quite justify the price, especially versus entry level DSLRs.