A great many have forgotten what an absolute beast the 5D Mark II is.

A power house of image quality with a massive sensor, Hollywood film sequences and entire episodes of prime time network TV have been shot on it purely for the way it looks. But it does have one big flaw.

This is now much reduced with the VAF-5D2. 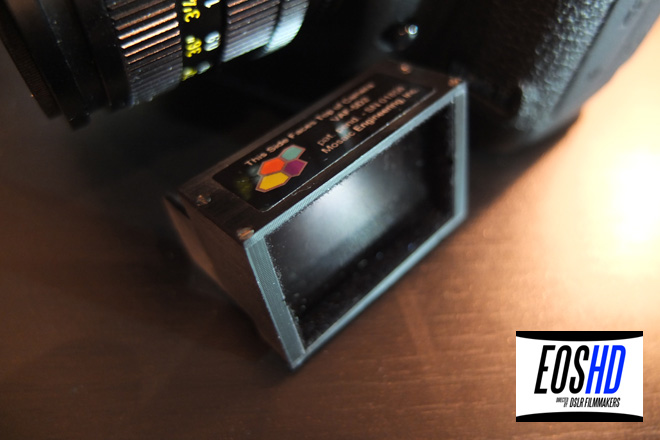 Mosaic Engineering sent me a sample of the VAF-5D2 a few weeks ago and I was excited to try it out.

As many of you will know I am a big fan of the GH2 because resolution and bitrates on it are insane. 1080p is liking a moving still. On the out of the box 5D Mark II however I find that the way aliasing causes detail to become weirdly animated and jumpy is very hard on the eyes. It also means you need to turn down the sharpness of the image processing all the way to ZERO in-camera and this, in my opinion, ruins the image.

The filter also has 3 big ‘bonus’ implications that many have missed so far.

One of the reasons the VAF-5D2 has not yet had the impact on filmmakers that it should have had is that for a few months production delays have meant that Mosaic Engineering have not been able to keep up with demand but they are now getting on top of things. Day by day the situation is improving and the lead time is now 5 weeks for new orders placed today. You can order the VAF-5D2 online here

Aliasing and moire is worse in motion where the edges shimmer and dance, making it even more distracting than it is in a still example shot on this page.

If you compare the softness of the muddy 5D Mark II shot below (and this is how most people have been using it so far!) to the GH2, it is a no contest. Low contrast, desaturated colour, and to make it worse there is more false colour and false detail on the gravel drive. 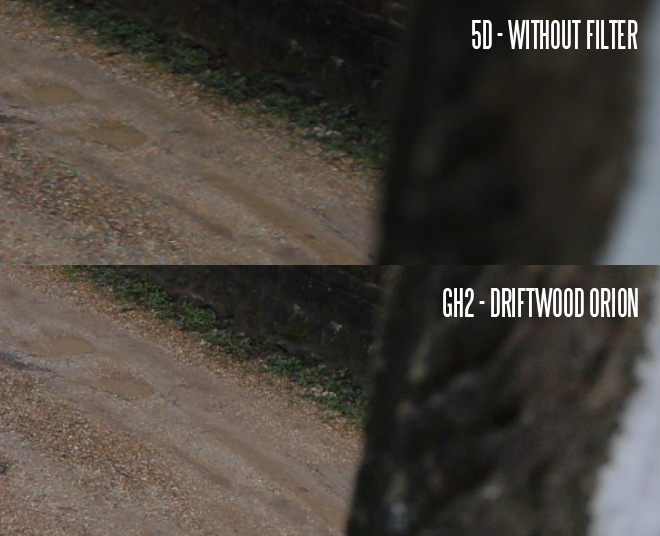 Now compare the detail of the 5D Mark II’s video output WITH the filter and high sharpness in-camera and without, on low sharpness. Big difference!

The good news is also that this detail is REAL and STABLE. It doesn’t jump around as much. 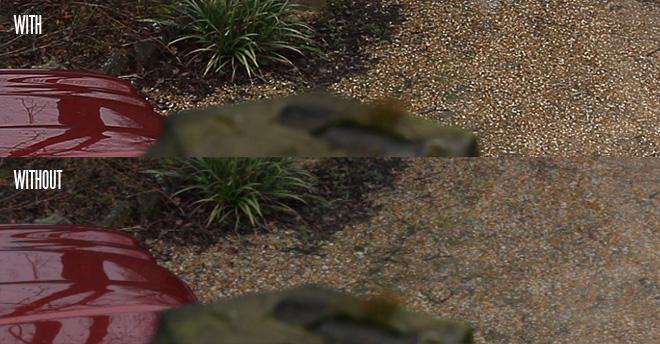 What isn’t as evident from looking at still frames is that without the filter you get a lot of false colour – like streaks of moving red and blue across the image. This looks very distracting in motion.

So it is not just the usual moire it reduces to the point where it is almost gone. It is all the other colour and detail related nasties as well!

Usually we’d dial down sharpness to zero on the 5D Mark II, as on other Canon DSLRs like the 7D. Below is a shot taken with sharpness on maximum which you’d NEVER do without the filter!

With the filter (top left) it actually looks fine on the trim of the Jaguar door – a reasonably smooth diagonal line. With sharpness turned down this high contrast white line is much fainter and muddy looking and with the filter applied the edges are almost as smooth as on the acclaimed GH2 which has very little noticeable aliasing on hard edges. 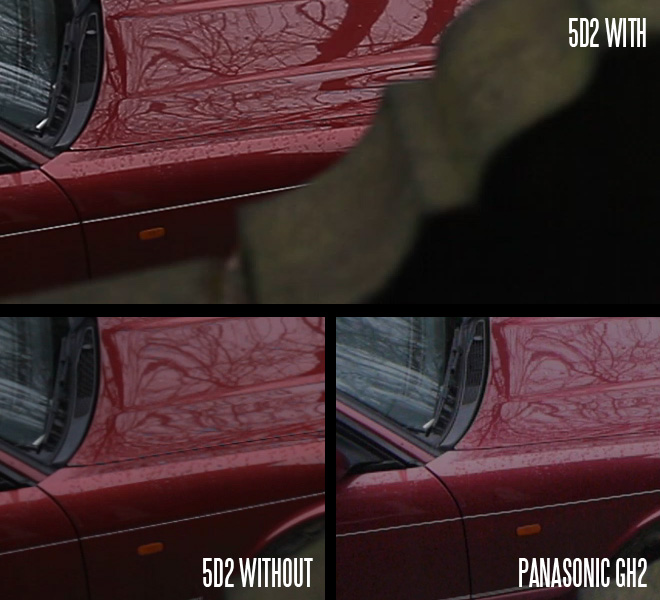 The GH2 is using Driftwood’s latest hack at 140Mbit+.

The 5D Mark II is kitted out with Magic Lantern Unified at 1.4x stock bitrate.

The VAF-5D2 is not without any side-affects, though the benefits to overall image quality far exceed the quibbles.

Some lenses like the Tokina 11-16mm F2.8 do not focus to infinity with the VAF-5D2 and other lenses – wider than 28mm – do tend to be quite soft at the edges (a vertical strip around 10% either side at 24mm is slightly out of focus).

Sometimes the edge softness at wide angle is very noticeable, sometimes barely. It depends on the shot.

Here is an illustration of optimal sharpness extent at wide angle on my Samyang 24mm F1.4 wide open compared to at the same aperture on the Samyang 35mm F1.4. At 35mm it isn’t really an issue and with most 50mm primes the frame is sharp edge to edge. 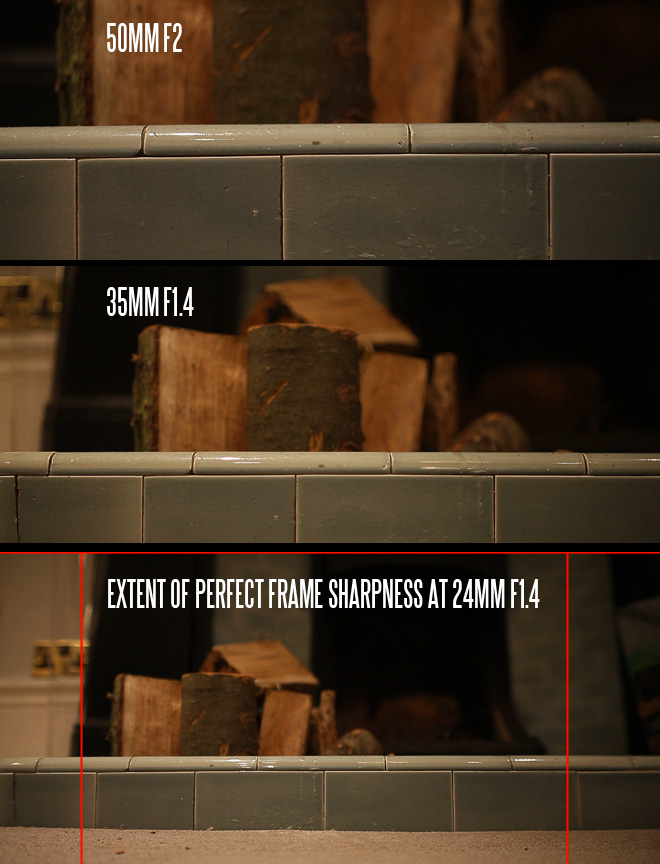 24mm is wide enough for me. Anything wider is a speciality shot not something I’d personally use on a regular basis. Wider than 20mm with this filter is not really very practical. But you may be able to get away with some interesting fish-eye shots where the edges aren’t sharp anyway.

The minimum focus distance (MFD) of the lens always changes with the filter inserted.

With my Leica R 50mm F2 for example it is a matter of around 20cm less close for macro. With other lenses it varies. So you won’t be able to get quite the macro performance with the filter as you would be able to without it, but it is by no means a massive issue – more like a 10-20% difference really.

At $385 the filter is quite a bit cheaper than the difference between the 5D Mark II and the Canon 1D X or forthcoming $3500 5D Mark 3. Yet it fixes a lot of the image processing issues that we’ve waited 3 and a half years for Canon themselves to fix.

The filter does enable more reliable high bitrates on the 5D Mark II. Though it is still not as stable as the GH2 when you increase the stock bitrate by half from 36Mbit to over 50Mbit it does help a lot having an anti-aliasing filter that removes false detail from the compression pipeline.

I recommend putting sharpness to medium or high with the VAF-5D2 and avoiding the soft zero sharpness image that we’ve put up with to date. The amount of real detail is definitely closer to 1080p at this setting with the anti-aliasing filter to soften the images than using the internal processing alone to soften the image. Though still not at the hacked GH2 level in terms of actual resolution (which itself is at the Canon C300 level so pretty spectacular!!) it now does come a lot closer than the way most people we shooting with it previously.

Overall the VAF-5D2 is highly recommended.