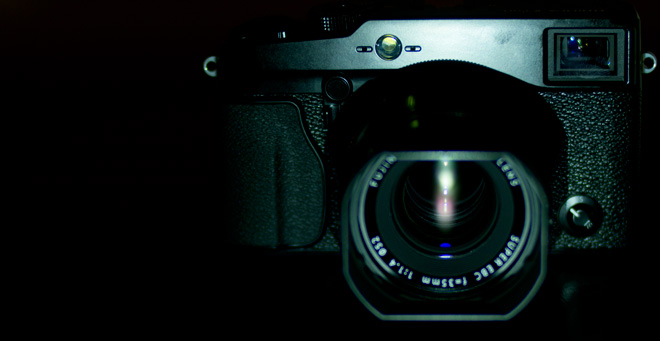 Canon have been on the record to say that the only rival they fear is Fuji (because of their expertise in sensors). Canon want to fear them and I want to like them. If only the GH2 was this good looking.

Unfortunately I am having quite a hard time liking my X-Pro 1 when she is sitting side by side with the superb Sony NEX 7.

Does it offer enough over the Sony NEX 7 to justify the price tag?

With the X-Pro 1, Fuji have randomised the bayer pattern to avoid moire and aliasing and therefore have been able to remove the anti-aliasing filter for higher resolving power. They’ve also created a sensor which does very respectable results at ISO 3200 and 6400.

The hybrid viewfinder is improved slightly from the older X100. Optically it is clearer and slightly larger. The EVF appears to have better contrast. The rear LCD screen is of the high resolution variety. The camera feels more responsive than the rather sluggish X100. The fiddly small rear click wheel has been replaced with a nice large d-pad, and the back rocker switch makes way for a dial. There’s now a proper grip and the camera is chunkier but it feels good in the hand. There’s also now a Q-menu for quicker access to settings.

It is also painted black with no logo on front, so you no longer have to tape up your camera logo – for reasons I never really understood. Having a black camera does not make you a cross between The Invisible Man and Henri Cartier Bresson. 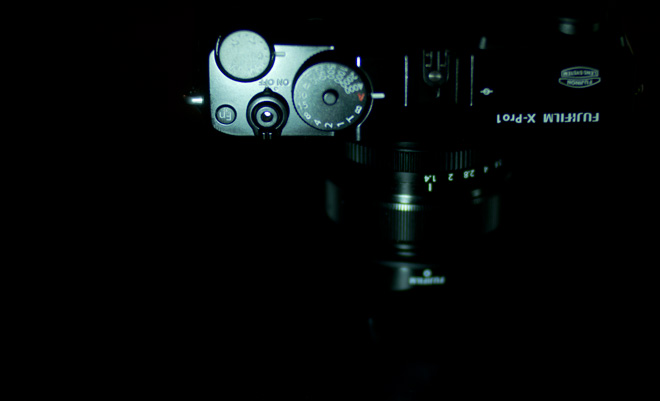 Not all the changes ergonomically are better than on the X100.

The RAW button has been removed. The front rocker switch which triggers the hybrid viewfinder and EVF display has inexplicably been turned upside down and feels far more awkwardly placed, being lower down and far too close to the barrel of the lens. For those who use their left eye to look through the viewfinder, a very bright green and orange LED is placed so that it is right in front of your right eye. When you open your right eye after taking a shot and move your head away from the camera, it is momentarily very unpleasant to have a flashing green light in your face. When the camera is munching on a JPEG you sure as hell know about it.

The shutter speed dial has a lock on top (like the Canon 60D’s mode dial) for people who think that a camera should compromise essential ergonomics which you use daily, to avoid accidental settings changes when it’s in your bag. Some logic that is!

Thankfully the lock only operates when the dial is placed in A (automatic) mode and not on every shutter setting.

It is extremely light compared to the Leica M9 or a DSLR. Everything from the body and lens to the battery is featherlight. To be honest, build quality feels a notch down from the Fuji X100 and shares more with the cheaper X10 compact but that is certainly not to say it’s bad. Fuji should be commended here. 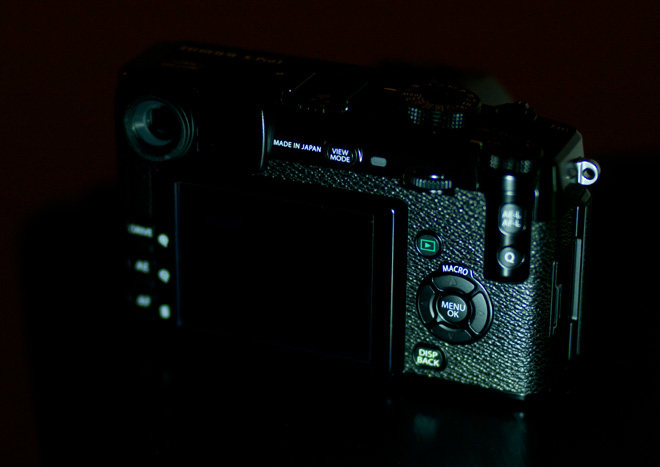 It is just I’m having trouble focussing lately, dear…

Olympus, Panasonic and Sony have made great strides with contrast detect auto-focus recently and the lens focus technology itself.

Olympus have responsive fly by wire manual focus rings that feel superb and AF which is quicker than phase detect in most situations. Their latest lenses, the 45mm F1.8 and 12mm F2 are internally focussing, and 100% silent with no moving front barrel. Bang up to date technology.

Most of Sony’s NEX lenses and Panasonic’s Micro Four Thirds are similarly advanced and have been for several years now.

I’m sorry but by comparison, AF on the X-Pro 1 is terrible.

The lenses don’t even have ultra-sonic motors let alone the internal focussing mechanisms of 2012.

It is like going back 5 years. The AF lens motor grinds and squeals like a squirrel caught in the wheels of a Land Rover.

The manual focus via fly-by-wire (what is wrong with mechanical?) feels about as natural as drinking a cup of tea upside down, and is just as painful.

The same was true in both these cases on the X100 but since Fuji are now charging £500-£600 per lens for the X-Pro 1 range, it is a travesty they have not come up with a better AF system and a better feel to MF. I am already yearning to get rid of the Fuji lens and use proper manual focus Leica M glass instead with their mechanical focus rings.

If AF is slow and primitive, it is even slower and primitive in macro mode. Unlike with the GH2, NEX 7 and Olympus OMG We’re Fiddling Our Accounts, whose lenses don’t need to enter a separate AF mode to achieve a close focus distance, the AF on the Fuji X-Pro 1 needs to be in macro mode like your 5 year old compact.

The lens hood – praised by some reviews as ‘a work of art’ – is also decisively wonky. Maybe they were thinking of a Picasso. It rotates to an unlocked position so easily it is as if a poltergeist is  in your bag. If anything needs a lock on it, it is the hood! When it is not actually falling off, it is simply wobbly. Not the kind of build quality you expect from a £1400 camera body and a £500 lens.

Fuji need to improve their movie functionality. At the moment, it is really just a feature that records live view to an SD card. But for some reason Fuji have stripped any kind of manual control over the image from movie mode. Image quality is not brilliant either in 1080/24p. Very heavy moire and aliasing with a lot of false detail. AF in this mode works – but is hunts more than Lord Hunting Hunt of Huntingdon. Granted, most people will not buy the Fuji X-Pro 1 for the movie mode, but Canon also thought that about the 5D Mark II before it was nominated for an Oscar.

It is a shame to see such a nice mirrorless mount and sensor not being utilised properly for moving images. 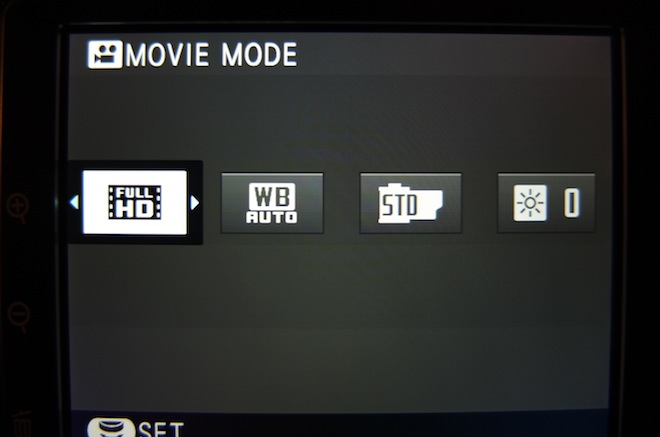 Above: the settings available in movie mode. Yes that is it!

In my view the NEX 7 has ruined the Fuji X party. Before the NEX 7, mirrorless cameras were quite low end (aside from the GH2), and none of them had a decent build quality apart from maybe the original GF1 which was a very good enthusiast’s camera.

Some say it is like having a cut-price Leica M9 and sure enough it is designed so closely to the rangefinder looks of an M9, Leica will be looking eagerly through their book of patents.

However, it isn’t really like having a Leica rangefinder because you cannot manually focus via the optical viewfinder and it isn’t full frame! Small point, or not!

It is tricky enough to manually focus on a Leica. However with the X-Pro 1 you need a tape measure! Get your friend to measure the distance your subject is from the lens and then try and match it using the hybrid display’s focus scale. Remind me again, is this 2012? As far as I can tell you don’t even get an AF confirm as you focus manually through the hybrid display, so you have to rely on the EVF or AF.

Overall, I am baffled by the overly positive coverage the X-Pro 1 has generated.

By no means is it a bad camera. I just cannot work out why you’d want to spend so much on something that is so clearly beaten by the much cheaper Sony NEX 7 in every department apart from the styling – and in some cases handling.

Is the NEX 7 a better option?

The NEX 7 has a far better video mode, very good manual controls, better AF and better manual focus. It has an articulated screen of the same resolution, a better EVF, a smaller body, with a wider range of lenses, some with optical image stabilisation (the X-Pro 1 lacks image stabilisation altogether be it in-camera or on the lens), peaking for MF and a wider range of features overall in the firmware.

In my opinion, the optical viewfinder is superseded by the OLED EVF and no amount of hybrid niceness can save it. 5 years ago, it was preferable to have an optical viewfinder because EVFs were rubbish. Now, it is the opposite. The hybrid viewfinder in the X-Pro 1 is barely any different from the X100 and doesn’t particularly suit the interchangeable lens format it is now paired with. The larger lenses get in the way for a start, as does your hand.

The sensor in the X-Pro 1 is a strong point. Although it is 16MP versus 24MP in the NEX 7 the X-Pro 1 is actually a higher resolution camera than 16MP suggests since it lacks an anti-aliasing filter over the sensor which softens the image slightly. But nobody can deny the NEX 7 lacks for resolution! High ISO performance, I have yet to test properly – but I’m expecting a win for the X-Pro 1 here. Their sensor technology is the envy of Japan and they are doing it all on a much smaller budget than Sony or Canon. Nikon meanwhile, don’t even produce the sensor in their mirrorless camera.

Fuji’s lens range has an enticing selection of focal lengths and apertures (18mm F2, 35mm F1.4 – which is the one I went for and 60mm F2.4 Macro), and they are pretty good optically. However, buying all 3 will set you back more than the camera itself!

Since I’ve only just bought the camera, these are by no means my final feelings. I just cannot see what such a highly priced camera offers over the NEX 7 other than retro styling and a 1970’s optical viewfinder with some 2012 trimmings. And I cannot see what the lenses and dated AF system offers over the Olympus 45mm F1.8 for Micro Four Thirds or Sony NEX 50mm F1.8 which cost half of what the Fuji optics do. Superior technology, for less money.

Maybe the overall experience from using this camera will make it all OK, maybe an X-Factor or ‘feel’ will win me over to it – as will image quality – these things are hugely important. Watch out for the full review soon.