Above: Camera Conspiracies has a point!

I’ve always been a big Panasonic shooter and no other company has done more to pioneer affordable 4K filmmaking.

However I shouldn’t let my love of Panasonic’s cameras like the GH5 and S1H blind me to the failures. 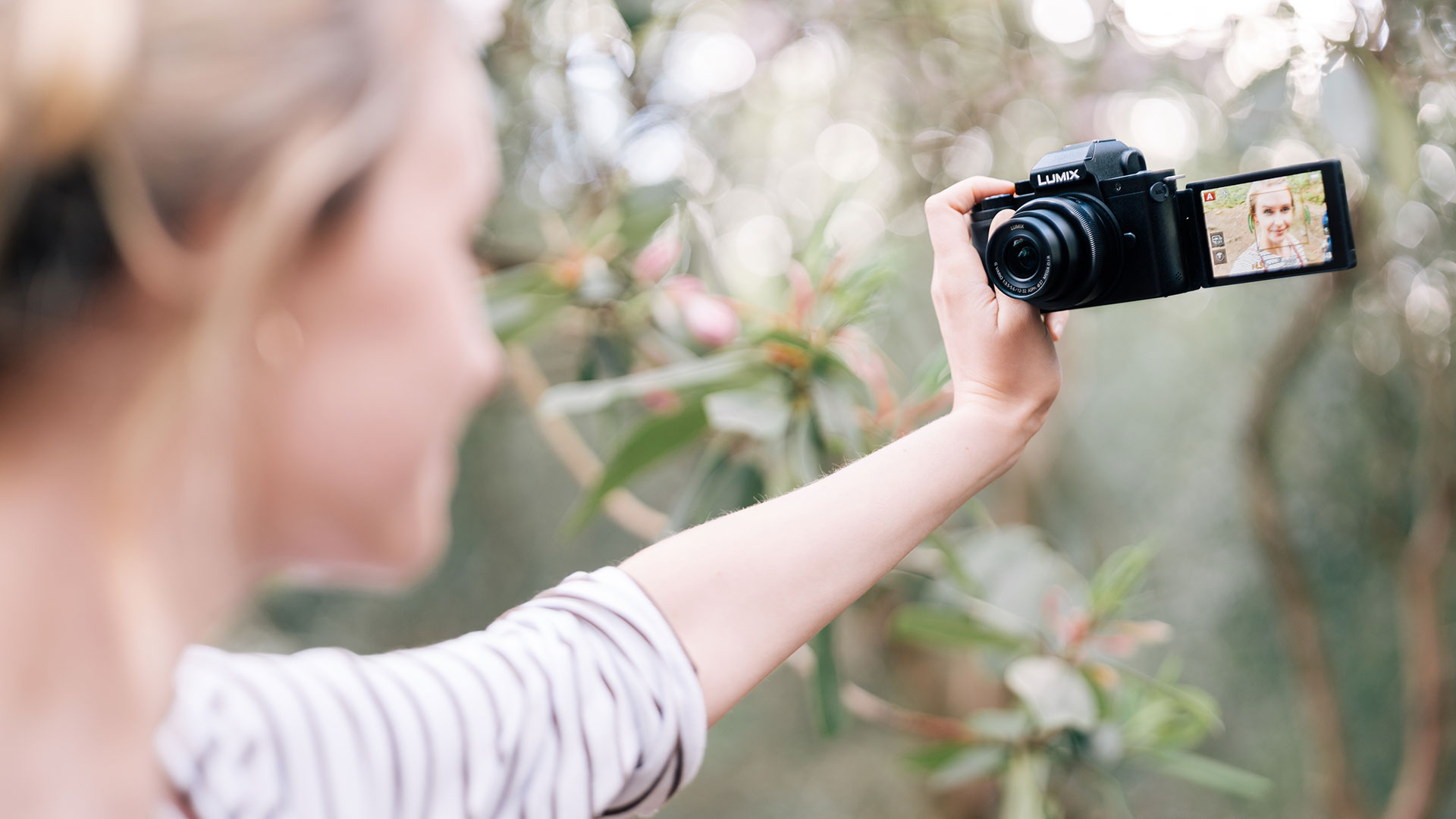 YouTube reviewers are persuasive. I own about 20 pairs of headphones from watching just one channel, Z Reviews – and that’s just in the space of two years.

Corporations realise this, which is why they are trying to turn every channel into a sales outlet. Not for these corporations, is the preservation of the internet’s integrity. Some influencers are decent and resist but actually many YouTuber’s are really up for this. There is no shortage of social media influencer wanting to curry favour Canon or Sony.

So it is easy to see where the G100 is so badly conceived. Panasonic probably asked influencers what they wanted!

‘Is a big crop in 4K that eliminates even a 12mm wide angle OK?’

‘YES of course! Great job Panasonic. Now, give me a free camera to test!’

‘Is it ok if there’s absolutely no way to monitor your audio?’

The only other way the G100 could have been so poorly conceived is if Panasonic did not consult at all.

The wrong target and marketing

In my opinion, it is as if the G100 was conceived by the same ugly marketing forces present in the unwatchable Cinema5D video above.

YouTubers and vloggers need great AF, IBIS, 4K without a crop for wide angle lenses, and they need to monitor their audio. The G100 does not have great AF, it does not have IBIS, the 4K has a massive crop and you can’t monitor your audio. So what exactly were they thinking?

Although camera companies realise that YouTubers now exist, what they don’t yet seem to realise is that YouTube is the next professional broadcast TV industry.

Unfortunately they are treating YouTubers like the next big consumer camera users.

Dumbing stuff down for them – when actually the real money long term is on professional vlogging equipment.

If I were myself to start a camera company today it would be to make professional broadcast tools for YouTubers and social media influencers.

Choosing the wrong target, in this case low-end consumer camera users with the cheap $750 G100 is only part of the reason why the G100 is so poorly conceived for the intended vlogging user – but it all starts with that price issue. Just $750 with lens. In order to meet this price Panasonic have made their lowest end Micro Four Thirds camera for a long time.

They would have been far better bringing out a special edition GH5S for YouTubers, with IBIS. The GH5S has the largest Micro Four Thirds sensor of all in 4K and the best in low light too.

And a lot more people besides are waiting for this sensor to come along in a GH6S body with IBIS since the original so bafflingly lacks it.

YouTuber’s need IBIS for the stuff shot outside their studios or homes. Panasonic will claim the G100 lacks IBIS to reduce the size of the camera. There is a miniature elephant in the room of this argument – the GX85 with IBIS was incredibly small and came out over 4 years ago for less than $700!

The GH5 is as we speak a HUGE YouTuber success story.

By sending out the message that Panasonic now have a dedicated YouTube / vlogger camera, they risk cannibalising GH5 sales.

If a vlogger actually believes the Panasonic marketing message and sees the price of the G100 – they may decide it is the better suited camera for vlogging and YouTube.

And boom goes a GH5 or G9 sale at a higher price.

Then there’s the YouTuber’s bread and butter work – things they ALL do and cannot do without – lengthy monologues to camera, live stream format videos even if pre-recorded, and interviews or talks with other YouTubers, artists or subjects of interest.

So what did Panasonic do? Yes, a 10 minute continuous record limit on the G100!

How in any shape or form did this make sense to the product planning department?

Who at Panasonic believes vloggers will overlook such limitations, even beginners in the market for a $750 consumer YouTube camera?

It is almost as if Panasonic is now playing a Canon game, with such arbitrary limited features on cheaper cameras making the up-sell to more expensive models like the GH5 much easier.

The thing is it doesn’t, it severely hurts the sales of the crippled device instead.

Panasonic are not on a roll so much as a tumble

Almost all of Panasonic’s cameras have issues at the moment which prevent wider acceptance.

Sigma and Fujifilm are rapidly becoming the thinking man’s choice and Canon is about to spring an 8K-themed resurgence from a position of not even bothering to compete on video specs. This is going to hurt Panasonic when the EOS R5 and R6 come out. If Sony finally get the A7S III out of the door, it will be a triple whammy at a critical time when Panasonic is trying to establish their full frame camera range.

I really like the S1 and S1H. They are great cameras, really unique in some regards – and the best, most cinematic images for the price. 6K ProRes RAW is a feat of engineering. But the broad acceptance of these new full frame wonders is really massively let down by the autofocus and lens pricing.

So many more Canon or Sony users would switch if they could put their EF lenses on an S1H and maintain Dual Pixel AF or Sony PDAF level performance in both stills and video mode.

People do not sell their entire investment in pro lenses just because a new body has been released.

It is just not reasonable to expect massive leaps of faith to new systems which don’t even have a mature line-up of optics.

If you were to replace (all at once) a full set of Canon or Sony lenses with the Panasonic equivalent, you’d be looking at $2500 alone just for the fast 50mm prime and a further $6000 for a few zooms!

Then there are huge gaps in the line-up compared to Canon EF but everything is at the same Canon L level prices.

When it comes to the G100 I do not think anything about it makes sense. Since 2016 Panasonic have had the perfect small vlogging camera for cheap. The Lumix G9. Flip screen, nice skin tones, good audio, IBIS, no crop in 4K mode and small & light too – indeed, it now even shoots 10bit and the GX85 before it is even smaller! With the addition of a fully flippy screen the old GX85 would have been a better vlogging / YouTube camera than the G100 with less of a crop in 4K. Let that sink in – this low-end Lumix would have been superior to 2020’s G100 too 4 years ago for $200 less!

Indeed you could say that 4 years ago was the right time to start focussing on the YouTube market with specific, well thought out cameras and accessories.

Instead, the G100 is (several) dollars short and a day late.

There are a lot of choices out there for vloggers. One of them is the Panasonic G9 and GH5 which tick all the boxes apart from best in class AF. It may not suit very casual beginners but they will use their smartphones anyway, so they’re a lost cause.

Whether we like it or not, YouTube is changing the camera market. We see a rise in importance of fully articulated screens coming to some models which perhaps should have stayed with a tilt screen. The Fuji X-T4 is one example in my opinion. YouTube’s influence is also being felt in terms of frame rates. 30p and 60p often seem like more of a priority for YouTubers than the cinema frame rate of 24p. The look of 30p or 60p (at regular playback speed) is not for me but I can see why it can be a preference for vloggers because it has the more “live” look to it (and the look of TV soap opera!). If we are to have dedicated cameras being made for these kinds of user, first an Sony RX100 series based effort dubbed ZV-1 and now the Panasonic G100, camera manufacturers should at least do their market research properly first.