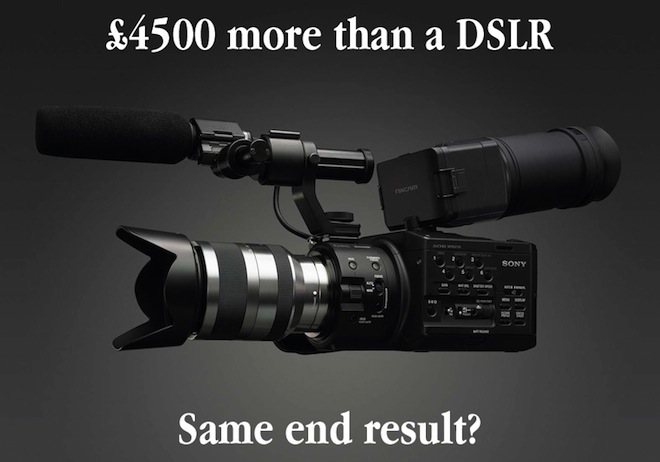 Is the FS100 (and F3 even more so) worth such a lot of money now DSLRs are in the game? EOSHD believes that for some people, yes they are. But the elephant in the room is that they produce the same end result for the audience, the same product. This is going to be quite a controversial article so please bear in mind the disclaimer that whether any camera is worth £5000 to you depends on your exact perspective and job. (For example high build quality is essential for rental houses, but is not something that effects the end result).

The purchasing mindset of a pro is very different to consumers or artists when it comes to buying gear. Professionals run a business and they factor in the price to what the expect to earn from using something. Therefore, the price is dwarfed by the need to have the right tool, at all costs. Most professionals, then, would be served well by the features of the F3 or FS100 over a DSLR, but I am convinced of three critical elephants in the room:

Manufacturers have taken note of this ‘professional mindset’ of course, and they know that in this market they can put massive mark-up on the smallest of additions. Even in the prosumer and enthusiast market, Sony are playing this game.

Look for example at the NEX 5 mirrorless ‘digi-cam’ versus the prosumer video NEX VG10 – inside the hardware is practically identical. The differences are not material, they are artificial. For example the NEX5 applies a 25% crop when video mode is activated, so that customers serious about video will be forced into paying more for the VG10. Sony sell the same sensor and basically the same hardware in the boxy VG10 for £1800 whilst the NEX5 is £400, but Sony know how critical manual controls and proper framing are to video shooters. It does not however cost them 4x more to make.

Sony also know that this trick works with professionals too. In one corner we have the FS100 and in the other corner the F3. Again the same core hardware – very similar mainboard, firmware and sensor but in a different package. 10bit instead of 8bit, durable build instead of a consumer grade plastic, HD-SDI instead of HDMI, the list goes on. But the RRP difference is huge considering the core technological components and manufacturing costs – which are very similar.

Patents recently revealed that Nikon and Tamron filed a lens design jointly. They had collaborated on the design and intended to release the same lens, one with a Tamron badge and one with a Nikon badge. The Nikon version had a price double that of the Tamron lens. So if you have any doubt that this is the game being played, do some research and it is quite an eye opener.

Now we have all seen the practical results from DSLRs and that they are indistinguishable in some cases from even 35mm film when displayed properly to an audience who is more interested in watching the film than pixel peeping. And we are only on the 1st generation hardware, still.

DSLRs have that aesthetic that we’ve come to associate with ‘professionally’ shot video and film. There is no denying it, despite the moire, despite the aliasing, despite the lack of ginormous buttons on a side panel somewhere.

At this level all the footage looks good if it is shot well and the subject is visually appealing. Furthermore the rough edges of DSLR footage is glossed over when projected cinematically onto the big screen. A laptop screen is much more critical, and at the same time a laptop screen puts a pall over the technically superior footage from more expensive cameras, and it is sadly on laptop screens via the internet where almost all footage is being digested by the end user! There is absolutely no point shooting a web promo, web music video or online advert, viral or short film on anything more than a DSLR – nobody will be able to see the difference. Most people barely even open web video full screen and at 1080p.

On TV too – resolution, aliasing and moire is added by cable content compression in most cases, and the flawless uncompressed 4-2-2 output of an F3 suddenly means jack shit.

For artists who want their work to be timeless and projected in the future on 4K projectors or into the home in a magical uncompressed 4K stream into some future 75″ TV set, it might – just might – be worth upgrading from a DSLR for image quality purposes. That’s why Tom Lowe shoots with an EPIC.

The rest is simply in our minds.

So let’s get practical and let’s get real – what does the £5000 spent on a Sony FS100 get you over a £800 Panasonic GH2? More resolution? No – both do a pretty good job on that front. A better codec? Sure, but hardly anybody will be watching it in it’s original high bitrate form, especially not over the internet or on TV. Better ergonomics? A place to balance your tea cup, maybe – I don’t know about you but I can shoot good looking video without desperately scrambling for traditional EX3 style video controls, and I am sure it was the last thing on Danfung Dennis’s mind when he shot with the 5D Mk II in Afghanistan, which oddly enough looks cinematic enough to be nominated for Cannes.

Again that reality check hits us…

Unlike in the days of standard definition Sony Handycams and the high end 3CCD broadcast video cameras, I am struggling to get excited about throwing that kind of extra money around when the DSLRs are so damn near bang on aesthetically in every essential way that really matters. They are so far from the small chip rubbish we had 3 years ago. Had we no large sensor, no manual control or 24p, maybe I’d have had my hand forced.

Sony tried to force our hands by so wretchedly crippling their DSLR video functionality.

Fortunately for us Panasonic and Canon didn’t take that approach and we have our GH2s, 550Ds and 5D Mark IIs which can stand side by side with cameras costing 10x more.

Now I am sure I will get a lot of criticism about this article with disgruntled people scribbling feature ists longer than my arm that show what the FS100 ‘does’ that the 5D Mark II ‘does not’, but in the end guys – they both shoot great looking video and those lists will only reinforce my point that people get too wrapped up in extra features and technical improvements, that really doesn’t dramatically effect the end result. Instead show me a video that you think could only have been made with those features present, and I will show you the same standard of video shot on a DSLR which was made in 2 evenings by a talented one-man crew and probably looks even better.

If you had given me a consumer camcorder 5 years ago and told me it would achieve results like a crew operating a 35mm cinema camera, I’d have stared at you like you were quite possibly mad. Not so any more with DSLRs.