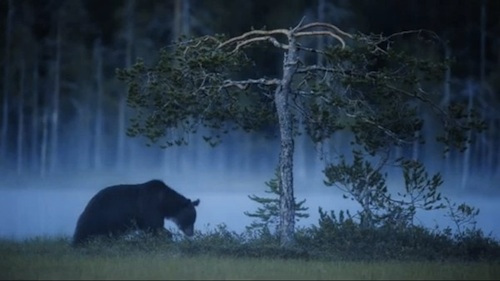 As the Canon 5D Mark II and Nikon D3S show, full frame may be winning now – but do we really need it?

Recently I was comparing sample photos from the Canon G11 to the Panasonic GF1, I found that at ISO 3200 the G11 was almost matching the GF1 for resolution, detail, colour and noise simply through virtue of having a very sensitive imager and very intelligent noise control… from a sensor the size of a baby’s pinky finger.

As many of you will know who watched Episode 2, the full frame Nikon D3S was astonishingly good at high ISOs. Canon’s best-selling beast the 5D Mark II features a huge 22MP count. Far more than chief rival the Nikon D3S which is pegged back at 12. The 1D Mark IV has 18, and the result is that both cameras cannot compete with the Nikon in terms of noise.

The other dark horse was the Panasonic GH1 at ISO 1250 – which was virtually indistinguishable from the full frame Canon 5D Mark II at the same ISO, something which wasn’t dwelled on at all, or even really mentioned.

It’s not that the 5D Mark II isn’t one of the best cameras in the world, it’s just that behind it there are some very dark horses doing some interesting and rebellious things, and as an overall package the GH1 is simply a better video camera – at least in my opinion and experience of both. The 5D Mark II has in this case been completely overshadowed in video land by a DSLR which cannot do video properly and a Lumix toy painted red.

Let’s face it – for all it’s well deserved acclaim, huge sales and deep respect from professional directors of photography from the bottom rung of the ladder to the top, it is vastly overrated by professionals compared to the virtually ignored GH1.

Why is the D3S so sensitive?

The Nikon D3S comes to the test described by Ken Rockwell as ‘the pig in the party’. A bit of a premature comment don’t you think! It’s a worse all-round video camera than the Canons, but one of the reasons it’s so good at high ISOs is because it’s got a large sensor and a comparatively low pixel count, meaning a low pixel density and larger photosites.

But this ignores one crucial element.

It’s still using 10MP more pixels than it needs to for video. That’s a huge amount. You could therefore shrink the sensor to Micro 4/3rds size and give it something in the region of 4MP, for the same results at high ISOs – the same sized pixels – and yet still have 2MP going spare!

At times like these, it really is difficult to understand what advantages full frame brings to the video table when a compact sensor can come close to matching a APS-C sized one at ISO 3200, when a Micro 4/3rds sensor can compete with a full frame sensor like in the 5D Mark II – the signs look bad for full frame as a future video standard.

And then they’re the practicalities

Many young filmmakers are taking the 5D Mark II and shooting great stuff. But then they come to use it on a set in challenging light, with a bright lens, they’re finding the extremely shallow depth of field totally impractical. Unless an actor hits their marks perfectly, to the millimetre, there is a good chance they’re going to look a bit soft with a full frame sensor at F1.4 (unless you have a trained ninja on the follow focus!)

On a Canon 550D, 7D or Panasonic GH1 the smaller sensor allows you to run a faster aperture without impractically shallow depth of field. This is a huge low light advantage over a densely packed light-greedy 22MP full frame sensor and yet you can have as much depth of field as you like, by using a faster lens – Noktor 50mm F0.95 springs to mind, or even just a longer focal length.

Who needs a large sensor when you have to alternative ways of achieving shallow depth of field? Even at F4, 20mm – the GH1 and 7D have pleasingly shallow enough depth of field.

• Sensitivity is becoming more important than sensor size.
• Resolution is becoming less important for almost everyone, the folly is over!
• Video has hit the scene, whether the stills-only guys want it in their DSLRs or not!

Recently there has been a shift in the camera industry back to sanity, and the hype around full frame will be the next to recede. Customer’s are now much more knowledgeable and tired of being flogged just a bigger number on the box. They want new treats. New specs. Panasonic are planning a High Sensitivity range of sensors, the first of which will appear in the LX4 at Photokina! That’s the good news – the bad news is that they also have a 20MP compact on the roadmap! But at least we have a choice – that’s the key thing. Before we…well…didn’t.

Lower megapixels are undoubtably the right approach for video in HDSLRs, but they’re are predominantly stills cameras. Can photographers live with 12MP, or even just 6?! Well because of the way images are used and distributed today, yes they can.

Take the paparazzi – most newspapers and media giants would rather a photographer got the shot even in dark light, than deliver one in all it’s 22 megapixel glory when it’s simply going to be printed at postcard size in a magazine or newspaper – or distributed at stupidly low resolution on the web.

Take artists and filmmakers – they’re fascinated by being able to shoot in light conditions they never dreamed possible.

Endlessly expanding resolution and sensor size is a dead end for all but a very small niche of professional studio cameras. There is reason evolution settled on the small size it did for human eyes. Any bigger and it’s waste. Nature abhores waste, and so do camera manufacturers. There isn’t a chance full frame will feature in future HDSLRs or video cameras if it doesn’t benefit video.

Maybe we’ll know have an ISO race – but at least now we have a race which actually improves HDSLR video image quality rather than degrades it.