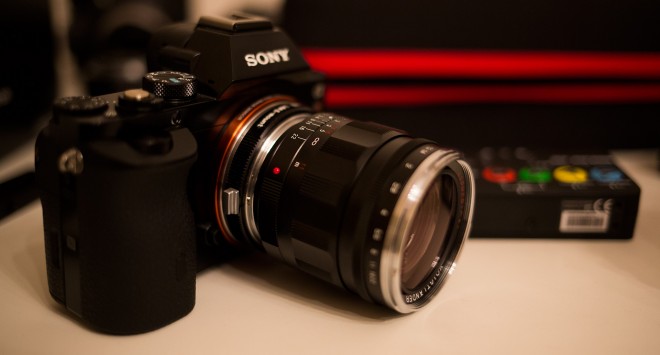 The A7S is so close to being a ‘complete’ system for high end video quality in a small prosumer camera, but there’s one issue that has quite rightly been highlighted by filmmakers such as Andrew Wonder and that is the rolling shutter distortion. The A7S actually has a very fast sensor with high efficiency made possible by the latest technology but because it does not skip any lines when reading out the image the net result is a scan that takes roughly as long as the older 5D Mark II, which does line-skip.

Sony plan to fix this by introducing a new sensor technology which can read entire lines of pixels in batches of 4 simultaneously.

Essentially the sensor will expose 4 rows at once but then the readout transitions between rows as normal but with a much smaller time gap between rows, and so it goes on and on down the sensor until the entire image is exposed.

Rolling shutter CMOS sensors do not have the front-side circuitry for a global shutter which means more room for light capture and better sensitivity. They also have faster readout speeds overall than CCD sensors which don’t have a rolling shutter but expose all pixels at once, which is why super-high frame rates can only currently be offered by CMOS sensors and not CCD.

At the moment the current consumer CMOS sensors would overheat if pushed to the fast rolling shutter speeds of their professional cinema camera counterparts like the Alexa or Epic. Small cameras like the A7S lack the required space and cooling on the body to disperse the heat. Panasonic currently have the most advanced heat dispersion technology on their consumer cameras and very high efficiency image processors which is a major reason why the GH4 can do 4k internally but the A7S cannot.

Some of the criticism aimed at Sony for the lack of internal 4K on the A7S and the rolling shutter distortion suggests Sony have crippled the camera to protect their higher end professional CineAlta line but actually the technology is the limiting factor and Sony are pushing it to the very boundary.

Sony though are not the only company to work on reducing rolling shutter distortion. Apple supplier Omnivision are also working on a technique, and Samsung are working on hardware / sensor based correction of the distortion. The technical details can all be had at Image Sensors World.

The first method is to switch to APS-C mode where rolling shutter is similar to the A6000 or other modern mirrorless camera and far less noticeable, then add a Metabones Speed Booster for the full frame rendering of your lenses. The second method is simply to fix it in post using the Rolling Shutter effect in Premiere Pro CC.

In APS-C mode you still gain the advantages of a full pixel readout, no line-skipping and less moire than the A6000 along with better low light performance of course. Considering how the A6000 was already a very nice capable camera, that’s to be welcomed although of course the A7S is far more expensive.

I still haven’t shot with the A7S myself though my camera is scheduled to arrive in Berlin on Monday. From then on you will be seeing a much more hands-on approach to one of the most interesting cameras to come out so far in 2014. I’ll cover rolling shutter in detail next week.

From what I have seen so far, do I recommend the A7S? Well I think the image reminds me of the C300 but this is a $2499 camera not $15,000. Also you have the option of 4K output of course with the $2000 Shogun coming in September from Atomos while the C500 would set you back over $30,000 including a compatible 4K raw recorder. The FS700 has a 4K output but it is not YUV but raw so much larger file sizes and again a more expensive recorder!

I think if there has to be a trade off somewhere for all this on the A7S, then 5D Mark II levels of rolling shutter is not too horrible a trade off. With so many shots it won’t even be noticeable. Just look at the amount of beautiful 5D Mark II stuff out there already and try to think how much of that was broken by rolling shutter skew – hardly any. What’s important is that Sony are working on fixing it, and as these patents show, they are doing so.