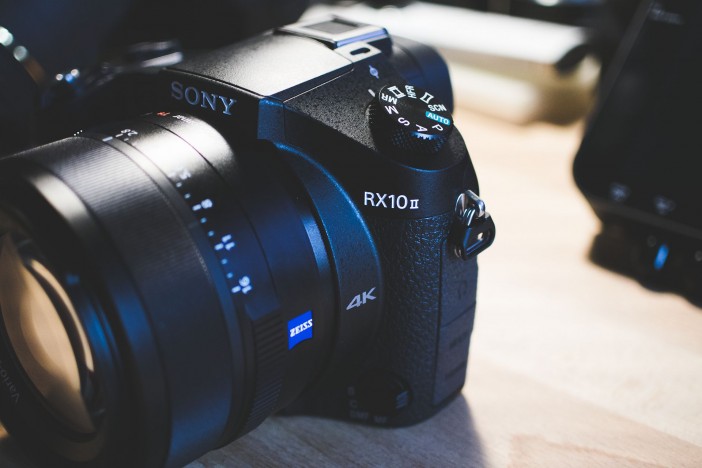 It features an extraordinary 24-200mm Zeiss lens with constant F2.8 aperture and built in ND filter.

Is this the run & gun camera you’ve been waiting for?

Ethics statement: went into a shop. Bought one. Used my own money. How remarkable!

Sony’s three musketeers of 2015 are here. I’ve been watching the RX100 M4 reviews with interest but I’ve decided the RX10 M2 is the one for me. I’ll get into the ins and outs of that in just a moment.

The 4K S-LOG of this camera appears to very closely match the dynamic range of the Sony A7S in S-LOG and it grades almost identically.

This makes the RX10 M2 a very attractive B-camera for A7S owners with outstanding dynamic range, yet with the benefits of a built in ND filter, internal 4K and a very long 10x Zeiss zoom. The base ISO is 800 in S-LOG mode rather than 3200 on the A7S.

The 2nd positive surprise comes from the 1080/120fps* mode. The image quality of this 120fps is outstanding and matches the 1080/24p output of the A7S. The best yet from any consumer camera.

This 120fps is recorded at 120fps (at a bitrate of 100Mbit/s, so double the 50Mbit/s of the A7S). There’s no buffering or waiting around for it to finish writing to the card and it is continuous. By comparison the 240fps+ in High Frame Rate (HFR) mode only records for 2 seconds with the quality-priority setting. 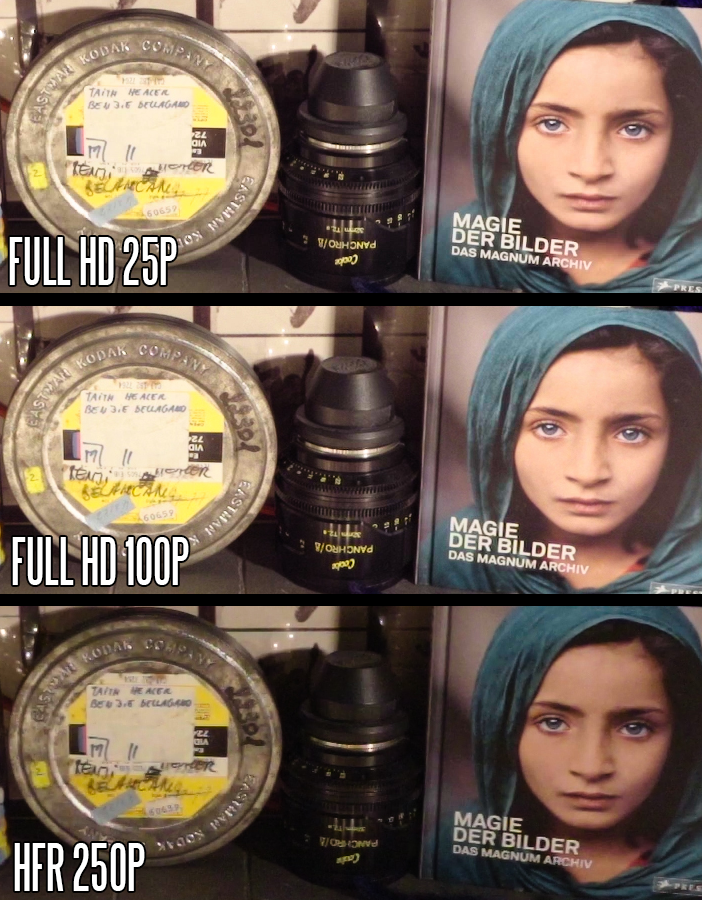 For most people’s slow-mo needs 120fps will look absolutely amazing.

I’m so glad it is free of moire and so crisply detailed just like 24p.

The 240fps image is also very good but a step down from the 120p. It is a slightly lower resolution upscaled back to 1080p and also pixel binned on the sensor, while the 120fps comes from a full pixel readout and is true 1080p. 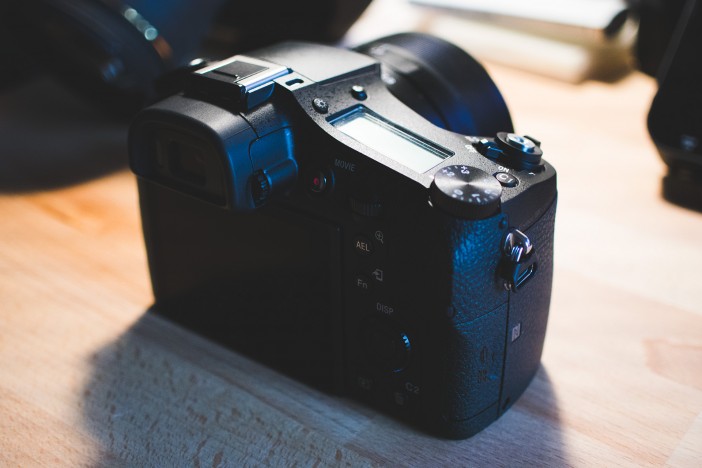 Think about that for a moment – this sensor is doing a full 17MP 16:9 pixel readout at 120fps!! What Sony have done here is to completely overhaul the plumbing, taking the pipes from the side of the chip and putting them under the sensor. This is what the Exmor “S” implies. “Stacked” A/D converters and an ultra fast DRAM buffer for the insane frame rates. With tens of thousands of converters working simultaneously rather than a queue of pixels from one line going into one converter per row, the sensor readout is much faster now. It is a technological quantum leap over Canon’s CMOS sensors.

The 480fps and 960fps (500/1000 in PAL mode) I am saving for the main review. These won’t deliver much in the way of image quality but creatively they’re spellbinding.

So far I’ve only tested the camera on my test scene, so no footage to bring you yet. I will be shooting with it tomorrow in the glorious sunlight of Berlin (provided it stops raining!)

* The camera is region switchable and I am shooting 100fps rather than 120fps that is available in NTSC mode. 100fps plays better with practical light sources in Europe.

Not global shutter, but close

Another advantage of the new stacked sensor architecture is that the horrible skew from a rolling shutter is vastly reduced as the sensor readout is completed much faster.

The RX10 M2 appears to have the least rolling shutter skew I have ever seen from a consumer stills camera and even some pro video cameras.

The ‘anti-distortion’ technology as Sony calls it definitely works. 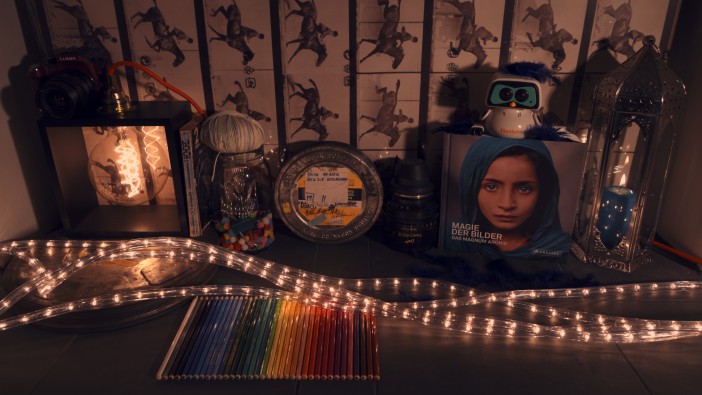 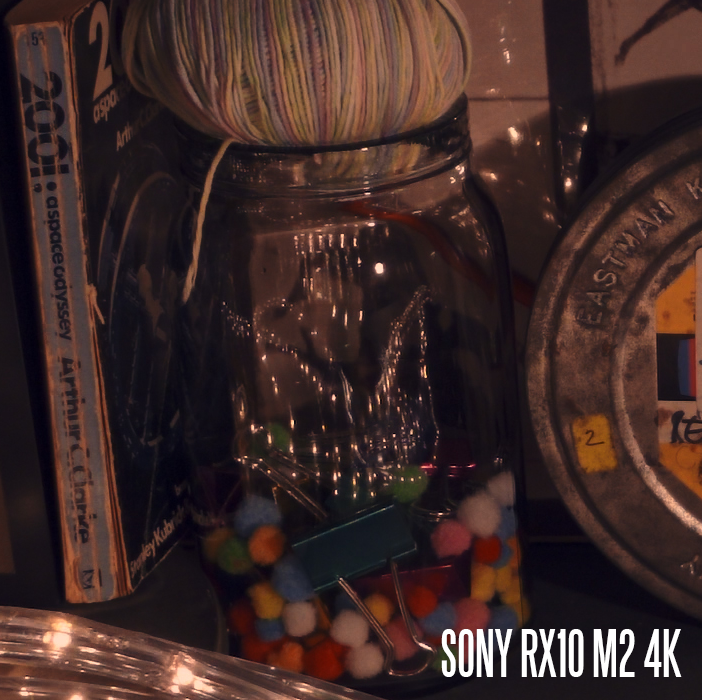 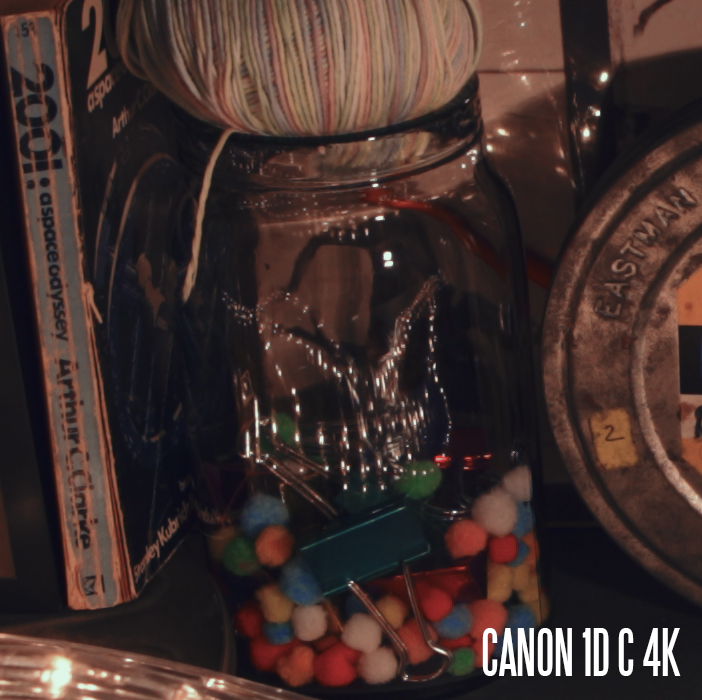 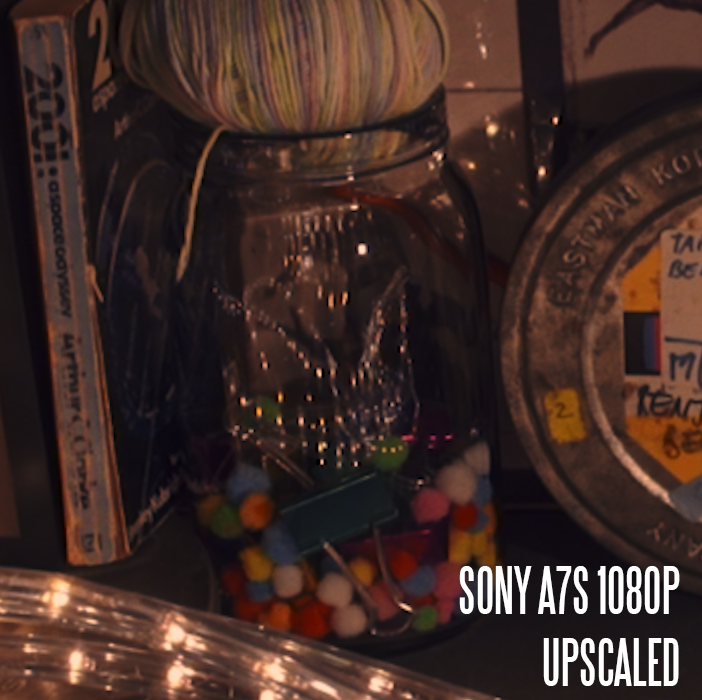 As you can see the resolution advantage of 4K over the 1080p of the A7S is clear and the RX10 M2 is also sharper than the 1D C out of the box, though applying an sharpening filter in post to the 1D C or playing with the PP7 ‘detail’ setting on the RX10 M2 would equalise them.

All three shots were graded using my own EOSHD LUT designed for the A7S.

Colour varies dramatically across cameras at the moment and S-LOG 2 remains a tricky grade if you want to match it to others. I’ve tried a lot of cameras and have some subjective opinions here…

The Digital Bolex has the best looking ‘analogue’ colour, which is closest to film. It uses an ex-Kodak CCD sensor, which helps explain why. The Samsung NX1 delivers for me some of the nicest ‘out of the box’ Rec.709 colour without a LOG mode & without a grade. Beautifully rich yet natural saturation from that new BSI Samsung CMOS and very very clean without any muddiness. The GH4 by comparison is a bit muddier, a bit noisier even at ISO 200 and much noisier at ISO 800 which desaturates the image, although dynamic range is a bit better. The Canon 1D C is utterly stunning in terms of colour and the codec samples at 4:2:2. Very low compression so very little is lost, but massive file sizes. Next best thing to raw for colour and skin, although it does occasionally go to banding hell. Now the Sony A7S is a funny one. S-LOG 2 is trickier to grade than Canon LOG and sometimes colour can feel a bit weird, not quite as natural, or not quite as I remembered the subject. Certainly a lot is down to how you grade it but there’s something else going on because the Rec.709 profiles (Standard, Portrait, etc.) don’t deliver as nice a colour as the NX1 does on “Standard”. It will be interesting to see if the RX10 M2 has improved matters here but my initial feeling is that colour is similar to the A7S and handles very similarly in the grade with S-LOG 2, certainly nothing to be ashamed about. It makes me really appreciate the Canon 1D C in a BIG WAY though – for the unbelievably deep and accurate saturation it delivers (albeit with some occasional banding). The Nikon D750 with the new Flat picture profile also deserves an honourable mention here.

I now have a rather lovely Convergent Design Odyssey 7Q+ and will be putting the cameras through that to see how the image improves via HDMI. The A7S stands to gain 4K this way of course and the NX1 stands to gain an edit-ready workflow without the need to transcode. The other advantage is much higher codec bitrates. 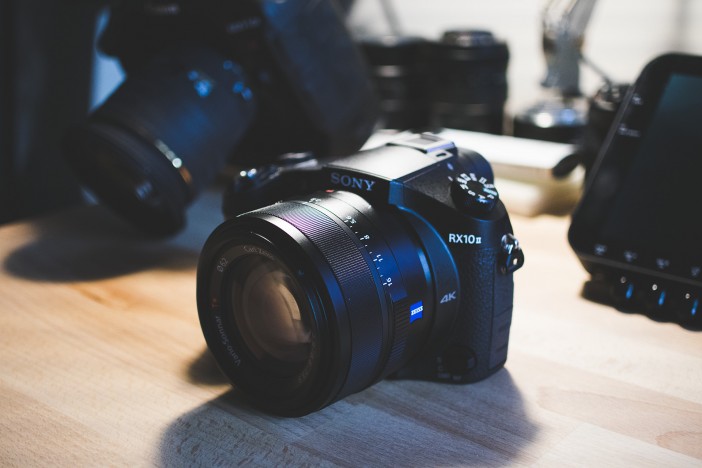 The RX10 M2’s nearest competitor is the Canon XC10 but that costs double, with media that is 5x more expensive and runs out 3x quicker in 4K due to the heavy 300Mbit/s codec. That camera lacks an EVF and the lens lacks a constant aperture. It slows to F5.6 on the long end and goes only 40mm further than the 200mm of the RX10 M2. This lack of competition serves to make the RX10 M2 pretty unique as a hybrid stills / 4K camcorder.

The RX100 M4 is undoubtably most people’s wet dream when it comes to a pocket camera but I don’t know about you – that Zeiss 24-200mm F2.8 really appeals to me. What constant aperture zooms with that range can you get for any other 4K camera?

I also like the idea of shooting slow-mo with this lens – crash scenes, explosions and pyrotechnics look great at 250fps+ and with that 24-200mm you will be able to get the shot without dying! 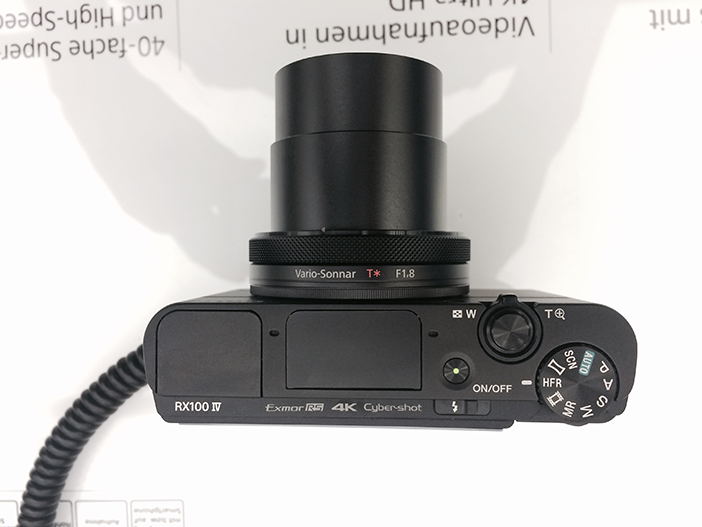 The RX100 M4 is extraordinary for packing 4K into your jeans pocket but it can only shoot that for 5 minutes continuously before it has to stop and have a cup of tea.

For shooting music videos or live performances longer than 5 minutes that probably isn’t going to be very relaxing.

The RX10 M2 is more expensive than the RX100 M4, naturally – but not extortionately so, when you consider the price difference between the premium Canon 1″ compact (G7 X, no 4K) and the XC10 is a rather crazy $1850.

Now you may wonder – why not just buy a zoom lens for the Samsung NX1 or GH4? Well not withstanding the fact this would be far more expensive than $1298 there are no 24-200mm F2.8 zooms by Samsung or Panasonic anyway! Furthermore both of those cameras lack the super slow-mo 250fps+ frame rates of the RX10 M2 and any kind of LOG mode (so far). I can’t sing the praises of a LOG profile enough. It gives you a raw-like grading experience and much better dynamic range.

I will of course go into this deeper in the full review.

The camera has a 4K HDMI output (with timecode) and the RX10 M2 is compatible with the Sony XLR adapter. It has a headphone and mic socket and the card goes through a door at the side, not into the battery compartment. The battery is the same as the A7S and it charges via USB inside the camera, which I have come to find a convenient feature. I have a separate charger unit as well so I’m not losing anything from having a USB charging camera – but the RX10 M2 doesn’t come with one like back in the NEX days. boo!

The EVF resolution has been improved, certainly looks closer to the A7S now, and the aperture ring can be set to clicked or stepless. The movie record button can finally be assigned to a custom button, one of which is right next to the main shutter release button. There’s peaking, zebra, timecode and no weird crops or lags when shooting in 4K or 120fps. As a stills camera it’s also nice, with 20MP raw files. The $2500 Canon XC10 lacks raw altogether. The mechanical leaf shutter is almost silent. The electronic shutter option is completely silent. Most cameras don’t give you that choice. 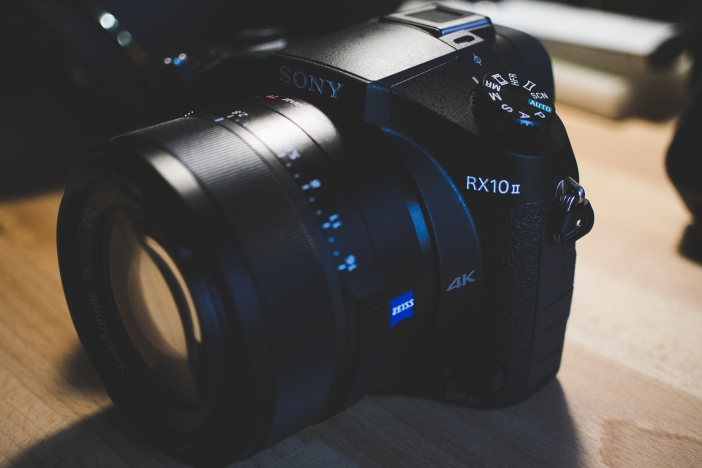 Pleasingly, I’ve had no moans from the camera menus about rebuilding the SD card database like on other Sony cameras. Looks like they have made this feature instant and shifted it back stage.

HOWEVER to make use of the 100Mbit/s bit rate modes in 1080p and 4K you must insert a card that is not just SDXC (64GB+) but UHS-I U3 not U1. That will exclude some of your older Sandisk Extreme Pro 95MB/s SDXCs. Luckily I had a Transcend 64GB UHS 3 card (90Mb/s read, 60Mb/s write). Thankfully these cards are not expensive and are actually pretty common now… 30 euros for the Transcend. By the way, its 300 euros for a CFast 2.0 in the Canon XC10.

One of the main reasons I have chosen the much larger RX10 M2 over the RX100 M4 are the ergonomics. I find the pocket camera just too small. The LX100 handles more nicely for a compact. The RX100 M4 feels cramped. The RX10 M2 has chunky grip, massive manual focus ring and mechanical aperture ring. For sure the RX100 M4 innovates for a pocket camera with its pop-up EVF, it’s just not as nice a video-camera. On a tripod the RX10 M2 feels much more at home (similar size to a GH4). 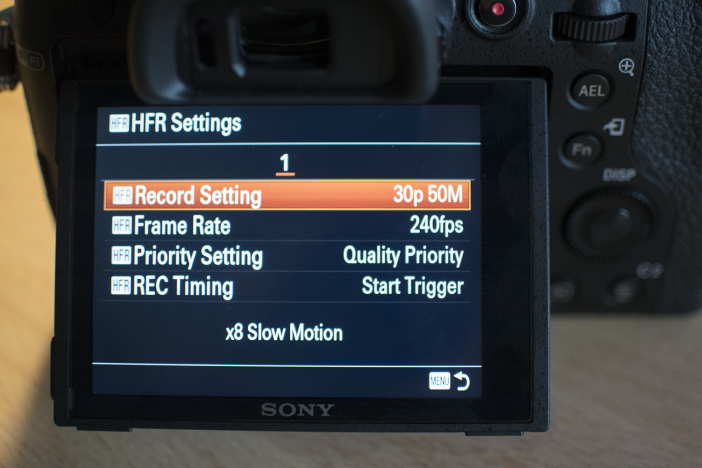 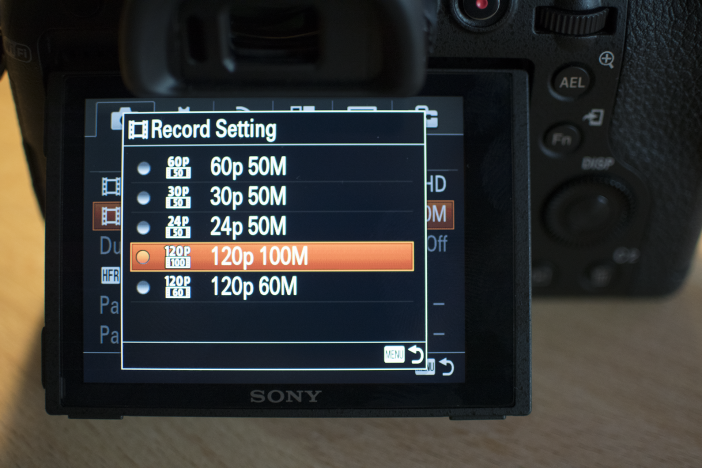 The creative implications of this camera are insanely exciting and I’ll we exploring this in my final review and bringing you my real-world footage.

Lets summarise for now. Internal 4K at 100Mbit/s, crisp moire-free 1080/120fps (also 100Mbit/s!) S-LOG 2 and dynamic range like the A7S, practically no rolling shutter, Zeiss 24-200mm F2.8 lens with optical stabiliser and built in ND filter, 240,480,even 1000fps “HFR” burst-modes and it isn’t even too shabby in low light either thanks to the new BSI CMOS sensor (although the super high shutter speeds required by the HFR modes make them ill suited to dim conditions, so far I find 4K with a 180 degree shutter perfectly usable at ISO 1600).

That is quite a lot for $1298 and I’m not even scratching the surface.

In one word – stunning.