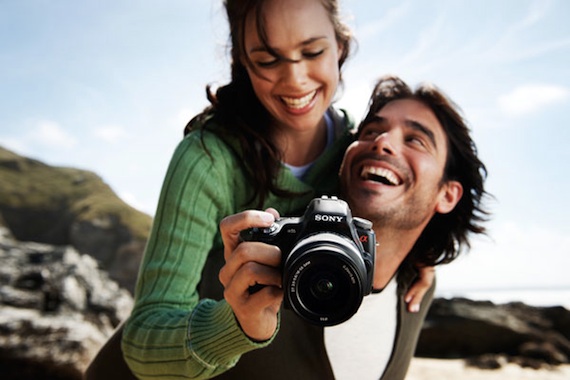 EOSHD.com ran an article this week which pulled up the new Sony A55 as just not good enough for the average indie filmmaker. The article is linked to on an earlier A55 feature on EOSHD.com, which is coming up 2nd in the Google rankings for ‘Sony A55’. Today, Sony went on the defensive.

It is 100% true that the Panasonic GH1 and Canon 5D Mark II are better options, and that the 550D and 7D wipe the floor with the Sony A55 in terms of creative control. When I mentioned the caveats on DPReview.com’s forum, the thread reached the maximum capacity of 150 messages in just 6 hours. Many people didn’t understand it from a video DSLR perspective but the overwhelming negativity did it’s trick, and the negative publicity was a PR misfire for Sony on launch day.

In a message on DPReview.com today titled by Sony ‘The A55 is the best DSLR for budding filmmakers’, a marketing copywriter set out an impassioned defence of the A55 but hit all the wrong buttons and ignored all the relevant criticisms of the camera.

I recently read some posts from people who claim the A55 is not for aspiring artists because it lacks manual controls. This is completely untrue. The A55 is the best thing that has happened to the Indie filmmaker. Now, the potential for professional looking movies is greater than ever.

1) With SteadyShot™ and phase detect AF, you can now do handheld shooting, which is far more practical for an Indie filmmaker than using expensive tripods and rails.

2) With phase detect AF, you can now shoot moving subjects and action sequences. With other DSLRs, it’s very difficult to manual focus a moving target. I.e. try shooting a live sporting event or a concert where the subjects don’t stand still.

3) You can still do focus shifts in movie mode if you select local AF.

4) You can still do manual focus and aperture changes

5) If you want to change aperture during movie mode, use an m42 lens which has aperture control on lens.

I guarantee you if you take two equally talented filmmakers and give one an A55 and the other a Canon 5D Mark II, the A55 filmmaker will make a better movie hands down because his movie will be more dynamic with action and subjects that move back and forth with the camera.

Whilst I do agree that good AF and good stabliser is a nice thing to have for video, still the most glaring omissions are overlooked completely by Sony.

An impassioned response then followed from readers of DPReview.com, and not just on the subject of manual controls.

I guarantee you that if you take two equally talented filmmakers they will both choose the 5D Mark II because it has 24p.

The codec and bit rate on Canons are far more advanced than Sony’s offering – not to mention framerate selection as well.

The codec issue is only relevant if you shoot for the theater. If you’re a budding filmmaker, you’re shooting for Vimeo. 30p is better for the web. 24p is old tech from the film days. There’s no reason why 24p is better than 30p, just the opposite. Now, if your video is so good that it warrants showing at the theater, I’m sure Hollywood would gladly pay for the conversion process from 30p to 24p.

Ooops! I guarantee you 30p into 24p does not go. It seems Sony’s marketing staff are as clueless as their consumer imaging device product planners. He continued…

Once the A55 is released, you will see much higher quality films on Vimeo, with complicated action sequences and handheld camera work. Most of the DSLR videos nowadays consist of mainly focus changes to show how cool their bokeh is. The subjects are flat and stationary, afraid to move out of focus. Movies are about content. Sticking a camera on a tripod and showing bokeh doesn’t qualify as exciting filmmaking. The A55 will allow filmmakers more creative freedom.

The post has all the classic hallmarks of a marketing department communication. The user is named ‘sAlphaShooter’ and his IP address is also a give-away.

Of course Sony’s points are relevant in their own ways – I loved the AF tracking for handheld and steadycam work on the Panasonic GH1 last year. AF tracking is useful for handheld and action shots whist maintaining a shallow depth of field, but there is still no excuse for crippling the indie filmmaker’s ability to shoot any other kind of scene.

The Sony A55 is also not intelligent enough in auto mode to select the shutter speed correctly either. For action a fast shutter speed (which in auto-mode, is always high to regulate exposure without ND filters or reducing shallow depth of field) gives a kinetic energy to a shot, but you do not want this aesthetic for much else.

I believe genuine thought processes have gone on at Sony about who to aim the camera at and what kind of movies people want to shoot. Unfortunately, their entire movie mode strategy has seemingly not been decided by an experienced DP, rather a hack who shoots hyperactive sports videos and nothing else. Sony have been playing too many Playstation games.

By not giving their customers the choice between full-auto and creative manual controls, Sony come across as arrogant, condescending and with little understanding of the aesthetics of cinema.

The Sony A55 is the lycra clad FreeRunner of the DSLR video world.

You can read the full thread here at DPReview.com