Adam Wilt over at ProVideoCoalition has done the first really comprehensive look at the Sony FS700’s image quality with a lab test. So far we’ve had field reports but nothing that goes into depth about image quality. How does it perform?

First let me say I am deeply impressed with how far my FS100 digs into the shadows despite having an AVCHD codec at the standard 24mbit. There’s no nasty macro blocking and noise in the lows and you can pull up plenty of dark tones if you need to, without wreaking the image. Given the right picture profile and armed with the knowledge that it is best to transcode AVCHD to ProRes with 5DToRGB (to avoid the Mac Quicktime AVCHD clipping bug) the FS100 can manage a very “film like” image.

Has the FS700 managed to improve on an already good thing?

Although the FS700 does not have S-LOG like the F3 (Sony LOG) it does feature new Cine Gamma picture profiles. Lacking S-LOG does not mean you can’t have a flat profile – you can still use custom LOG profiles like the FS100 such as G-Log by Frank Glencairn.

Bluntly, the FS700 is off the chart for dynamic range. Adam Wilt first tested the camera with a 13.3 stop dynamic range chart but not a single stop clipped to black.

That is more than the forthcoming Blackmagic Cinema Camera in raw and very close to the Hollywood gold standard of 35mm film which is approximately 15 stops.

Although highlights blow more easily (and less gradually) than film which has a lot of latitude, you can feel comfortable under exposing on the FS700 to protect the highlights, safe in the knowledge you can dig 13-14 stops into the shadows and bring them up cleanly, without a load of compression and noise. 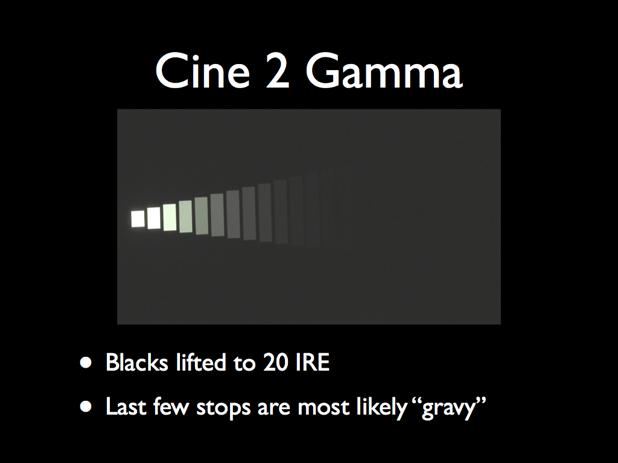 The bad news is that there’s still some false colour on the edges of sharply defined highlights according to Adam. In this respect it seems similar to the FS100 and it is a shame they have not fixed that because it is pretty much the only artefact left. That said, the Canon C300 also has a similar issue. I’ve seen it occur less regularly than in my FS100 footage but I have seen it around very bright highlights in under exposed footage. Specifically – a candle in a church and sun light glinting off the sea in a heavily underexposed shot. From Adam:

Sharp transitions between normal exposure and overexposure – edges of blown-out windows, sharply-defined specular highlights, and the like – show jagged, oversharpened edges and spurious chroma artifacts. I’m guessing that when a cluster of photosites is sampled and processed to generate an image pixel, having some but not all of the photosites in the cluster driven to their clipping values may be fooling the color-reconstruction algorithm used, just as channel-specific clipping in the highlights (on any camera) can cause a hue shift in the affected area.

In terms of resolution the FS700 measures similarly to the FS100 despite having an oversampling 4K sensor. But this is not really a problem, since the FS100 ranks very highly when it comes to resolving a nice 1080p image with plenty of fine detail. From the review:

The FS700 is very close to the FS100 on the charts, capturing 800 TVl/ph horizontally and 1000+ lines vertically…There’s some slight horizontal luma aliasing, and muted vertical chroma aliasing. It’s clear that the camera’s internal demosaicing isn’t getting quite as much out of the 4K-ready sensor as theory says it should; it’s not bad, but it’s not as crisp and detailed as one might hope. In real-world shooting, though, the slight resolution shortfall isn’t an issue; FS700 pix look very rich and detailed.

Even so, if and when the 4K compressed raw output becomes available, it’ll be interesting to see what additional quality can be wrung out of this sensor.

Clearly Sony have done a superb job on the latest implementation of AVCHD in the FS700.

To be honest if the FS700 can do 14 stops in AVCHD why do we need raw at all? Is raw overrated? Is it time to embrace sophisticated compression rather than seek out raw cameras like the Blackmagic Design Cinema Camera and Digital Bolex?

Head over to the ProVideoCoalition FS700 review and Art Adams FS700 dynamic range test for the complete info.