The Samsung NX1 and Sony A6300 have been warned. Fujifilm has arrived! No really. The X-T2 shoots the best 4K I have yet seen for $1500, with a great lens range, pleasing colour science, less rolling shutter and a different approach to ergonomics to Sony. 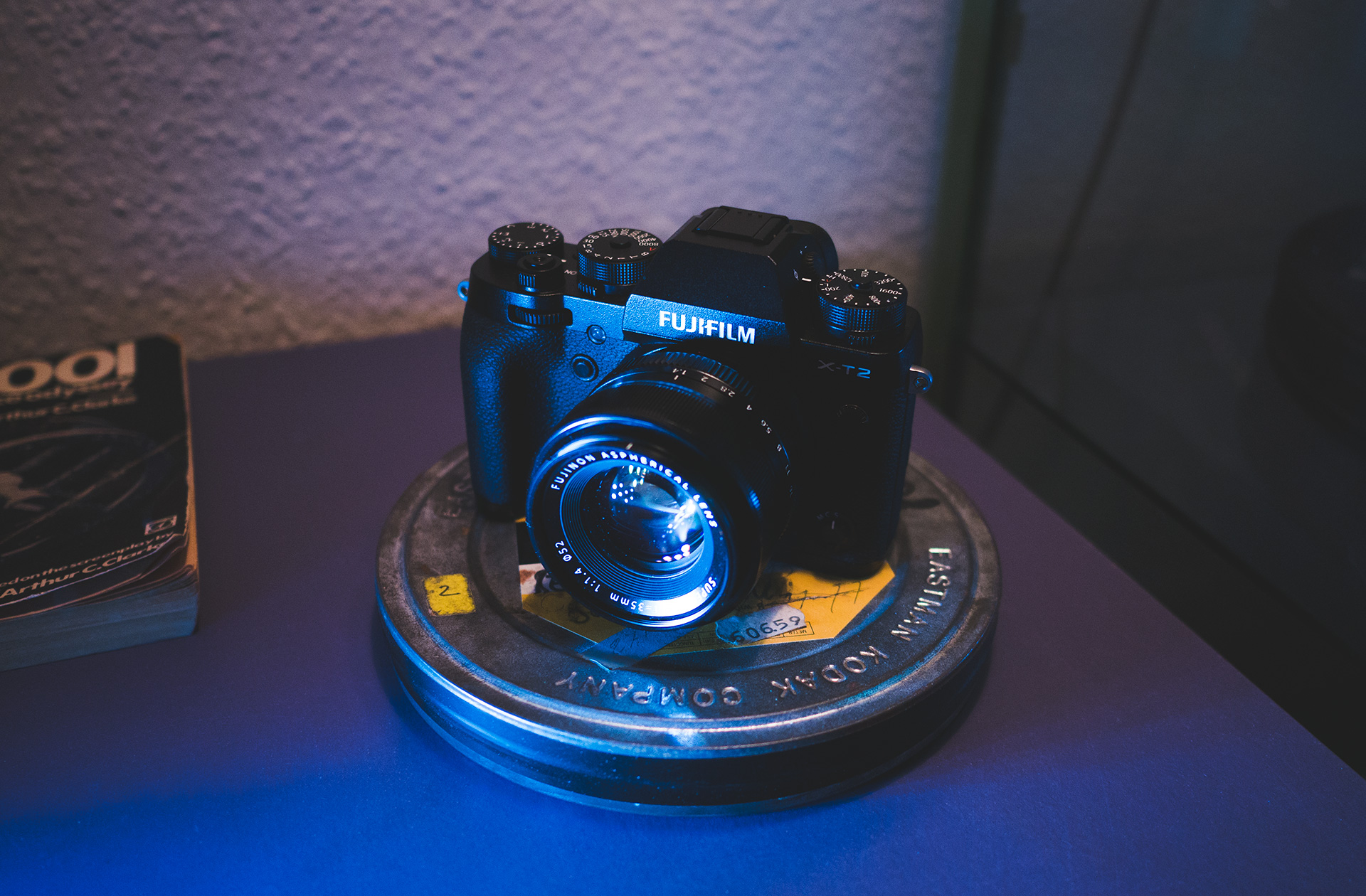 Recently I did some filming in Venice, Italy. I had with me my Canon 1D C, Canon 80D, Samsung NX1 and for the last couple of days, an X-T2. Venice is perhaps the most beautifully photogenic place in the world but also a bit tricky. You see, Venice is being ruined by the least photogenic mass tourist crowds imaginable and their daft selfie sticks.

The city is fantastic for observing people observing themselves but if I could wind back the clock to the 1960’s I would. The place hasn’t changed but the audience has. Every person and every action in the shots seem homogenous and mainstream. There’s little eccentricity. There are fewer and fewer real locals or real dramas playing out on the streets any more. Family life on the streets feels like it is dwindling. Restaurants and shops dominate every sight. 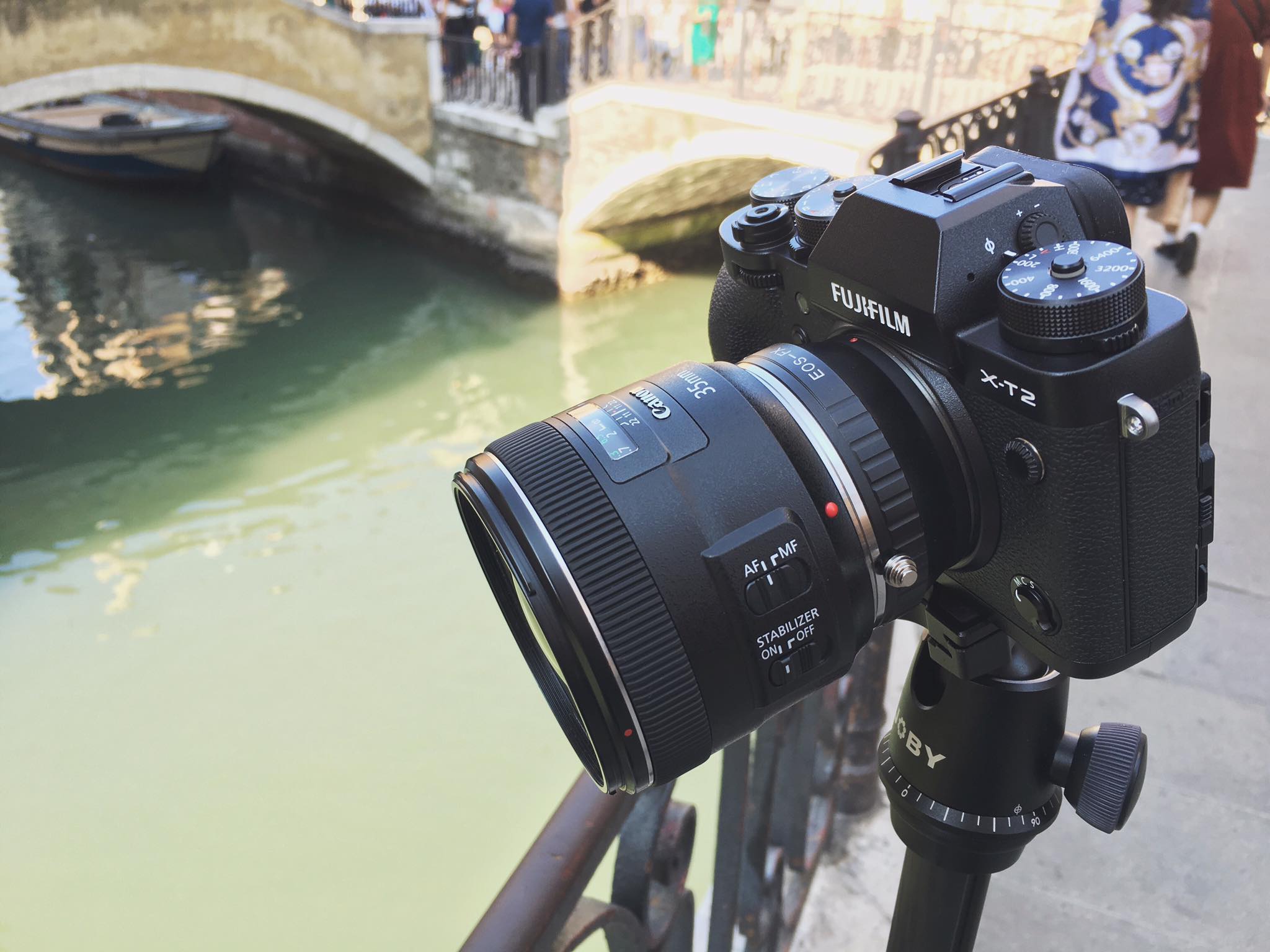 The up-side is that Venice is mercifully free of cars. A lagoon of islands with only canals, the lack of noisy traffic makes a huge difference to the ambience of the city, it sounds wonderful and much quieter than it has any right to be given the number of visitors. More challenges for the camera though come in the form of the many narrow canals where everything is either basking in bright sunlight or hidden in dark shadow. As you can see from the video above, the X-T2 did quite an amazing job of dynamic range, if not quite up there with EOSHD C-LOG on the 1D C (the footage I am editing now) it beats the Samsung NX1 and I prefer the final results to the A6300’s graded S-LOG. They are easier to get to for a start.

Although garish clashing colours ripple through the streets and in front of your camera, thankfully the light and architecture in Venice is as spectacular as it ever was. Initially I had only planned to shoot with my 1D C and try the 80D in Venice. Then I arrived at an absolute gem of a camera store – the shop window of photographer Marco Missiaja. Here I found a Fuji X-T2 just days after release for a very good price so I snapped it up. I already liked the X Pro 2 in my review but the X-T2 brings 4K and an articulated screen to the table.

So let’s do a quick round-up of the consumer 4K cameras. We now have the following to choose from (although you might have to search a bit for the Samsung!) –

How about the Canon 5D Mark IV? Remember the 1.74x crop in 4K on the 5D Mark IV is NOT improvable upon with Speed Booster so you’re stuck with shooting through a heavy crop of the lens. The resulting image misses all the lovely rendering towards the edges and results in a big change in field of view with full frame lenses.

For the video above I used the Canon 50mm F1.2L as I didn’t have my Nikon mount to Fujifilm Speed Booster with me, so was doing the same thing with the X-T2 which magnified some of the flaws of the lens wide open and cropped out the nice edges – however the point is you’re not forced to. Also, Fuji’s lenses are designed for 1.5x crop so the field of view change isn’t as problematic as it is on a Canon 24-70mm on the 5D Mark IV.

The X-T2 4K can go to 1.3x crop with the Metabones Speed Booster – much more like the 1D X Mark II. More on that in a moment. 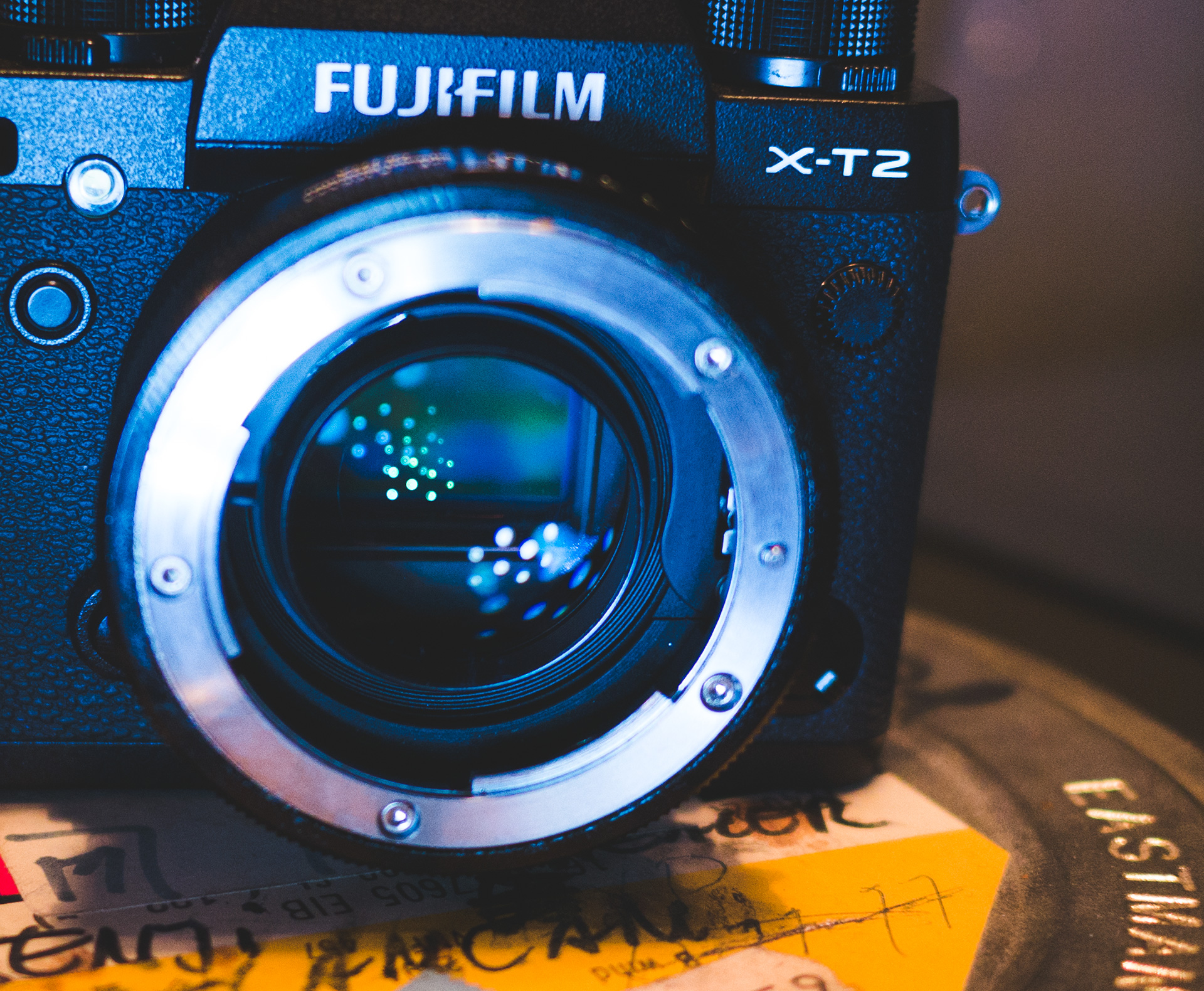 Low light performance in 4K is also better than the 5D Mark IV.

I think for the prices the new 5D is selling at, I’d rather break the bank all the way and use the incredible 1D X Mark II. The 5D Mark IV might become interesting once Magic Lantern port more of their features to the new camera such as RAW video. I’d rather have full frame 2K RAW than heavily cropped 4K.

In Venice I also had my NX1 with me for some 120fps shots. Fujifilm are famed for their ergonomics and I hadn’t expected to compare the shooting experience to the Samsung NX1. Funnily enough I prefer the NX1!!

No really. With the retro dials and traditional approach of Fuji it can work for and against you. I still think the NX1 has something special ergonomically. It just works. It’s like a mirrorless Canon 7D. It’s the least fiddly for physical controls and menus of any camera out there and one of the most comfortable body shapes to hold if you have large hands. 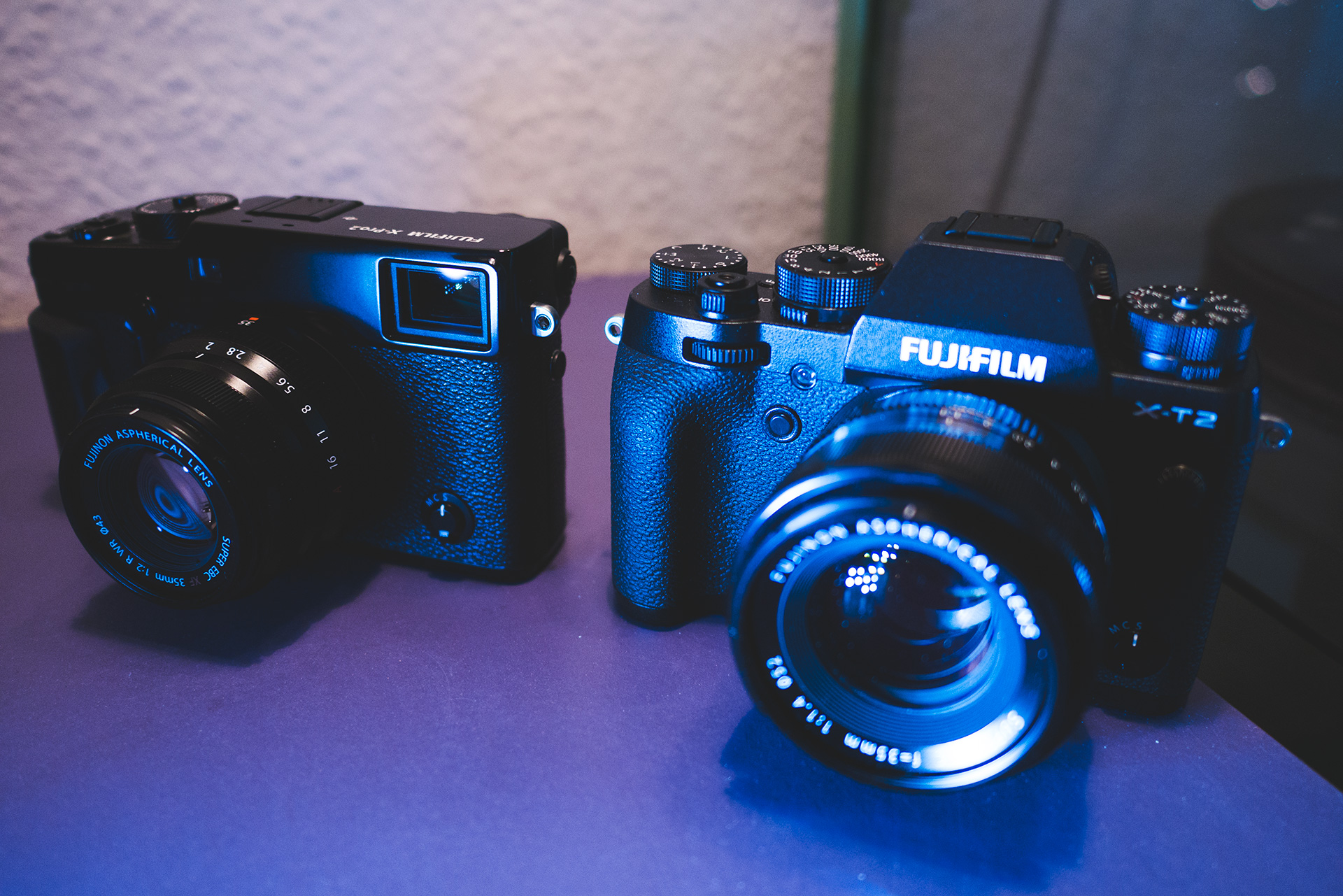 The X-T2 is more fiddly and cramped. It doesn’t have the charm of the X-Pro 2 or the looks. It feels less playful and more work-like. If the X-Pro 2 had 4K and an articulated screen I wouldn’t have bought the X-T2. I even prefer the feel (and looks) of the much older X-T1 Chrome edition. There’s nothing particularly bad about the X-T2 ergonomically, it just doesn’t feel as inspired or as responsive as it should do.

… is something else. Equally unthinkable as it is for Samsung to beat Fuji on ergonomics, Fuji have beaten Sony on video quality with this camera.

The X-T2 delivers THE best 4K image overall. Better colour response than the Sony A6300 and A6500 and way less rolling shutter.

The Metabones Speed Booster for X-mount turns the X-T2 into a 1.3x crop similar to the 1D X Mark II and 1D C – but ONLY with Nikon lenses, NO autofocus and NO VR. What few Fuji lenses do have stabilisation though like the 18-55mm F2.8-4 kit zoom work very well, almost like having 5 axis stabilisation in fact. AF works very well for stills but isn’t mega for video like it is on the Canon 80D. I’d take the X-T2 over the 80D for video any day because of the beautiful 4K, better APS-C lenses and Speed Booster compatibility.

Whereas the A6300 remains the cheapest way to get near-full frame 1.1x crop from your Canon lenses on a 4K camera, the X-T2 at 1.3x crop with Nikon lenses has the edge for me. The upsides compensate for that lack of EF lens mount compatibility and slightly more of a crop. Unfortunately all my best lenses are full frame Canon EF mount, so better to make sure you have some good Nikon FX glass if you’re going with the X-T2 and Speed Booster.

Compared to the Samsung NX1, the X-T2 has the edge for dynamic range and less rolling shutter. Although they both lack LOG in-camera you can dial them both quite flat and even convert the footage to LOG ProRes in post which grades beautifully with LUTs designed for real LOG. I’m developing a LOG converter for the X-T2 and it should be out next week.

Real LOG in-camera is something the A6300 and A6500’s do have over the X-T2 – indeed that and the Canon EF mount compatibility and better video AF will be a consideration for some buyers. Fujifilm’s F-LOG is only available via HDMI. This is stupid. I think the reasoning behind this is that people who tend to use HDMI recorders are professional shooters and Fuji did not want a lot of badly graded F-LOG footage out there ruining their reputation for colour, especially not on the X-T2. Of course Fuji should reconsider and not cripple the camera vs the competition. Firmware update?

The trick for maxing out dynamic range on the X-T2 is to slightly under-expose and set both highlight tone and shadow tone to -2 in-camera along with sharpness to -4.

The codec holds up very well indeed and there’s plenty of information in the shadows.

The original X-T1 had the worst video quality around. The X-T2 has the best overall on any APS-C camera. That’s quite a turn around isn’t it…

Compared to the Sony A6300 the new Fuji has better colour and less rolling shutter in 4K, as well as better quality 1080p. Ergonomically it isn’t the best on the market but it is a lot better than the A6300.

The Samsung NX1 is also beaten in some aspects by the X-T2… but not in all respects. The X-T2 is significantly better at ISO 1600 and above. It holds onto more dynamic range as well although the difference isn’t huge. Again rolling shutter is less on the X-T2 than the NX1. On the side of the NX1 it is cheaper as it is discontinued, you get very satisfying colour performance out of it, incredible detail levels in 4K from that 6K readout, no overheating issues and very long 4K run times in H.265 with minimal file sizes. If you’re doing interviews or live event filming the NX1 is the better choice over both the X-T2 and Sony A6300. For slow-mo it is better as well, featuring 1080/120fps without a sensor crop. The NX1 also has a higher bitrate codec with the latest NX Hack at 160Mbit/s – effectively double that as it runs H.265. In the real world though I’m not convinced the shadows stand-up as well on the NX1 when grading compared to the codec on the X-T2.

I still don’t think we’re at the perfect climax on the set of the Fuji porno yet though. For a start the X-Pro 2 has more X appeal, a nicer design and more innovative viewfinder concept. I wish this model had 4K and an articulated screen but Fuji made the bet that one audience wouldn’t want it and the other audience would. Hmm. Fuji seem to have divided their customers into two camps with the X-T2 and X Pro 2 and I am not sure it makes much sense. If I were Fuji I would try and combine the best of both cameras into one body, then release it with two sensors – one for high resolution and one for low light.