The Canon C300 (currently reduced to $11,500) was the $15,000 stalwart of the professional videographer, only recently did it have a compelling rival – the Sony FS7.

The Samsung NX1 is essentially a cutting edge 4K Super 35mm sensor in a mirrorless camera, recently given a video oriented firmware update which improves dynamic range and the available image profiles.

I was curious to see how the images from these cameras compared and I put my Canon 1D C into the mix as well. 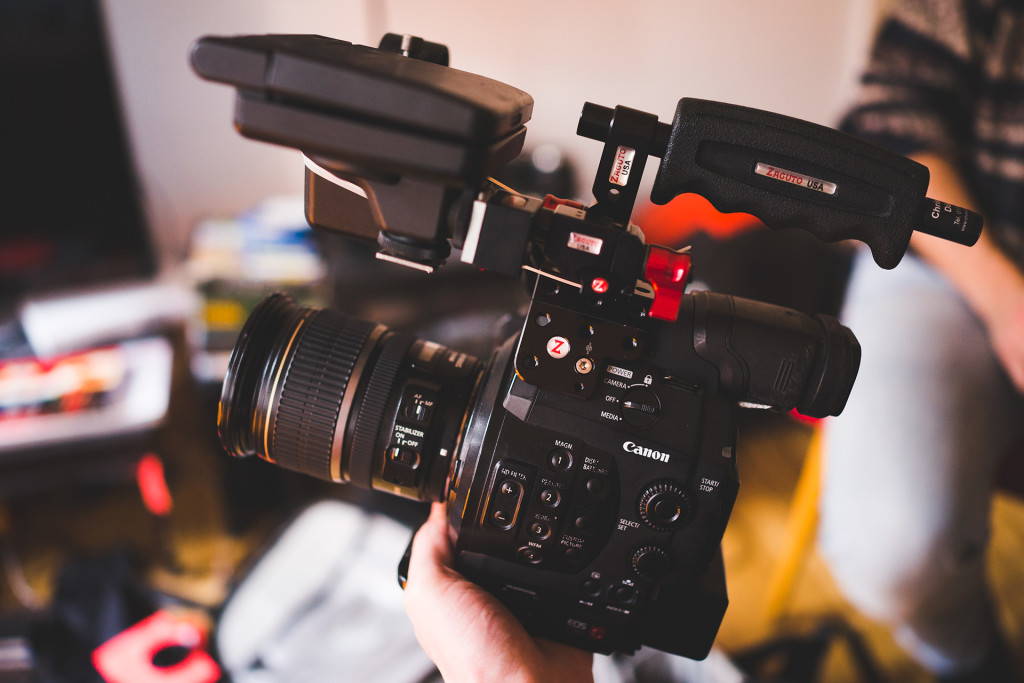 The Samsung NX1 is the only Super 35mm size 4K sensor I am 100% happy to put my Cooke S4i Minis on. The GH4 takes them but it isn’t Super 35. The A7S of course takes them but it’s not 4K in Super 35 mode and these aren’t full frame lenses. The NX1 gives a truly astounding image with the Cookes and truly brilliant Ciecio7 NX -> PL adapter, below… 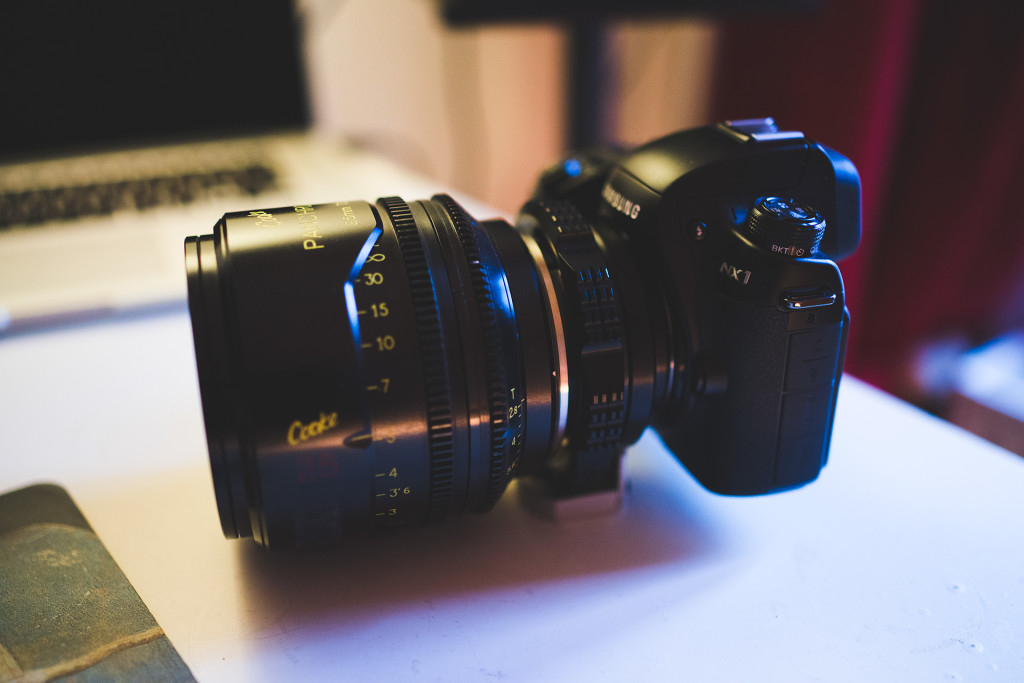 For the test I wanted a more level playing field between the C300 and NX1, so I shot it with the Samsung 30mm F2.0 pancake stopped down to F4. It’s actually a pretty good lens and clearly as you will see from the test shots vs the C300 there’s less distortion in the NX1 shots vs the C300 and 1D C with my ZE mount Zeiss 28mm F2.0 Distagon. That’s a very good lens and I didn’t expect the Samsung pancake to be as flat as it is. Whether the distortion correction is digitally applied or not is moot – whatever correction the NX1 is doing there’s no trade off or artefacts apparent in the image.

Compared to the C300, the NX1 is surprisingly much cleaner at ISO 800 than the C300 at it’s native ISO 850. There’s less mosquito noise in the mids and zero fizzing noise in general.

The C300 is a renowned low light performer and indeed it holds onto a finer noise grain as the ISO rises. But it’s no match to the 1D C or Sony A7S over ISO 1600 or the NX under 1250. The NX1 produces the cleanest image under ISO 1250 I’ve ever seen for a Super 35mm 4K camera. It’s a shame it drops off a cliff somewhat at ISO 3200 but hardly unexpected given the resolution of a 6.5K sensor.

I was also able to get the NX1 very close to the C300’s Canon LOG for dynamic range, by tweaking the new Gamma DR and Master Black Level settings. If the C300 can do 12 stops the NX1 can do 11.5. In fact as you can see from the frames below (click to enlarge) the NX1 can go as flat and colour looks almost identical, like Samsung had Canon in mind when they calibrated the image processor. The C300 has a tiny bit more highlight headroom – but it’s less than half a stop. Switch to Rec.709 and the NX1 gives arguably the more pleasing, punchy tones out of the box.

As for resolution it’s a no-contest. Viewed on my 4K display the 1080p image from the C300 really showed its age with uninspiring levels of detail, filling just a quarter of the screen. Soon clients will be asking for 4K. They’re not at the moment but soon they will all be touting 5K iMacs and wondering why 1080p fills less than a quarter of it.

Even on YouTube detail is richer and more satisfying in 4K on the NX1 compared to the C300. The C300 is known for being a very crisp 1080p camera, but the NX1 looks better in 1080p too – once the 4K footage is downsampled in the edit.

At this point it would be reasonable to suggest a $11,500, formally $15,000 camera with a worse image than $1500 Samsung consumer camera would be entirely without utility. Actually that isn’t the case. The C300 does a lot of important stuff right – look at how brilliantly it fits into existing workflows and ways of shooting. The body is designed to aid simplicity and eliminate add-ons or workarounds. It isn’t perfect – I found some aspects of the handling somewhat overrated. The function key, menus, jog dials on the rear of the camera feel cheap. They’re not particularly nice to use. The screen feels dated and the EVF is terrible. However I love to have that articulated top mounted screen and top handle, with no external battery supply required for the screen. It just works and you don’t worry about anything. I love the grip on the front of the camera under the lens and the whole thing is far lighter than it has any right to be, given the class of camera. It’s not small like a stills camera but it’s far more practical to use in the field than a Red Epic or Arri Alexa. The built in ND filter is of course a major feature that the NX1 needs an add-on for. However there are pros and cons to a built in ND wheel. You can’t expose as precisely with it as you can a variable ND filter screwed onto the lens. The SDI and XLR jacks on the C300 round out a spec that made sense right from the start for pros who put workflow and practicality ahead of image quality. 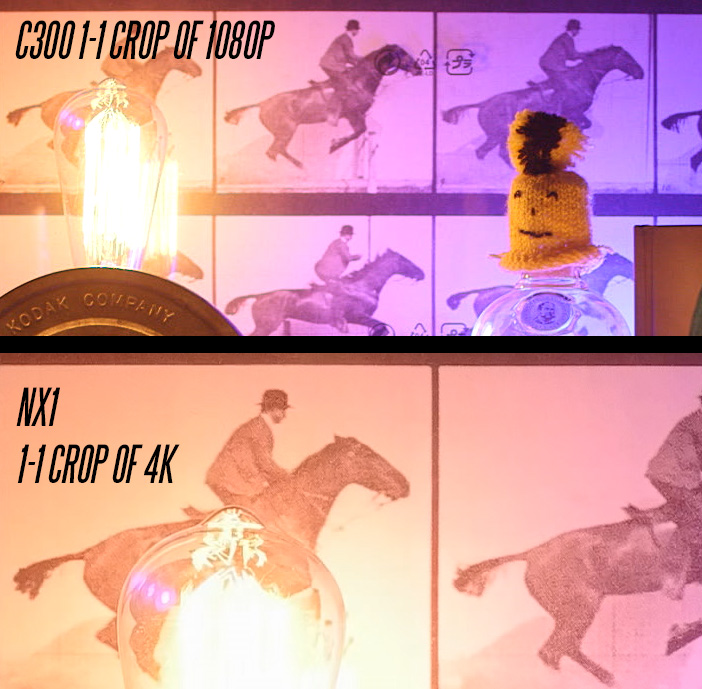 The Samsung NX1 in contrast requires a more convoluted workflow all the way from acquisition to post. I’m not saying it’s complicated. It’s just not as standardised. The codec isn’t widely supported of course, so you need to transcode it to an edit ready format. Indeed most transcoding apps don’t even support H.265 yet and hardware support is thin on the ground to say the least. Smartphones like the Samsung Note 4 and Note Edge have H.265 decoding / encoding support in hardware with the Qualcomm Snapdragon 805 processor. The Mac Pro does not! Demand for 4K is also thin on the ground amongst clients though in the next 12 months I can see this rapidly changing, leading to the obsolescence of any camera that can’t shoot it. On the acquisition side the NX1 is a mirrorless camera of course which actually has less trade-offs than you think for video. Before cameras like the GH4 the main reasons pros cited for their move from DSLR to C300 were moire, heavy rolling shutter, lack of built in viewfinder, too many workarounds, poor audio, toy-like build quality. Well rolling shutter is still relatively heavy but the other issues are vastly reduced on the NX1, GH4 and A7S mirrorless cameras.

The Canon 1D C in this test had an issue. With Canon LOG the blue channel clipped heavily with the blue light source in the frame. On the standard Canon picture profiles it was fine, but both the NX1 and 1D C rendered this blue light source with a heavier purple hue than the C300, which was closer to reality. Knowing the Sony A7S was giving me clipping problems with bright blue lights, I had a Philips Hue LED bulb in this scene. I bounced it off the vodka bottle glass for some variation in luminosity and to give me some bright blue specular highlights. The C300 handled this area the best followed by the NX1 close behind, with only a very slight clipping in the blue channel on that camera. The 1D C in Canon LOG simply went to hell and with C-LOG off, things were fine but a little washy and purple. If you have bright blue light sources or projections in your scene turn off Canon LOG on the 1D C.

The 1D C has a lot of virtues but it seems the extra dynamic range of C-LOG is not the entirely free lunch it is on the C300. This is disappointing considering the $12,000 launch price of the 1D C (now $7999). Whether this is a problem unique to certain kinds of artificial LED lighting remains to be seen but it’s the first time I’ve had it with the 1D C. Any other kind of blue is fine. Colour accuracy on the C300 does seem to be a strong point.

However at the back of my mind throughout my C300 experience, I couldn’t help imagining this…

It’s easy to see how the C300 became the success it did, but with the passing of the 1080p era so the passing of the C300 will come. It’s not a surprise to me that the NX1, aside from rolling shutter, essentially produces a better overall image whether your end delivery is 1080p or 4K. The difference between 420 and 422 colour sampling diminishes to practically nothing when the NX1 4K is scaled to match the 1080p of the 422 shooting C300. There’s no moire or aliasing, nor pixilation around bright red highlights. The new NX1 firmware update with GammaDR and other settings have done a lot to improve dynamic range and prevent the crushing of blacks I saw previously. The codec is truly the stuff of next generation, but the workflow feels distinctly more vintage! Therefore, the target audience is different to a C300. Most C300 users need a fast turnaround and broadcast ready shooting, the NX1 isn’t that. The A7S and GH4 are closer.

The NX1 has the advantage of being instantly adaptable to PL lenses, with the Ciecio7 NX -> PL adapter. With the C300 your choice of EF or PL is hardwired at the point of purchase. The flipside of course is that unlike for the GH4, there’s no smart EF adapter for the NX1, only passive. No image stabilisation or aperture control on Canon lenses! For my Cooke lenses though, the NX1 is a total bargain. What other camera can I shoot the native image circle of these Super 35mm cinema lenses with and truly exploit their resolving power in 4K for $1500!? The next step up is the FS7 and that is $8000!

While the Samsung NX1 is cutting edge and makes for the best Super 35mm sized sensor camera you can buy for the money, period, the C300 is on the way out. I wouldn’t be surprised to see it replaced in a few weeks at NAB (early April) 2015 though. In many respects – screen, viewfinder, lack of high frame rates, lack of 4K – it is looking incredibly dated now.

Right now Samsung NX1 owners can feel confident they are shooting with a better image at their disposal than most pros on their $12,000 cameras.