Note: This is an early-days test I did quickly before a shoot today. A larger one encompassing more cameras (GH3, D5200, 5D Mark III, Blackmagic Pocket Camera) and scenes will be on EOSHD during the coming week.

The Sony RX10 appears to play in the same ballpark as the Sony FS100. Is this the new budget king for semi-pro videographers?

First impression is that the Sony A7R really benefits from some post work and the Vivid picture profile looks best when used with Film Converts film emulsion emulation. You can set the A7R to Neutral and do a flat image, turn sharpness all the way down, but to be honest – what for? It doesn’t give me nicer results, somehow the desaturation is baked into the file. So vivid with sharpness on default seems to be the way to go. Unfortunately, you do get some stair stepping and jaggedness no matter what the sharpness setting is on, because of the line-skipping sensor output. 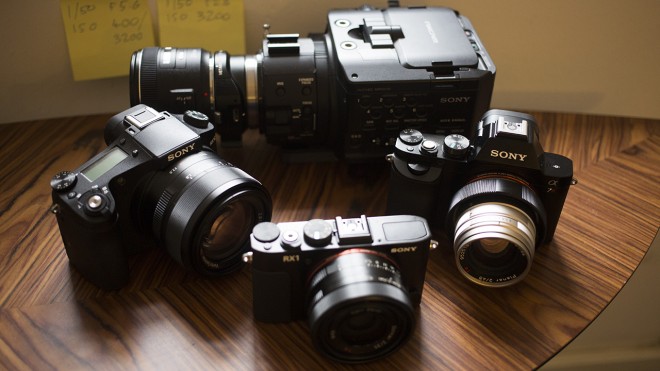 With this test scene the A7R looks nice. On a wide angle exterior shot set to infinity I think the gap between the A7R and RX10 would seem a lot larger.

The RX10 is really impressing me. Considering the sensor is stuffed full of megapixels (20MP) it has a very clean image. Obviously that full pixel readout is really helping.

I’ve tested the uncompressed HDMI output and really the AVCHD stands up pretty well to it. With DSLRs what matters is how much data the sensor outputs in video mode and how well the internal processor debayers the raw output before it gets sent to the HDMI port or the AVCHD encoder chip. In the end that AVCHD compression doesn’t noticeably degrade the image. It does smudge out some grain but the grain is never fine to begin with especially on the A7R. Would a better codec be worth it on the RX10? Only if it was a significant step up to 10bit ProRes 422 like on the Blackmagic Cinema Camera.

The RX10 handles beautifully. The lens just feels fantastic. Never used such a nice aperture ring before on a fixed lens camera. In stepless mode it’s smooth and ultra precice.

That and the built in ND filter are both missing from the A7R.

I put the RX1 (full frame compact) in the test as well. This is a muddy as hell camera for video but it should give you an idea of what the A7 looks like, as it shares the same sensor.

All shots FJ 8534 VD in Film Convert unless ungraded.

Film Convert does not yet have a dedicated A7R or RX10 camera profile but I found the 5D Mark III Standard profile worked well.

1080/50p on the RX10 and A7R looks identical with no loss of detail, but on some shots you will notice more compression.