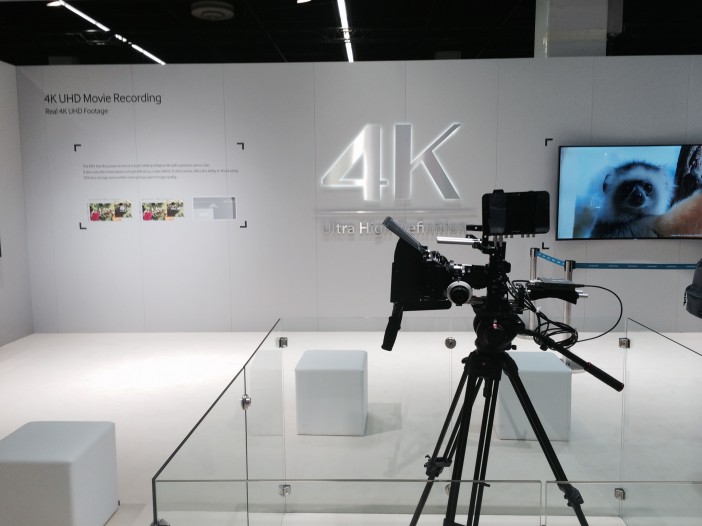 Of all the surprises recently and there have been a few, the Samsung NX1 is the biggest. I spoke to the very knowledgable Sung Lae Park of Samsung to find out the finer details and tried the pre-production camera.

Samsung had 4K DCI footage from the NX1 playing on an enormous 4K array of screens at their stand and at a rough count an enormous number of demo units, more than 20. The emphasis was equally on cinema and stills. The camera was rigged with an Arri matte box and to various displays, with the camera outputting a 4K feed over HDMI.

The source 4K file from the camera weighed in at just 910MB for 7 minutes 23 seconds of footage shot on the Pro quality setting. Once converted to ProRes 422 HQ the footage weighed in at 26GB. 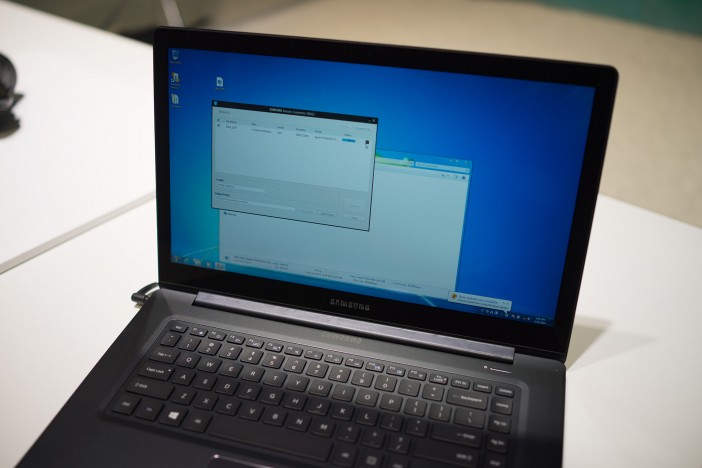 That’s simply extraordinary. The camera records H.265 at 80Mbit/s in Pro mode, 40Mbit/s in HQ mode. Samsung told me the Pro mode is equivalent to H.264 at 160Mbit/s but I doubt this figure, because to my knowledge H.265 delivers greater efficiency than that. Even at the lowest estimate, that’s 60Mbit/s higher and less compressed than the GH4’s already excellent 4K codec.

The Super 35mm sensor appears to deliver a very clean image free of moire and aliasing. I questioned Samsung on the readout resolution, because 28MP is a long way from the 8MP of 4K. 28MP is more like 7K! The answer had my jaw on the floor. Their sensor is able to do a full pixel readout at up to 30fps in 7K and so there’s no crop in 4K video mode. The image processor appears to be doing a very good job of scaling the 7K raw output from the sensor to 4K and Ultra HD. I didn’t try the 1080p modes but the camera does have a selection of these at up to 60fps and in slow-mo mode at the equivalent speed of conforming 90fps to 30fps, so in the ballpark of the GH4. Quality in this mode looked good but there’s a reason Samsung doesn’t state the frame rate in the menus for this. Slow-mo on the camera interpolates frames similar to Twixtor, so expect some trade-off in image quality because of that. 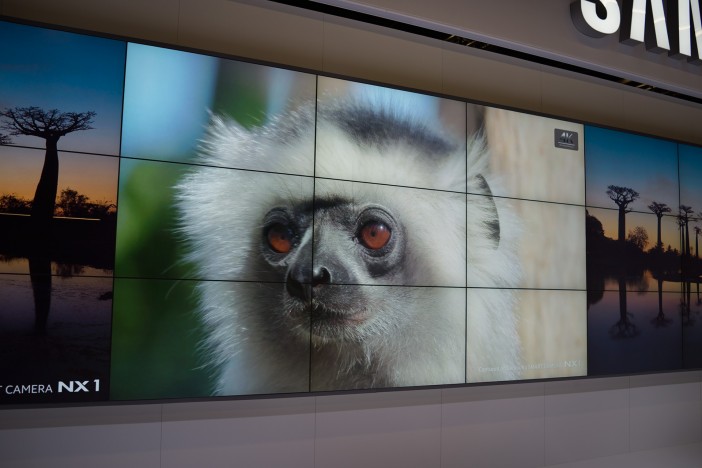 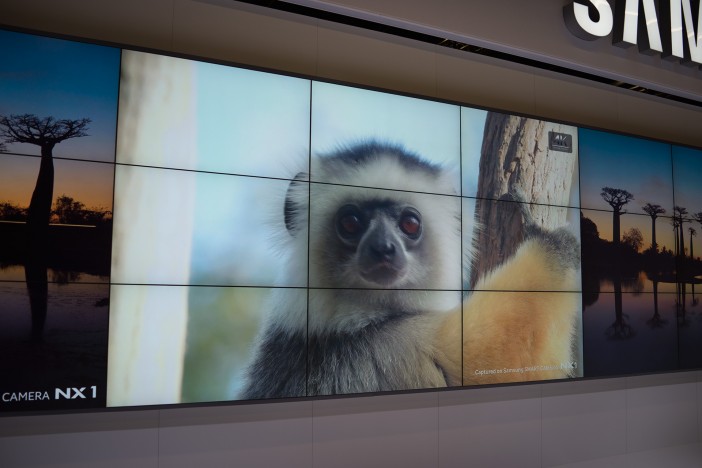 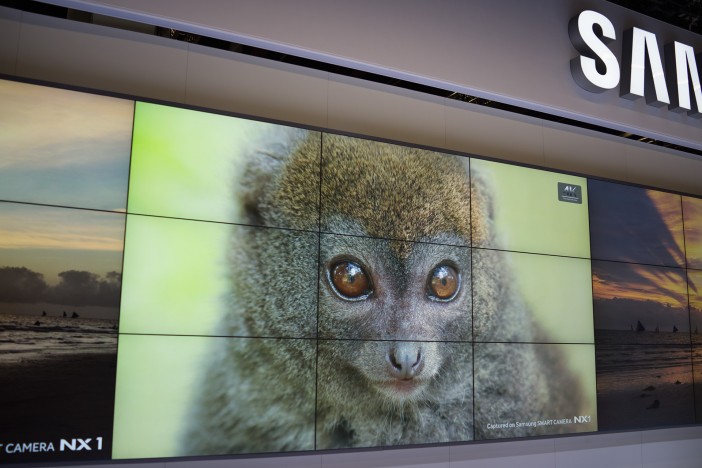 Rolling shutter was a curious mixed bag of performance. On one of the cameras it was ok at 50mm but at the telephoto end, around 150mm it seemed pretty jello-like. However I switched to another camera in another position and wasn’t able to replicate the same amount of skew despite being again at 150mm on the zoom. Since these are pre-production cameras as well, giving a firm answer here would be foolhardy. Jello wasn’t evident in any of the 4K footage Samsung showed on the stand.

The firmware was buggy and unstable. The camera is scheduled for an October release date and by then the firmware will be stable, but in my view Samsung have more work to do to the firmware than to make it stable. Although it’s a huge step up for filmmakers that Samsung have taken with the features, a number of things are just not right. Basic stuff, like getting 16:9 for video in live-view. You have to switch the stills quality to 16:9 (dropping to 24MP in the process) which is far from ideal if you also want to shoot stills at max resolution. Samsung need a mode on the Disp. button that toggles a movie-orientated live-view layout, since there’s no movie-mode on the mode dial.

The pre-production camera was PAL / NTSC switchable with both 25p and 30p being available in Ultra HD but not in 4K DCI, in common with the GH4 and others. The reasoning behind this is that 4K DCI is the academy motion picture standard and that is 24p. 25p is a PAL video standard and nothing to do with cinema. Whilst I appreciate that standards are important, it would be nice to have 4K DCI resolution available in 25p for PAL shooters who wish to avoid strobing and flicker with 50hz light sources in Europe and Australia.

HDMI is 4K so you can go straight to ProRes on the Atomos Shogun, as long as there’s no compatibility issues and the HDMI isn’t crippled for TV compatibility. Interestingly each resolution of HDMI output has a standard mode and a ‘clean’ mode. The hope has to be that Samsung did not just remove the icons in clean mode but removed any other obstacles to high quality external recording too.

The Samsung NX mount is a bit of an odd-ball, in that it has a long flange between lens and sensor compared to Micro Four Thirds or Sony E-mount. This might exclude the use of a Speed Booster adapter and Leica M lenses. Otherwise, expect old SLR glass (Canon FD, Contax Zeiss, etc.) to work well for Super 35mm 4K recording, with a shallow depth of field and 1.5x crop. Samsung’s own range of lenses are improving, with some genuinely nice high end options in the mix – though they are high priced.

On the pre-production model the in-camera menus were slow. I hope that is due to the firmware being in beta. Responsiveness needs to improve on the final camera.

The EVF was a little bit pixilated but otherwise good, whilst the main OLED LCD is superb looking and articulated. 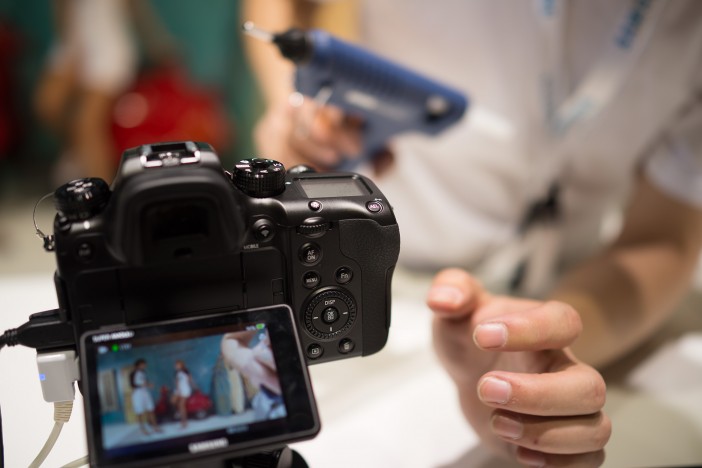 In terms of build quality and ergonomics the camera is good for stills and feels somewhere between a Canon and a Nikon for video, but with the advantages of better live-view for video shooting and an EVF.

I had no major complaints about the handling but it’s premature to make any conclusions.

Stills shooters will enjoy the speedy AF and top-LCD display, and whilst Nikon shooter’s will be at home with where the ISO / WB button is on the top left, Canon users will be left cold by it.

Basic placement of buttons overall is solid, with the video button being where it should be – directly opposite the main shutter button and not stuck out on a limb anywhere odd.

The camera is expected to cost just $1499, the same in Euros and on the basis of what I saw today completely annihilates the Canon 7D Mark II in terms of the technology under the hood.

This is the camera I had expected Canon to make with the 7D Mark II. That it comes from Samsung, is very ominous, considering the effect Samsung’s technology has already had on the TV market for various Japanese companies. If they do the same with consumer cameras, Canon will lose huge market share.

Welcome to the filmmaking world, Samsung.

NB: I hope to bring you an exclusive interview with Samsung about the NX1 later at Photokina, and I will return to use the camera again to go deeper into the features it offers. If you have any questions you’d like to see answered, now is the time to ask me on the forum! 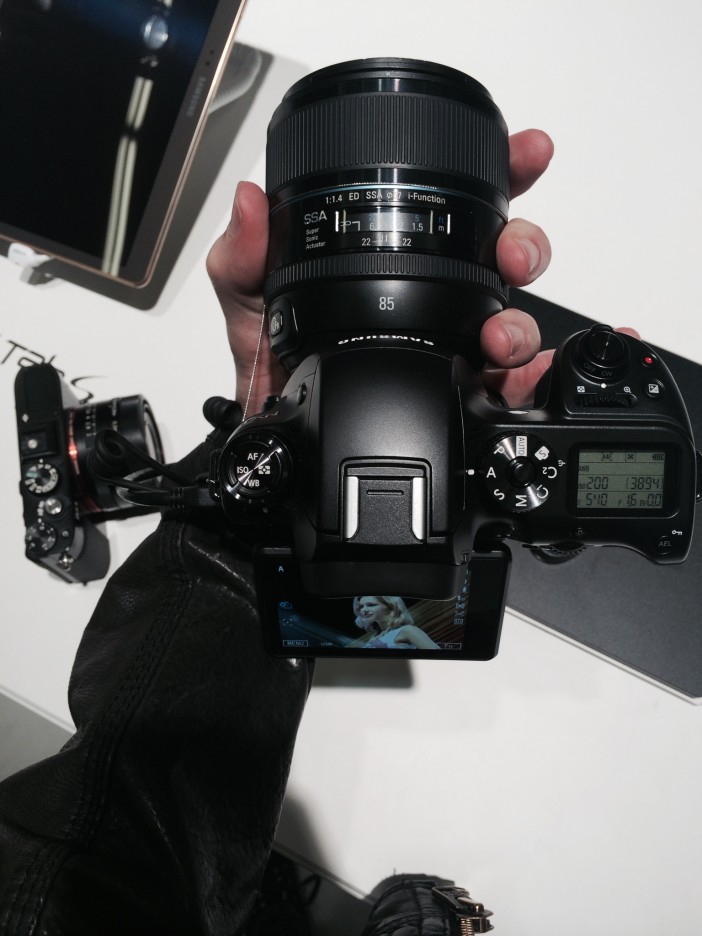 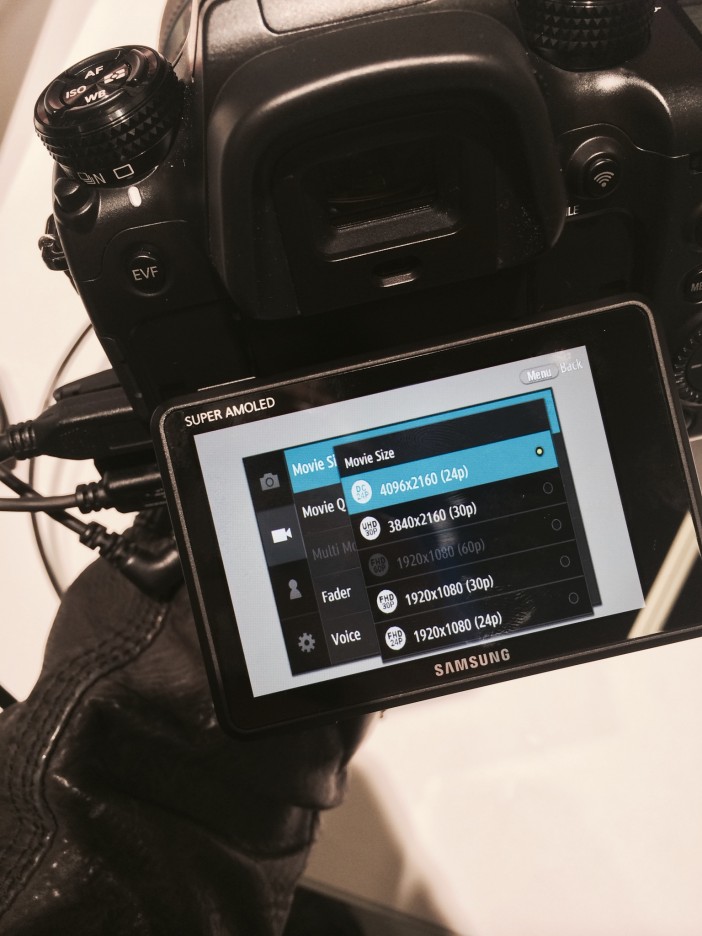