German website Slashcam recently tested the GH2 and AF100, and shot something which I never do – a test chart – with surprising results.

These only test resolution, moire and aliasing, not the balance or character of the image. Needless to say it is quite revealing that the GH2 came out on top.

The GH2’s was able to resolve more detail, with less moire and aliasing than the AF100.

The Sony VG10 was also tested, but despite being a dedicated video camera it did worse for coloured moire than the Canon 7D.

I guess Panasonic’s Pro / Consumer divisions are autonomous after all!

In my opinion, I think the GH2 has the luxury of time on it’s side, with improvements to the image processing (and possibly also the sensor) leaving the AF100 to rely on a video optimised optical low pass filter to reduce moire, which causes greater image softness.

Since the GH2 is a stills camera as well, Panasonic could not use such optical filters to help the video side, because 16MP stills would end up looking terribly soft at 1:1 pixels in reviews.

That leaves the GH2 open to moire and aliasing, and it goes to shows what a good job the electronics are doing that it doesn’t happen in a serious way.

Despite the GH2 being newer tech, I feel Panasonic should have waited and brought the AF100 to the market later, only once the image was at least as good as it’s much less expensive consumer ‘b-camera’. 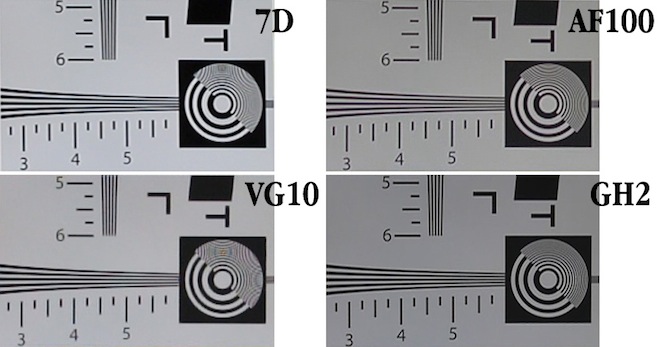