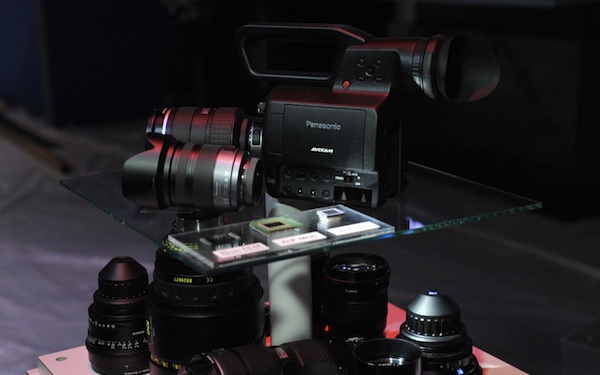 I’ve rounded up some juicy quotes from Panasonic’s broadcast / pro division product manager which you may find interesting.

“This camera (the AF100) delivers an uncompressed HD output, if you want to by pass the AVCCAM codec, you may”

That’s good news to say the least. This means you can record uncompressed RAW 1080p on Nanoflash via HD-SDI. The biggest gains in HDSLR video is not going to be from incremental sensor improvements, but by a huge leap in image processing. How about aliasing? Does it line skip?

“The sensor is the same as the GH1 Lumix camera, then we optimize it for HD recording. There will not be aliasing as we actually have a clue about what causes that and since we actually build video cameras, we can engineer in the resolution. So no aliasing.”

So no aliasing – there it is on the record officially – therefore whether it line-skips or not is academic. The clue in this quote is that it doesn’t line skip and the whole 12MP image is downscaled to produce the 1080p feed. Also the camera features an optical low pass filter, which wasn’t on the Lumix GH1 because it soften stills when viewed at 1:1, and DPReview would complain!.

So, live RAW output (4-2-0 according to Panasonic, not 4-2-2), image processing and low-pass filter – these are the biggest single leap image quality wise for the AF100 over HDSLRs. 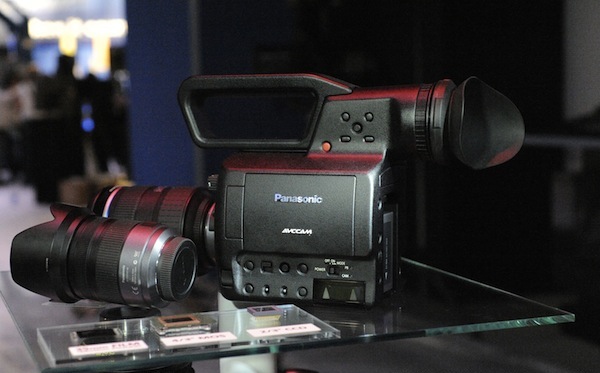 Many people are concerned the AF100 won’t feature AF. This is lens dependant. The GH1’s 14-140mm is currently the only true auto-focus video lens for the AF100 but I expect there to be more to be released with the camera. There is also the set of Leica primes to look forward to.

The camera has a removable handle too, to make it more compatible with underwater housing.

“The 4/3s chip set was a very logical choice for us in as much as we already had that, and from there we could develop a camera that was totally tuned for the cinematography market. We actually did invite about 30 DPs in, some of them fairly well known in the industry, and asked them about what they would want on this camera and while we couldn’t include everything, we have come pretty close. Since this camera will be optimised for the Video and not stills I fully expect that this camera will produce video that will look better than that which comes off the DSLRs today.”

So it’s clear they’ve taken an existing sensor and worked on improving the image processing side, they couldn’t have done this with a sensor still in development like the GH2’s new MOS chip. 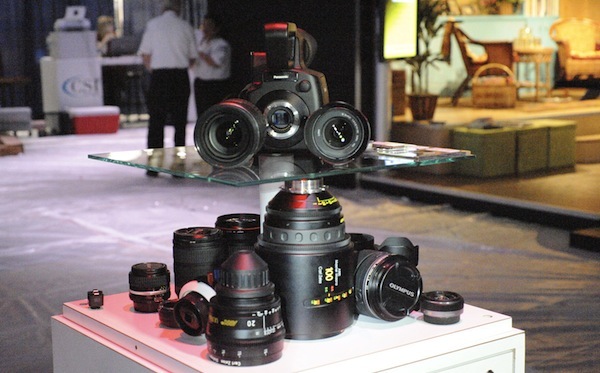 Key question next is what impact Panasonic’s AF100 strategy has on the GH2, most of which is already planned – hardware anyway. Will they choose to draw a line between the pro kit and the consumer HDSLR? The GH2 will feature a more recent sensor, will Panasonic risk it outperforming the AF100? Since image processing has the largest impact on a camera with an amazing sensor, you can bet on a few market segment ‘differentiating’ factors here between the GH2 and the AF100. All that hard work optimising the camera for video and developing new image processing chips has to be paid for, and that’s why the AF100 has a much higher price tag.