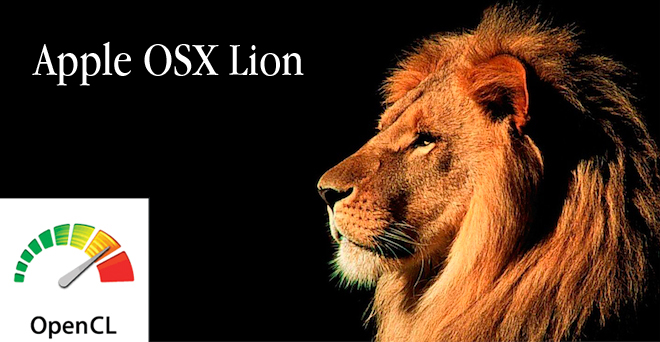 OSX Lion is to have an emphasis on a technology called OpenCL.

OpenCL allows normal apps to take advantage of the programmable nature of GPUs (graphics processors) in modern computers. GPUs are more powerful than general purpose CPUs but until now have only been used to crunch through 3D graphics. The graphics chip has long since stood idly by unless playing games but now is about to have a lot more influence over your everyday video apps.

Premiere Pro CS5.5 users may already be familiar with the concept…

The app uses NVidia’s CUDA, a non-open-source proprietary technology designed to do the same thing but only with a very limited set of NVidia graphics cards and apps. Most Macs don’t support CUDA in Premiere Pro, although some newer Macbook Pros can be enabled with this Premiere CS5 hack reported on EOSHD last year.

Along with 64bit support, OpenCL will supercharge editing. Some of the advantages of OpenCL will include:

Support for OpenCL has been around in most graphics card drivers since 2009. But it’s not yet clear how much video-card RAM Final Cut Pro X will require for OpenCL support – CUDA needed a whopping 512MB minimum which discounted most Macbook Pros prior to 2011.

Both AMD (now owners of ATI graphics) and Apple have thrown the weight behind the technology and it’s expected Intel will also join the party, who are suppling Apple with integrated graphics alongside the CPU in Macs and Macbooks.

The situation with NVidia hardware is more political, sadly. Apple are pushing the open standard, but NVidia want their own proprietary standard CUDA to be number one standard. NVidia have begrudgingly implemented beta support of OpenCL for developers, but it is not yet fit for purpose in apps yet.

Apple may be pressuring NVidia to have OSX Lion drivers ready with proper OpenCL support, to give Lion a competitive advantage over Windows. But Microsoft and NVidia have a close relationship and won’t want to see Windows + CUDA eaten by a Lion.

FCPX couldn’t come soon enough. It’s expected this month but there’s no official announcement yet. It’s possible last minute bugs may delay it. I still rely on FCP7 for some things and can’t even edit AVCHD natively or transcode 1080/60p, so I have to use Premiere Pro CS5 for editing my Sony HX9v footage – and playback in that is less than great (although fine for 1080/24p). Let’s hope 1080/60p editing works well in FCPX.

Snow Leopard users can also use OpenCL, although since Lion costs $29.99 and is a digital download available globally, it’d be a no-brainer not to get it.