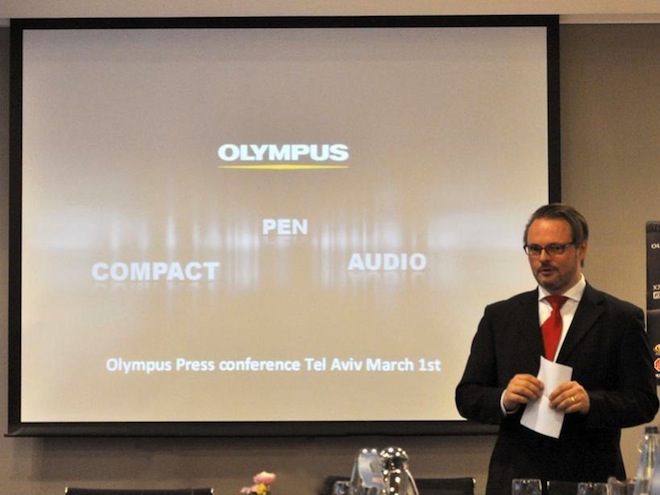 Olympus have been helpfully telegraphing their future strategy in Israel.

With Olympus having said that the E-5 would be their last DSLR and with Sony also turning their back on the optical viewfinder, the inevitable future is now in full swing (sush – nobody wake up Canon and Nikon!)

Olympus: “In 5-10 years reflex cameras will be a niche or will not be there at all. So we believe that PEN in the long run will also be in the professional market – but that will take maybe 2-3 years. In 2011 you will see more PEN products and more lenses (beyond what was discussed in the presentation).”

Olympus are working on a professional grade lens for the existing PENs, and the professional mirrorless E-5 replacement will follow.

The presentation took place in Israel, the country where a military company pumps out CMOS sensors for spy planes and RED’s digital cinema cameras. I believe in order for Olympus to truly differentiate themselves in the pro market with competitors they should enlist the same company to produce their CMOS sensors. Relying on a close rival, Panasonic, for such core technology is dangerous.

Olympus: “We consider optics to be our core technology and you see this thought all of our range.”

They better reconsider that because I’d hate to see them become simply an optics supplier in the digital age.

In Tel Aviv Olympus also showed off the inner workings of their movie optimised lenses (silent AF, OIS, etc. like the Lumix offerings) which is still something Canon and Nikon have not brought to the market yet.

Then Olympus demonstrated a new dual HD 1080p movie mode on their super-zoom camera which records 1080p from a 16MP sensor and has a simultaneous recording of crop mode and full sensor mode, albeit from just a small backlit CMOS. The user can then choose which part of the movie they want to ‘window’ in on, and the crop from 16MP to 1080p is recorded as well as the full frame. That seems like a nice logical progression to the GH2’s crop mode, though not an essential one.

Olympus have two major failings but imagination is not one of them.

They have a smaller R&D budget than their main rivals and almost all of their eggs are in the PEN basket (and optics).

They don’t make their own sensors.

Imagine how much more dominant Canon and Nikon would be if they looked to the future too? Surely they must be by now – probably behind closed doors until 2 weeks before the products come out.

If there isn’t a Nikon mirrorless by April and a Canon one by summer, I will eat my DSLR.