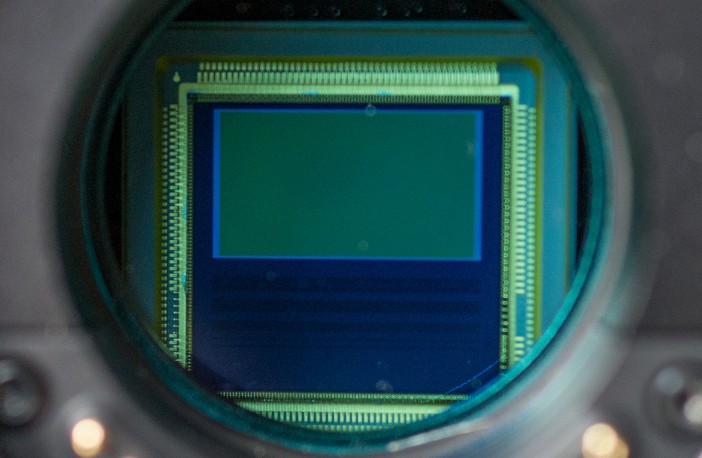 I have some information on a new 4K CMOS sensor which may or may not be announced at NAB in a future Blackmagic camera.

The new chip increases sensitivity by 67%.

Global shutter remains but the gap this created between light gathering pixels on the old sensor has been greatly reduced.

Fixed pattern noise is decreased at higher ISOs and the readout rate of the sensor has increased in the ‘window’ modes. These are 1:1 crop modes to achieve 1080p and 720p without pixel binning at a very high readout speed. The new sensor goes to a maximum of 900fps in 1080p windowed mode. However the image processor will not likely be able to run at this speed so the final frame rate on the camera is much more likely to be in the 240fps region for 1080p.

The maximum in 4K of the new sensor is 240fps. This is actually lower than the old URSA sensor which does 300fps if backed onto powerful enough processing. However I can see the processing side of any new Blackmagic camera being able to cope with 4K at 120fps in ProRes, or perhaps even a 120fps raw output via SDI.

The new sensor has a 16:9 aspect ratio and matches exactly the Ultra HD resolution of 3840 x 2160 while the previous CMOSIS CMV12000 sensor was a 4:3 chip of 4000×3000. Hopefully though Blackmagic will add an anamorphic mode which takes a 4:3 crop of the new sensor simply by cropping horizontal resolution.

Incidentally Blackmagic just announced a firmware update for the URSA which supports 150fps in 1080p ProRes. You can see the crop factor with this handy test with the Sigma 18-35mm at 18mm from DP Daniel Peters:

The image I had in 2.5K raw from the old Blackmagic Cinema Camera was beautiful. The 4K URSA and Production Camera were a departure from this with different qualities. They do not have the dynamic range or low light performance, sacrificing these for 4K and global shutter.

I’d like to see Blackmagic offer two choices, one based around a new Super 35mm 4K sensor with high frame rates, and one based around a 2.5K 13 stop dynamic range chip. 2.5K is a great middle-road between 1080p and 4K for me and very much under-appreciated.

The next 4K camera could be a larger more expensive cinema camera but with much reduced size compared to the URSA and better ergonomics vs the Production Camera and BMCC. The URSA is amazing but just too big for me. The 2.5K camera could be could be a small mirrorless-like beast perhaps with Micro Four Thirds mount but much better all-round ergonomics, 2.5K raw, more compression options for raw and much improved audio.

If any of the current mirrorless cameras like the Sony A7S had 2.5K raw with 13 stop dynamic range I’d buy it in a heartbeat.

The small battery consumption, built in EVF, quick to use stills camera controls and small body coupled with such a power-house image would be my ideal Blackmagic camera. I’d happily pay up to £3000 for this, though I hope Blackmagic continue to knock down price barriers on the lower-end cameras.

Blackmagic seem at the moment to be more focused on the broadcast markets. Let’s hope they haven’t forgotten the consumer BMCC and BMPCC crowd where the real money is!! 😉