Some say Tarkovsky shot with them. Some say that even rubbish DPs can look cool with a pair. Some say a German lens company named Hawk stole the guy who designed them. All I know is – they’re Russian anamorphic lenses from the 1970’s.

I recently bought a Lomo anamorphic from the Ukraine. It is a bit like a Panasonic LA7200 on steroids. If it were a man it’d be Vladimir Putin.

Backing onto a specially made prime lens, the anamorphic was designed to go on a Konvas 35mm film camera, and was used to make the original Solaris which baked into culture the look of modern sci-fi. In a big metal Russian oven.

Some lenses are scientifically perfect. Some are designed by the world’s best technicians in a lab. Anyone can have this look, just order an Canon L lens online. This isn’t for me – the designer of the lens must also be an artist or crazy. I don’t care if it’s a bit soft, it could make up for it in character. Anamorphic lenses are the most characteristic of all – if they were a pirate they’d be a proper one – not Captain Jack Sparrow.

I have adapted this to use a Canon FD prime instead of the Lomo OCT 18 mount prime. The old Canon lens has a radioactive thorium coated element. As it decays over a number of years, radioactive particles warm the image and increases contrast. It’s also known for yellowing slightly which increases the punchiness of black and white footage. Several glass grinders possibly perished in it’s making, before the time of health, safety and not using nuclear materials in cameras. 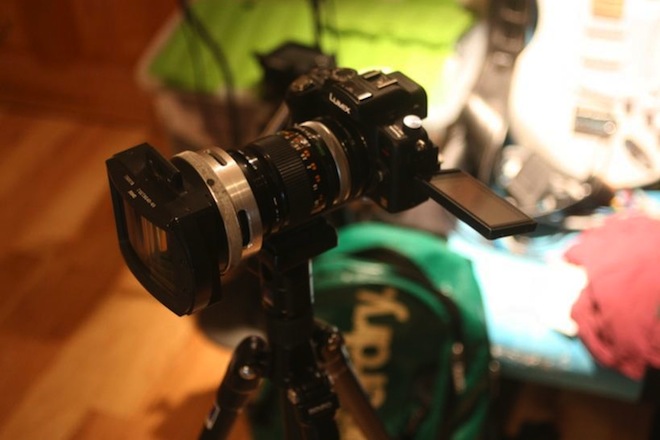 At the front of the Canon 35mm F2 SSC is a concave element which is also quite unusual by today’s standards. Most lens fronts are curved outwards – some wide lenses bulge significantly. This one bulges inwards slightly, meaning you can get the Lomo anamorphic rear element as close as possible to the prime lens and avoid vignetting or punching a Russian anamorphic shaped hole in your nice Canon lens.

The Lomo anamorphic has a prism at the rear, very similar to the Panasonic LA7200. It can be removed and you can clean inside the anamorphic. The front looks to be certainly more than one element, and this is the part of the anamorphic which gives those fantastic blue horizontal flares.

As well as the Canon FD, the anamorphic can be mounted on other prime lenses since it has a standard 62mm thread on the back. Very lucky. I tried coupling it with a Zeiss Jena 35mm made in East Germany thinking that would work well because they’re both a product of communism. But the sweet spot I returned to again and again was the Canon FD 35mm F2. I have no idea why! It just works better on the Canon.

One of the biggest tragedies of modern lenses is that they’re coated to death. This is done to reduce flare and therefore increase contrast – but it removes tons of different styles and expressions of flare. Flare is muted and censored for the sake of slightly better contrast which is a clinical approach to lens design not an artistic one.

To flare well an anamorphic lens needs a prime lens behind it which is also nuts.

Let’s forget about the anamorphic part of the lens for a moment and talk primes. The OCT 18 Lomo lens behind mine was part of the deal – a 35mm F2.5 – which goes to F2.9 because the Russians found the glass varied from unit to unit!! Q/A did not exist like it does now. The prime is fantastic by itself, don’t get me wrong – very very very sharp but my Lomo prime has issues with the anamorphic it was apparently designed to work with.

My Lomo as it was delivered was a complete mystery. The anamorphic simply doesn’t focus with the supplied prime like it’s supposed to. Either the focussing mechanics which fit over the lenses and join them together is wrong or faulty, or I am lacking something at the mounting point to the camera which allows the lens to focus. I suspect there is something in the original Konvas camera that allows the lens to move back and forth relative to the film plate. So although I can mount OCT 18 and PL mount lenses fine to my GH1 I had to replace the prime lens with one which could focus with the anamorphic, hence the Canon FD. Moving the infinity fixed focus Lomo prime fractionally back and forth relative to the sensor allows it to focus, but I just don’t have the mechanical parts to do this in a practical way on the GH1 yet.

To reiterate though, when I focus by hand it does take incredible images as a prime 35mm lens – lovely smooth bokeh, zero distortion and tack sharp wide open. I’m keeping it.

Since the construction of an anamorphic is so open, and so adaptable, part of the enjoyment is being forced against your will to see how lenses focus light into a narrow focus plane at the point where the sensor sits. It’s amazing. I feel after receiving my ‘difficult’ Lomo anamorphic, I am becoming a lens engineer against my will. My final set-up is a bit like an Iscorama set-up. Focus the anamorphic, and focus the standard camera prime in unison (i.e. both at 6ft or both at infinity) as long as you match them up you can go from 1m to infinity with the anamorphic. Yes it’s a bit of a pain and yes it’s useless for pulling focus during a shot but fine for locked down footage on a tripod. I have decided not to become a lens engineer!

My Isco Centavision can have a lens focussed on infinity and just focus by itself which obviously is preferable. I will try this with my Lomo prime which is fixed on infinity (UPDATE – it works but vignettes). This Lomo anamorphic and my Proskar (Kowa clone?) seem to be fussy. I find it strange that the Lomo needs the simultaneous focus of the prime since it came with a lens fixed on infinity and seemingly no mechanics to allow the prime lens to change focus – it may just need a lens technician to realign it somehow but for now the Canon FD solution works great.

In terms of sharpness the Lomo anamorphic is better than the LA7200 but without heavy modification it also needs stopping down for it to not being anything other than soft.

At F2.8 you do notice more at infinity how soft an anamorphic is at fast apertures, much more so than on portraits or close ups. This would be more of a worry if…

A) Shallow depth of field really mattered at infinity – it doesn’t!!
B) DSLRs were not getting more sensitive.

The Lomos are a good investment. Already the GH2 is usable at ISO 3200 despite it having the most densely packed sensor of any DSLR or mirrorless on the market today. The 5D Mark III will be a beast in terms of sensitivity, we’ll be happily shooting clean video at 128,000 I expect – so an aperture of F5.6, even in natural light, is a sacrifice you can afford to take 1 year down the line for sharp infinity focus.

Right now, F2.8 is a bigger benefit for portrait and close up shots especially in dim light, where absolute sharpness is less important than a shallower depth of field and better low light performance. The GH1 does not like to push beyond ISO 1600. I am able to get clean(ish) ISO 1600 from the GH1 when properly exposed, and with lights I can drop to ISO 100 just fine with the anamorphic. If you’re shooting somewhere that isn’t well exposed at F2.8 and ISO 1600, you’re stuffed, because the GH1 looks awful underexposed – fixed pattern banding shows and noise levels go up. The GH1 does not use a traditional CMOS sensor – it is NMOS, a cross between CCD and CMOS, which gives it this characteristic. GREAT at ISO 1600 when you have the wider aperture and enough light but awful if you don’t.

Of course anamorphic lenses do need more light than a F1.4 prime for example – but show me an anamorphic lens, even a 50k Hawk, that can shoot sharp at F1.4. They don’t exist. Oh wait – the Iscorama 36 and my Centavision with a high quality doublet diopter are quite sharp at F1.4! Damn those cheap 2k anamorphic lenses! (More revealed next week on the diopter subject).

The Lomo lens then has great potential. With the Canon FD 35mm F2 it is the best balance you can get between authenticity and practicality. I’d like to get the original Lomo lens mechanics sorted out for the GH1 of course – but the gains in terms of image quality would be small or even maybe a backward step – the Lomo prime is very sharp by itself but not as sharp with the anamorphic as the Canon FD. Strange I know.

I’ve only just had this week to get to grips with this strange new world. Check back for part 2 and more footage. Thoughts, opinions and ideas represented in this article are subject to change at any time.