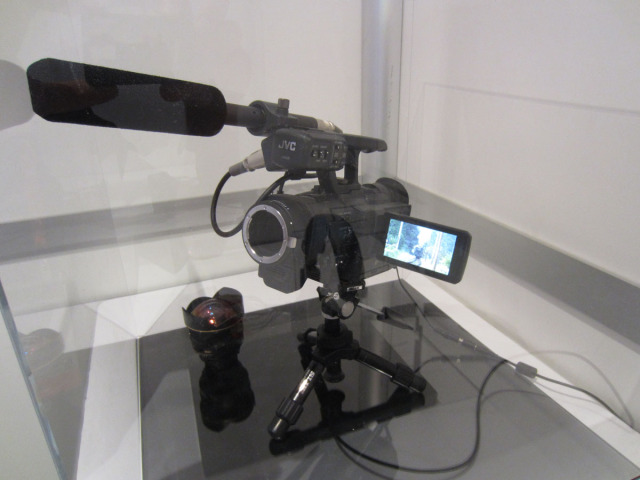 On this day exactly 1 year ago EOSHD reported on a rare sighting – a 4K digital cinema camera with Nikon mount from JVC.

This product has quietly matured into something nearing release with a rumoured launch date of April 2012 at NAB and a rumoured price said to be under $9,000. However since this is JVC we’re talking about, something is probably odd about it.

Does this cut the mustard? 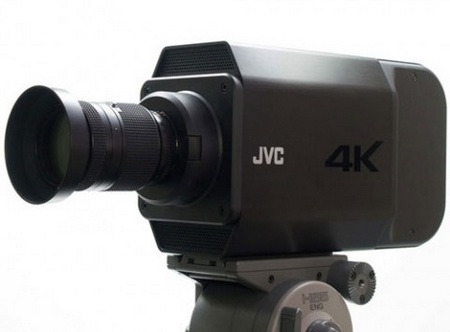 Above: the old prototype JVC interchangeable lens format 4K camera. I quite like the retro simplicity of it!

With the quad-HDMI lash-up on the HMQ10 clearly JVC missed the memo about HDMI V1.4 which supports 4K over a single HDMI cable and is the future standard of 4K TVs.

They missed the memo about interchangeable lenses and a large sensor too. The HMQ10 has a 10x zoom lens and  4 SD cards for recording a 4K image divided into 4 quadrants at 1080p each from a small half inch sensor. It is a lash up of 4 standard 1080p image processors and the kind of SD card I/O interfaces you’d find in your Dad’s digicam. Clearly development moved so glacially on this that at the time of devising the specs neither HDMI v1.4 or SATA 3 SSDs existed. Both technologies are cheap components, with SATA 3 featured on PC motherboards circa $50 and HDMI v1.4 being present on anything from the XBox 360 to the Nikon D4.

Will this interchangeable lens camera be a major improvement?

The as yet unnamed JVC 4K interchangeable lens cam does away with these quibbles. It also has a larger sensor, though the 1.25″ imager is not as large as Super 35mm or the 1.5″ sensor in the Panasonic GH2 / AF100. The choice of Nikon mount is also a little odd for a cinema camera as well (no PL mount!?).

The camera is said to have an HD-SDI output, although this is not confirmed. Bizzarely, JVC man Craig Yanagi spoke at CES of ‘asking the filmmaking industry whether they wanted HDMI or HD-SDI connectivity’ on the camera. That is like Porsche asking their customers whether they want doors on their cars.

Couple HD-SDI with XLR audio jacks, 24p, full manual audio control, built in EVF and LCD, and JVC will have a contender. Essentially a Canon C300 but 4K, for under $10k and they are going to be right in there.

I am just very curious as to why you’d cobble together a 1.25″ sensor and Nikon mount when you are competing with Super 35mm, the full frame Cinema EOS 4K DSLR and cameras with PL mount.

JVC are being very brave – but it looks like they might not have quite the resources to compete with the big players in digital cinema.