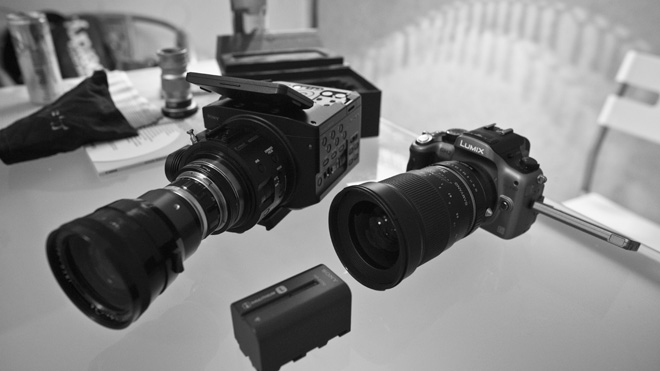 I’ve had my suspicions for a while now about AVCHD footage having a different exposure on my Mac to on the camera. When I edit my GH2 and FS100 stuff natively in Adobe Premiere Pro CS5.5 or the new CS6, or preview AVCHD MTS files in VLC Player (Quicktime X still does not support AVCHD) blacks are crushed and the image is darker overall with far less shadow detail than on the camera’s LCD.

The problem isn’t limited to shadow detail. Highlights are clipped as well. This is very noticeable on the FS100 where the camera has a steep roll off from highlights as it is.

Overall the dynamic range of the camera is reduced 1-2 stops by OSX.

I am not sure whether this negative affect is baked into the footage or if it is related to a playback issue in Quicktime’s H.264 decoder. I’d say the latter because my existing footage shot over the last year, which is up on Vimeo doesn’t seem to suffer when viewed via a TV set.

But the problem is, many many people download or watch DSLR / Vimeo footage on their Mac’s display. The problem remains throughout the workflow and on your audience’s hardware when they watch your footage.

You must transcode FS100, GH2 or NEX AVCHD footage to ProRes using 5DToRGB. Fail to do this and you risk baking in severe clipping in the shadows and highlights, which will harm the way your footage looks on Vimeo and when watched by other people on their machines.

There’s no need to touch the gamma correction box, or chroma mode and post-processing. Just make sure you use BT.601 as the decoding matrix and Full Range for Luminance Range.

Now you can import the resulting ProRes clips into your NLE of choice and edit with the accurate exposure and dynamic range at the time of acquisition. Below is an example shot on the FS100. The native AVCHD frame grabs are from Premiere Pro CS5.5. 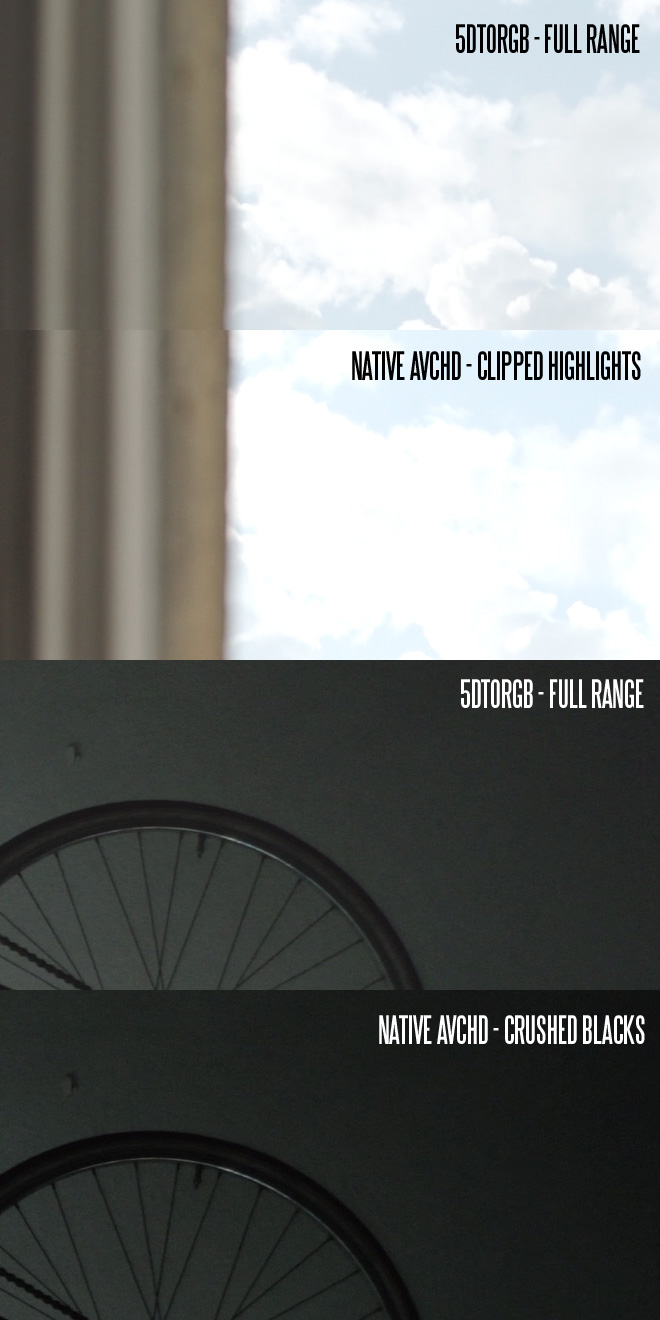 What about Canon stuff? H.264 seems unaffected in Premiere Pro or Quicktime but VLC Player does pull the gamma down a tiny bit. It does not seem to clip the blacks and highlights.

I really think Apple need to take an urgent look at this bug as it has been around for ages now. I’ve had two MacBooks (my new one is the latest refresh of the quad core MacBook Pro 17″) one with NVidia GFX, one with ATI GFX and be it a Snow Leopard or a Lion they both exhibited the same issue – on an external monitor as well as the MacBook screen, but NOT on a TV via HDMI (which only does 15-235 broadcast safe 709 unlike a computer display which is 0-255 601).

Opinion is divided as to the cause. Some claim it is to do with the broadcast range of 15-235 BT.709 footage not being converted to the full 0-255 of your display when it is decoded (for playback) resulting in a severe clipping of the blacks and highlights. Others say it is a Quicktime gamma issue. Which is it Apple? I for one am waiting for your answer…