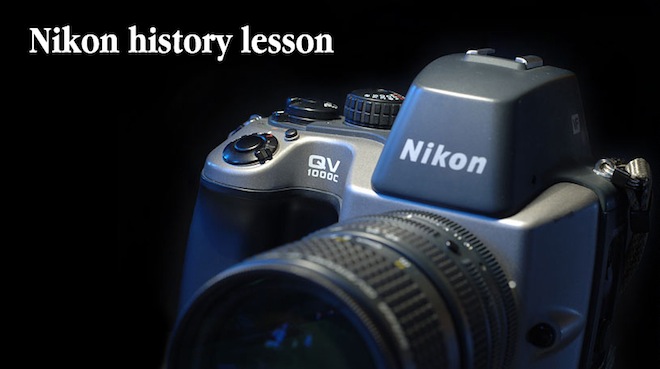 Above – the first ever Nikon SLR capable of producing digital images, in 1988

First a bit of history – on the genesis of Nikon’s digital camera division.

Nikon invented their first electronic SLR in 1988, the QV-1000, with the intention on selling it to newspapers. It was not a true digital camera, it did not have a CCD or CMOS but it had electronic processing built-in and could produce digital files at 720×480, the NTSC video resolution.

The QV-1000C was the first ever camera that produced a digital image for print. The photo was of Margaret Thatcher opening a printing plant in London’s Docklands in 1989. The image was transmitted by fledgling mobile phone to the Evening Standard’s office, who then sent it back to the printing plant where Thatcher was just finishing her tour. They printed the newspaper containing her photo, and handed her a copy much to her amazement.

Also in 1988 Nikon turned down the chance to buy Photoshop.

Tragically, in my view, Nikon saw itself as a hardware supplier and did not see any reason to extend the Nikon brand into software or services. In 1988, at the MacWorld show, the Nikon team was approached by two brothers who offered them the rights to market an imaging software application. The brothers were Thomas and John Knoll. The application was called Photoshop.

Although the US and European Nikon HQs were enthusiastic about the idea, the Japanese bosses turned it down, siting that Nikon was not a software company and that no EXISTING market existed for Photoshop.

This attitude exists to this day with the Japanese corporate giants. Unless there is an existing market to jump into, they don’t forge ahead and produce something. Canon and Nikon are reactionary companies when they should be pioneering new ground and opening up new markets. The least conservative camera companies are the ones with the least to lose. Panasonic invented a new market – mirrorless – only because they had no photographic legacy and a weak start with Four Thirds.

Video is being asked for of stills guys, according to Sam Morgan Moore. A professional snapper turned DSLR video shooter, he says that clients in the UK are constantly asking for video as well as stills work. The internet, corporate video, and content rich websites are driving demand for video but Nikon don’t take it seriously because they are a ‘stills’ company. Are Nikon about to ‘lose Photoshop’ again?

According to my source Nikon had to dragged ‘kicking and screaming’ into the digital full frame market, and regard video on a DSLR as ‘low end’.

“The conversation [with a Nikon exec]was depressing – video was seen as a mid-to-low spec attraction and serious people do not need it… talk about head in the sand… they are still not putting the force of the technology they have behind this… You can draw a connection with Nikon’s year in year out attitude to a stills full frame sensor… Canon and Kodak and even Contax had done it (with the N-series Digital)… but Nikon’s statement was ‘we think a 35mm sensor is not needed as in are labs we are producing sensors that are just as capable APS-C size’. (D1X, D2X were APS-C DX not full frame, with 1.5x crop, it wasn’t until the D3 that Nikon’s top end DSLRs went to FX). Eventually they were dragged into it when they started loosing prestige and market… When they did go 35mm it was a stunner… Nikon have people that have raw talent considering how much bigger Canon are… Canon’s highest end stills cameras should be 18 months ahead of Nikon but Nikon I think are better, certainly in low light.”

It is a shame that such engineering genius is being throttled back by such unimaginative risk averse management.

Serious people don’t need video on a DSLR? There’s no doubt Nikon feel this way – otherwise, why put minimal effort and the world’s worst codec on the professional D3S, only to add 1080p to the consumer low end D3100 a few months later? The D7000 meanwhile is virtually unusable since it doesn’t simulate exposure in live-view mode, until record is hit.

Nikon were late to the Super 8 party in the 70’s as well. The difference is, this time in a world of convergence giving video short shrift will hurt them as much as the iPhone has hurt Nokia.

“When the Super 8 film format was invented by Kodak in 1966 all the major companies big and small jumped on the home movie craze including Nikon… (Super 8 peaked in 1977 with millions of users but later declined owing to the difficulties people had with exposing the reversal film, now with digital it is as easy as flicking a switch).”

“Quickly Canon started releasing many different models to appeal to different segments of the market. Leica, Braun, Nizo Canon and Beaulieu all made fine cameras. Nikon produced some entry level models but it was a very poor show when compared to the ground breaking masterful still cameras they were making. Super 8 film makers asked what the hell is this great company up too? It turned out very slowly a project within Nikon was under way started in the early 1970s. 2 cameras the Nikon R8 and the Nikon R10.”

“The boffins had amongst them all the top cameras from the competition, they wanted to make something better…but they were taking a long time at last the cameras were released in 1973…but not really available until 1974-75.”

“The R10 and R8 were beasts almost military spec a stunning piece of engineering – rock solid transport one of the best zoom lens ever put on a Super 8 camera – one of the finest Super 8 cameras ever made, hail the boffins the engineers, but it was too late and the camera was too expensive. By the mid 70s Super 8 was peaking… The users had already chosen the company they had liked years earlier…”

“It was only the Nikon semi pros that bought into the R10 concept. The camera was just too good and complicated for Joe Public. Canon surged ahead with a massive array of movie camera models for amateur and semi pro even releasing 16mm cameras…history seems too repeat in the Nikon ultra conservative world…have they again missed the boat?”

“After they failed with the marketing and the timing of the R10 they put the elite super talented team into developing a home video system and after the dismal failure of this they went back to stills camera and optics, fingers and tails burnt. This time they cannot do this – video in stills cameras is here too stay.”

“Panasonic must be causing Canon and Nikon sleepless nights. They have the broad range of technologies needed too take on these 2 giants. Nikon is in a difficult position they cannot run away from movie makers as they did in 1976-77.”

If Nikon (and to an extent Canon) do not wake up to convergence and a rapidly changing market place, the electronics giants will eat them alive.