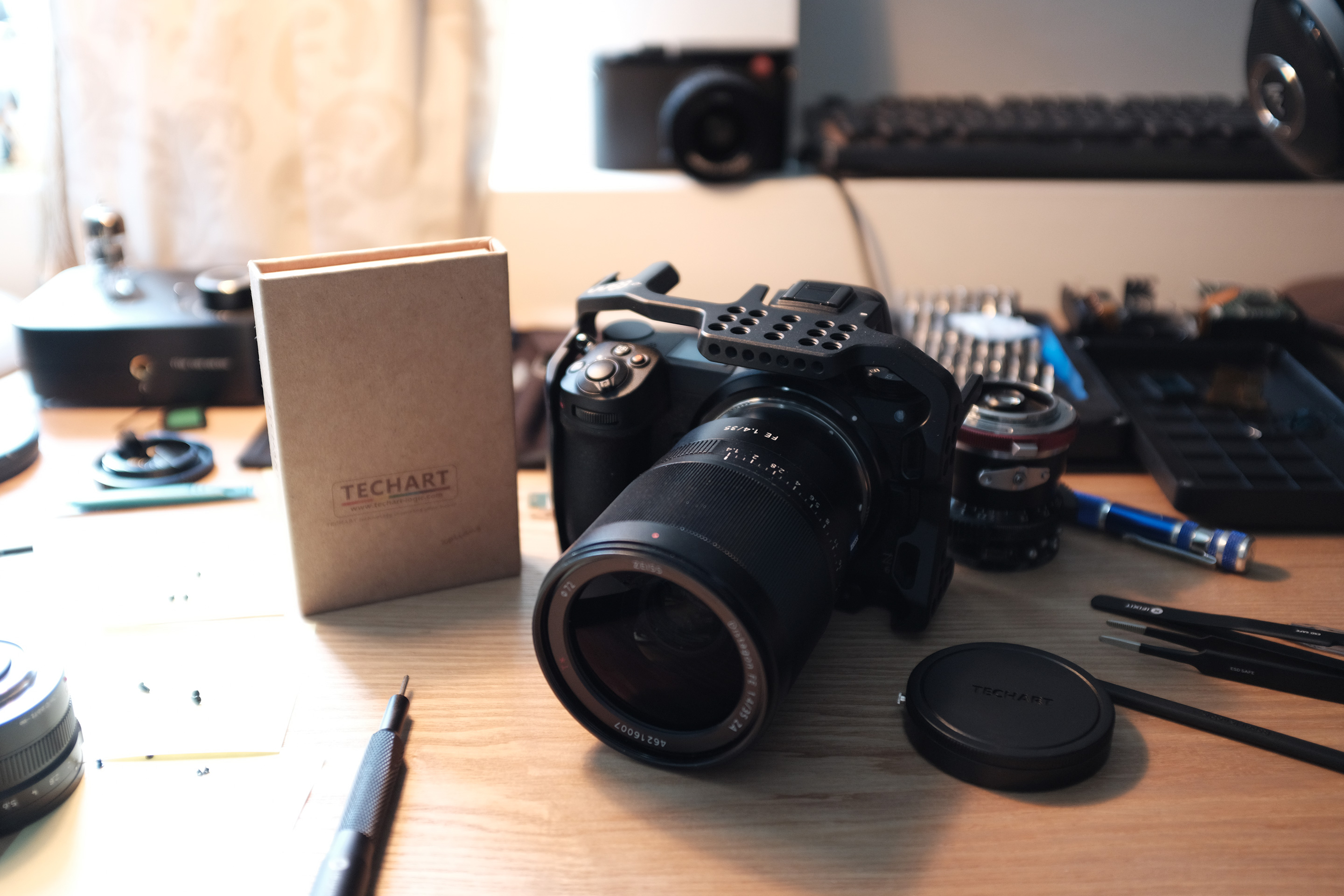 I have quite a few game-changing Techart adapters but this one takes the biscuit.

Here’s my first look for the autofocus adapter on the Nikon Z6/Z7, which essentially converts the camera into a fully featured Sony E mount body.

In stock now on eBay

Disclaimer: I bought the adapter myself on eBay as soon as it went on sale. As the adapter has only just arrived from Hong Kong in the UK, this isn’t a full review and my initial impressions about reliability will change as have more shooting experience with the adapter.

The TZE-01 is a revelatory piece of kit for me, as somebody who thinks Nikon seriously messed up their Z series lenses and pricing.

I’ve been a Sony E mount user for as long as I can remember and the great bulk of my investment in lenses over the court of running EOSHD and my filmmaking in Berlin orientated towards Canon EF mount and Sony E mount. I have over 50 adapters to these mounts for other kinds of lenses. I have a lot of native Sony lenses, like the superb autofocusing Zeiss 35mm FE F1.4 and great Super 35mm glass like the new Sigma 30mm F1.4 ART for E-mount. I can confirm these both work on the Nikon Z6 with phase-detect continuous autofocus, both in video mode and stills mode. The adapter does a very good job at replicating the performance you get with these lenses on a Sony body. It is fractionally behind in performance but not by much, and not far off Dual Pixel AF either. Here’s a first peek… 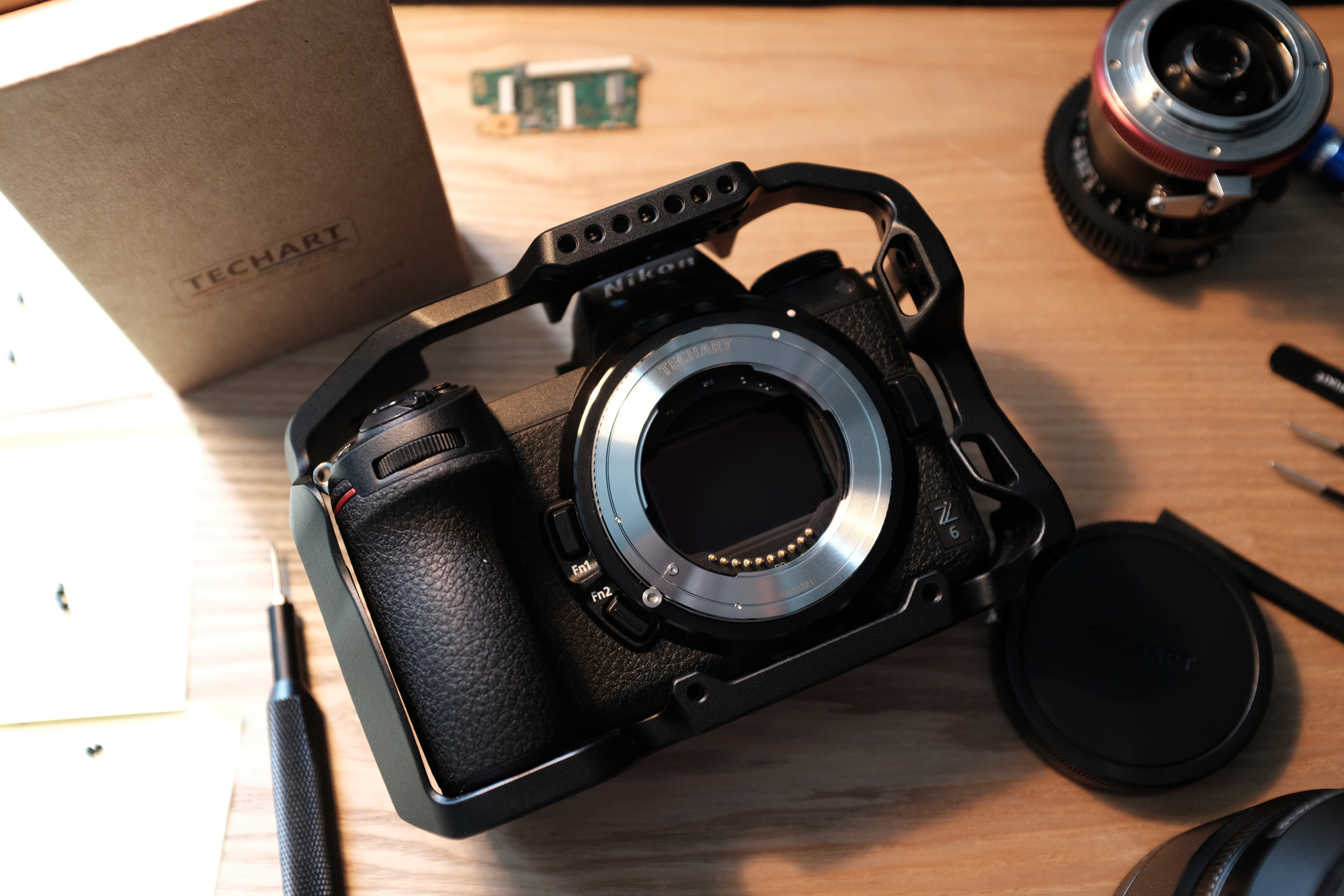 In terms of reliability, in my short first test, it was difficult to get a full picture of such a complicated topic and I don’t feel the autofocus reliability is going to be same as a native Sony body – neither do I expect it to be. Neither has it been a problem so far with the few lenses I’ve tried since the adapter arrived today. It’s pretty good. Pretty, pretty, good.

Obviously anything like this, including speed and tracking, changes from lens to lens.

And even adapter to adapter. 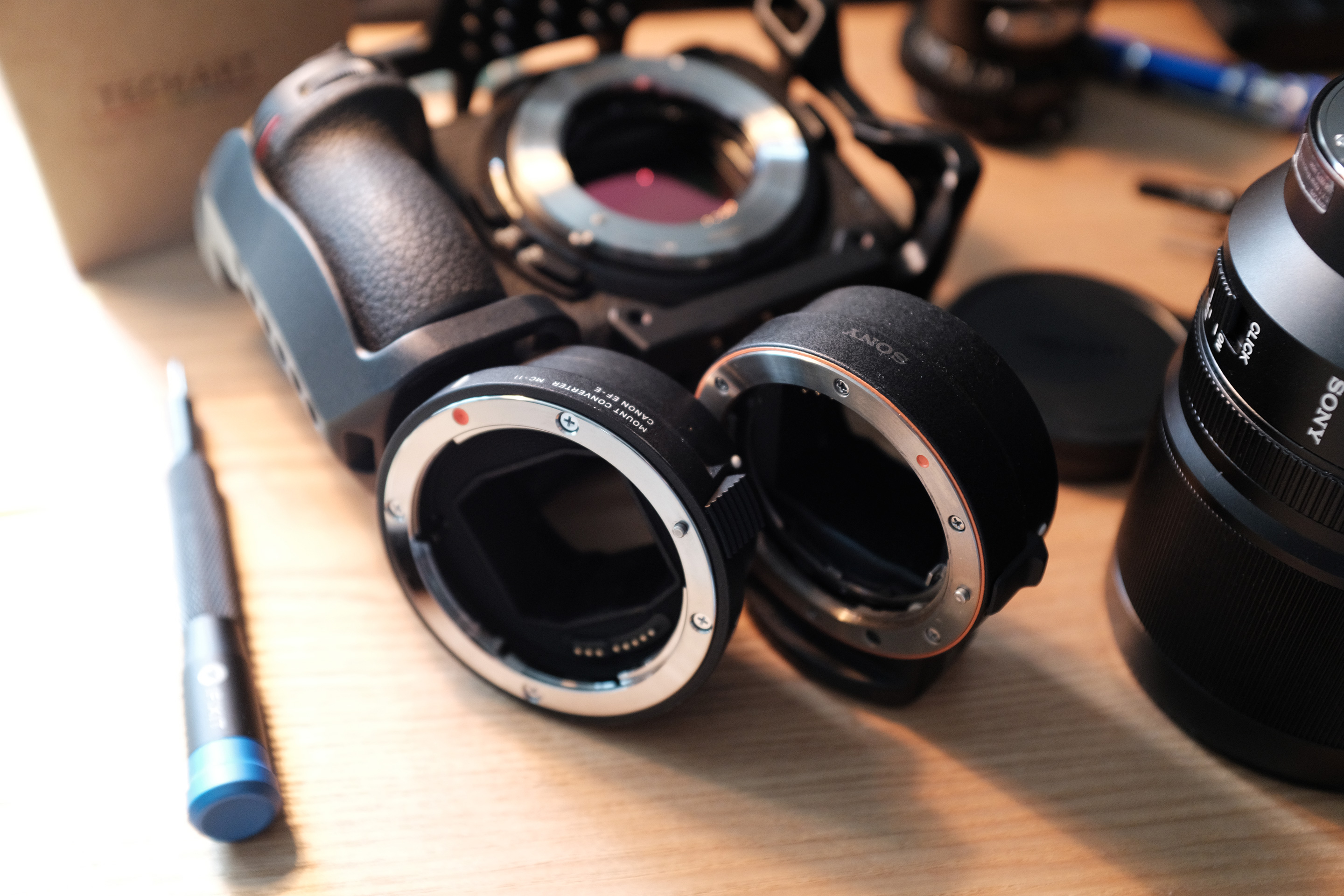 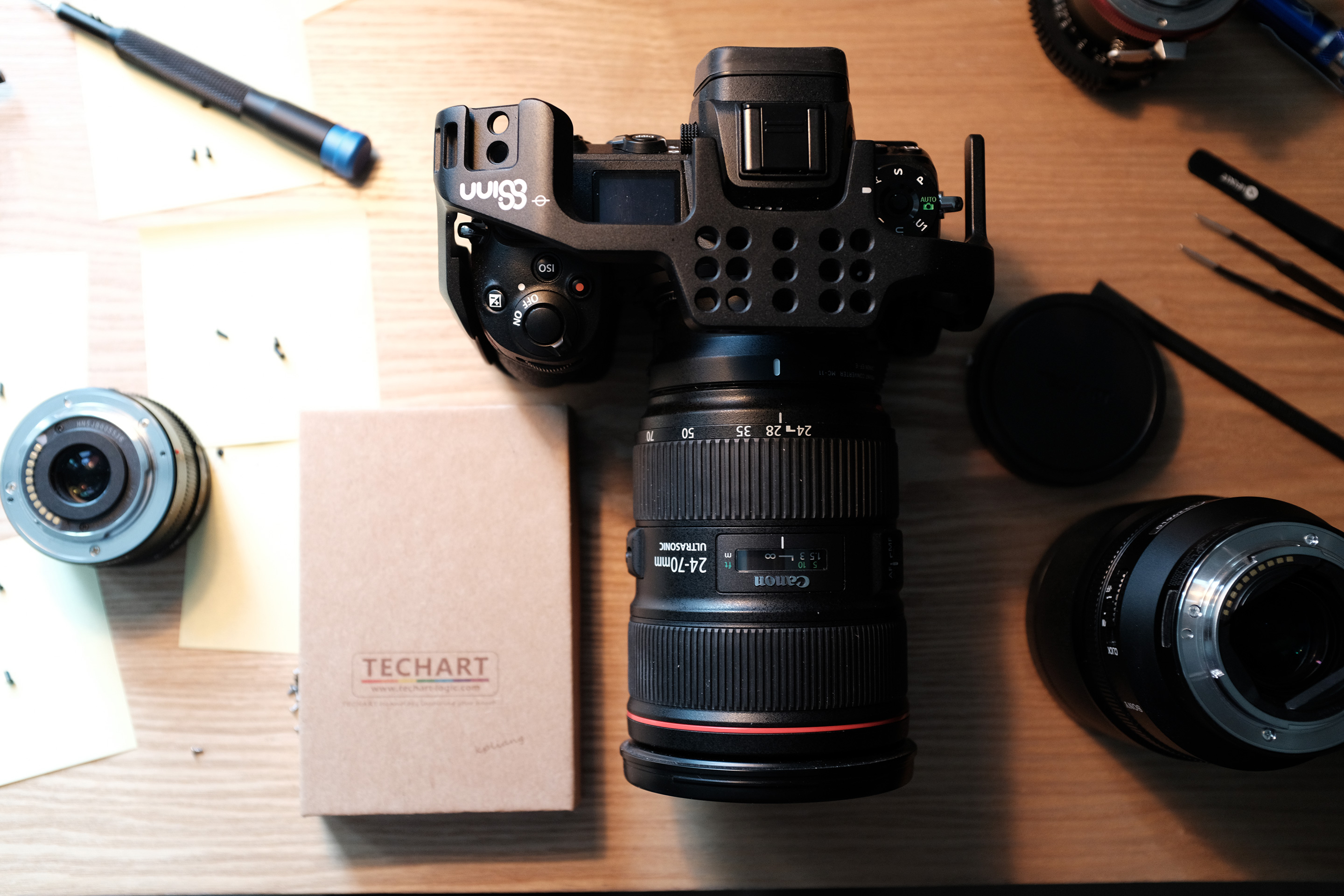 I am glad to report the Sigma MC-11 Canon EF adapter for Sony E mount does indeed stack on my TZE-01 and Nikon Z6. Yes, phase-detect AF with all Canon EF lenses on a Nikon body for the first time in the history of the camera industry. This is a world first. It’s fast as well, although not as fast in my tests so far as the Sigma MC-11 on a native Sony E mount body like the A9 or A7 III. Is it good enough for pro sports? No. Is it good enough for filmmaking and general shooting? It’s compelling, and I’ll give you a firm “yes” or “no” in the full review.

The other interesting combinations are Techart’s own Leica M Autofocus adapter for Sony E mount, which is designed in-house at Techart to stack on the TZE-01. Indeed, Nikon users being able to use this adapter was a big motivation in Techart creating the TZE-01. This adapter means you can autofocus every single manual focus lens, not just Leica M, but anything that adapts to Leica M – M42, Canon FD (and passive EF!), Contax Zeiss, Minolta MD, Olympus OM, you name it.

The other adapter I will be trying in the full review is the Sony A mount range, both for full frame Alpha glass – of which there are some rather nice ones, indeed some of my favourite of all time, and the superbly cinematic Minolta AF range. 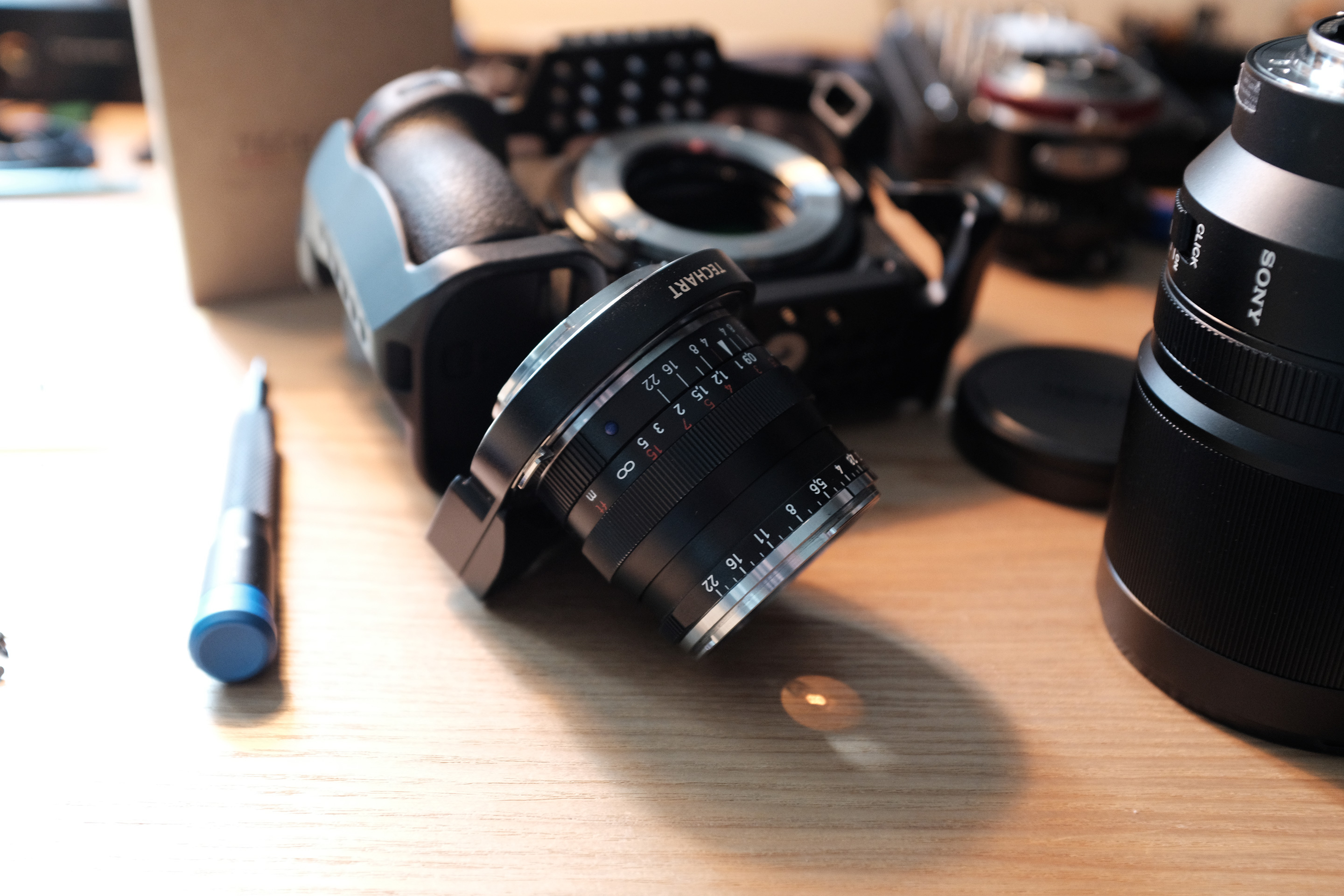 Above: Techart’s autofocusing Leica M mount adapter, with built in motor to shift the entire lens back and forth at ultra quick speeds

Although the adapter itself is just 2mm thin, it has all the electronics to translate between the two mounts built in.

The instructions are in Chinese, and I almost threw away the lens cap! Good job I didn’t!

Future firmware updates will therefore be a possibility to refine and tune performance across a huge range of lenses and stackable adapters.

I also have the Techart Contax G Zeiss adapter (below), for the Contax G2 rangefinder lenses, which will hopefully work on the Nikon Z6 (Update: it doesn’t… Firmware update needed!). Further to that I have the Techart EF autofocus adapter for Fuji GFX mount, which means I can autofocus Sigma ART and Canon L lenses on medium format, also an industry first. So I think it’s safe to say that Techart has been incredibly innovative here. They are becoming one of the best and most important adapter suppliers and designers in the camera industry. 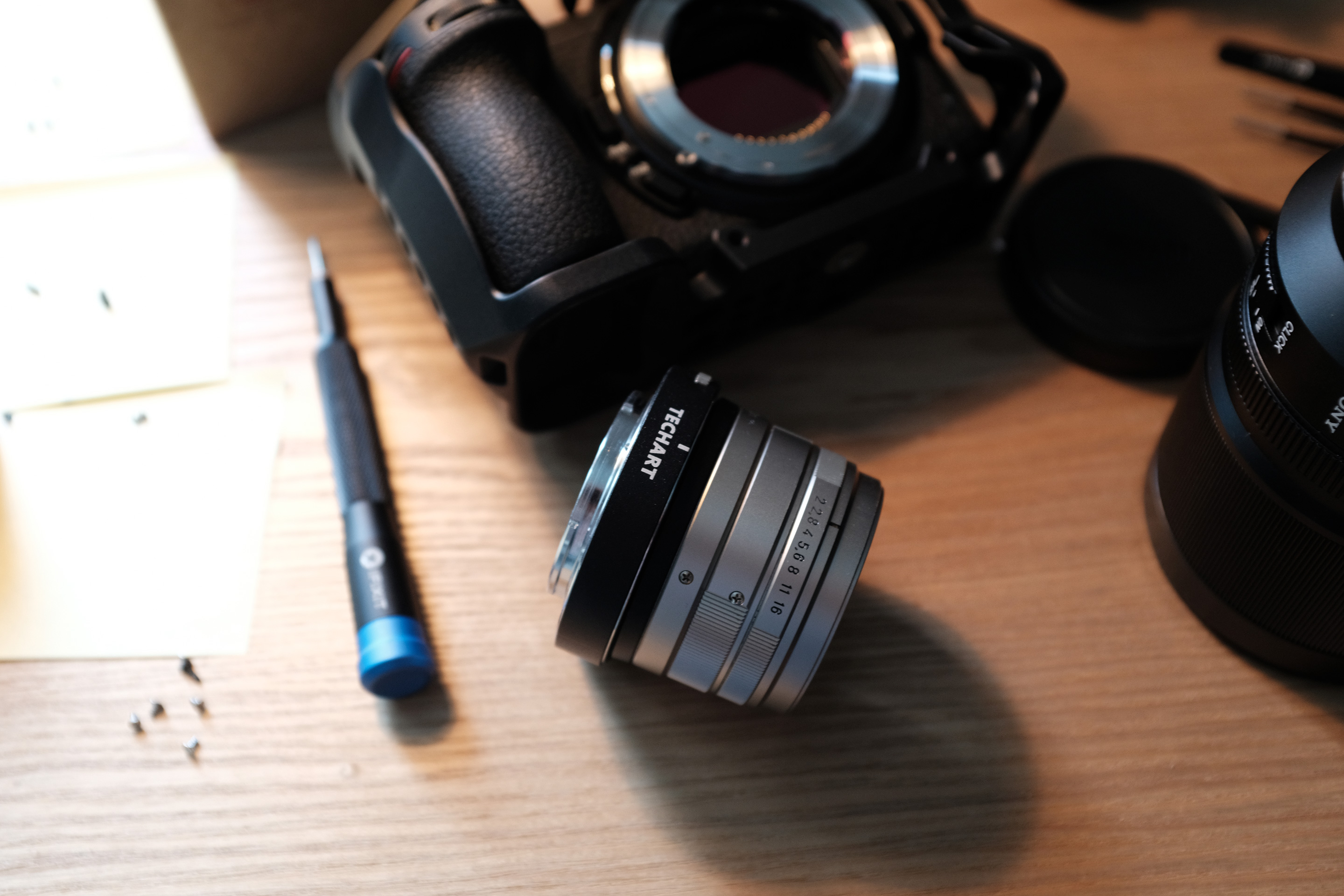 In the review I will of course be comparing the performance of the native Sony E mount lenses to their equivalent Nikon Z native lenses. Of the Z lenses I have the 35mm F1.8, 50mm F1.8 and 24-70mm F4 – all of which cost me far too much money, only for them to be discounted almost to half price just a few months later.

I am disgusted at Nikon for ripping us off over their Z lenses, and early adopters should be entitled to a full refund.

With adapters like this around, the camera manufacturers need to stop seeing their customers as juicy little profit margin generators, and start taking our needs seriously and in a more competitive way. Otherwise, the Chinese are going to have them for breakfast.