Pros are wondering what the benefit of 4K is to them in terms of overall image quality, when mastered and delivered for 2K / 1080p. A lot of work is still shot in 1080p and cameras like the Canon C300 are the workhorses of the moment.

In the case of the GH4 it may appear from the specs that it’s just an 8bit 4:2:0 camera internally.

Actually the theory is 8bit 4:2:0 4K material from this camera can be taken through a workflow in post that converts it to 10bit 4:4:4 1080p – with all the smoother tonality, better colour and workflow advantages that format brings. This is a big leap for 1080p based on the much more expensive C300 which only does 8bit 4:2:2.

First a little bit of background.

Until now mirrorless and DSLR cameras have been limited to 8bit colour depth and 4:2:0 colour sampling with their internal 1080p codecs. This can result in stepped transitions from one shade to another, aliasing, pixilation, digital looking colour and a brittle image that doesn’t grade well. What hasn’t helped is that the sensor output itself skipped out a lot of data, with pixel binning and line skipping. A pixel mixture on the sensor has been an improvement and has been utilised on cameras like the 5D Mark III, Nikon D5200 and Panasonic GM1 but processing power has been an issue in consumer cameras.

Although the GH4 without the external YAGH add-on box does indeed have a 10bit 4:2:2 mode (as shown in the illustration below), this is only available via HDMI to an external recorder – all the internal codec options on the GH4 are 8bit 4:2:0 like the GH3 (although the sensor output to the encoder is 4:2:2) so how do we improve this? 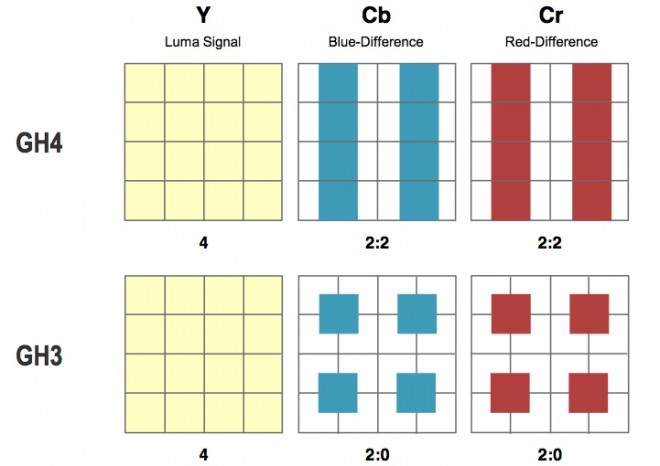 Downscaling and transcoding to ProRes or CineForm at 1080p can convert the RGB 4K data from the GH4’s 4K 100Mbit/s codec to the higher bit depth of 10bit and colour sampling of 4:4:4.

The way this works is quite technical but it essentially amounts to using the extra pixels present in the 4K files to rebuild the lost colour information. Neighbouring pixels are summed to create a super pixel with a greater bit depth and better sampling. It requires a lot of processing power and a finishing codec good enough to store the extra colour data (10bit 4:4:4, with CineForm and ProRes being suitable choices) which is why the camera doesn’t do it internally. It does require a transcoding step in post but the increase in quality over the 8bit internal 1080p codec will be marked. The message is clear. Even if you’re working in 1080p, shoot 4K on the GH4 if you want the best quality.

I’ve been hearing rumours of this for a few weeks but I wanted to get confirmation from somebody who would know.

Here’s the actual discussion with David who was CTO at CineForm, then the company was bought by GoPro (follow on Twitter) – 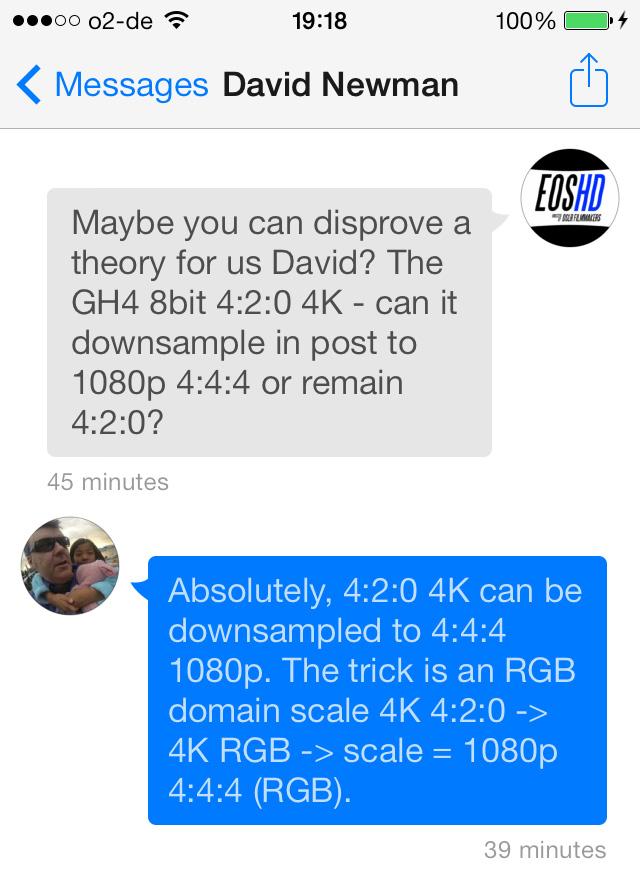 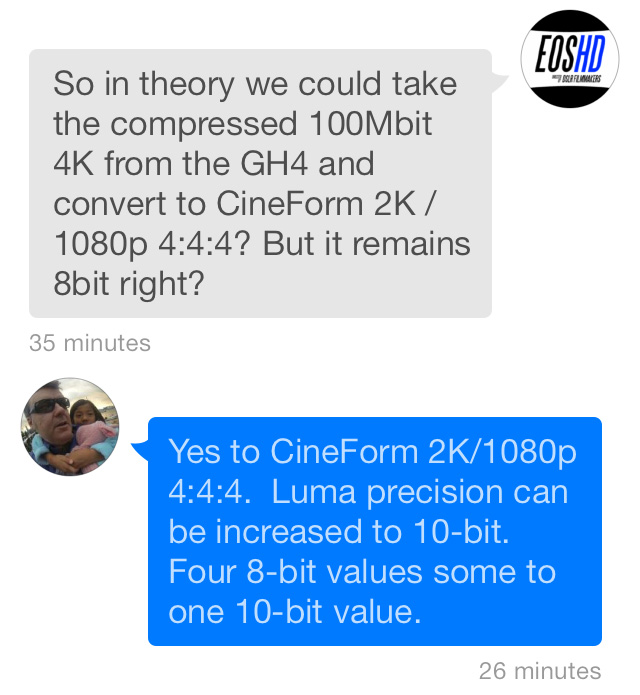 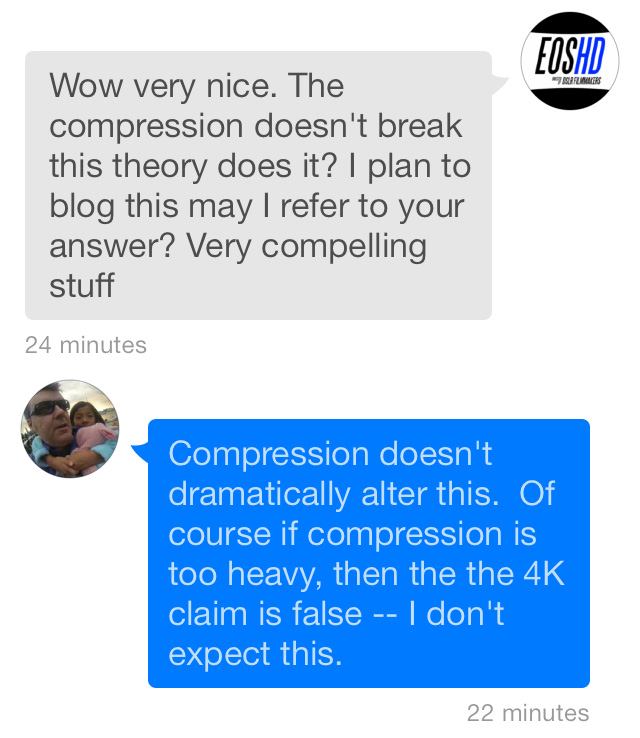 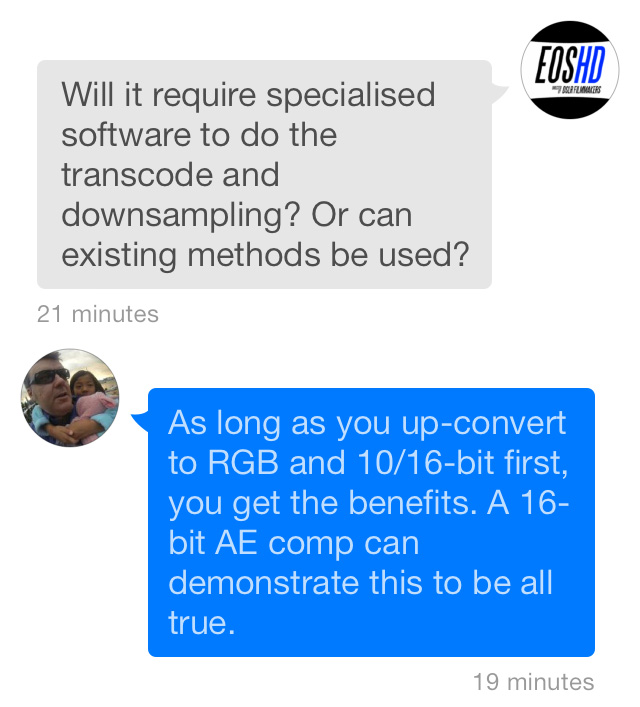 It demonstrates what I have been saying for a while now on EOSHD after my initial scepticism over 4K and whether it’s needed – regardless of whether you notice the extra resolution of 4K in terms of detail you will notice the extra resolution in terms of colour, tonality and even dynamic range especially on DSLRs which suffer the most from 8bit codecs, 4:2:0 sampling and pixel binning rather than a full pixel readout.

This is going to result in absolutely stunning 1080p from the GH4 with the internal 4K codec after post processing.

10bit 4:4:4 is not just an advantage for grading, it’s something you can take to existing 1080p displays, even Vimeo, and still notice – that isn’t affected by how close or far you sit from the display unlike detail at 4K on a 4K TV. The bandwidth between the sensor and the screen is now wider in all respects and that means great colour. So whenever a 4K argument centres on resolution, remember that’s not the whole story.