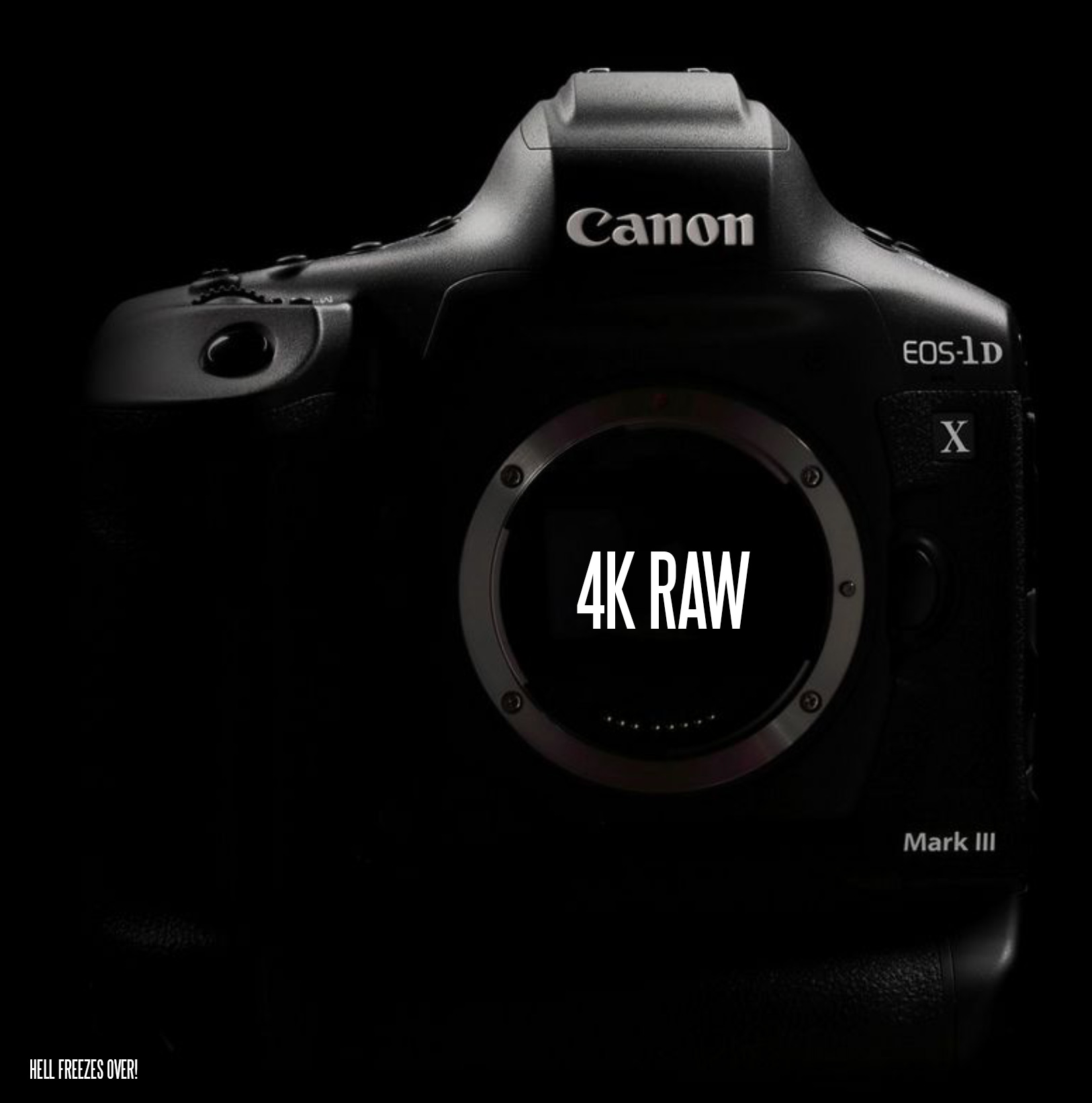 Although you can already shoot full frame 4K RAW on the Sigma Fp for $2000 and full frame 10bit 4:2:2 LOG on the Panasonic S1, if you do have the extra $4000 going spare down the back of the sofa, and need worse ergonomics, fewer features, no EVF and potentially some cropping, the 1D X Mark III might be a tempting choice.

So apart from the unsuited form factor, do Canon have a secret weapon up their sleeve? A unique reason to buy an 1D X Mark III for filmmaking?

Internal RAW codec (Canon RAW) internally to CF Express could be that.

On paper it sounds good. 12bit 4096 x 2160 RAW, with perfect autofocus in a small form factor by cinema camera standards, but no need for an external SSD or recorder.

Although the Panasonic S1H and Nikon Z6 will soon getting 4K full frame RAW recording, it will only be to Atomos recorders.

Amazingly, Canon have done first, what I asked Panasonic to do!

Given how far ahead of the curve Panasonic have been in every respect, it’s a huge surprise Canon have done this with the 1D X Mark III.

When you combine Canon RAW (and 10bit) with Dual Pixel AF, Canon EF lenses, and a big shiny Canon badge on the front I can see why people are excited.

But let’s look at the facts.

The older 1D C and 1D X Mark II shot 8bit 4K MJPEG with a data-rate of 500Mbit. The resulting files sizes were rather impractical.

Canon RAW is DOUBLE that data rate at 1000Mbit/s.

So the practicality issue remains there.

So what about the uncompressed 12bit 4K on the Sigma Fp in Cinema DNG mode?

This is 2000Mbit/s. Even bigger!! However, we are talking about enthusiasts and artists – for short clips and short bursts at the highest quality imaginable, you can use Cinema DNG 4K, or for smaller file sizes to SD card internally drop to 8bit. The media costs are far lower, especially if you are using a 500GB USB C Samsung SSD. The cost of the camera is less than half the 1D X Mark III, so it is open to more people. I fully support the Sigma Fp, over the 1D X Mark III.

On the 1D X Mark III, RAW is a pros-only feature, with the contradiction that most pros value convenience above image quality. Of course there are exceptions and it depends on the project, but most of them just want to get the shot! Who can blame them?

The 1D X Mark III is probably aimed at C200 users – a second body with the same codec.

What WE are interested in at EOSHD goes far beyond that.

It isn’t yet known whether the 1D X Mark III shoots full frame 4K, or from a crop of the sensor like all other full frame 4K Canon DSLRs. It’s a different sensor to the Sigma Fp and Canon-built. They are currently behind Sony when it comes to sensors.

The form factor of a DSLR is looking more and more dated for filmmaking with every year that passes. Mirrorless is where it is at, and here the 1D X Mark III finally gets competitive with a $1500 Fuji X-T3, shooting 4K in 10bit LOG. What is a nice step up for Canon and genuinely appreciated, has become standard practice with their competitors.

Where I feel the 1D X Mark III is indeed better than any mirrorless camera is it’s pro photography credentials. Obviously you can expect flawless autofocus, huge buffer, pro reliability and build, huge battery, amazing low light performance and responsiveness, along with the familiarity of the 1D form factor and EF lens mount.

Well there you have it…

I’d never have thought Canon would do 4K 10bit before Sony on their full frame cameras.

As a 1D X Mark II owner myself, I’m glad the next model finally dumps MJPEG and gives us something to be excited about.

But why buy it over the Panasonic S1 or S1H?

And why overlook the Sigma Fp at such a good price, which will give the same image quality in Cinema DNG, actually maybe even better?

Go ahead, fawn over the Canon badge and the pro stills body.

Don’t say I didn’t warn you… There are smarter choices out there.

The big question for me is – will this be standard policy now from Canon? Has the cripple hammer been put to rest? 10bit video on stills cameras?! Canon RAW on an EOS R?

Or is this one expensive pro camera worth of an attempt to quell the popular argument Canon are behind on their technology?

Interesting that Canon would put 10bit codec in 1D X Mark III, although at $6K it is hardly shaking things up. Maybe it is a sign Canon is starting to wake up? For now, I don't believe that. When they are competitive with Fuji X-T3 at $1500 or GH5 then I will believe it