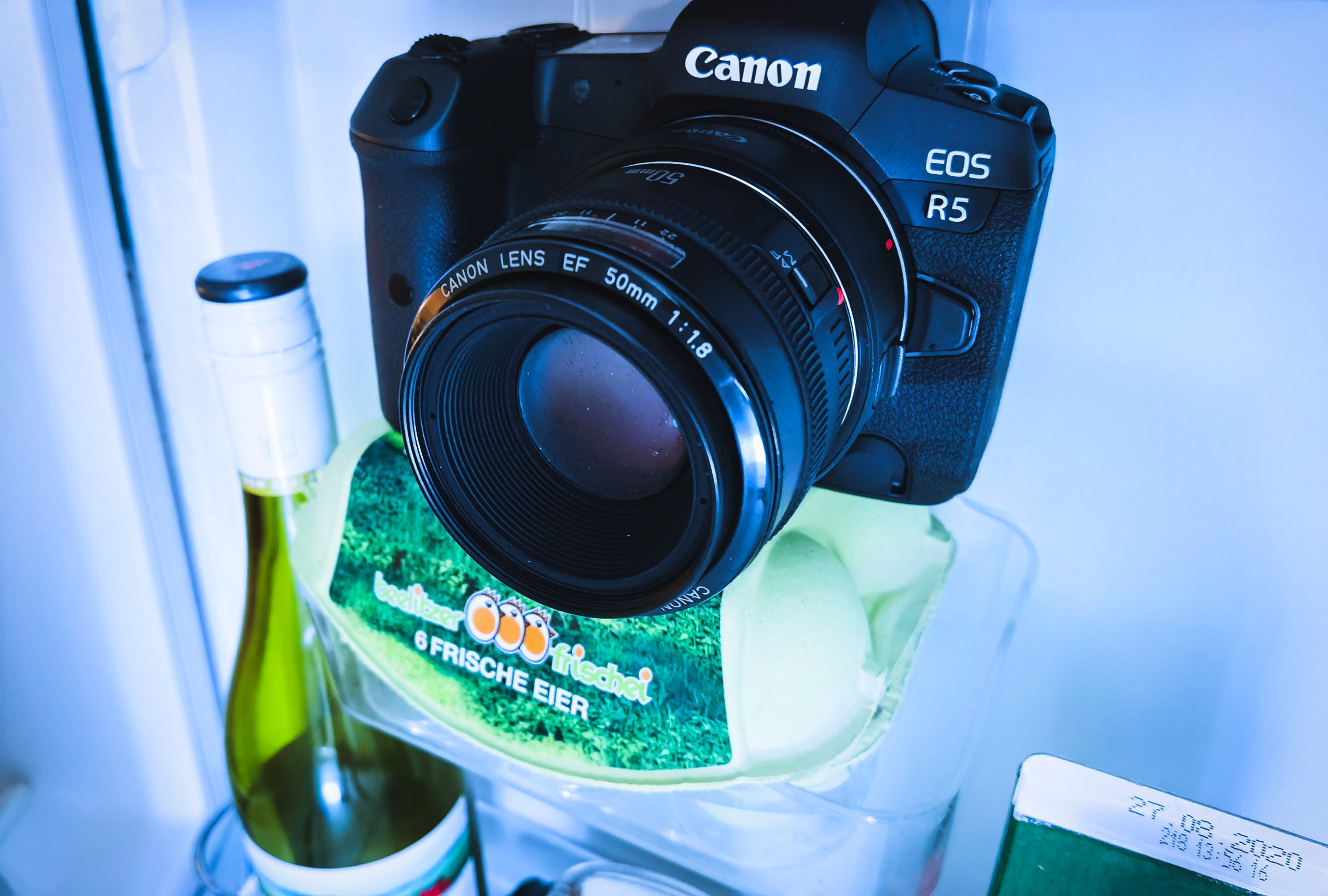 Canon really threw the kitchen sink at the EOS R5 specs sheet. What about the kitchen fridge?

How does the camera perform in much colder conditions?

Is the HQ video temperature limit breached with the camera idle in the Wifi menu in a fridge? How about shooting one photo per minute in a fridge?

Or do the cold temperatures cool the camera body, which Canon says acts as mitigation for any hot components inside?

I set up my EOS R5 on a very leisurely intervalometer taking one JPEG every 60 seconds inside a fridge. Just sixty photos per hour, with no video recording.

The camera’s internal temperature was taken every minute in the fridge from JPEG EXIF data, for 60 minutes (4 °C ambient air temperature), with the camera body exhibiting no warm areas, cold to the touch.

After 30 minutes I very briefly switched into 8K video mode for just 4 seconds, to see how much time remained on the “cripple clock” – then back into stills mode. I repeated this check again after 60 minutes. Overheat control was turned off in the menus, as I find it makes little difference to video mode and shouldn’t be needed in a fridge.

The background is that Canon stand accused of false advertising, artificially crippling performance and lying to customers. This is a serious story and I may go to the small claims court in the UK if they do not explain directly to EOSHD what the rationale behind the camera behaviour is. My allegations are:

There is even a PCB sat on top of the CPU, preventing it from making contact with the casing Canon says acts as heat-sink.

Either way, Canon chose to put an unreliable $4000 camera on the market with impractical limitations, but still expects us to pay top-end prices for the privilege of owning what is in my opinion a defective product.

I have made attempts to get in touch with Canon officially. I even know Michael Bravin in Burbank who works for Canon on the cine side. He has attempted to help and to put me in touch with someone. But we are all still in limbo over it and non the wiser as customers.

I have a made a list of questions from EOSHD readers and EOS R5 owners. Canon do owe their customers an answer on this and it should be a convincingly detailed rebuttal of what we see in the field tests. Like I said above I am prepared as a consumer to go to the UK small claims court, the advertising standards authorities, the BBC and Which magazine if Canon remain unresponsive.

In the meantime, I have been doing some testing with my friend at CDA-TEK, who has developed an EOS R5 temperature monitor / remote control app for Android. This is able to control the camera via Wifi and monitor the thermal management inhibitors via the official Canon API.

These lock you out from various features over time and warn you if stills quality is degraded:

By the way, the camera reports “Video Normal” even if you have reduced time limits in video mode. So you may have 5 minutes of 4K HQ remaining from the initially promised 30 minutes without anything recorded and no temperature warning on the screen.

There are clearly some hidden inhibitors and timing control mechanisms not revealed by the API and the actual temperature in Celsius also appears to be hidden from developers via the API.

Thankfully the camera continuously reports “internal temperature” in the EXIF data of every JPEG like previous DSLRs.

So our intervalometer test is able to report any change over time in internal camera temperatures, which are directly related to increased heating of internal components such as the CPU.

Our Chinese friends at Baidu also used an infrared thermometer on an opened-up camera to determine that the main CPU was the main heat source in the camera rather than the sensor or anything else.

After just 30 stills in the fridge (1 per minute and no video recording whatsoever) the maximum available recording time in 8K video mode fell to 5 minutes from 15 minutes.

After 60 minutes and 60 JPEG images, the overheating warning icon was flashing when I switched to 8K video mode to check. Zero minutes of recording time was available.

The camera then shut down (OVERHEATED! SHUTTING DOWN) in the fridge, even though it was left idle in video mode for around 2 minutes not recording.

The camera was then removed from the fridge.

Let’s take a look at the EXIF temperatures reported inside the camera in the fridge:

Turned on for first time, connected to Wifi app and immediately placed in the fridge after approx. 2 minutes: 29 °C

At all times in the fridge, the camera body remained cold to the touch and the internal temperature monitor shows no increase over time. The camera externally was as cold as a beer bottle and internally far below the temperature it is happy to record 15 minutes continuously in 8K on a hot summer’s day.

Interestingly the “Video normal” status was reported to the Wifi app, throughout the entire stay in the fridge. As you can see the internal temperature remains steady and doesn’t rise at all after the first couple of minutes powered on. In fact it remains 10-12 degrees below the 46C measured in a warm room during a stills shoot, at all times.

The big question is this –

If the EOS R5 is able to shoot 15 minutes of 8K with internal temps showing 46C in a warm room, why can’t it shoot any 8K whatsoever at 33C? In a fridge?

And this is after no video recording whatsoever and just 60 JPEGs.

Even the back of the camera which sits millimetres from the central processor and RAM was cold to the touch with no hot spot. The CFexpress card was also cold to the touch after removing it from the camera. The cripple clock seems to tick down to 0 minutes over the same period of time (60 minutes) just as it does so in a room at 23C, or outside in the blazing hot sun at 35C.