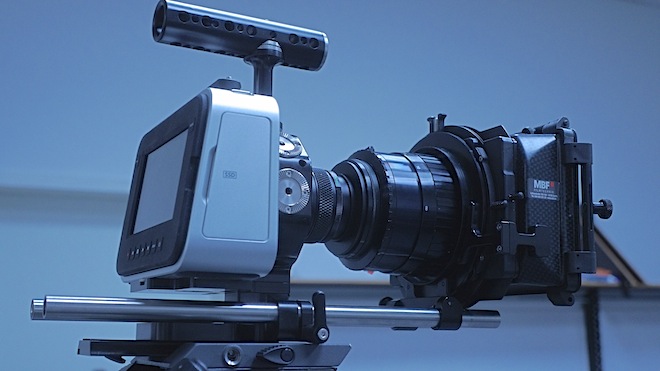 Above: my Blackmagic Cinema camera with ReWo cage – a shootout with the Red Epic is coming soon

BlackmagicUser.net recently did an interview with John Brawley, the cinematographer close to Blackmagic Design and main tester for the cinema camera.

His experience exposing the camera goes along with what I am finding, that the Blackmagic Cinema Camera works best when you ‘expose to the right’.

John recommends setting the zebra function to 100% and not worrying too much about compressed looking skin-tones and banding towards the top of the curve / latitude. Most cameras (even the Alexa) have more tonality in the middle of the curve than at the very top, where the gradation between shades (essential for skin tones and faces) isn’t as smooth.

It is best to explain this with images. The smooth gradation in a cloudy sky is a good place to start.

On the Canon 1D C with the 8bit MJPEG codec if you have a brightly exposed sky and you try and bring that down in post you will end up with banding, weird looking colour and a lack of smooth gradation between shades in the clouds. So the trick with that camera is to underexpose the overall shot to protect the sky or use a filter (think of the ‘Top Gear’ look) – anything that brings those bright shades into the middle of the dynamic range offered by the camera.

Compare the smooth gradation the Blackmagic Cinema Camera does with the sky in this video shot by John on the MFT version of the camera to how the sky looks in Philip Bloom’s first 1D C video below. The 1D C looks poor with heavy banding and magenta tones in the clouds. Despite what Philip says in the video’s description this isn’t a user fault or something which can be worked around – shooting under ISO 400 is the same as pulling an overexposed sky down in post on the Blackmagic Cinema Camera. With the Blackmagic camera you can do so, with the 1D C you can’t.

For me the advice is clear – with an 8bit codec you have to sacrifice dynamic range for colour and tonality, to expose very carefully during the shoot and not to play with the image too much in post or use LOG profiles to try and get more dynamic range at the expense of your colour and gradation.

John says the Blackmagic Cinema Camera seems quite linear with smooth gradation all the way until the highlights clip to white. The advantage of this is that it means you can bring brightly exposed areas down in post and they still look good – with smooth 12bit gradation – yet giving the camera more light will help the shadows. I find that the camera gets noisy towards the blacks and so if you underexpose and bring up the blacks too far in post you will get noise and a loss of subtle grey shades / inky black tones.

“Normally, just about every other camera likes to be underexposed slightly so you protect your highlights.  What you’re doing is trading in some shadow dynamic range for more highlight dynamic range and buying yourself a smoother curve in highlights.  And this is where video can look like… video.  Hard clipping is always a bit ugly in electronic cameras. Forget what you know about exposure with this camera and be prepared to start again.

“The Blackmagic doesn’t respond like any other digital camera I’ve shot with.  Even cameras like the Alexa that have huge DR give you a lot of room to expose and even though you’re not technically clipping, you wouldn’t dare put important information like skin tones in the top part of the curve.  In other words, the camera hasn’t technically clipped, but it will struggle to reproduce nice looking colour and skin tone at those higher exposure levels. It’s not overexposed, but it’s kind of only good for non-critical highlight detail.

“The BMCC doesn’t respond this way.  It seems to me that you can expose right up until very near clipping and the response is still very linear.  It’s like you can use more of the cameras dynamic range.  So what I tend to do is give the camera a lot of light by exposing it to the right.”

I find that extreme over exposure leads to noise in the highlights, very unusual for a digital format. That is very much like the way film emulsion reacts when pushed too far. But the camera has so much latitude you really have to mess up the exposure for this to happen. What John is suggesting here is simply to push the exposure a bit to the right on the imaginary exposure meter.

Of course the only time you can’t overexpose is when the available light isn’t enough, then you will have to dig deeper into the shadows. I’d say the shadows are clean to about ISO 1600 so as long as you rate the different areas of a scene higher than that with your light meter you will be OK.

Another thing I do with the camera is to never change the ISO in-camera. I always have it set to ISO 800 and the monitor still gives me a good idea of exposure in a wide variety of light conditions.

A word of warning – I am spending a huge amount of time in post with this camera, by choice. It really does invite you to play so much with the image and this adds a lot of time to the editing process if you let it.

“Don’t underestimate the amount of time required to grade and get the most from this camera. If you want good pictures then you’re going to be spending a lot of time in your DNG processing application and if you don’t have the patience to learn how to grade then this is not your camera.  If you want to shoot and deliver right away then go get a C100 or an FS Sony.”

Of course you can just shoot ProRes and not change it from the in-camera video Rec.709 but the optimal results are definitely to be had with a dash of creativity in DaVinci Resolve.

Finally, here’s what John had to say on the Micro Four Thirds version of the camera:

“I have I’ve been enjoying the M4/3 stills lenses a lot, the 12mm T1.6 SLR Magic and the Voigtlander 17.5mm T0.96.  I have also really liked using the Leica R mount stills lenses. They have great lens personality and I like using the camera naked with them (no rig).  I can pull focus myself off the barrel and it gives me a very intimate way of working.”

Overall I am a huge fan of the image from this camera. Once you go this close to a true film look it is very hard to go back to even the best 8bit compressed 1080p camera such as the C300. Here is a teaser of my Blackmagic Cinema Camera versus Red Epic shootout I am going to blog soon on EOSHD. Stay tuned for this one. 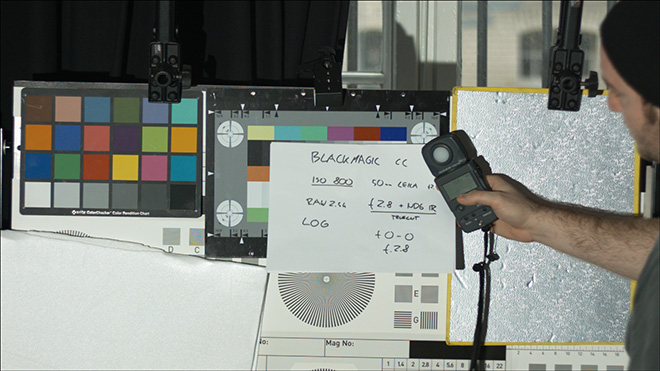 Above: Philip of ReWo at the Blackmagic vs Epic shootout