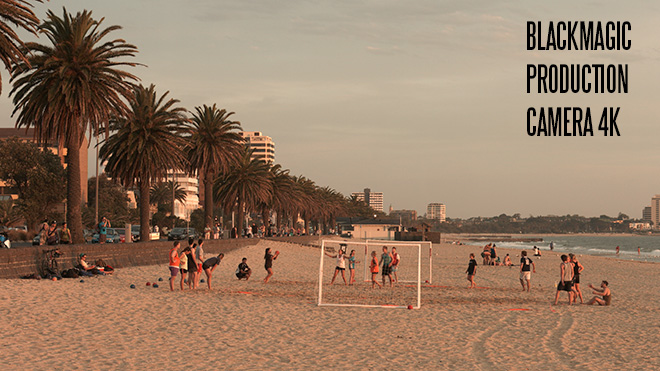 The first 4K images are rolling off the 4K production camera, shot by Grant Petty himself no less. I’m hugely impressed with the image. It breaks new ground for resolution for an accessibly priced movie camera.

The download is absolutely huge at 9GB. If you just want a glance at what’s on offer, you’re in luck because I’m going to guide you through the images now and do some frame grabs.

Shot in the beautiful city of Melbourne (I have been once and yes it really is that photogenic – definitely on my to-shoot list for next year), the Blackmagic CEO has been out and about with the camera, taking some actually quite attractively shot footage! I say he has talent… Grant you are in the wrong job making cameras, you should be shooting with them more!! Can you imagine the boss of Canon affording us the same privilege? A lot of CEOs may claim they are hands-on with their own products but they’re not really. So this is a nice gesture here from Grant.

These were shot in ProRes. Remember this footage is all shot with a global shutter, which is a unique feature for $4k. The only other cinema camera which currently offers this is the Sony F55 and of course that is a lot more than $4k! 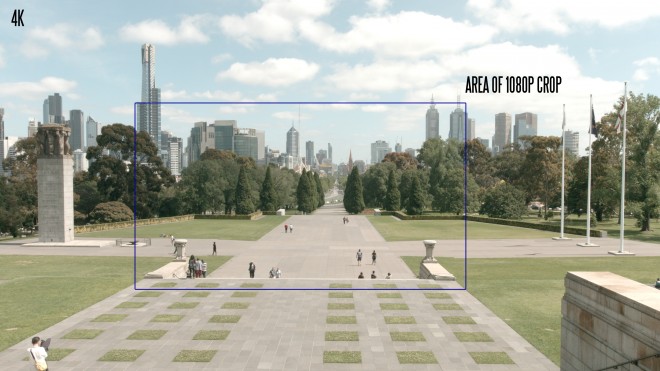 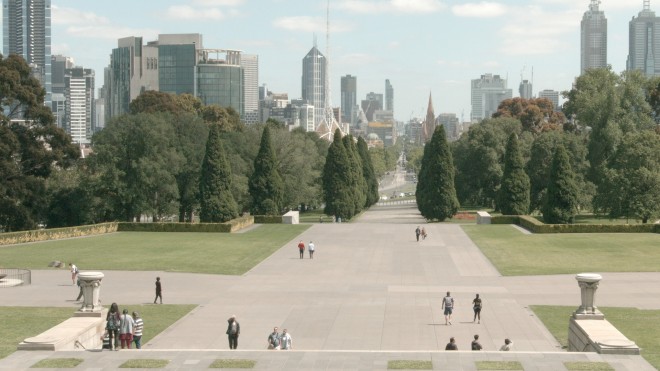 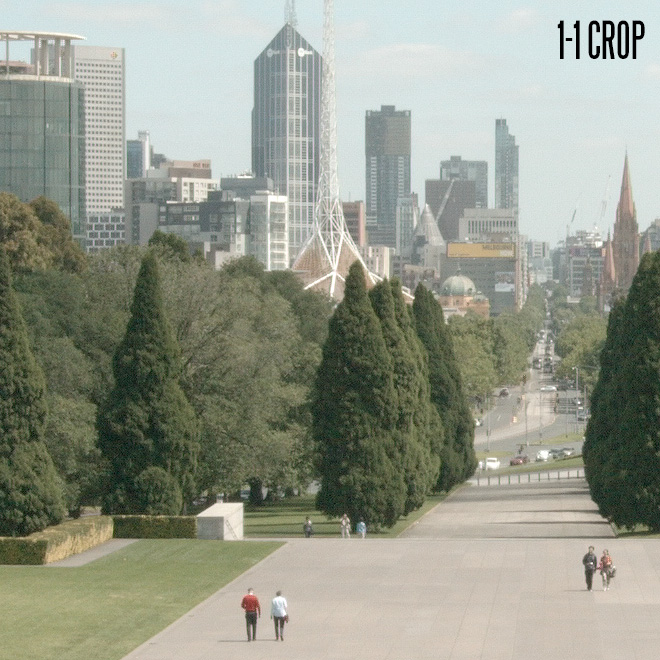 Even by RED and general 4K standards it is resolving incredibly well, and cleanly too. Very little in the way of false colour. As for moire and aliasing I can’t see any, though it’s early days to be ruling stuff like that out. The main concern is noise, it has a slightly gritty texture to the shadows but that’s something you can’t crush back a bit in the grade to hide – and it’s debatable whether at normal viewing distances even on a large 4K display you will notice stuff like that.

Here are some more shots by Grant. Check out the detail in the wooden pier panelling here… 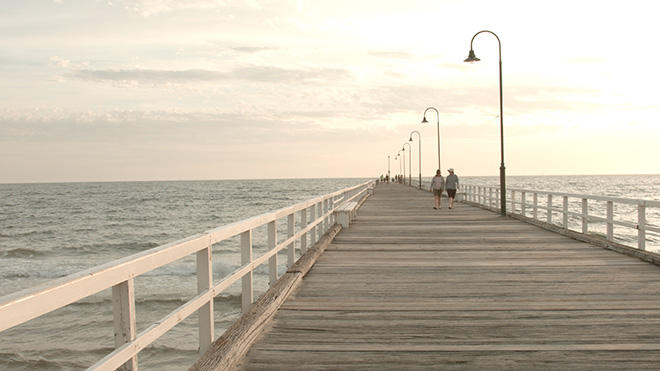 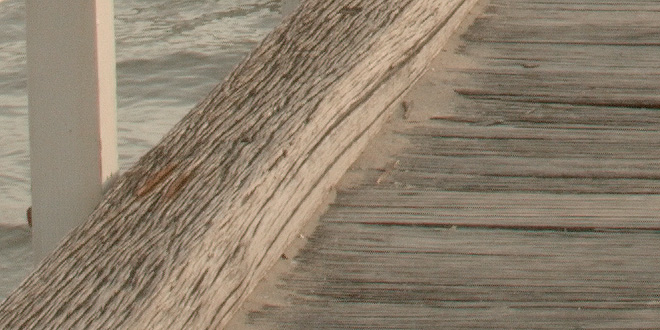 Grant has also shot some low light scenes with the camera. Now I believe the native ISO of this camera is very low (around 400). Here’s what he had to say about that…

“This camera is not a low light camera, however I have included some clips at night so you can see that. I spent a few weeks wandering around with the camera taking some different types of shots. One shot of the jetty has some clipping in the sky to see the affect of clipping. All the shots are ProRes as I did not shoot RAW. I did notice that later when the guys did some more tests on the camera and lens that it was not shimmed correctly so I think the results could be better than this. Some of the shots have different shutter angles and I used standard still camera lenses.”

If you’ve downloaded the footage and run the low light clips through Resolve you will find that they’re not actually too bad. Noise is kept at a reasonable limit, but I don’t know what circumstances these were shot at – what ISO, what aperture, and just how dark those Melbourne streets were. 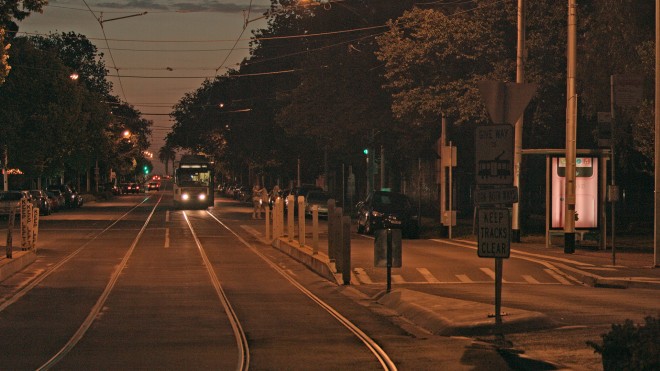 I am sure you could clean this up quite nicely and still have a lot of detail left over from the 4K original.

The noise grain (from the original ungraded frame) is nice and fine, quite filmic… 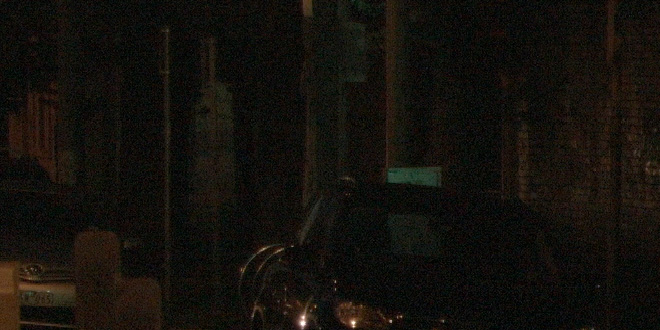 That bodes well for the ProRes on this camera, which seems to maintain a very nice texture and detail to it despite the compression.

Grant says the camera is now finished and only the final testing procedures stand between it and shipping. It would therefore be reasonable to expect that the first units will ship to customers after Christmas and not before.

“As I have mentioned previously we have been working hard on redesigning part of the camera due to differences in the production sensors to what we experienced in the early camera builds, however that work is completed now and we are in final testing.”

One thing is more certain. 2014 is the year of 4K. There’s a great many cameras due on the market before April.

I’m really excited, but if you’re thinking of making the jump, do be aware that 4K can be extremely challenging to shoot with. There’s the storage requirements and processing power necessary to handle the resolution – but the main challenge I think is actually focussing the image properly. If you are off by a tiny tiny amount it will be noticeable on a 4K camera. It’s actually surprising how much you can get away with on a mushy 1080p DSLR. On the Production Camera the focus plain will teem with detail – which only goes to highlight the difference between the part of the image which is slightly softer due to a slight focus miss (but still resolving higher than 1080p). Infinity focus will also be very critical to get right on this camera. Blackmagic had a few challenges getting infinity on all the EF lenses (notably the Tokina 11-16mm F2.8) on the BMCC so they really must make sure the mount on the 4K model is shimmed perfectly.

But for those up for the challenge of going 4K in 2014 it’s going to be very exciting.

Download the 9GB file from the official Blackmagic Design Forum