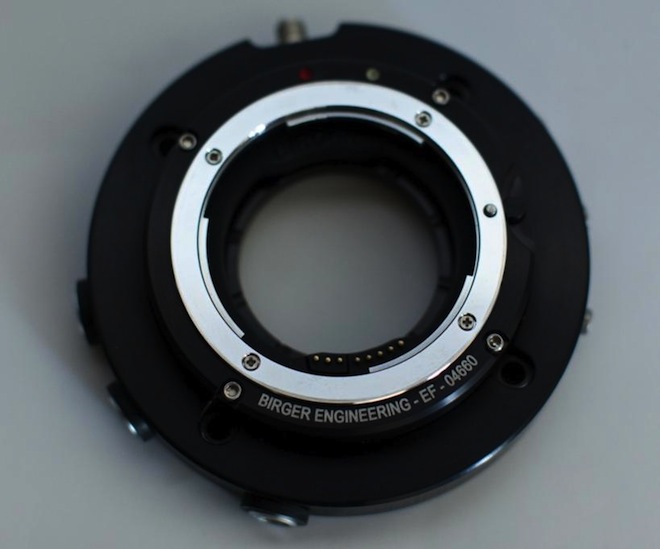 I have just been in touch with Birger Engineering, who are developing the first ever Canon lens adapter for the AF100, with full support for AF, aperture control on the camera body, and optical image stabilisation (IS).

The powered adapter will feed off the Micro 4/3rds lens mount and control Canon EF mount lenses via the appropriate electrical protocols and contacts.

I asked Birger if support for other Micro 4/3rds cameras, like the GH2 would be provided.

Birger say the relatively low capacity battery (and single cell) in the consumer Lumix cameras is an issue and that external power may be needed for the adapter, but that the adapter will be fully compatible with the GH1 and GH2.

If external power is required, Birger will supply the appropriate cabling upon release.

It’s not going to be determined until the final version is developed, but I hope they can indeed get enough power out of the GH2’s lens mount to make it work without the external power cells.

The adapter will be fantastic for Canon L glass owners, and even for consumers more interested in stills – who need good AF and stabilisation.

Birger will have pre-production units ready for around February, though release dates etc. are not yet set in stone and are subject to change.

What I’d also like to see going forwards is a high quality optical reducer for full frame glass, to overcome the crop factor of the Micro 4/3rds sensor, so that a 24mm F1.4 would actually give a nice wide field of view on the GH2 and AF100. There would probably be a slight loss of light and / or sharpness but it would be interesting to see how good such an adapter could be made.