Kinefinity are at BIRTV in Shanghai this week. Dan Chung has been there to speak to Kinefinity and the European dealer HD Videoshop now have more details on the MINI upgrades in the pipeline.

KineDeck supports a recording resolution up to 6K and CineForm RAW. 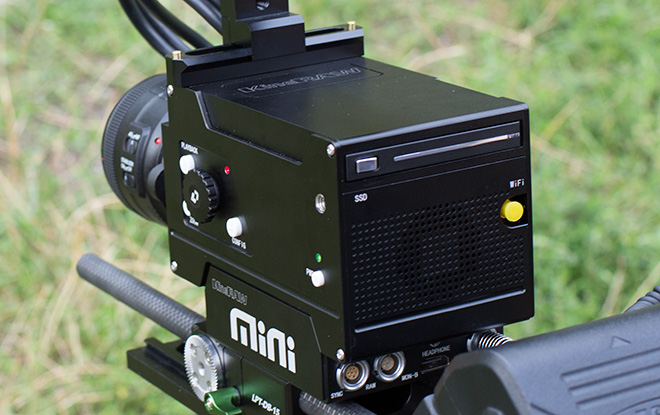 The port is included in the most complete package but can be added to any MINI body as an optional extra for 279 euro + tax. You must specify it at the time of ordering though. The body only is 3199 euros + VAT.

The MINI’s 4K sensor makes a 2K crop mode possible and that will come in firmware update. That’s great news. There’s also a BNC mount for the MINI. I’d love to see a Micro Four Thirds one.

720p slow-mo at 100fps is already in the current firmware. For NTSC users I am told it will be 96fps. Here it is in action –

KineSTATION has been announced, this is software which can convert Cinema DNG to Cineform RAW in post at high speed. Available immediately for Windows and end of September 2013 for Mac.

KineGRIP with have additional controls for aperture and shutter has also been announced. Cleverly the grip features a built in 21Wh battery. This will be available end of September 2013 for 349 euros + tax. Additionally at the end of September Movcam will provide KineKIT – a LWS dovetail plate, top handle and 15mm rods for 389 euros + vat.