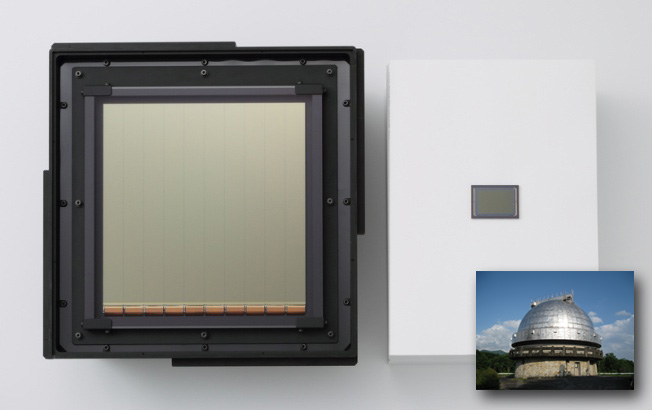 The huge Canon CMOS revealed last year wasn’t just a marketing or R&D ploy after all, it has been put to practical use. The sensor does extraordinary low light 60fps video (no word on resolution) of the night sky at the Schmidt telescope in Tokyo.

Minimum illumination is around 0.3 lux, half the brightness of moonlight. Despite having 40x the real estate of the 5D Mark II’s full frame sensor it is not jammed packed with megapixels. Reports are vague on technical aspects but it has been suggested the chip has a resolution as low as 1 megapixel, and that the photo-sites are huge in order to capture as much light as possible with high shutter speeds. Another reason for the low resolution is that it would be impossible to do 60fps video from such a large sensor otherwise with current technology.

The scientific purpose of Canon’s sensor at Kiso is as a meteor and space debris detector. The low light abilities of the sensor allow it to capture the faintest trace of meteor moving across the night sky.

The Kiso sensor was installed back in January and is only now operational. The first results are due in a few days and will be presented on the University of Tokyo campus.

The 200mm x 200mm sensor is the largest in the world and was produced from a 300mm wafer. In actual fact all DSLR CMOS sensors are cut from large wafers like this but you get lower yields than the whole surface area. Computer CPUs are manufactured in a similar way.