Warning – this video contains content some viewers may find disturbing. Not suitable for work.

One of the best looking trailers I’ve seen on Vimeo from anyone has been for a tense Spanish thriller called Musgo. It now appears the feature length film itself could as thrilling as many were expecting.

Above: the famous original trailer

Musgo is by director Gami Orbegoso and is shot on the GH2.

As with Lars Von Trier he prefers to operate the camera himself and shoot in a very small unit. From what I’ve seen of his work so far he has an absolute knack of lighting, composing and grading scenes to evoke classic cinema. Edgy, cold and raw at the same time as being silky smooth and beautifully shot. It is a real classic silver screen look he’s gone for with the GH2 and I love it. The grading brings the whites right down and crushes the blacks. Interesting and quite against current trends of super white and lots of shadow detail. Here’s the basis of Gami’s camera setup on Musgo:

The audio is also superb in Gami’s work and this is as important as the image. I recommend full screening the clips as they stream in full 1080p and putting a decent set of headphones on. The atmosphere simply wraps itself around you and involves you in the film. To come in cold with all the distractions of the web, start streaming this clip and to get immersed in the story after only a few seconds shows a real filmmaking skill – what a talent to be blessed with in this age of fly like attention spans.

Here’s some behind the scenes shots 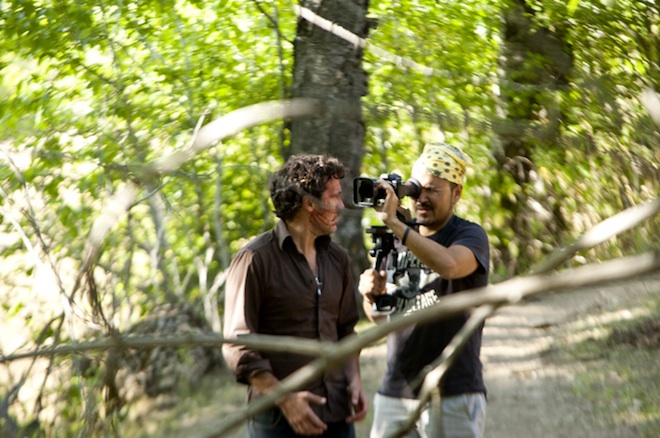 Unlike a lot of the light and fluffy attention seeking gimmicks around today which are more like adverts than cinema, Musgo has balls. It has depth, craft, talent by the bucketload, refreshingly shocking images, a European grindhouse style. Overall I am incredibly impressed with Gami’s filmmaking and I’ll be avidly following his next steps.

Here’s another example of Gami’s work, a test scene for his new film.

The real test of filmmaking skill

It goes without saying that the scenes here represent a far more realistic test of the camera and the skill of the cinematographer than the Zacuto studio scene in the shootout, I’d love to see Steve, Jens and crew take their popular concept forward for next year. Let’s mix things up and get away from the plastic TV soap look.

Sam Morgan Moore says a fairer test of both skill and camera would be to have as follows… A real outdoor location shoot in the sun at midday with NDs and the lens stopped right down. A second scene outdoors but at night under street lights using the bare minimum of supplementary crew and equipment. An interior shot with a window and a massive interior real-world location like a ballroom or grand mansion (think The Shining). It would be great to go off and hire a real world location and let filmmakers loose on it, with their chosen camera and a limited spend on gear so that nobody could just throw money at their creation to make it sing. This would be a more realistic test. As we all know too well, a real shoot has a finite budget and the prioritising of resources. All the ‘cheap’ cameras got similar treatment in the shootout, and that is not cheap cinema. If you were doing a job where shooting raw on a $3000 Blackmagic Cinema Camera allowed you to use less powerful (and cheaper) lights and fewer of them, because you could do so much adjustment in post, then the $3000 camera would be significantly cheaper to shoot with than the $700 one overall.

Much as I enjoyed Part 2 I think there’s a contradiction in Zacuto’s message and how the shootout is executed. Although the mantra is ‘the gear doesn’t matter, talent does’ the amount of lighting gear, rigging used in the shootout, not to mention the Fujion cine zooms, monitors, follow focus, props and post production suit is not exactly screaming “Hey! Gear doesn’t matter!”

In the Zacuto shootout Den Lennie filled with a ‘400 Watt Joker‘ costing $4700 and yet produced a shot (I) which looked dull and didn’t suit the party atmosphere of the scene. But so what? In a real world test, or going for a natural look, or shooting a live event – all that would have been a proper test for Den, Mick and crew. Far more variables. I really should do a comparison video shot in the real world between the GH2 and FS100 – they’re so close in image quality. Lets not take anything away for the fact than when you buy a GH2 for $700 you are really getting the image quality of a $5000 camera – some might say even a $15,000 one.

The crew of Musgo used the GH2 as a modular picture making box, stripped away the complexity, added the essentials (good lenses and ND filter for example) and concentrated on the content. I love that raw approach to the art of filmmaking.