Andrew asked me to write a brief article for EOSHD about the experience of making my feature film, Mandorla, now in post, with a pair of GH2s and LOMO anamorphic lenses. I’m happy to do so because, truth is, it’s Andrew and the EOSHD community that inspired me to go the GH2-anamorphic route, which achieved a cinematic look and vibe that I never thought possible for a low-budget indie feature.

Naturally, any feature film is a massive undertaking with many important facets. Here’s a brief look at two of them that were critical for us to get right: cameras and lenses. 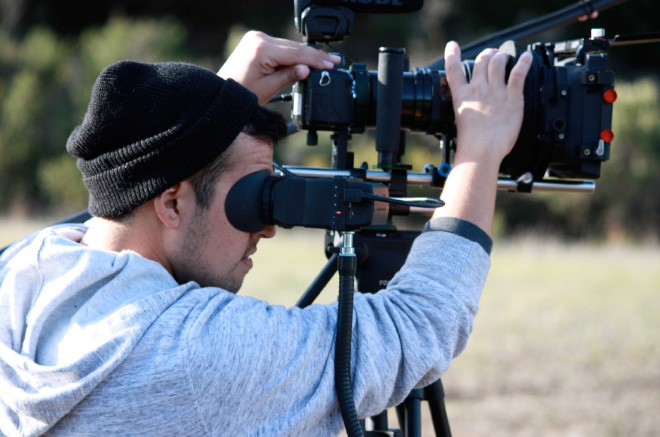 Camera operator Fernando Cisternas with a GH2 mounted with a 35mm LOMO roundfront and Cineroid EVF.

Whoever at Panasonic allowed the GH2 sensor to be sharper than their more professional AF100, which costs several orders of magnitude more, has my heartfelt thanks. (I hope he wasn’t fired.) It allowed me to have two camera rigs instead of one, which is important for an efficient production.

I think our first test shot in France provides a useful picture of how we used the cameras throughout the production. It was with a stock GH2 that Andrew procured from Japan, fitted with a Hot Rod Camera Micro 4/3 to PL lens mount adapter (thanks to Illya Friedman), and a 75mm LOMO roundfront that had just arrived as part of a set from a rental house in Denmark. 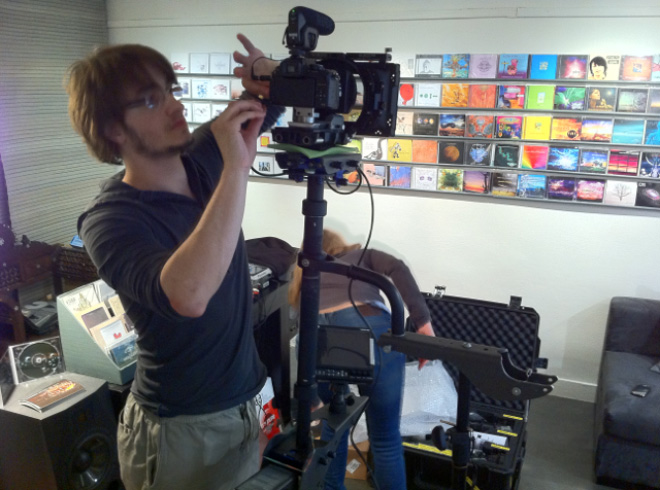 This “test” for the camera and lens was also an audition for a young steadicam operator, Remy. I rigged up the camera and lens, adding rods and an O’Conner Matte Box WS with a Schneider polarizer. We then went out into the wonderfully flat afternoon light in the narrow street of Rue Mazzard in Lyon, where I put our First Assistant Director, Alice, two meters in front of the camera. After setting the aperture to the reported LOMO sweet spot of F5.6, I told Alice to imagine she was going to meet an old friend for a drink as she strolled down the street. After a couple takes we wrapped, de-rigged, and went to the friendly bar around the corner, La Boule, where I connected the GH2’s HDMI cable into the bar’s flat screen TV. We watched the first take and I knew right then that the look of the footage was what I had been striving for it seems my entire life. A vintage cinematic look reminiscent, to me, of Panavision films in the 70’s and 80s. Here is that test:

We used two GH2 so we could shoot two types of shots in one setup. Often this was a wide “master” shot framing two actors with one camera, while the other camera was used for a close-up on one actor. This helped us get our shots in a timely manner, which is important when your primary lighting source is the sun.

We always shot in manual cinema mode, 24P, settings at -2 contrast, -2 sharpness, -1 saturation, 0 noise reduction. After the “stock” shoot in France the GH2 hack revolution took off in full swing. We then used a stable 132mb Driftwood hack for the home-based California production that our DIT/Key Grip guy, Jesus “Chuy” Valadez, an avid EOSHD reader in Oakland, found. For time-lapse shots, or anything running longer than 5 min, Chuy often switched us back to stock, or we would later concatenate the files when he ran 2 hours of DIT at the end of our 10 or 12 hour production days. It cannot be overstated how important it is to manage the cards and files you shoot, logging and backing them up at the end of every production day. A lot more can be said for having people like Chuy and our main camera operator, Fernando Cisternas, who would follow creative directions to the Gates of Hell and back. 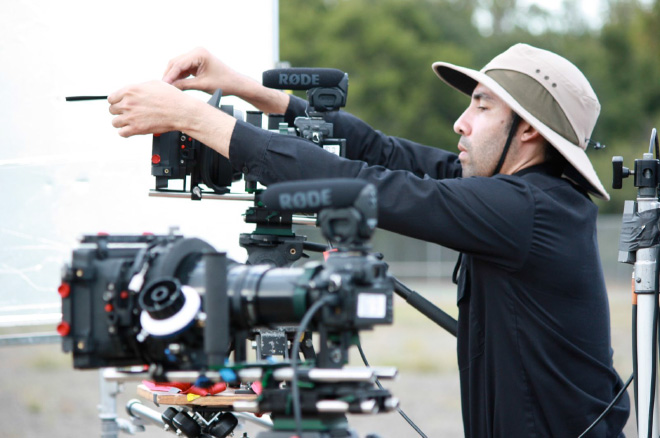 Setting up a two-camera shot, DIT, Key Grip, and 2nd Camera Operator Jesus “Chuy” Valadez installs a flap as the sun sinks lower on the horizon.

Obviously, when you think about it, every image in a film passes through the unique character of a lens. There is a special, epic-like magic in the cinematic distortion that anamorphic lenses create. Andrew wrote extensively about this on EOSHD and posted compelling videos with his GH1 with an OCT18 mount 35mm LOMO squarefront. His articles drove home the point about vintage Russian character in that lens, which was used to great poetic effect by Andre Tarkovsky. 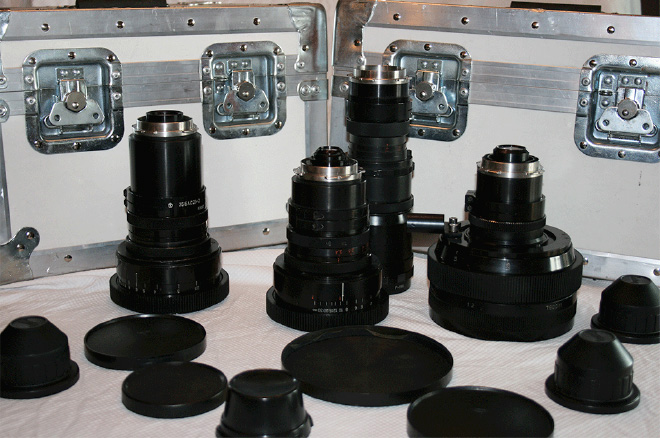 Coming back from France to form a longer production in California, I knew we could not afford the few LOMO round front lenses available to rent for weeks on end, or get them back for quick pick-up shots. As luck would have it (and you need a lot of luck when making a feature) I came upon a blog posting by fellow GH2 LOMO enthusiast Edwin Lee in Hong Kong pointing to an unimaginable listing just posted on eBay, a full set of pristine LOMO roundfront PL mount lenses: 35mm, 50mm, 75mm and, to my surprise, a 150mm.

I knew I could not afford the lenses on my own. So imagine the conversation when I went to my producer, Liz Holdship, and passionately explained that we had to spend what would likely be 30% of our production budget to buy these lenses. She said yes, and I entered a white knuckle bidding race on eBay to win the lenses for our production. In retrospect, we all agree it was the best decision. A lens set with the same vintage anamorphic character has, I believe, allowed me to paint a more coherent emotional palette, from extreme close-ups to landscape long shots. 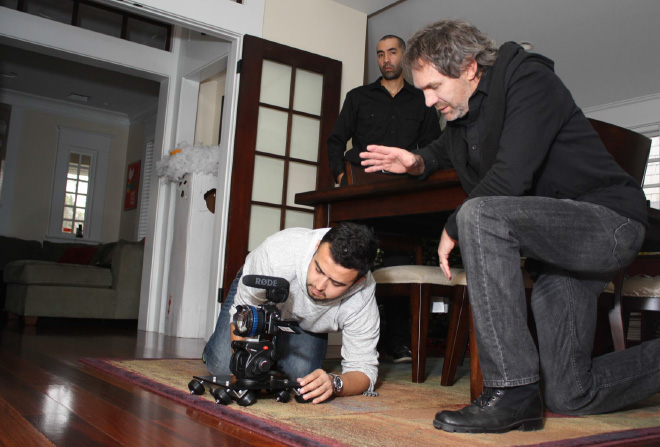 Lining up a 10mm LOMO shot.

One drawback on anamorphic lenses is that they usually can’t focus on anything closer than 1 meter, or capture places like a pancake lens can. To address this I found a LOMO 10mm on eBay. Although non-anamorphic, it has the same vintage character and could capture any space we were in, everything in focus from 6 inches to infinity, and rectilinear. Amazing lens. Looks like HAL’s eye in 2001.

Obviously, cameras and lenses are part of the critical tools that bring a story to life on the screen. At the end of the day, filmmaking is all about storytelling and emotion. Andrew’s blog, Anamorphic Shooters Guide, and the EOSHD community have inspired, informed, and enabled so many of us, who cannot afford the traditional trade routes of filmmaking, to find a way to make our own films. 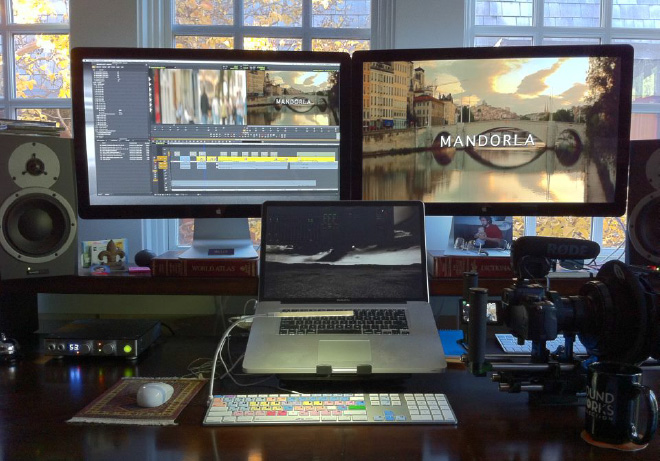 On Mandorla we are now deep in post and are aiming to have it out at film festivals later this summer and fall. I hope to see you at a screening. Meanwhile, you can follow our progress on our blog or Facebook page.