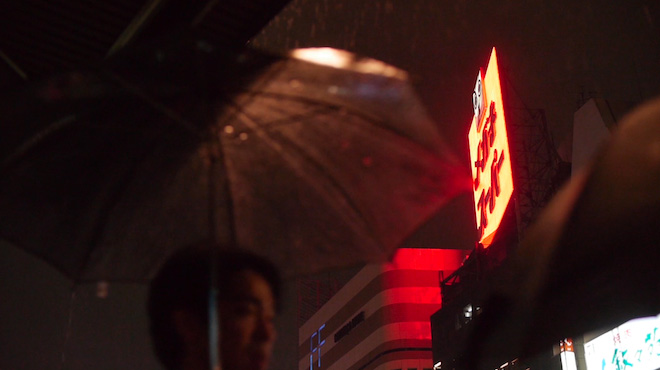 Imagine if every photo was lit using a flash gun, well the same goes for cinematic scenes. Often some of the most interesting and varied light is already right in front of you. Not everything has to be studio light rig based.

I don’t think of ‘lighting a scene’ as always directly controlled, often it is wild. Lighting you can control is only half of the cinematographer’s job and so many films make use of the sun as a key light. Terrence Malick has based a career on magic hour light!

The world of natural light is expansive and varied. As someone who has chased light a lot with DSLRs, and avoided the expense, power requirements and weight of having to carry lights around with me, here are some of my tips for a successful natural light shoot.

Light gives texture and shape to your subject – it prevents a scene from looking two dimensional and flat.

It helps to give form to often shapeless scenes.

Had I shot this landscape in the mid-afternoon sun, none of the shadows and backlit trees would have carved out the form and shape I wanted. 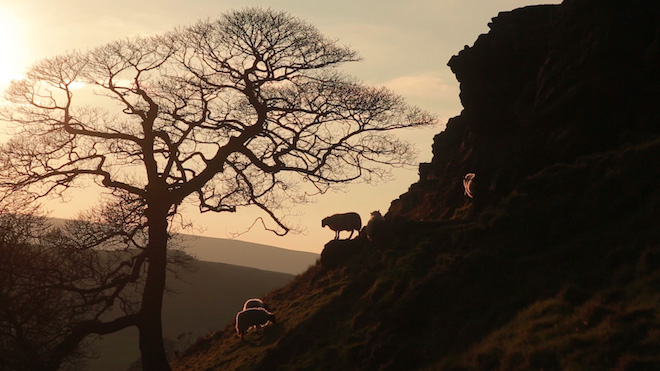 This is because when a light source is lower down it essentuates depth, highlighting the differences between objects close and far. The light rarely falls the same over everything all the way to the horizon if it is coming from a low angle. If you’re shooting with the sun at a high angle like at the height of summer at 1pm, you will get a very flat look compared to shooting during the Spring at 6pm.

The shot above has 3 distinct layers. The hills in the background – one hazy bar, one stronger in tone. The landscape immediately in front of the camera – almost silhouetted, but the fur of the sheep illuminated so they don’t blend into the scene. Your actors are sheep too. In fact Hitchcock went so far as to call them cattle! 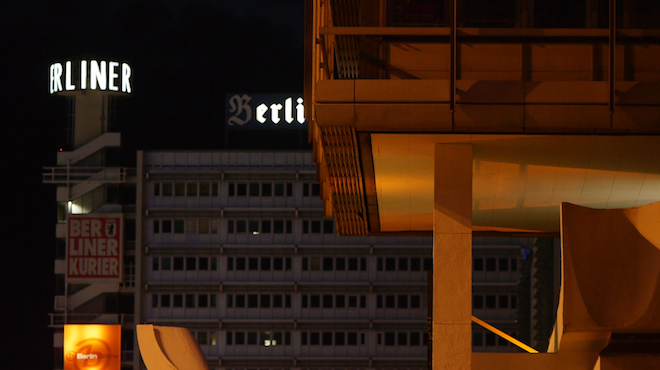 The layering and 3D perspective does not just come from the sun (or if you are feeling really lucky, the moon at ISO 12,800 on a C300). Here’s another example of giving perspective with natural light – this time urban lighting. This shot is not just down to the lighting and me recognising it in my head whilst on foot. The sensitivity of the camera played a great role in capturing this shot – the building in the foreground was lit by a rotating ad banner 50m away. I was using an aperture of F0.95! None of this would have been possible pre-DSLR revolution. If ever you needed a magic bullet, that’s one. 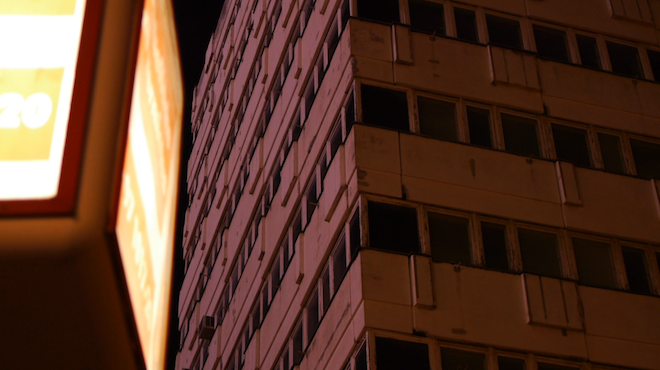 Here’s the ad sign in question which gave the building in the first shot (in the foreground) the orange glow. Now in this shot, the building present in the right two thirds wasn’t lit by the main light in the frame, but by a fill light provided from 50m away – yes you guessed it – a giant ad banner on the side of a building opposite which was changing colour from red to blue. No way would you be able to light like this in the days of film. You’d have had to set up an Arri generator outside the building and seek permission for the city hall before blasting megawatts of light at it. A DSLR not only costs $700 but it liberates you from having to deal with city administrators and spending $100,000 on a lighting rig. You just have to seek out the right location at the right time.

By selecting carefully, you are controlling the uncontrollable.

The temperture of the light also differs depending on the angle of the sun (read time of day), the season and even the country. I’ve found that in Australia you get an incredibly warm tone of sunlight at magic hour. In the northern hemisphere, it is usually much cooler. The only time it appears ruby red in the north of England is when the sky lights up during a particularly intense sunset. But all year round, you have that optimal window where sunlight is at its most dramatic and shadows the longest.

At dawn I find light to have a cooler blueish green tone. In the evening, it is warmer. Anyone can observe this, and as a cinematographer it helps to be in touch with what nature offers you. I advise anyone to spend a week away from their cell phones and desks, just appreciating the sights in the wilderness and observing what the light is like at different times of the day between 4am and 10pm. I found the light in the morning, around 4am in Taiwan absolutely spellbinding. A mixture of purple clouds, jade shadows, teal blue skies and opal haze. 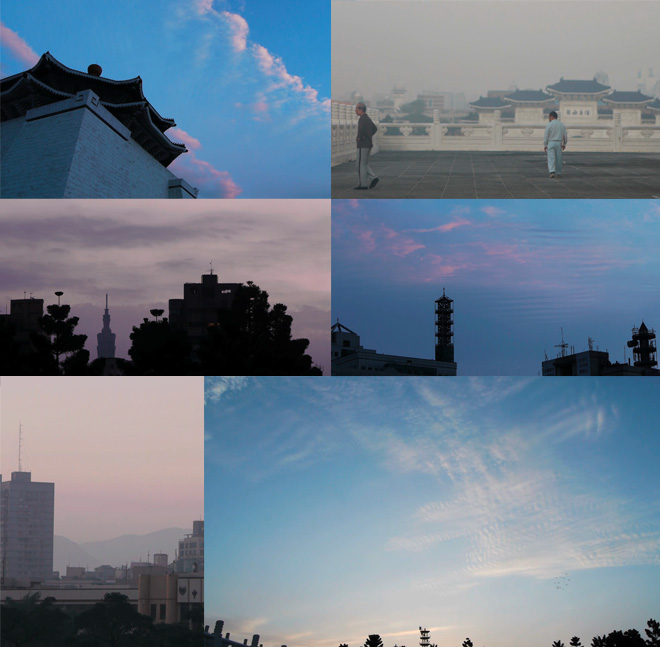 I am not a big fan of shooting in bright sunlight during normal hours. I find it flat and rather challenging because of the extended dynamic range it needs from your camera, then the changing angle of shadows and light throughout the day gives you continuity headaches. If you shoot in a strict timeframe you know what to expect and what it is giving you.

Much of my passion for DSLRs is because of their high ISO capabilities and fast lenses – shooting at night gives you the ultimate in directional key lighting and shadows, tons of texture and variation – all for free for the curious… Plus you don’t get continuity issues even over a 4 hour shoot because the electric lighting is static and the sun is ever moving. 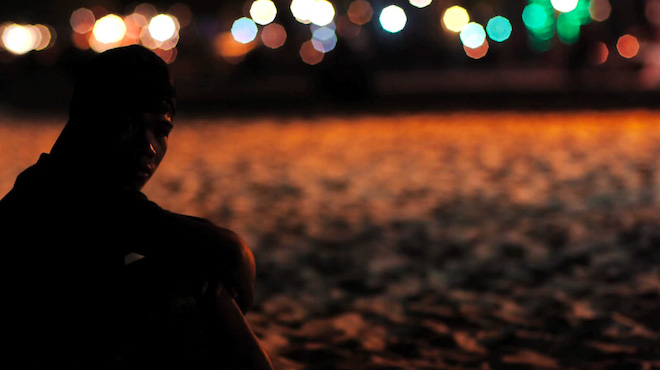 To capture a story you also need to capture the location and it helps to put the same effort into finding cinematic locations with particular lighting layouts which you find appealing. Judgement is critical here, and that is where the gut instinct of a cinematographer really helps. You need to be able to spot the magic when you see it. Be it a shop window casting shadows on the pavement, light diffusing through smoke in a busy city, or branches of a tree making shapes silhouetted against a hazy twilight sky – beauty is in the eye of the beholder.

Just make sure to avoid cliches and be sure the location and lighting present there matches the mood of your content and what you are trying to say through your characters.

The way you grade for night footage is also very important. Especially on the cheaper cameras. If you lift the blacks on a 5D Mark III or a GH2 they won’t be clean. It is better to crush them and ramp the contrast up, whilst exposing at the time of the shot to bring out as much shadow detail as you want to capture, that you feel is important.

There’s a lot of nasty stuff hiding in the shadows on most footage, even on the better DSLRs like the 5D Mark III and GH2. The FS100 is much cleaner in that regard. Certainly, raw shooting cameras like the Alexa can be pushed to extremes and dark areas brought up far more than a DSLR. But that is usually to compensate for an error in the lighting or an extreme situation. It doesn’t always make for a better looking scene.

Here’s the 5D Mark III with a lot of junk on the left and the FS100 on the right boosted by the same degree. So clean in comparison.

Even though it is AVCHD, it is a far better codec than on other cameras around the same price point.

If you don’t feel like you can capture the detail in the shadows without burning out the highlights, you have to make a choice. Don’t attempt to boost something which is half baked, when all the data isn’t present because of the kind of mosquito noise and macro blocking you see above. Instead, crush the blacks if they look bad. If your highlights look bleached and ugly, blow them out. Otherwise one of the aspects or even both will look bad and that is 50% of the appeal of your shot! Kubrick had a great knack for blowing out windows in a shot, indeed had a preference overall for blowing out highlights rather than keeping the bleached half baked detail.

Lighting is both the natural, and the controlled studio environment

The recent Zacuto Shootout made a lot of lighting, but fails in its entirety to mention natural light. In a camera test studio Arri lights are important because set lighting rigs you can control, the sun you can’t. But the message is lacking in it’s philosophy. Shooting in natural light outdoors is such an important filmmaking skill.

Often for low budget shooters, it is MORE important than set lighting, and certainly for larger subjects it makes a larger overall impact (and a more varied one) than portable lights you can carry around in the back of a van. Always bear in mind that when someone says lighting or content is king, don’t think in the simple terms of electric lighting in a room and words on paper. Filmmaking is far broader and more elastic, so think differently.